Restrictions on permits, the land that changed its name and the tale of the forbidden electricity

05:40  We arrived at Jayous by car, and from there with A., a friend from Jayous, to the Falamya north agricultural gate.  Ten farmers and one tractor already waited.  The farmers told us that the checkpoint now opened earlier, at 05:45, which is why they’re here, unlike what the DCL told us two days ago.

A common complaint: During the summer, when it’s very hot (35 degrees centigrade), the farmers want to return home earlier, and must wait from 15:00 untill 17:00 for the checkpoint to open, although they had to arrive at 05:45 in the morning.

The Palestinians also ask us to help with their request to open the checkpoint earlier in the afternoon, at 16:00 at least.

The permit situation in recent months has been particularly depressing: Many farmers whose permits were cancelled or had expired still haven’t received new ones.

Two “Internationals” join us to observe the checkpoint – one from England and the other from Switzerland. They’re members of the Tul-Karm group, which is keeping track of restrictions on Palestinians at the agricultural checkpoints and the border checkpoints in various locations, and publish reports and witness accounts.  They conduct accurate counts of the number of people going through.

05:45  The checkpoint opens.  Two teams of MPs inspect permits and ID cards.  No one is turned back.

Our friend A. had to leave because he was notified that his grandson had an accident. We join the Internationals to go to the next checkpoint, Falamya south.

This checkpoint also opens earlier now, at 06:30.  The soldiers open the gates and let the farmers through as they arrive, most on tractors carrying 2-4 people each, because their groves are apparently far from the checkpoint and they want to save time.  About 30-40 people crossed in 25 minutes, after inspection.

The soldiers drive to open the Jayous South checkpoint, in the south of the village – it’s hard to get there at the same time as the soldiers.

Later our friend A. told us that it is a checkpoint used primarily by 2-5 farmers, shepherds and owners of land nearby.  He says it opens for 15 minutes each time.

07:15  We return to our friend’s house to ask about his grandson. The accident, in which a tractor overturned, was minor. Two young men riding on it narrowly escaped. One was bruised, the other sprained his arm and required stitches in his forehead.

Our friend and his wife invite us and the two Internationals to a hearty breakfast. We again hear the stories of the theft/expropriation of land and the bureaucratic obstacles to improving the water supply.  Our host owns 18 dunums that hd been beyond the fence, and were returned with 2000 more dunums when the fence was moved following a Supreme Court decision (6000 dunums still remain in the seam zone). He inherited the land from his father, along with a well, located on the land, that supplies some 100 farming families. His land is near two other plots that one Palestinian sold twenty years ago to a land dealer, who had purchased them for settlers from Tzofin.  Four years before the fence was moved a representative of the Civil Administration showed up – a man named Itzik – and told him the land was state land.  It turned out that in 2006 the state decided to expropriate the land in order to expand the Tzofin settlement, and arbitrarily changed the original identification number of the plot from 686 to 788. He sued, via the Palestinian Authority, and proved in court that he owned the land and that it wasn’t plot 788, which maps and aerial photos showed had been located two kilometers away.  But the Civil Administration uses its bureaucracy to continue harassing him.

The tale of the forbidden electricity

The village decided in recent months to install electric metering of the use of the village well (located on A.’s land) in order to prevent unauthorized use and enable a better allocation among the farmers.  To do so they began to dig foundations for electric poles, 11 of which cross A.’s land, on the way to the well.  The Civil Administration won’t give up – it persists in its arbitrary, false determination that the land is plot 788, and no aerial photos or deeds make a difference. A week ago the Jayous municipality received a stop-work order for the 11 poles, claiming they are being erected on state land.  Now they again have to engage in a legal battle, contact the Palestinian Authority to represent them before the Supreme Court, and our friend is handling it for the municipality and is in contact with an organization in Ramallah that deals with Palestinian rights to land.

It’s unclear whether justice will triumph.  But the Palestinians aren’t willing to give up, and rightly so.  They want to preserve their lands and continue their struggle against the expansion of settlements – Tzofin, in this case.

And regarding the permits:  I spoke again with M., who’s in charge of organizing the applications of the village farmers.  He says nothing has changed this week.  As of today, only 5 permits were received out of 60 applications submitted since the strike has ended – two permits for two years and three permits for two months – all to landowners.  He issued instructions to stop accepting applications until things become clearer, and they receive responses to applications already submitted.

09:15  I went through a flying checkpoint inspecting IDs of people leaving ‘Azzun.

With hopes for the end of the occupation and justice for the villagers in this area. 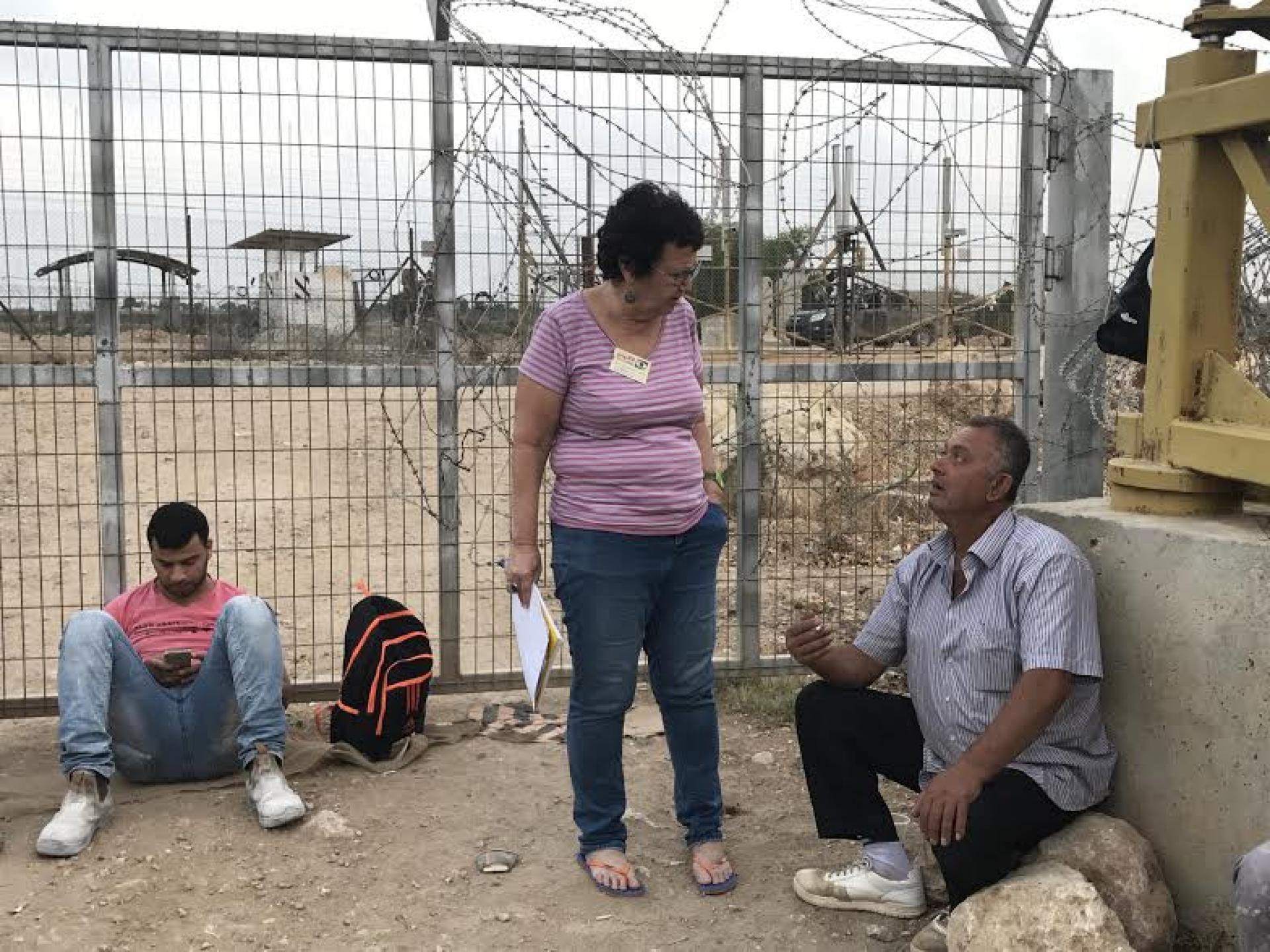