15:30  A-Ram CP:  One pedestrian and a small number of cars were at the checkpoint.

Driving to Qalandiya via A-Ram, we saw that volunteers from overseas had conquered almost all the graffiti area of the "Wall" erasing Palestinians messages and covering them with birthday wishes and slogans against the light-rail company.  Where is their respect?

15:45  Qalandiya:  Two passageways, 1 and 4, were open.  There were very few people in the CP at this hour and no one at all was waiting in the DCO shed.
(
16:10  Vehicle CP:  The CP was working as usual.  The "Canine Patrol" (employees of a private company called K9) were not present.  Instead, a detachment of IDF photographers was taking pictures of the scene (perhaps the presence of photographers generated a more relaxed atmosphere?).

16:40:  From the distance we could see that the line of vehicles at Atarot CP was very long, reaching as far as the horizon.

On our return to the pedestrian CP we saw that one of the female soldiers on duty in Passageway No. 1 was quite tired and had draped herself across two chairs while playing with her cigarette lighter, desultorily trying to ignite her computer screen.  Just as we took her picture, she turned around and discovered that her behavior had been recorded.  Naturally she ordered us to give her the camera

.  We refused the order and telephoned her commanding officer.  Following another call to him, Hanan asked us the name of the soldier but we could not give it as the soldier was not wearing a name tag.  When the soldier realized what was happening she quickly pulled her name tag out of her backpack and put it on.  Which is how we found out that all the soldiers have name tags that they are supposed to wear and that the soldier's name was Noa.  At this point a policeman called Ron C. arrived at the post.  After questioning us about what had happened he sent us on our way with the camera in tact.

17:00  We emerged into the northern entrance to Qalandiya CP and found a crowd of 40 waiting outside the first carousel.  The two open passageways, 1 and 4, were full and working very slowly.  We phoned the humanitarian hotline and the CP headquarters and waited until we saw that things were beginning to move.

17:25  Rafat (Bir Nabala):  We were still quite far from the CP when drivers coming towards us stopped us to say that things were bad and that the CP was closed.  When we arrived we found a line of 32 vehicles.  An officer on patrol stopped to tell us that the length of the line was the result of an "incident" that had caused closure

of the CP (he did not provide details), but that now that the incident had been resolved the CP was open once again.  He proved to be right - the soldiers waved the vehicles through very quickly.  Entry to Bir Nabala was open to all.

17:45  Qalandiya Village:  We met the Mukhtar of the village who told us that he expected shortly to hear the decision of Israel's Supreme Court on the village's appeal for a gate in the Wall.  From his house at the edge of the village we could see that the line of vehicles at the
Atarot CP (several yards away) was still quite long and tedious.

18:15:  We returned to Rafat CP and found that the line was stable at 10-12 cars.  At any one time there was always one minibus pulled over at the side of the road while the soldiers inspected the ID cards of its passengers.  When they sent one minibus on its way, the soldiers would immediately detain another.

On the way to Hizmeh we got stuck in a giant traffic jam.  At the entrance to Hizmeh Village we discovered that the jam was the result of a horrible collision. 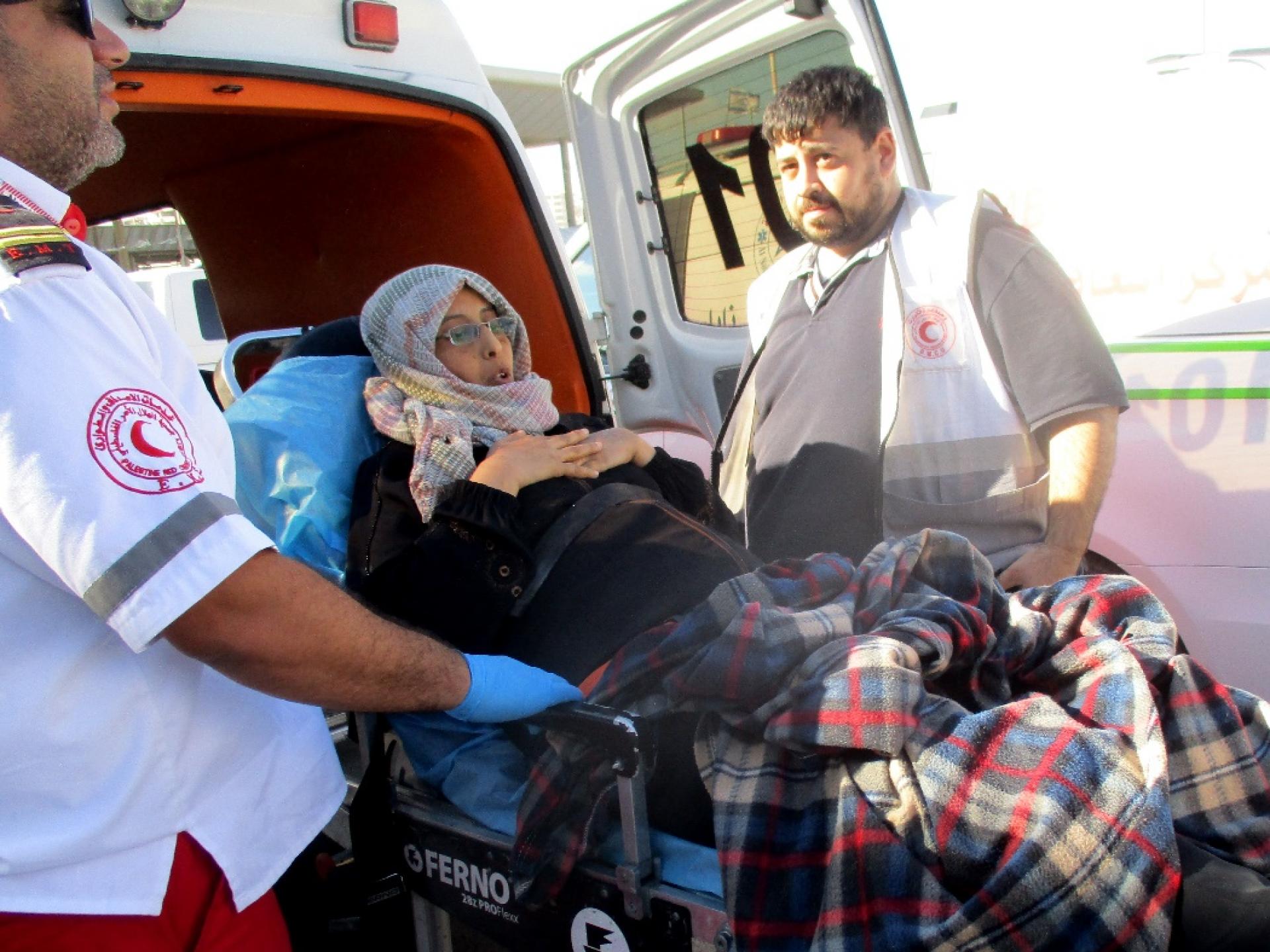 A cancer patient from Gaza