A morning of tension and grievances

Not for the first time we note that the Qalandiya checkpoint is not built or equipped to handle the number of people who may pass through it on a standard weekday morning on their day to work, school, in addition to hospitals, etc.

When we arrived at 5:20 a.m., the lines were already extending beyond the shack into the parking lot. 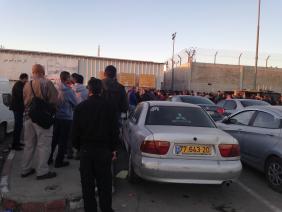 In the shack, only four of the 12 ceiling lights were working and some areas were totally darkened.  All five checking stations were open. Timing the opening of the turnstiles leading into them,  we found that they opened between 45 and 50 seconds to allow in three people each time. 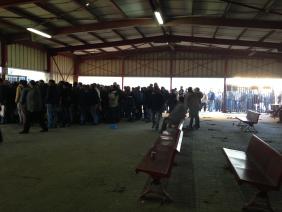 Nevertheless, when followed a randomly chosen man from the end of one of the three lines (deep in the parking lot) at 6:30 a.m., we found that it took him 45 minutes to reach the turnstile at the entry to the checking station he chose. It shouldn’t be surprising, therefore that we heard no few expressions of anger and grievance during the three hours we were there.

The Humanitarian Gate operated between 6:15 and 8:15, opening at segments of 5-10 minutes, depending on the number of people who gathered at the gate.