There are no queues. At the car checking area there is just one car.

We went down to take photos of the landscaping, in which so much had been invested. Two security guards identified us from afar and, holding their weapons, they hurried in the direction of the law breakers. I managed to take a few photos until I met with the security guards. A conversation ensues in the manner known from recent times. It is forbidden to photograph here. How is it possible that this is a military area if Palestinians pass through it day by day. What could be secret about gardening? After all the regional development in the style of Gaudi is so impressive. A senseless conversation. The youngsters recite what was taught to them. 3 other security men join them, as the problem seems real and they need reinforcement. Five young men vis a vis two women say again and again that it is forbidden to take photos – even of the gardening.

We decided to leave. 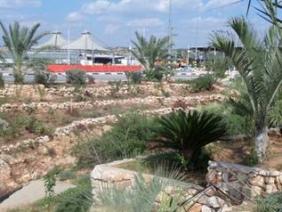 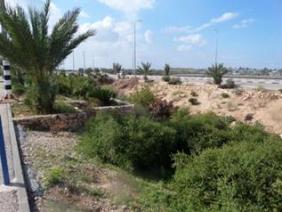 Two days ago it was publicized that a man had been wounded in a stabbing terrorist act at Nebi Eliyas when he stopped to make purchases. We tried to find out what had happened. From the locals we heard that he tried to steal a car. We couldn't find out what really happened there.

At the entrance there is no military vehicle. At Z.'s shop we hear about the stabbing event at Nebi Eliyas, where people from Kalkilya attacked an orthodox Jew (identified by his outfit) who owes them money. That is what they declared at the Palestinian Authority. No religious or nationalistic motivation.

Habla  - A visit to the plant nursery

Here we hear a story: A  young girl from Kalkilya, who got engaged not long ago, arrived yesterday (9.11.2015) in a taxi at the Eliyahu CP and proceeded to walk straight on, as she didn't know that there was a pedestrian passage. The security people screamed at her (naturally. How is it possible otherwise…). She stopped without understanding what they wanted from her. Confused, looking around her, not understanding…  She took 17 bullets. For the security personnel there is no economizing as far as bullets are concerned. The army claims: 2 knives and a suicide letter were found on her. The Palestinians claim: that's a lie. It is impossible.

A. has a splint on her palm because of an inflammation. In the splint itself a metal wire is threaded through to shape it. He showed it to the inspector at the CP and was required to undress. He refused. Why exactly must he undress? If you'll force me I shall leave here naked, he threatened. They agreed that he should remove his belt and shoes only.

The gate was opened on time. They enable the passage first for those leaving the village.

13:20 The first group of five leaves and after five minutes a second one. 11 people wait to pass to Habla as well as a van, a cart drawn by a horse, and a private car. An elegant white Toyota car with yellow license plates enters and stops on the administration road. Soldiers emerge from it. Reinforcment for the military policemen.

13:30   Only now do they enable the entrance and the first quintet enters into the checking post.

13:40    The last three people enter. A car, to which a cloth covered cart is attached, is waiting on the administration road but is forced to return in the direction of Habla. We cannot understand why.

After the plant nursery van leaves, the children's bus and two private cars leave at 13:45.

13:45We return to A. but a meeting of the plant nursery owners is being held in his hut.