Place:
Jubara (Kafriat)
Far'un
Tags:
Seam Zone
Palestinian farmers
Staying Permits in the Seam Zone
Observers:
Miriam Shayish, Micky Fisher (reporting):
Sep-8-2015
|
Morning
07:20 We arrived at the Far'un CP by way of the Te'enim – Jabara CP. The CP was supposed to be opened at 07:00 and about 80 farmers crowded together in front of it, some near the gate and others sitting on the side.
Beyond the gate we saw the military jeep and next to it military policemen.
The gate from the direction of the village was locked with a simple lock. The Palestinians, amongst which there were some farmers we knew, explained to us that they themselves had locked the gate as a protest, and had declared a strike until all the farmers got permits to enter their lands. According to them, during the last two or three months, many farmers had repeatedly submitted requests for the renewal of their permits, but up till now they had received no reply. 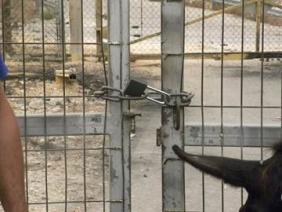 The Palestinian farmers had, at their own initiative, contacted the Palestinian DCO, whose officers had not yet begun to work at this hour of the morning, as well as the Israeli DCO, and they also approached the military police soldiers with the demand that the Israeli DCO officers, who are responsible for the dispensation of the permits, come to talk with them.
They asked that we too report on this. We contacted N., the woman officer of the Tul Karem district, and reported the strike and conveyed the Palestinians' request. Her reply was that we were encouraging the Palestinians to strike and to take action towards the improvement of their situation, and that she wasn't willing to cooperate with this. I made it clear to her that we were just reporting on the situation and that the Palestinians didn't need us in order to express their protest and to act as they see fit – they are flesh and blood like us and like the DCO officers and in the ongoing situation they surely had reached the end of their tether.
The DCO officers probably thought the matter over, or perhaps they were already on their way, when they understood that it would be best to pacify the situation. 20 minutes later the white DCO jeep was seen approaching the gate, and the DCO representatives emerged from it. 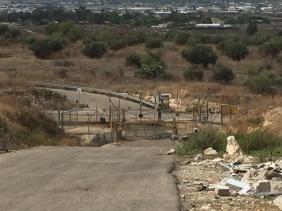 08:20 – One of the Palestinians took a hammer and simply broke the lock and approached the DCO officers. It seems that their first reaction did not satisfy the  Palestinians, as 5 minutes later another lock was procured and the gate was locked again.
08:35 – 3 DCO officers went to the gate and talked to the farmers. This time the Palestinians opened the lock, and their delegation went to talk with the DCO officers and with the army. Then the farmers agreed, according to them, with the DCO officers that anybody who is an owner of land and has not yet been accorded a permit should register with W., the person at the DCO responsible for the dispensation of permits, who was present. They were also promised that whoever wouldn't get a reply or a permit a fortnight after the submission of the request to the Palestinian DCO, would go and arrange the matter directly at the Israeli DCO. As one of the farmers reported to us, they asked that sheds should be built for them as a refuge from rain and sun, on both sides of the CP. They were assured that their request would be considered and that they would endeavor to build sheds for them. Let’s hope!!
08:45 After these understandings the Palestinians opened the gate, arranged the queue for the farmers, and whoever had a permit entered by the gate, his permit and papers were quickly checked and within 25 minutes all the farmers who had a permit passed. The others who had no permits returned to their homes, probably hoping the their matter would be resolved in the next few days. The soldiers and the DCO officers locked the gates

of the agricultural CP, which separates the lands of the seam-zone from the Palestinians. So this is the situation, until the forthcoming round and the next frustration.
09:15 We drove to the local village council. There A., the clerk responsible for the submission of the authorizations to the  Palestinian liaison, told us again the many farmers who own lands from 30 to 120 dunams were not granted authorizations since many months and thus are unable to perform the seasonal work. The land produces thorns and thistles and often their plots of olive trees are burned down owing to the blazing summer heat.
A. promised to prepare an orderly list of land owners and send it. In the meantime we heard that some farmers got permits, and the list will probably arrive only on Sunday or Monday.
As the DCO officers celebrate the Jewish holidays, including the Sukkot mid-holidays, the DCO will be closed from the eve of the Atonement Day until after Sukkot, and the permits that are so urgently needed for the olive harvest will probably be delayed.
Perhaps there will be some good will and consideration for the overlapping of the holidays and the beginning of the olive harvest - once it used to be possible to talk to the head of the civil administration about the olive harvest, but slowly the occupation, acting as force majeure, creeps and settles and robs the olive plots of the Palestinians. 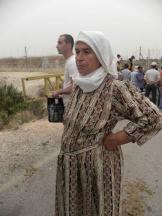 10:15 Jabara
We arrived at the donkeys' recovery ranch – the Europeans donated 4 ranches all over the West Bank, to which sick horses and donkeys are brought for rest and convalescence. The owner of the place told us that a veterinary arrives every week from Bak'a El-Garbiya to examine the animals and he himself grows near the ranch za'atar and parsley on a plot of about 2 dunams.
10:25 – three family members from Jabara who own 20 dunams did not receive permits for the Far'un gate. They submitted a request on 17.8.15, but an inquiry with the DCO officer showed that their request hasn’t reach the Israeli DCO, or has reached it and somehow got lost on the way. I informed the head of the family, who submitted new applications to the Palestinian liaison, and hopefully those will arrive before Sukkot.
10:50 We left again by way of the Te'enim-Jabara CP which was manned by military police – they asked cynically whether we enjoyed ourselves and asked for another photograph… Luckily one can sometimes amuse oneself in the occupation…