We also met there people from the Daharma organization (who are assisting residents of Deir Istiya) and a representative of Israel Social TV.

After reading Amira Hass’s column in Ha’aretz, and after Dvorka’s call, we decided to join the protest by residents of Deir Istiya planned at Wadi Kana.  We arrived at the outskirts of the village at whose entrance is a double-arched gate, as though welcoming us, come, enter.

Instead of an assemblage we met Z., one of the protest organizers, a pleasant, welcoming person, who was glad we came and invited us to join the caravan to the nature preserve.

The village itself, to the degree we could see as passing visitors, is clean and well taken care of.  The nature preserve is located a few kilometers from the village along an obstacle course.

About 100 people participated in the demonstration, most of them young men with fashionable haircuts.  We also met the head of the village.  A young, unbelievably energetic woman.  One demonstrator told us that prior to the municipal elections they decided to rotate the chair between two parties (the Popular Front and Fatah) in order to prevent a third party from succeeding.  The first head was from the Popular Front and now a proud, energetic woman is in charge. 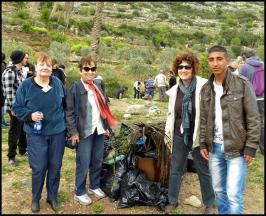 A large sign was unfurled at the demonstration in opposition to the settlers taking over the nature preserve.  The only word we understood coming over the megaphone was Netanyahu, and what we know about him, they also understood.  For a long time.

After the photographs, garbage bags were distributed and we all began to collect garbage of unknown nationality, to signify this place belongs to them.

One demonstrator told us he descends daily to the wadi and runs into a settler who arrives on a dune buggy and cleans the nature preserve.  That’s his job, apparently for pay.  The Palestinian helps him, for free of course.  He tells us he likes to be there.  This is his home, and anyway he’s unemployed and has time.

Two children on the road sell lemons, four kilos for 12 shekels.  We’ll sweeten a bit the sour visit when we make lemonade at home.

My conclusion, as one who came only for a short time, and who has no pretensions to understand more than she can see with her own eyes:  Many dunums were stolen from them, but the nature preserve is an expression of the battle for their home.  They’ll continue it.  They won’t relinquish it.

And over everything, like a lord observing from above, rises the Revava settlement, as if to say, let the children play, hold their demonstrations, have their picnics – the power, the authority and the control are, of course, in our hands.

Now, more than ever.

Residents have received expulsion orders from the Civil Administration because they were present illegally in the Nahal Kana nature preserve.

If they don’t remove them within 48 hours, the violators will be subject to arrest and jail and/or fine.

Removal orders were served on four village residents regarding 422 trees planted on their lands.

They contacted attorneys in order to appeal.

According to the map, the wadi is surrounded by settlements:  Revava, Yakir, Havvat Ya’ir, Al Matan, Nofim.