10.30 – 16.30 We visited three villages in the known Salfit-Deir Istiya region and Kafr A'Diq and Sarta, a small and special village the entrance to which is through Bidiya. At Azzun Atma "we discovered" a new iron gate in the wall, exactly opposite the access road to it from the square on the way to Oranit settlement. The gate is opened twice a day, at 06.00 and 16.00. We visited the bus terminal at Oranit.

11.30 We arrived at Deir Istiya by way of the new arc-gate whose construction has been completed lated, and which has the Palestine flag engraved in the stone at the peak of the Arc. Only lately the obstruction which prevented the entry and exit from the village has been removed. 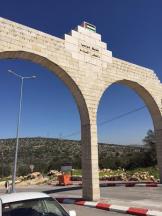 Again we did not succeed to meet the head of the village who again wasn't present in Baladiya.  She went to visit her son who is detained in Salem.

12.45 Sarta. After straying on the old roads between Dir Istiya and Hares, we found our way to Sarta thanks to the wonderful instructions of Nadim. When we reached the council building in the center of the village we met an elderly man M. who, as an answer to our question, assisted us in parking, led us to the council offices and saw to it that we were received officially and warmly.

We went up with him to the council offices and after a few words and hints he dispersed to the men who were present there, the door to the chamber of the head of the council was opened before us and M. brought with him two other men. We all sat down for an acquaintance meeting and for a fascinating conversation on the future of the two peoples in the region. On the prospect and risk of the involvement of world powers in the conflict and on the great apprehension that that only terribly violence and more wars will bring the two sides to agree to a settlement.

In the course of the conversation we learned about the village and its distinction. The village comprises 3000 inhabitants which belong to five families. Most of them are educated and they are famous for that (at the village of A-Diq they also pointed out that this village is renown for the cleverness of its inhabitants and the number of educated people in it), they comprise many medical doctors which could run an entire hospital in the village, but in today's actuality most of them are dispersed in the different towns of Palestine and in the Gulf States. Those who live abroad are also very attached to their families. The economic situation of the village is relatively good and thanks to their relatives abroad many of the houses are beautiful and well groomed.

Two of our interlocutors are prevented from working in Israel, after one of them had worked in Israel as a contractor for 40 years. They were happy to get from us the details of the communication with Sylvia.

We learned from them about demolition decrees for 10 houses in the village which had been built on lands belonging to the families in Zone C, about the molestations of the settlers from Baruhin, and about their apprehension from further expansion plans of the occupiers by changing the delineation of the access roads to Sarta and Bidya.

We asked whether there existed a women's club in the village and were told there wasn't one, but they were interested to hear what we had to say about the sea days. We promised to keep in touch.

14.00  Kufr alDik. We arrived at the house of our old friends with a few sacks of clothing. H., our friend, who is member of the town's council, cares for needy families, and asked us again to organize a trip to Israel for a group of seriously sick people, as we did two years ago.

This was a sad-happy visit. It was happy because we were hosted at the new and beautiful house of the family. Sad because by peeping from the house windows one sees clearly how the settlements close in on the lands of the village all around. From the bedroom window our hosts showed us the new houses of the Barouhin settlement, and from the kitchen window the ongoing  expansion of the Leshem Settelemtn which is being built on the olive groves area of the village families.

When we left on road 446 in the directionof road no. 5 we saw along the route military vehicles and soldiers – who seemed to be reservists – walking on the agricultural area east of the road.

15.30 Oranit Terminal.  It seems that because of the early hour there were no Palestinian workmen around, and we couldn't find out how they would travel from Oranit to their homes.

15.45 A new gate to Azzun Atma.  From the entrance square to Oranit we descended on the road which leads to the wall which has been splendidly completed… 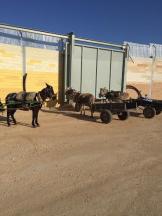 In front of us is the enormous iron gate (and next to us the signpost "Haim Landau Road"). A few Palestinians who waited on the side, told us that they were waiting for the opening of the gate which is intended for land owners and is opened twice a day. At 06.00 in the morning and at 16.00 in the afternoon.

This is in addition (or perhaps in place of?) the small gate which is situated in the fence which is the continuation of the wall. We saw that gate when it was opened at noon when we visited there two weeks ago.

We tried to drive along the wall on the security road which is bordered on its other side by an involuted wire fence. Within a minute a military command-car arrived. We moved away before the soldiers had a chance to prevent us to continue on the forbidden road. In the meantime, in the shed on the side we saw another group of Palestinians, full of humour and self confidence. They were glad to talk with us. It transpired that they were building the wall, the roads and the rest of concrete and cement. They joked about the fact that they are building the country… and they also said that the iron gate isn't opened on the exact hours which were fixed. We too witnessed this, as at 16.15 the soldiers hadn't arrived to open it.