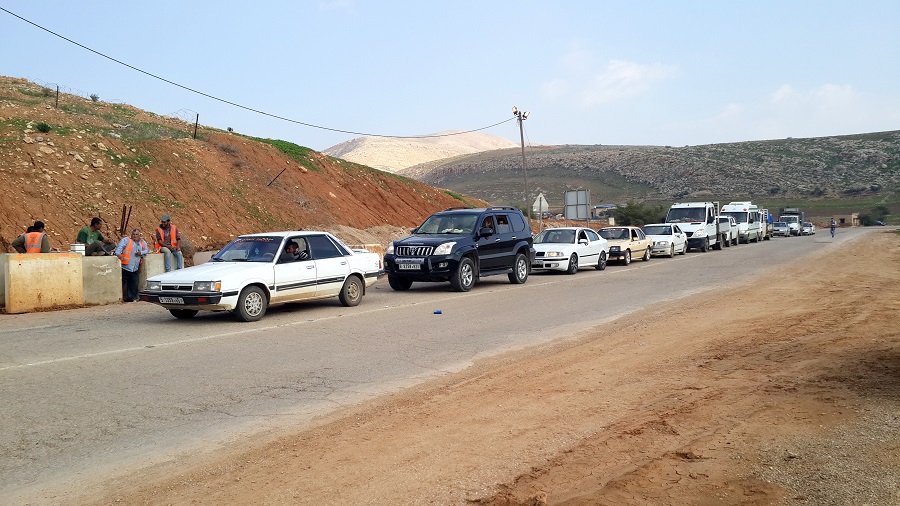 A long caravan welcomes us, 14 cars waiting to cross from the east (Jiftlik) to the west (West Bank).  The drivers tell us they’ve been waiting between half an hour and an hour.  The soldiers worked fast; it seemed to us the crossing went quickly and took less than half an hour, but perhaps the rate increased after we arrived.  Anyway, there’s heavy traffic toward Nablus at this hour, so there are many cars at each moment.  A Palestinian is cleaning the checkpoint, collecting garbage in a bag.  In the morning he works in a date packing house in one of the settlements and comes to clean the checkpoint in the afternoon.  He says the soldiers are very good, without being asked.  He obtained the job through Captain M. from the DCL. 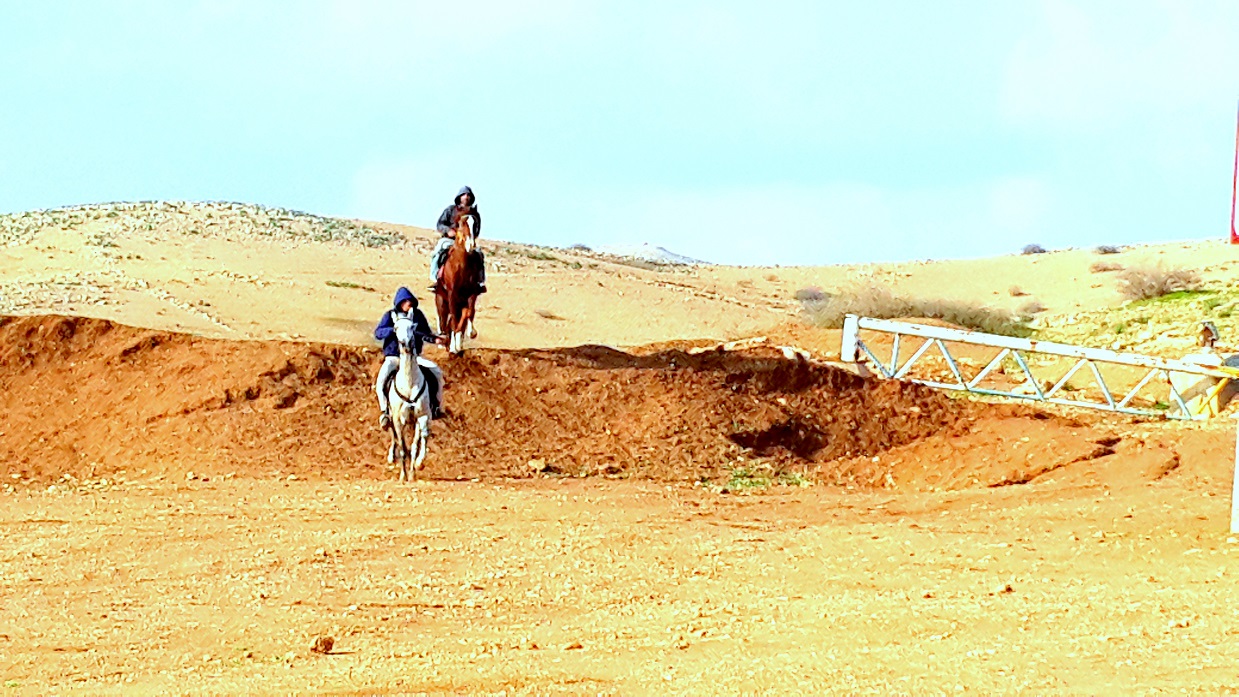 Dangling and locked.  An earthen berm on each side stretches along Highway 578/the Alon Road and even though the rain has worn it away it blocks free access to vehicles in the Jordan Valley and forces the Palestinians to cross only at the checkpoints.  Really?  Two youths on very impressive Arabian horses galloped lightly over the berm, stopped willingly for a photograph and continued, pleased.

15:00  Tayasir checkpoint
We found a quiet, empty checkpoint which for a moment seemed deserted, against a background of hills and rises turning green.  Ten minutes later a number of vehicles arrived from both directions, soldiers appeared, let them through almost immediately.  Then a pickup truck arrived heading west toward Tayasir.  Its bed was covered with a tarpaulin but one edge was folded back and you could see passengers and something that looked like a large, blue container.  The soldiers began inspecting documents and suddenly some incident quickly developed between them and two of the passengers, or the driver and a passenger.  A loud argument began when the soldiers ordered one of them to go to the inoperative pedestrian station, pointing with his finger, including a brief chase of another who ran toward the station as if something had happened there.  More soldiers descended from the pillbox and joined their colleagues who surrounded the Palestinians at that station.  It seems the soldiers don’t know how to solve the situation, one spoke on the phone, perhaps requested/received instructions.  The crossing shut down and many vehicles began accumulating on both sides, most transporting laborers who’d finished working.  The pickup moved to the side and all its occupants were detained.

At 15:30 vehicles began crossing again; the lines quickly disappeared.  A passenger in one of the cars that passed us called out:  Someone’s fainting there.  At some point two soldiers approached us to indicate the imaginary line we’re forbidden to cross.  They wouldn’t tell us what was happening.  The pickup eventually disappeared, replaced by a bus which had just arrived and was sent to park on the side.  The passengers’ IDs were collected.

15:40  The passengers were ordered to get out and stood in a line; their IDs were returned.

We don’t know what happened to the two Palestinians in the pickup truck.