07:00  After repeated complaints from Palestinians regarding the length of the vehicle checks at this CP (which today is called a "passageway", and has been privatized), we came to observe at close quarters what is going on.
The Hashmonaim CP is an entry point from the northern West bank into Israel.  At the CP a new, experimental device for checking car interiors, called "the straw", has been installed.
We met M, the Security Officer, who welcomed us and answered our questions.
The vehicle CP is meant for drivers and their vehicles only, other passengers must use the pedestrian passage.
The driver exits the vehicle and goes with his belongings, for a rapid check by magnometer in an inside room.
Afterwards he waits outside, within the CP area and next to the cars, for the "straw" test to be completed and analyzed.
The Palestinians with whom we spoke complained about a sense of humiliation at the procedure, and about its length.

Checking vehicles with the new equipment -- "the straw". 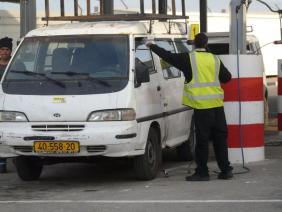 A slender tube is inserted into a crack in the front windowpane, scanning the the car's interior and contents.  The goal is for the straw to draw in particles, which another machine might identify as evidence of explosives or similar materials in the car.
The procedure lasts about 4 minutes, and the analysis about 10, totaling 14 minutes.
There are 20 checkstations, but only two were active.
When cars enter for the check, they line up one after the other, and the straw passes from car to car.  The cars are not released in sequence, but rather the entire queue waits for the analyses of all their interiors, and is released simultaneously.  An entire lineup of cars exits the testine area.
All the checked cars belong to Israeli Palestinians carrying Israeli license plates.
We could not receive an answer to our question whether the check is universal, or selective (these are top secret security matters ...).  All, obviously, are Israeli residents.
We observed one Palestinian woman whose car was tested.
We observed a car who was diverted to the side and subjected to an additional security check, including passing a mirror on its underside, and having a dog sniff it.
We saw no Israeli Jews being checked.
We observed that all heavy trucks pass in the free lane without a check ...
The straw, as we stated before, is new and experimental, but is already operational in the Shaar Eliyahu CP.
We got the feeling that our presence expedited the procedure.
The Palestinians who were done and exited the CP with their vehicles stopped to tell us that due to our presence, the procedure was much faster today than usual, and requested that we come daily!
It didn't matter at what time, because the delay was a function of the method, not of traffic pressure.
Since we know that any Palestinian with Israeli residency can enter via the Qalandiya CP (which is no picnic either), or Hizme CP, we realize that the security system has gone haywire