Another difficult morning at Qalandiya.

We arrived at 05:20 to find chaos outside. We heard yelling, saw drivers who’d left their cars in the vehicle lane and begun fighting with one another. The loudspeaker called on them to return to their vehicles; people attempted to separate them. 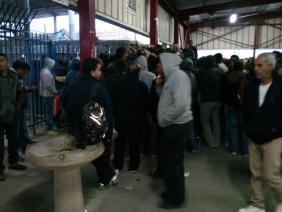 The lines to the pedestrian crossing stretched to the parking lot. As we approached the entry they opened the revolving gates

; we heard shouts and the lines turned into one huge mass of people pushing forward, trying to shove into the fenced corridors. People pushed, yelled, climbed the fences trying to squeeze in from above, banged on the metal partitions separating different areas of the crossing. It was simply terrible, and remained so for more than an hour. The result, of course, was that many people, and particularly those who were older, moved aside to avoid being crushed. We asked people why on some days (like last week) when people stand in three organized lines and advance slowly toward the revolving gates, and some like today when everyone shoves. They say that when the line moves at a 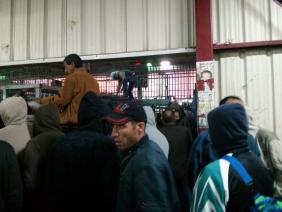 reasonable rate people wait patiently and advance in an orderly manner, but on days like today, when the crossing operates very slowly, an insufficient number of booths are open and people are let through very slowly they lose patience, fear they’ll be late for work and start shoving. We heard many complaints about a long wait: one person has been there since 03:45, another since 04:30 and the line isn’t moving. They said it was like this yesterday as well; one man was crushed and collapsed, and had to be evacuated by ambulance (cf. the report by R., our colleague, from 25.3).

When we entered we saw that, in fact, only three booths were open, and worked very slowly. We telephoned the DCO. The noise was so great we couldn’t hear their response, but we reported what was going on. Many waited at the humanitarian gate; their number increased constantly. On a day like today they’ve no chance to join the regular line. After a few minutes we noticed that a boy in a wheelchair was among those waiting, with his father. The boy’s bandaged leg was raised. We telephoned the DCO again, told them about the boy and couldn’t hear the reply. But a few minutes later we saw the boy and his father had been admitted (we didn’t see who let them in), but they were the only ones.

Booths 4 and 5 opened only at 05:45, but people still went through very slowly. There was constant yelling, whistling, banging on the metal partitions, and endless pushing when the revolving gates finally opened, one huge mass of people (cf. photos). Security personnel arrived toward 06:00, then lieutenant A. whom we knew from the Bethlehem checkpoint, greeted us and was surprised that no one from the DCO had come to open the humanitarian gate. He said booths 4 and 5 opened late because of a computer problem. Later in the morning, long after the humanitarian gate had opened and congestion eased somewhat we heard the noncom from the DCO speaking with people from “Human Rights Blue and White,” saying he wasn’t aware of any computer problem. He said the booths hadn’t opened because there weren’t enough soldiers. We were left with the feeling that the MPs and the DCO staff were each trying to make the other responsible.

06:25 Four young men from “Human Rights Blue and White” arrived. Many people immediately approached them also, complaining about the situation, reporting about the person injured yesterday. Later they spoke to the DCO noncom, and with us.

06:40 The shouting and pushing eased slightly but there are still long lines and people go through very slowly. A few minutes later the lines had become orderly and people now become angry when someone tries to push in from the side.

At 07:00 there was almost no line. We left, got in the car and joined the line to the vehicle checkpoint. Our ID raised a question: the soldier didn’t know how to deal with us. “What were you doing here?,” he wondered. He called a policeman over – “There are Jews here.” The policeman approached, looked at the ID, returned it to him and walked away. The soldier was still uncertain, the security guard didn’t say a word. Another soldier standing farther away, apparently more experienced, said to him, “Women from Watch; you don’t have to do anything.” The IDs were returned and we went through.