Life in no-man’s-land under the Occupation

We decided to take Yael S. suggestion:  we contacted M. from Nebi Samuel on Monday and arranged to meet him in the village.  We drove to Nebi Samuel through Ramot, on the road that leads to the archaeological site.  We turned right in the parking area, onto an unpaved road, and found ourselves in the village – no fence, no checkpoint – encircled by a bunch of children of various ages, some of them a bit hostile while others helpfully pointed out M. house down the road.

M. himself had not yet reached home, but we were greeted warmly by his mother and several brothers who gave us a “guided tour” of their one-room house, presenting us to a sister-in-law holding a tiny baby

to whom she had given birth a few days ago.  We were invited to sit in the courtyard where we were joined by several neighbors who began to tell us stories of life in no-man’s-land under the Occupation.  It’s almost impossible to comprehend what these people are living through, their frustration and hopelessness, and how they somehow manage to get on with their lives.

They told us that there are now 300 people living in Nebi Samuel, all of them in 10 houses most of which have only one room.  Today’s residents once lived in more comfortable houses at the top of the hill around the ancient mosque where the Prophet Samuel is supposed to be buried, but in 1971 they were evacuated by the Israeli Authorities who allowed them to occupy the shacks further down the hill that had been abandoned by Palestinians who fled during the 6 Day War.  The people of Nebi Samuel are not allowed to build or develop their village which is located on land that has been decreed a National Park – they are not even allowed to plant trees (Mr. I., a resident of the village, showed us a copy of a decree 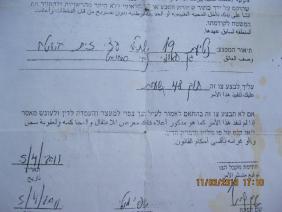 issued in 2005 which prevents planting of trees on the land of the National Park).  When children grow up and wish to marry they must move to one of the nearby villages (Bir Naballa, Gib or Beit Iksa) – returning to their family home only when their parents die.  There are only 11 children in the village school:  4 classes conducted in one room.

I. told us that he had erected a simple enclosure from tin sheets to protect his two cows from the weather.  A soldier came with a tractor and told him that the construction was “ugly” and could therefore be demolished.  No sooner said than done!  Mr. I. went and got assistance from a European organization which helped him put up a new enclosure, small but orderly and “pretty”.  It even has a poster on one wall proclaiming the organization’s contribution.  The soldier returned and took a look.  He told I. that he must demolish the new structure and, if not, he would return with the tractor and destroy both the enclosure and the house of Mr.I. family. I. asked the soldier to give him an official order in writing, but the soldier refused.  For the time being both the enclosure and Mr. I. house are still standing, but the two cows, who spent part of the winter with no protection from the cold weather, have stopped giving milk.

The village stands on an amazing site, looking out over Jerusalem to the east and hills dotted with Arab villages and Israeli settlements to the north.  It’s no wonder that one Isar Orbach decided to establish a private settlement of his own on some of the village land.  He built himself an attractive home, cowing the villagers who are afraid to register a complaint.  They told us that they had seen a report on Israel’s Channel 2 saying that this person has been charged with stealing $7 million from Jewish people whom he cheated.

In the courtyard where we sat, a new washing machine was standing in an alcove built of cinder blocks, connected to the electricity in the house via an extension line lying on the ground exposed to the elements next to the plastic pipes bringing water and evacuating the sewage from the machine.  It was a strange sight and we asked them how they had brought up the washing machine.  They looked at us in surprise and told us there was no problem – there are no checkpoints between them and Jerusalem.  They just ordered the machine in a store and had it delivered to their home as it would be anywhere in the world.  They could even order a pizza if they wanted or groceries from the supermarket!  On the other hand, when I. tried to bring home a gas canister from Ramallah, he had to go through a checkpoint in Gib where the soldiers refused to allow the canister through.  After being detained at the CP for 3 hours, he brought the canister back to Ramallah.  Returning to the CP on his way home (with no canister) he was detained for another 3 hours.  He told a similar story about trying to bring a sack of barley to feed his animals

.  He was not allowed to carry the sack through the CP but was imprisoned for 2 weeks and fined NIS 1,000.

Members of the M. family also complained about the fines to which they are subject.  Although the village is open to Jerusalem, villagers are not allowed to enter the city (without permits), and those caught within the city limits, even in the adjacent Ramot neighborhood, are subject to imprisonment and fines amounting to thousands of shekels.  The only member of the family who has a job (because he has a permit) is the 60-year old father.  All his sons, their wives and children are dependent on him for support.  The sons have all been arrested at one time or other for entering Israel illegally and therefore cannot hope to receive a permit allowing them to work in Israel.  It’s not clear how they pay the huge fines imposed on them when they cannot work.

That, in essence, is what all the villagers asked – that they be allowed to work in Israel, if not in Jerusalem then in the archaeological dig being conducted in their own village of Nebi Samuel.  They said that the dig was being conducted by the DCO office in Qalandiya.

A shepherd who joined us in the courtyard told us that not only Israel but also the Palestinian Authority was not at all concerned with what is happening in Nebi Samuel.  He suggested that the villagers should organize and hire a lawyer to present their case before Israel’s Supreme Court of Justice and demand a solution.

What can we do to help these people?