In preparation of a talk about MachsomWatch for students of the Hebrew University Secondary School (“Leyada”) before their army service, we decided to devote part of the lecture to the absurd situation and condition of Road 443 and take pictures on the way. At the ‘observation’ point of the ‘fabric of  life’ sunken road near the New Giv’on were a number of Border Police jeeps with many officers who very politely asked us whether they could be of any help and warned us not to approach the ‘dangerous’ road.

We tried to turn off at the first exit after the Ofer CP but found that the newly painted arrows on the road led to a fence and stopping was not only extremely difficult, but also very dangerous. 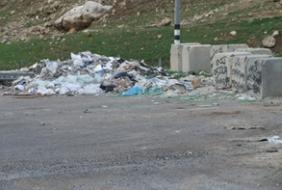 There were some concrete blocks and a huge heap of garbage between Road 443 and a parallel Palestinian road where three cabs were waiting for a chance of a passenger. Two had yellow license plates, but are not allowed to enter Israel (or even the small part of Road 443), the third with a Palestinian license is allowed to travel the few kilometers on road 443, but it is not worth his while because of the hassle of the strict security. His car costs ten times as much as the others, because it is a registered taxi with the Palestinian authority. The other cars are lucky if they make thirty shekels a day. The economic situation is atrocious. 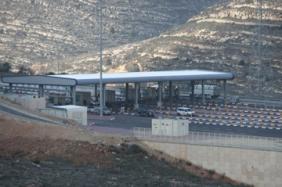 We took some pictures of the construction of the “Institutionalization” of the Kiryat Sefer passage, but unfortunately, because of the long line of impatient cars behind us we were unable to take a picture of the sign which directs “non-Israeli” vehicles to the left (where the passage was closed off) and Israeli vehicles to the right. On the way back beyond the Kharbata (Maccabee) CP there is still no pedestrian crossing at the exit of the road which is blocked off and where many cars were awaiting returning workers. 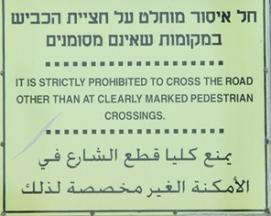 However the sign which does not allow unauthorized crossing is VERY prominent (see picture). And of course no pedestrian crossing exists. We took some more pictures of signs on the road back such as the one for Israelis: If you got here;  you made a  mistake - turn back! And telling Palestinians that this is the last spot they are allowed to turn off from the road.

The Ofer CP now has six lanes and construction is still going on, we took a shot from above from the road towards Givat Ze’ev .