The picture shows an almond tree in blossom at the entrance to Hermesh. 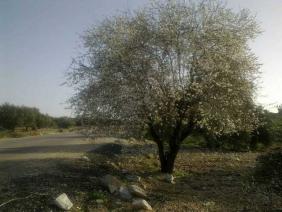 0630 A'anin CP
On the way to the A'anin CP we came upon a temporary CP on the road.  The border police were inspecting vehicles. When we returned the CP was not there any more.

In the course of half an hour we saw them turning away an older women who was limping and had to be supported by two young men. One of the people who went through said that her permit of passage is not valid here. They also turned away another four men. We could not find out why. The rest of the people who usually go through (not many) went through as usual. A resident of A'anin who has a bad burn on her hand waited for the driver who drives the children to school, so that he could take her to the Tura CP, on her way to treatment for her burn.

0705 Shaked-Tura CP
Everybody who arrived went through without delay. The school children happily run up to the soldier and open their schoolbags for him. A resident of Tura who is forbidden passage by the police asks us if we can help him get a release from the limitation. We gave him the relevant telephone numbers. A group of teachers who teach in Umm Reihan (the seamline zone) cannot get to school because the teacher who usually takes them in his car has sold his vehicle. Neta took them to the school and was told that it now has 12 grades; this was not the case in previous years.

0750 Reihan CP
There is no point in entering the parking lot in the car; it is impossible to push a pin into the lot. It looks as if everybody who arrives enters the terminal immediately.

0800 Mavo Dothan CP
On the way there we saw that one of the iron arms that bar the road to TulKarm has disappeared and in its stead they put a concrete hut. The local people have no explanation for this phenomenon. A large dirt road that leads to Ya'abed is now shut off with an iron gate; the story is that this is punishment for throwing stones at soldiers.