Two weeks ago we wanted to go to Ras a-Tira and Ras A-Tiya.  Hisham, our friend, asked that we not come because of an internal family problem involving the two villages.  We only went to Ras A-Tiya, promised to be in touch again and today were guests of Hisham at his home in Ras A-Tira.

12:55  Habla.  The gate is still closed.  Eight people, a horse cart and a donkey cart are waiting.  Eleven people waiting on the village side.  A Hummer arrives; only two soldiers emerge.  The Hummer drives off to get the MP, without whom they won’t open the gates

13:05  A bus approaches.  We watch it curiously and see Daniela and Neta leading a Machsom Watch tour for 23 English speakers – of all ages 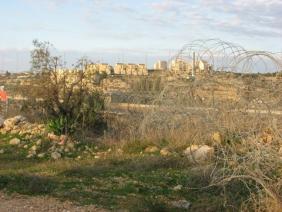 Meanwhile we talk to the two soldiers.  One’s a new immigrant from the US, has been in Israel for a year, the other an immigrant from Ethiopia, five years in Israel.  The exiles ingathered at the checkpoint.

13:20  The military vehicle returns, the MP’s emerge, open the inspection booth.  The first six people go through in a few minutes.  Before we leave I asked the MP whether we can cross to Habla with the car.  He refuses.  I ask how to reach the village; via Qalqilya, he says. 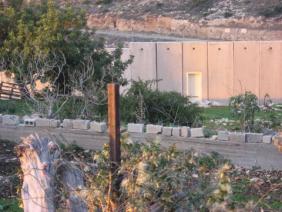 Electric poles were recently erected on private land.  Around each pole, 3-4 dunums of agricultural land were stolen.  The poles provide electricity to the settlements.  An electrical installation was built in the village, in coordination with the Israel Electric Company, based on plans that were approved, on land purchased for that purpose.  All the infrastructure required for a low-tension installation was prepared.  Six months later he was invited to a meeting and told that the Electric Company changed its mind, and wants a high-tension installation.  That means starting over, large expenses and wasted time.  (Tsvia and Dalya were in contact with Hisham and tried to help).  In a meeting at the DCO, representatives of the village were told they would be granted NIS 500,000, but Salam Fayad wasn’t willing to take money from Israel.  Politics.  Today their electricity comes from Habla (low tension), and they’re satisfied.

Hisham had a permit to work in Israel.  It was cancelled in June.  He was told he’s blacklisted, but wasn’t told why.  Four contractors wanted him to work, but he didn’t get a permit.  We gave him phone numbers of MW members who might be able to help.

Olive harvest – 200 permits were applied for (the village has 500 inhabitants); only 76 were granted.  Part of the crop remained on the trees because the gates are closed and the owners of the groves have no way to reach them.  Many residents cultivate lands registered in the name of their father or grandfather.  Some applied for permits through an attorney, submitting inheritance documents but the lands aren’t registered in their names so they’re not entitled to permits.  Most of the lands are on the other side of the fence.  A few received permits for a year, but most got them for only a month even though the groves must be worked throughout the year.  This year they didn’t get help from volunteers during the harvest season.

In November, during the recent harvest, a fire that began near Giv’at Tal and spread south destroyed many of Ras a-Tira’s olive trees.  The Palestinians sent fire engines but the soldiers who arrived at the gate said they’d forgotten the key…the fire continued to spread.  Since most of the residents lacked permits to reach their plots during the year, the groves were full of high weeds and thistles, which helped the fire spread quickly.

It’s been a little quieter recently.  Six months ago the IDF/Border Police used to enter the village at night with sirens and loud music, waking everyone.

The fence is a daily annoyance.  Is it for security??  Hisham asks: if it’s to protect the inhabitants of Alfei Menashe, why isn’t there a fence around Alfei Menashe?  Why do they build fences on private land and separate the village from its lands?  Some 2500 dunums have already been stolen from the residents of Ras a-Tira.  The court ordered their return.  While the fence was moved, despite its promises the army didn’t repair the damage that had been caused.

16:00  We go up to Hisham’s roof to look out over the area, and then he and his cousin take us around.  We see the former route of the fence, before the IDF relocated it.  It was a pile of ruins; the IDF was to have removedthe debris and cleanedthe area.  That, of course, didn’t happen, and the owner of the land cleared it himself and planted new olive trees.  The gate next to that plot is always closed (No. 1327), open only during the harvest season.

We meet the owner of the olive trees that had been burned.  He wants to erect a greenhouse for vegetables on his land.  He received a permit to use the gate that’s always closed…Duh…where are we – Chelm?