Notice that the opening hours of the agricultural gates

have changed. Behavior of the soldiers at Izbat Tabib is uncontrolled.

05:35  Eliyahu Gate. There are only a few workers and cars at this early hour. At the turnoff to Qalqilya, there is no checkpoint.  We were told that at this hour, yesterday, there was a flying checkpoint here.

05:40 The Western entrance (by way of the factory) to Izbat Tabib is blocked by military vehicles, police, a military ambulance and many soldiers crowding around.

05:42 At the entrance to 'Azzun there was no military presence.  We hurry to the Jayyus gate in order to arrive at the opening hour. The new road to Tulkarm is wide and paved in this area.  At the turnoff to the entrance road to Jayyus, there is a heap of sand which prevents access.

05:55 The gate is closed.  A Palestinian sits on the bench and two Ecumenical volunteers who also got up early don't know what to do.  It turns out that from this day on, the hours of the opening have changed and I hadn't noticed!  The new hour is 06:45-07:15.  The volunteers invite us for coffee at their house.  They were present at the disturbance at Izbat Tabib yesterday and are in contact with the volunteers there.  It was reported that today, at 04:00, a lot of soldiers burst into the village, demolished the tent which had been built along the path of the Wall, and carried out violent searches in 4 houses, among them the house of the village head.  There were no arrests or interrogations, just violence.  The international volunteers were hosted in these 4 houses. We return to the agricultural gates.  At both of them, the passage is quick and with no problems.

07:50  Izbat Tabib. We return to 'Azzun.  No soldiers.  We turn off at the entrance to Izbat Tabib by way of 'Azzun. There are no soldiers or roadblocks on the way. On the left, at the entrance to the village, there are soldiers between the trees who do not stop us.  We travel with no disruption to the end of the road.  No more soldiers or vehicles at the western entrance.  Along the road, we can see signs of the work of a bulldozer.  We arrive at the village and meet M., who takes us to the house of the head of the village.  We also meet the ISM volunteers who are there.  Also, the Ecumenical volunteers from Jayyus and their driver arrive, photograph the destruction in the houses and take down testimony. In regard to yesterday's events, there is a report on the ISM volunteers' network.  Three international volunteers are still detained.  One older female volunteer is hospitalized at Meir Hospital in Kfar Saba, with a broken arm and an injury on her forehead. The morning's events: at 04:00, about 50 soliders entered the house of the head of the village and turned it upside down, broke a computer and television, emptied closets onto the floor and trampled on the contents.  They went through the personal papers of the people who still don't know what, or if, anything was taken.  According to the owner of the house, 1000 dinars disappeared, which she received from her father and hid in the closet in the bedroom.  We told her that she should file a complaint with the police otherwise there will be no chance of an investigation.  They vandalized the kitchen and threw all the furniture around.  We saw the house in this condition and the Ecumenical volunteers photographed and promised to send it to our website.  The family has 9 small children who were, naturally, asleep when the soldiers broke in. In the second house, the owner asked the soldiers not to enter the bedroom of her 15 year old daughter.  5 soldiers went into just this room and turned it upside down, took clothes out of the closets and threw them on the floor, stepped on them and on the bed linens.  The girl cried so much and was so upset that the doctor had to come and give her a tranquilizer.  They continued to another 2 houses in the same complex and did the same.  The commander warned the head of the village not to complain about the soldiers' behavior.  A senior officer told them that soldiers would come every night to destroy the contents of 4 additional houses until they stopped protesting and demonstrating against the building of the Wall on their property.  And they should also stop hosting the international volunteers. At the same time, the soldiers even destroyed the tent which they had rebuilt and took the chairs and property which were there.  They didn't arrest anyone from the village or interrogate anyone.  Clearly, the point was simple intimidation.  The soldiers remained in the village until 06:00 and said they would return. M. told us that they would not stop protesting and fighting to prevent them from confiscating the land remaining to them and, if Israelis and foreign volunteers can help them, they are very grateful and even believe that this will help them in their struggle.  They turned for help to a lawyer, but they said that he didn't succeed in helping. The head of the village and M. said that they suggested that, if the army insists on building a Wall, they should do it next to highway #55 and not on their land. According to the present plan they will be uprooting about 20 olive trees. The residents of the village are poor, they do not have work permits in Israel.  Most of the houses have outstanding demolition orders because the whole village is in Area C.  We left them with heavy hearts, especially when we recalled that today is Holocaust Remembrance Day.

03.5.11: Addition to the previous report.  We heard what had happened there between 04:00-06:00.  We saw the results of the violence and destruction of the soldiers in the houses they had entered.  We saw the computer and the TV thrown on the floor, broken, in a room which looked like an office, and the open drawers.  In a number of rooms, we saw bedclothes and clothing which had been taken from all the closets, thrown on the floor and the beds in one messy pile.  The closets were broken open.  In the kitchen, the mother had rearranged things a bit (they have 9 children), but we could still seen signs of the chaos.  In the second house, we saw the girl's room in the same condition.  All the bedclothes and clothes had been taken out of the closets and thrown in a pile on the floor and on the bed.  The soldiers especially entered this bedroom in the house, although the mother had asked them not to.  We were not able to photograph, but the Ecumenical volunteers who were there with us promised to send pictures.  We also saw signs of the bulldozer's work along the road within the village, but we didn't see a lot of destruction.  According to the Ecumenicals, the soldiers did not return to the village today (as of the afternoon   ( 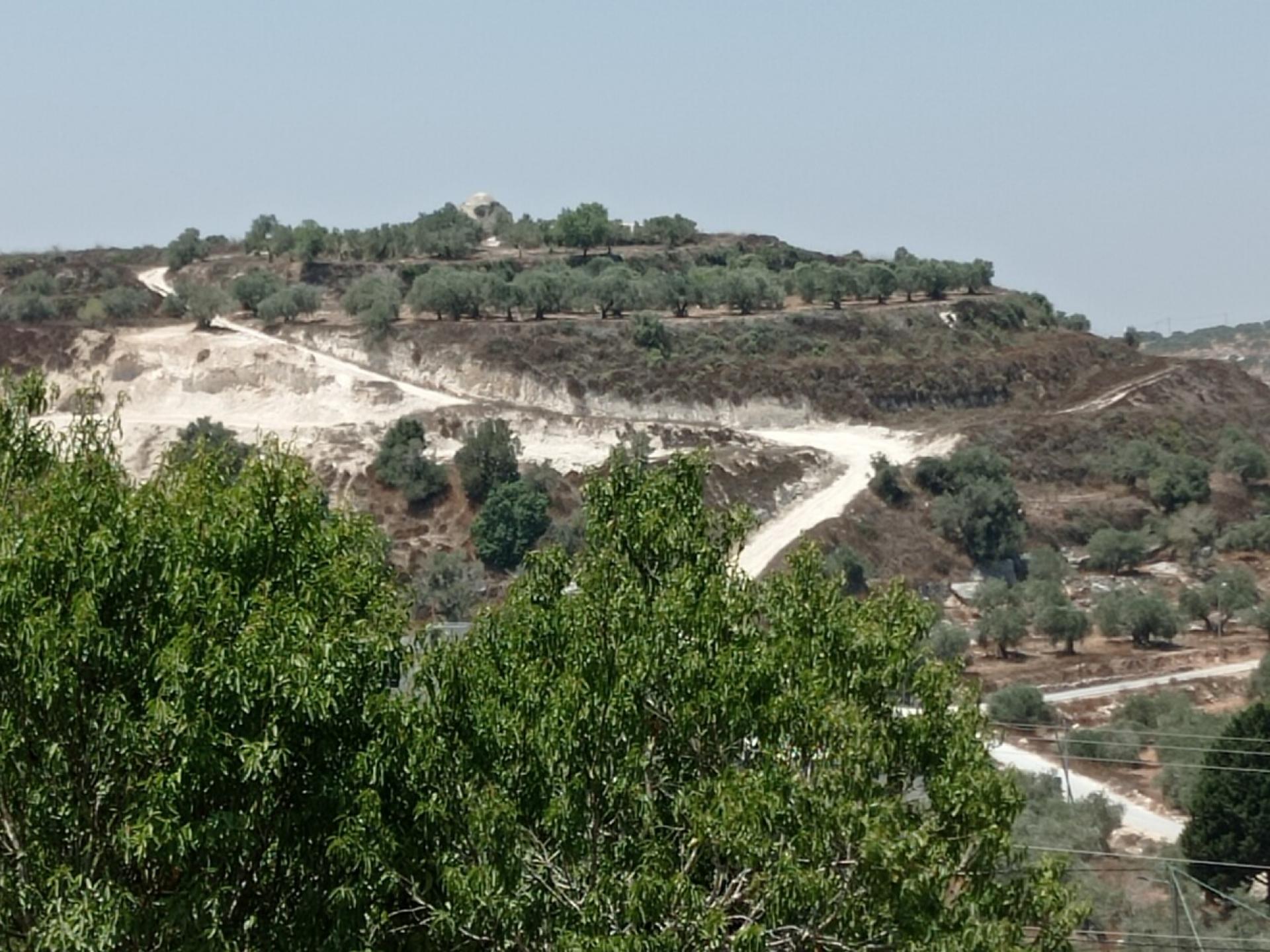 The view from N’s home