06:15  A’anin checkpoint
20-30 people crossing on their way to work in the olive groves and elsewhere.  The permits of some of them expired today; they won’t be able to return until they’re renewed.  They know that renewing them involves a lot of red tape, which is intentional.  A 15-year old youth asks, completely seriously (in despair) that we take him with us – he wants to live in Israel.  “A’anin is dead.”  His father says that he hasn’t worked for 15 years.  Luckily, three of his eleven children are working and manage to support the family.  A seventy-year-old woman, who appears very old, limps slowly across the checkpoint, supported by people on either side, breathing heavily.  She wanted to visit her son somewhere and we volunteered to drive her as close as we could.  Her relatives convinced her to return home and she didn’t accept our offer.

At this hour most traffic is from the West Bank to the seam zone, people who are lucky enough to have a job and an entry permit.  The inspection building is closed because of electrical problems, and those crossing are checked with a hand-held magnemometer out in the open.  Crossing seems to go faster than usual.

In the photo:  The yellow gates

opposite Zabda are locked.  Cars are parked all around; their owners (from Yabed, Kafin and Zabde) prefer not to make the detour through the Dothan checkpoint, and take a taxi from the locked gate to the Reihan checkpoint.  These locked gates benefit only the cabbies who pick up passengers, including A, the driver, who’s waiting impatiently for 9 AM when the Katsav verdict will be announced.

07:30  Mevo Dothan checkpoint
Traffic flows in both directions almost without inspections.  The pillbox is manned and calm reservists stand at the checkpoint itself (veterans, aged 30 plus), talking about hostile activity aimed at the soldiers and the checkpoints in the area.  A few days ago, in the afternoon, a Molotov cocktail was thrown at them, and a fake bomb was discovered at the Hermesh checkpoint – placed by 14-year-olds, who said it was a Hamas initiation.  That’s why they believe that they and the checkpoints protect the homeland against terrorists. 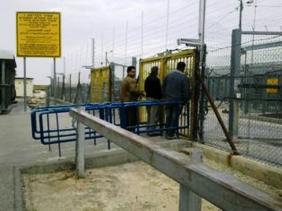 Traffic goes through very quickly.  In the photo:  Young men, none of whom, unlike their parents, know Hebrew, seem very up-to-date in their dress and hair styles, enter the terminal from the Palestinian parking lot almost without delay.  They then exit to the seam zone – almost all of them to east Barta’a.
Our friend W. reports on the difficulties the charcoal kilns in the area are having because of reduced output.  His house, being built on top of his parents’, is progressing.  Soon floor tiles, windows, doors, and then he’ll put together a bride-price to get a wife.  He keeps getting younger and more amiable while we keep getting older.