The third Friday of the Ramadan, Qalandiya checkpoint


As the hours passed, those in charge of keeping the order at Qalandiya checkpoint were done with their courteous gestures, and the behavior and speech of those in uniforms, towards the Palestinians, were again as usual: impatient, disrespectful, and the use of load voices towards those standing only a few centimeters away from the offensive commander (mostly women were standing there): "Ruhi-El Bait!...", "That's the law", "Erja, Erja...", "Get out of my sight...", "I already told you, you won't pass... what don't you understand?"

To us this seems for the best. We think the false gesture are of no good since their aim is to deceit and create the misimpression that  occupation is human and enlightened.

For this is reality as it is: humiliation, prevention, confiscation of IDs and ridicule of people in a ridiculous language.

The occupation is an occupation. No splendor and no honor. The true and ugly face which will eventually reveal itself even if they try to cover it with makeup and apply its cheeks with pink rouge.

"As they see it", said my friend Tami, "in comparison with previous years, everything around here is more organized and neat..." This method harms the Palestinians: the fishing net they had spread over the lot, which on regular days is a parking lot, and over the roads leading to it, transformed the place into a sterile

zoon with four inspection posts. The few that managed to find cracks were caught soon enough and were sent to the back with disgrace: "all those who aren't permitted must be taken to the evolving door...", ordered a BP officer and his soldier obeyed without hesitation or doubt.

The relative restraint and courtesy of the past two weeks were over.

The method of preventing from women who had yet reached the defined age, from passing and arriving at the place of prayer was: confiscation of IDs, the person confiscating the document walked away in speed towards the exit, as the owner of the ID hurried behind him for fear she might lose the documented proof of her existence.

One of the BP soldiers perfected the system and took it up a notch (for his own entertainment and that of his friends who were enjoying themselves from the side): he took the ID of a woman and told her to come and get it, and as he was walking backwards he held the ID up in the air, the heavyweight woman was forced to leap and try to catch it. The hand was elevated higher and higher and the woman jump higher and higher, and then again: He took two steps and lifted his hand, the woman leaped and jumped in the air as her hand stretched towards him... only once she had passed the forbidden line at the passage, the ID was given back to her.

Men between the ages of 45 and 50 who had managed to obtain "Prayer Permits"(a term I find horrifying since it's very essence is to prevent prayer), stood for over an hour and a half in the long lines and waited to reunite with their women who were  on the other side- are they the ones who are supposed to find comfort from the appliance that sprays cool water?

"That's the law"- the soldiers kept on saying like a religious mantra while they specified the restrictions according to which they preformed the selection.

"That's a law"- they said when they separated an old woman from her own granddaughter and after the girl was sent away we heard "that one, she doesn't care about her grandmother, sending her off to Jerusalem all alone...". Even an officer from the Arbel unit who said he was dedicated to the international law used this mantra. As though the statute book of the state of Israel demands that teenagers and anyone who had yet reached the fixed age, be deprived of their religious rights.

Being Jewish, some of the Palestinians still imagine that we able able to perform miracles: "talk to them... we didn't come here make mess of things, just to pray... maybe you could help us?

And one elder and experienced person declared: "Only god can help us..." and then he added: "We aren't terrorists. The terrorists are in government!"

The line of men was more organized then that of the women. They didn't stay put, several minutes after it was clear that there were no relieves and a 49 year old man was told: "Come back next year..."the man turned back and returned home. Others filled his place. Once again the same request, and again the same refusal... The long and crowded line was dynamic and there were new people all the time. As the hours passed the line grew short and disappeared.

The women on the other hand wouldn't concur with the occupier's verdict, same as they did on the other Fridays. The women looked for cracks: they squeezed in and got caught, taken back and pushed again. They were angry, mocking, yelling, asking, begging, insisting, and refusing to back down... they were of all ages- young and old, trying in every way: presenting their IDs or that of an elder relative... and once the document was confiscated some stuck to the ground: "Take a picture of us so that the Arabs will also see...". And despite the heat, the fast, the dust and arbitrariness- their spirits remained high. They talk to us, the strangers, the listeners, the observers, the ones that see them- in a language we don't understand or in a foreign one that connects us.  They laughed with us about reality and life while they held their children, rocking them to sleep, for hours and hours... until the voice of the Muazin was heard, until the movable blockages are pulled away and heavy machinery was brought to remove the blocks to the side of the road. Then they headed back home, until next Friday. 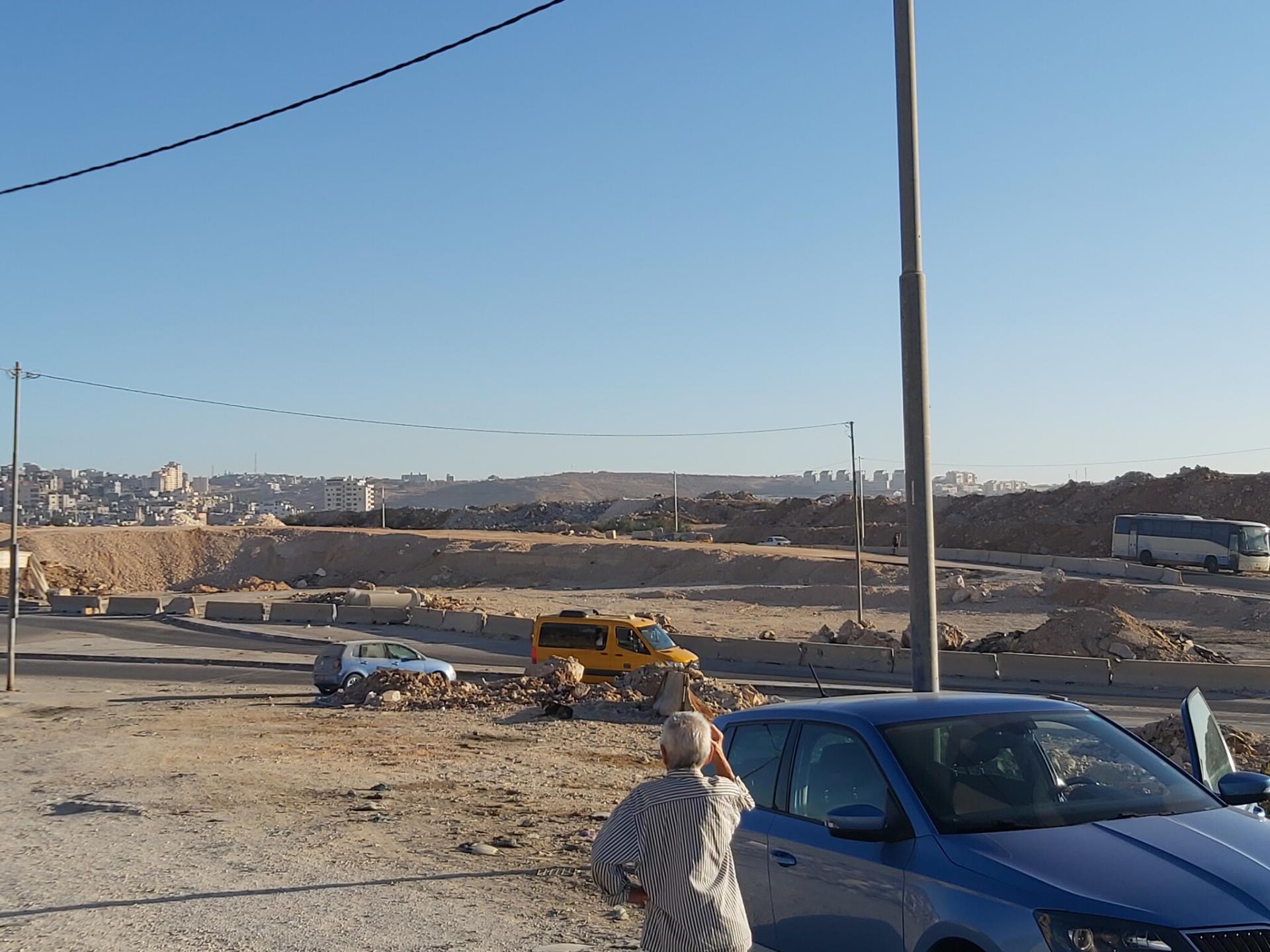 A new road was paved on the eastern side