Summary
Netanyahu's announcement, last week, to suspend building activities in the settlements was broadcast all over the world. Although most Israelis accept this is completely phony, few get to see what we do -- that building continues, the army closing its eyes but dominating every bit of life in occupied Palestine. In the areas monitored by us, perhaps the worst aspect is the taking of the land from under the feet of its Palestinian owners, maintaining an insistent and persistent pestering of the inhabitants or landowners of Seam Line communities, the harassment over the granting of Seam Line, and a variety of other, permits and the ongoing construction of a Separation Barrier bringing more and more Palestinian lands into "greater Kfar Saba/greater Israel."

It's the third and last day of Eid al Adha, so, in many places, it's unusually quiet. On the other hand, today is a day to visit family and friends, so there are many families going, or trying to go, in and out of the Seam Line village of Ras Atiya, and there is an endless flow of cars going in and out of Nablus.

12:00 Habla - Gate 1392
The gate is still open, but hardly any customers, as the soldiers gather near the jeep, already at hand to whisk them away after they've finished their arduous powwow and closed the gate at 12:15.

12:45 Ras Atiya
The Seam Line checkpoint is staffed as is usual, one soldier in the lookout tower above the Separation Barrier, the rest, sitting by their makeshift tent, chatting until duty calls, and they check, seemingly as slowly as they can, each pedestrian, each car or truck. Nobody is in the concrete checking booth at the computer today: a gesture towards the Eid al Adha holiday? We wouldn't bet on it.... Just as we arrive, three military police women turn up from the same direction, and as is our wont, we greet them, "Shalom." "We're forbidden to talk to you," says one, and we already know that there will be no allowances made for people trying to celebrate the Muslim holiday. Life here will be as hard as ever for the families, the children, in particular, decked out in new finery, the parents bearing wrapped packages for gift giving elsewhere.

12:55 -- eight people from one family, from an elderly man to tiny toddlers, are stopped, the relevant IDs perused over and over in detail. All pass into the village west of the Separation Barrier after this thorough checking. Coming out of the village, young men's IDs are not only checked but compared against a list in the hands of the soldiers. One young man is involved in an altercation with one of the women, and it's pretty sure that he must be speaking Hebrew, to no avail. When we step forward to the hill beyond the open gate of the checkpoint, we are confronted by another military policewoman and a soldier, telling us over and over that we are forbidden to stand where we are -- positioned in fact to view, in better detail, the horror of the new Separation Wall, being built by Alfe Menashe. It's obvious we will get nowhere with talking to the soldiers below.
The only relief on this winter's day: one of the young boys near us holding a bunch of beautifully soft narcissi newly shot up after the last rains.
Although there is not much action by the Separation Wall being built, there is one earth digger at work and a new sight: an umbrella where two soldiers should be sitting and guarding the Wall. Instead, they are lying on the ground, shooting the breeze.

12:30 Qalqiliya
A lot of traffic going into the city, and although there are no soldiers stationed in the checking booth, there is one in the lookout tower at the side of the road.

On Route 55
Azzun is open, and the town appears especially sleepy for the holiday, unlike Nabil Elias which is at work, although minus many of the sheep that were evident just a few days ago!
Qedumim. There is green plastic on view near the cave outpost, and new construction of houses, grey cement blocks clearly visible, on the south side of the road of the settlement proper.

Deir Sharaf
To prove it's a holiday, the gates

of the so-called "barrel" works are locked tightly shut. Traffic, vehicles with both Palestinian and Israeli license plates, green or yellow respectively, flows endlessly in and out of Nablus, and the soldiers at the checkpoint must wonder, as we do, why on earth they are there.

14:45 Shaar Efraim/Irtah
Only one checking booth is open in the terminal, although there are plenty of workers, women, as well as men, returning from their jobs, perhaps early, since it is, after all, a holiday. One woman complains that women and men are in the same line, both at the one and only turnstile; another complains about the wait here, an hour now, several hours this morning. All we can see is that only one checking booth is open inside, and that the folding doors to the other half of the complex are closed. Our phone call to the DCO seems to have some result, in that the waiting crowd is allowed in. We follow a woman with a large tray of strawberries on her head, and it takes her but seven minutes to get through - towards home, wherever that might be.

14:55 -- the turnstile stops, or we should say, is once again stopped, the crowd grows, once more, but is soon let through. As we, too, leave, we see that we have been seen from the window above by someone of the private security company that helps to make life such hell for Palestinians who have the "luck" to have permits to work in Israel. 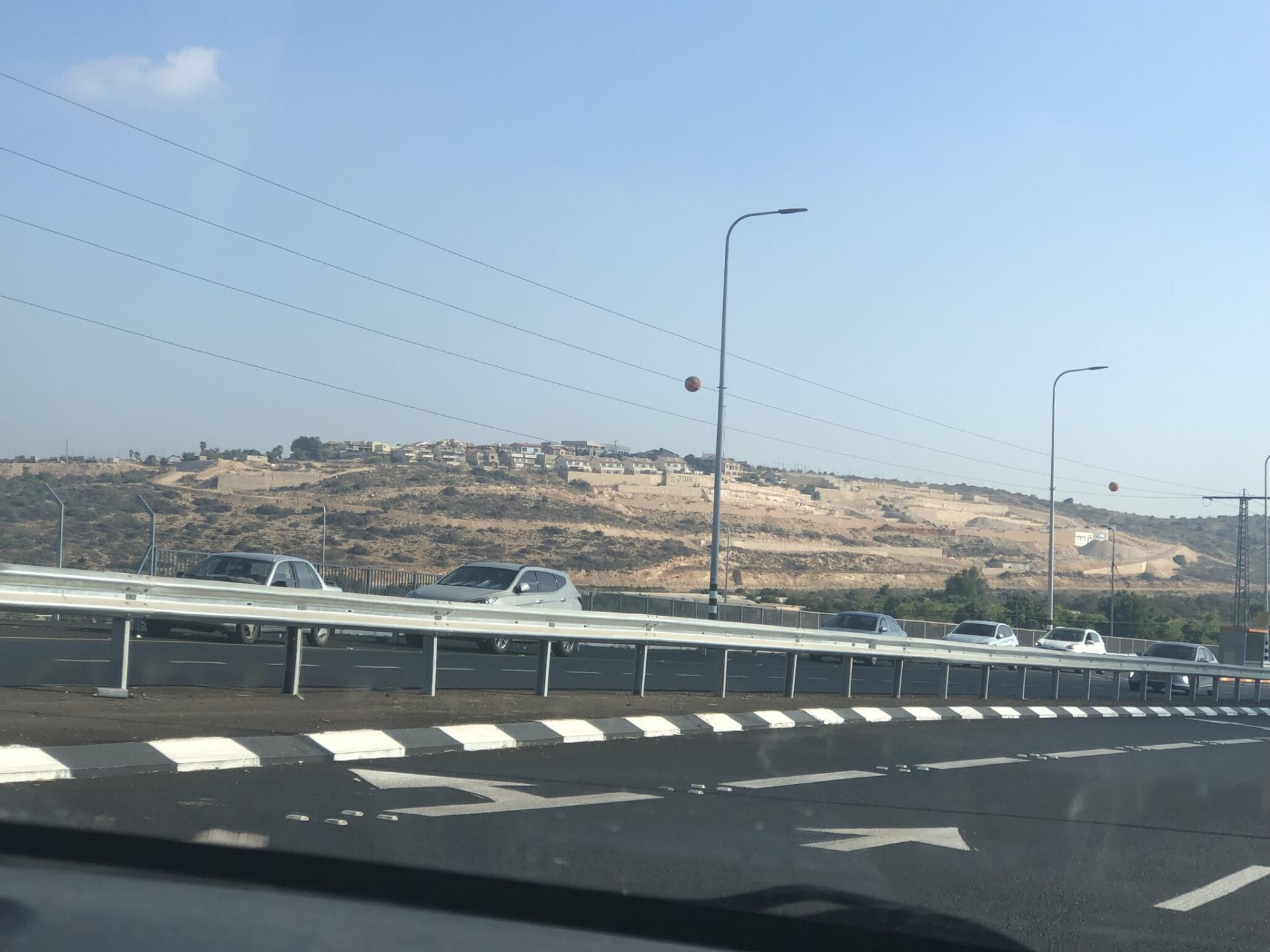