Harvesting olives in the face of threats by settlers

Each year during the olive harvest I volunteer with one of the Israeli organizations helping farmers in Palestinian villages on the West Bank.  When asked 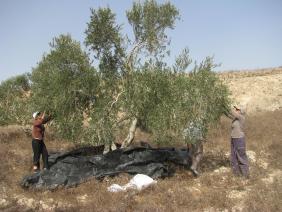 “Why,” here’s what I say:  As a daughter of the Jewish people whose members were for years was harassed, expelled and dispossessed only because they were foreigners, I’m ashamed to see hooligans who are my compatriots using violence to chase people from their homes.

All the settlements that adjoin Palestinian villages have already stolen a large part of their lands and sources of livelihood, but some settlements are particularly violent and the nearby villages constantly suffer from their terror, whose aim is to chase the villagers away and steal what little remains.  They burn olive trees, steal sheep, damage tractors by puncturing their tires and block wells.  When Palestinian farmers organize to oppose the settlers they’re accused of assault and thrown in jail.

I’m referring to the settlements of Yitzhar, Har Beracha, the Havvat Gil’ad outpost, and others.  The army, which is sovereign in the occupied territories, is supposed to protect the farmers, but is present in the field no more than four days a year.  The hooligans rule unhindered for the remainder of the year, and aren’t apprehended.

Only when you see what goes on with your own eyes can you understand how helpless and desperate the villagers are.

Burin is one of the villages most vulnerable to harassment by settlers.  It lies in a small valley between the two settlements of Har Beracha and Yitzhar which overlook it from above.  The violent settlers descend from both directions to Burin’s fields and to the olive groves during the harvest, and at other times as well, burning and beating.

We climbed up to the groves adjoining Har Beracha.  The first thing we saw was rows of charred olive trees.  Their owners no longer dare to rehabilitate them, and thus this grove has become occupied territory of the Har Beracha settlement and its satellites.  The fate of other plots that haven’t been burned isn’t much better.  They’re full of thistles, thorns and nettles ashigh as our knees because the farmers can’t cultivate the plots without guards.  Except for two days a year (if at all) when the IDF is present, the famers are exposed to the hooligans’ rampages…This year the presence of Israelis didn’t really help either.  Yitzhar’s hooligans, some of them masked, poured down the hill to the plots below them, indiscriminately heaving huge rocks.  Some people who were picking olives (including Israelis) were injured.  At least the incident was documented.

The villages of Amatin, Far’ata and Kafr Jaloud met a similar fate.  The groves of the first two villages adjoin the Havvat Gil’ad outpost, and the third is surrounded by six settlements.  B’tselem recently installed cameras in the area; since then the settlers wear masks when they go into action.  Organized assistance by Israelis on most days of the harvest increases the farmers’ sense of security, and as more people participate the chance of attack by settlers diminishes.

At the end of the day, participation in the    harvest is not only a humane act; it         contributes to security.  The settlers’   violent behavior fuels hatred, desire for     revenge and despair.  That’s fertile   ground for terrorism.  Contact with   Israelis who preserve their humanity and   adhere to universal values contributes   significantly to preventing terrorist acts   stemming from despair and vengeance,   and has a long-term effect.

It’s too bad the IDF, which is sovereign on the West Bank, abandons the Palestinian farmers to the violence of the hooligans who rule the area almost unhindered.  It’s too bad that outposts like Havvat Gil’ad, which are illegal even according to the state of Israel, and not only according to international law, aren’t removed.

The work by members of the Olive Harvest Coalition and Rabbis for Human Rights is sacred, preserving human dignity and Judaism’s honor.