The Jordan Valley: "Where Shall We Go?" | Machsomwatch
Skip to main content

The Jordan Valley: "Where Shall We Go?"

Takeover of fertile lands in order to annex them to settler-colonies?

Living off the electricity grid?

To these harsh conditions, the Palestinian inhabitants of the Jordan Valley have become accustomed during decades under Israeli occupation. They had to give up growing agricultural produce in this fertile region, and ever since Israel took over their land, their livelihood depends entirely on shepherding. They purchase their water at exorbitant prices and transport water tankers over great distances. The fortunate among them own small generators, and even solar energy systems which the Israeli army and Civil Administration see fit to demolish from time to time.

But the suffering of Palestinians – who have lived in the Jordan Valley for generations – does not end here. In recent years they have also suffered demolitions, temporary evictions and especially acts of violence by Jewish settler-colonists against the Palestinian shepherds – that make their lives unbearable.

DEMOLITIONS: Recently we have witnessed a rise in the number of demolitions of houses, tents and sheep pens, acts that leave entire families and their flocks without shelter in the especially harsh weather conditions that exist in the Palestinian Jordan Valley.

MachsomWatch volunteers have reported the dire desperation of families with whom they are in contact. In January 2019 we reported the demolition of a family shelter on a cold and rainy morning that left its inhabitants, including five small children, without shelter, and the cruel treatment by soldiers during that incident: "I have no time for your wailing” shouted the soldier at the father as he ripped the baby’s blanket.

Watch the video we took of the demolition. 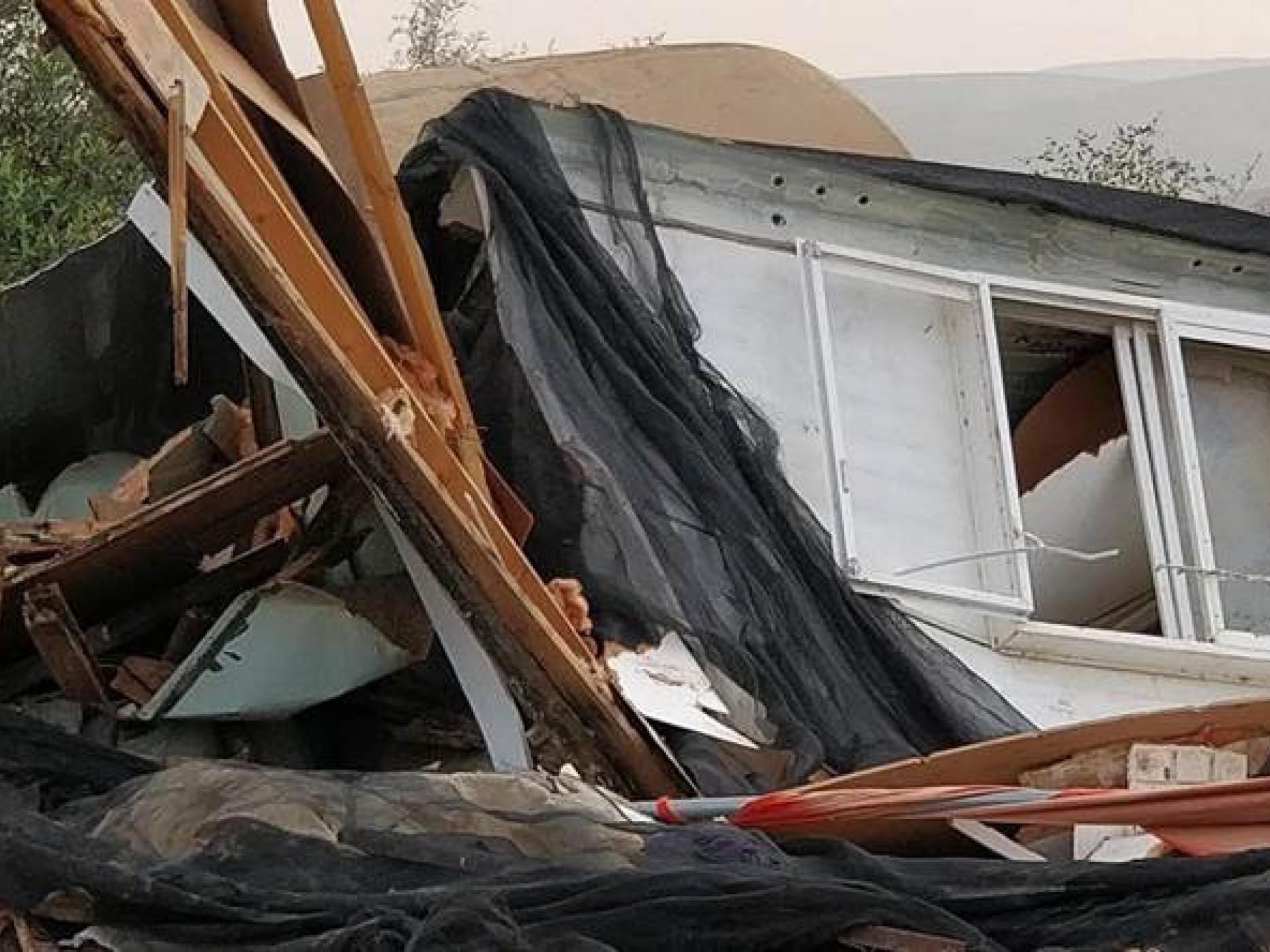 The Demolition of Abed and Tahreer home in Fasayil
Photo:
Nurit Popper

TEMPORARY EVICTIONS: Entire extended families including children and the elderly are evicted from their homes, from early morning hours until nightfall.   Israeli army maneuvers are the stated reason for these evictions, which sometimes extend for two consecutive days, no matter the weather conditions.  In February 2019, 32 families – about 200 people, including children, the elderly and the ailing, were required to leave their homes in Al Malih twice within two weeks, as reported by MachsomWatch volunteers.

Watch the video we took of one of these evictions.

This happens throughout the year in lands inhabited by Palestinian communities that have lived there before they were declared military firing zones. The intention is obvious – to make Palestinians give up their habitations in the Palestinian Jordan Valley. Why does the Israeli army have to conduct its maneuvers in the limited areas where Palestinians live, of all places, when it has vast, empty stretches of land at its disposal? The answer is provided in the protocol of a discussion held by the Knesset Subcommittee on Defense and Foreign Affairs. At that meeting, Lieutenant Colonel Enav Shalev, said on behalf of the army, that the point of military maneuvers is to drive out the Palestinian inhabitants. Or as he put it: “When the armies march – people move aside… Wherever we reduce training – wild weeds grow” (Amira Hass, Haaretz daily, May 21, 2014). 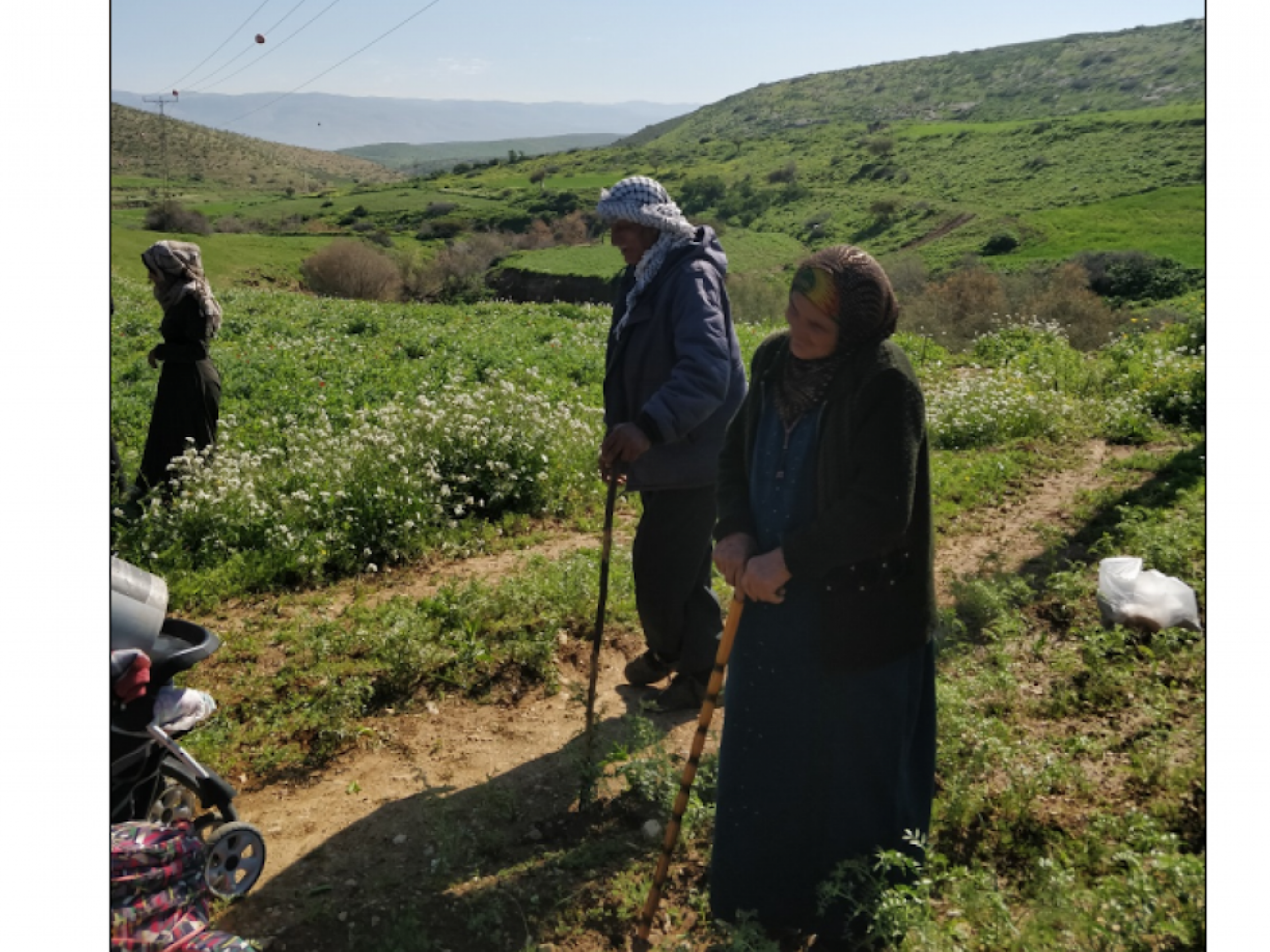 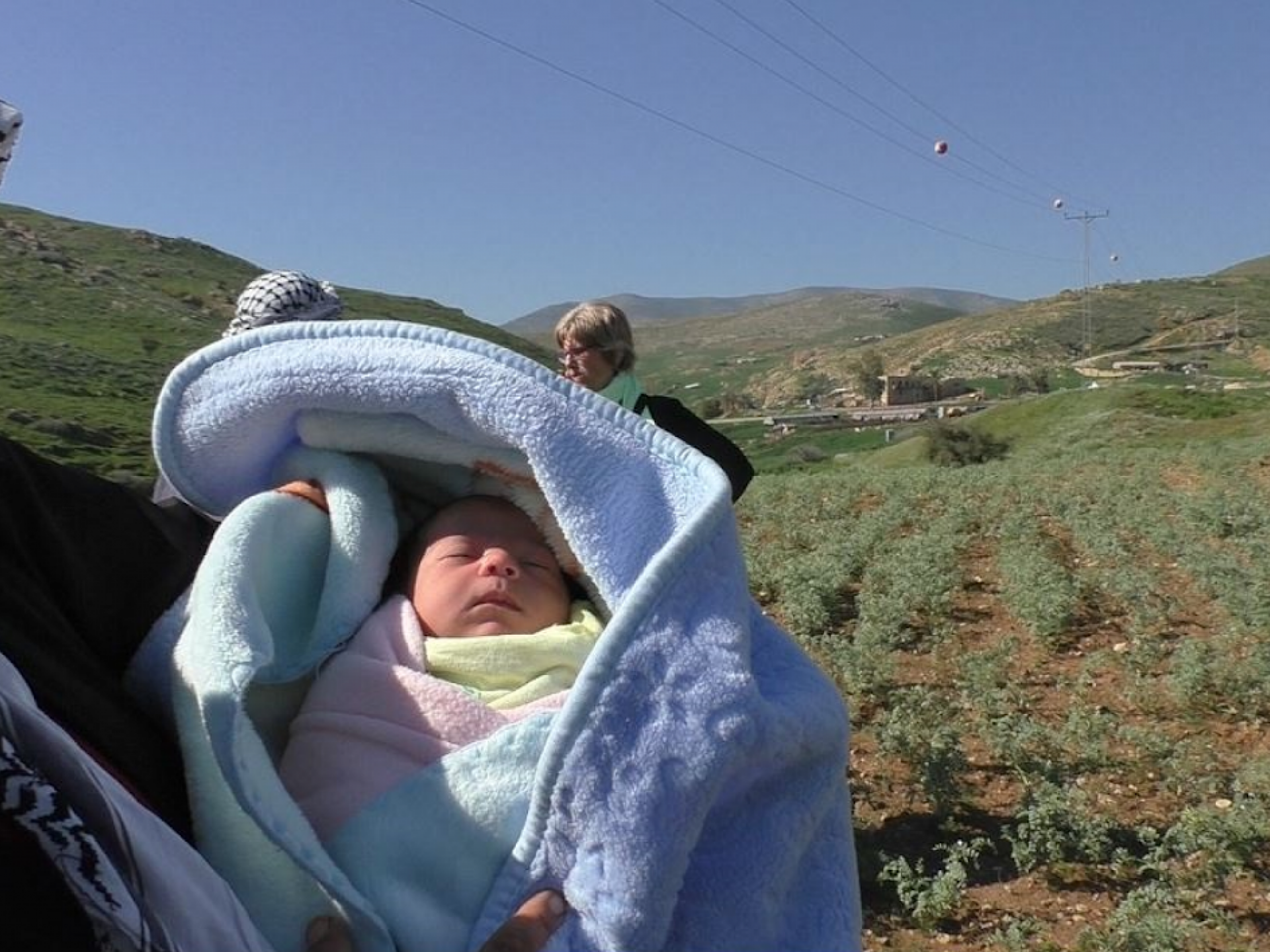 Even This 5 Month Old Baby Was Expelled by the Army
Photo:
Nurit Popper

HARASSMENT OF SHEPHERDS: Harassing Palestinian shepherd communities in the Palestinian Jordan Valley has grown to a new and frightening pace of late.

Over the years Israel has taken multiple measures to make it impossible for the small Bedouin communities to remain in areas where they have resided for generations. It diminishes their grazing grounds which are supposed to be open to all. A deep ditch all along a part of the Allon Road (north-south) prevents shepherds from accessing the more fertile lands east of this road (and also blocks the direct route been the small communities in this area of the Valley and the closest Palestinian town of Tamoun). The enormous municipal areas allotted the Jewish settler-colonies are out of bounds for Palestinians, who they must make do with grazing the most arid hillsides.

In the past two years, violent settler-colonists have erected pirate outposts and frequently attack Palestinian shepherds and their flocks. These outposts, explicitly illegal even according to the Israeli Civil Administration, are partly subsidized and supported by the (Israeli) Jordan Valley Regional Council and by the KKL (the Jewish National Fund). Daphne Banai of MachsomWatch, active in this region for the past 15 years, report to Haaretz that she has noticed that these outposts follow a similar pattern of funding and action, showing that these are not the initiatives of individuals.

MachsomWatch and other human rights activists in the Palestinian Jordan Valley cooperate in various ways, including accompanying Palestinian shepherds to pasture and initiating legal action with Attorney Eitay Mack examining the legality of creating and operating these wild outposts. In response to a petition to the Israel Supreme Court protesting the intention of settlers taking over a deserted Israeli army base, the State admitted it was not aware of this plan and the Jordan Valley Regional Council gave a false response.

A petition has also been filed by them under the Freedom of Information Act, about the involvement of this Regional Council in the illegal construction of the outposts. The Council did admit it was involved in the financing and erection of the illegal outposts, but refused to provide information about its involvement “for fear that this would disrupt its orderly operations.” (Amira Hass, Haaretz daily, 4.12.2018).

One outpost was erected in January 2017 inside the Umm Zuka Nature Reserve by a settler named Uri, without any permit, in an area where the dwelling is prohibited. Although MachsomWatch volunteers on a Jordan Valley shift reported this to the authorities immediately, nothing was done to remove the outpost. Soon enough it was also connected to the water and electricity grids.
On Feb. 23, 2019, a MachsomWatch volunteer reported  that an electrical fence was being erected around the Umm Zuka Nature Reserve in order to prevent Palestinian shepherds and their herds from entering and grazing in the area. And who is building this fence if not Uri, the settler-colonist of the outpost.  His outpost and the newly built fence are located inside this nature reserve in direct violation of the court order Uri received to freeze the outpost’s construction two years ago, shortly after it was erected. Thus, Uri’s large cattle and sheep herds can now graze alone in the nature reserve, in all its 22,318 dunams (5,514 acres) unhampered by all the hungry herds of Palestinian shepherd communities of Samra, Khalat Makhoul, En Al Hilwa, Umm Jimal, and Al Farsiya. 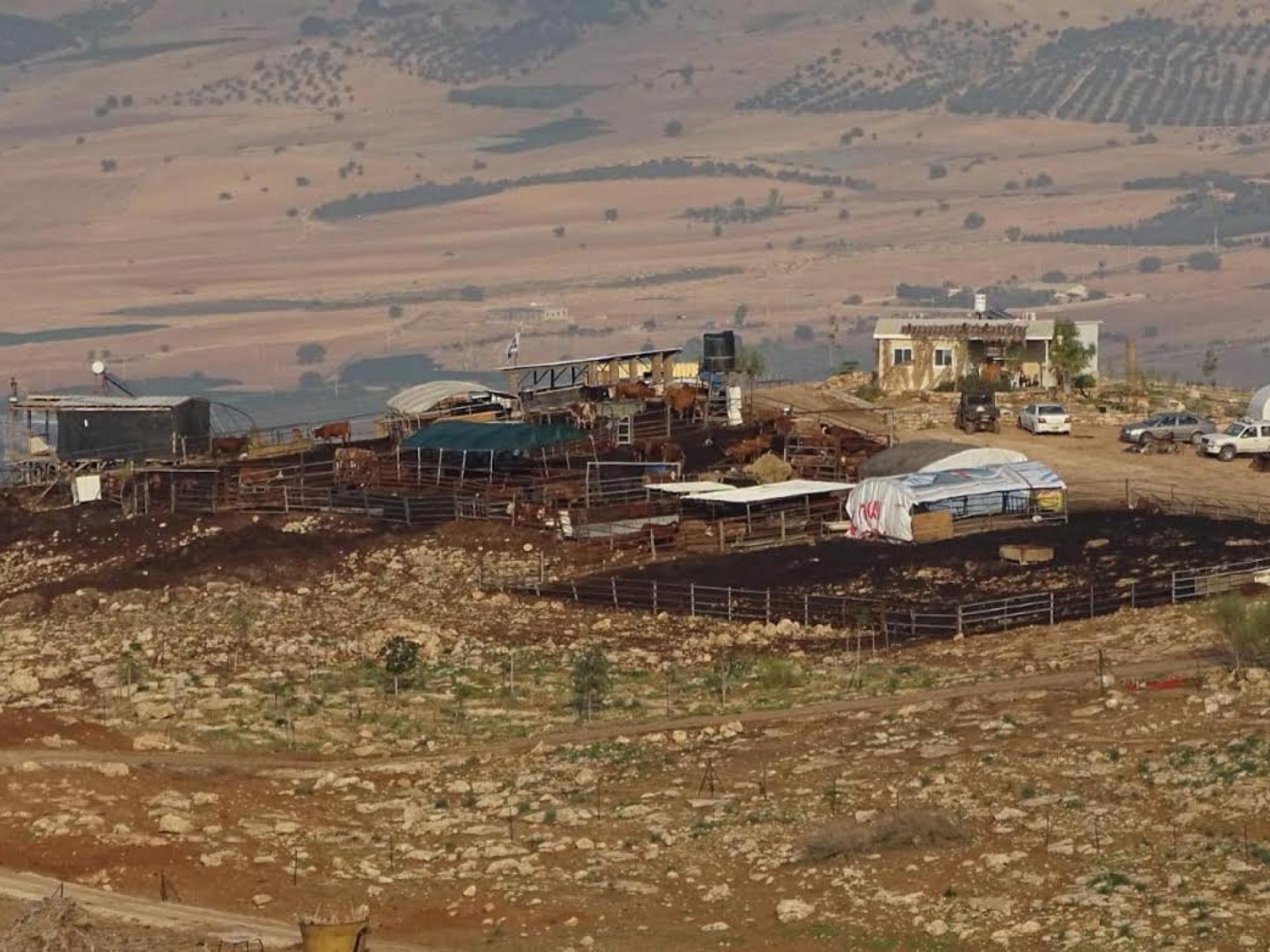 Uri's Pirate Outpost in the Umm Zuka Nature Reserve: The Estate of a Single Colonist
Photo:
Guy Hierschfeld
A routine of demolitions

As soon as he arrived in the northern Palestinian Jordan Valley, Uri, riding tall on horseback – began to sow fear and chase the Palestinian shepherds. Not long ago he was joined by youngsters from various Jewish settler-colonies prior to their military induction, the so-called “hill youth”. A large group comprised of dozens of youngsters has recently based itself in the northern Valley – in the settler-colonies of Hemdat, Maskiyot and Rotem, and overall violence has risen. As the Israeli army refrains from chasing away Palestinian shepherds of late, these youngsters have begun to harass the shepherds systematically and to chase them away from their grazing grounds with threats, by stone-throwing and by racing their mini-tractors into flocks of sheep and goats – sometimes with protection from the army.  Until 2018, Uri and his friends mostly harassed  the shepherds from Hadidiya, Khalat Makhoul and Samra. One of the Samra villagers, who was harassed daily for months on end, has given up, sold his flock and left the region. Lately, Uri has moved his flock or part of it to the Maskiyot settler-colony and taken over the entire area up to the Rotem settler-colony (about 10 kilometers beeline from Hemdat). The Palestinian shepherds of En Al Hilwa, Umm Jimal and Al Farsiya have been told they are not allowed to cross the Allon Road eastward with their flocks, even in this northern part where there is no ditch and where they are used to graze. Israeli human rights groups such as Taayush and Combatants for Peace are involved in the ongoing operation of accompanying Palestinian shepherds, and they are joined by members of MachsomWatch. Only with this help do these families manage to hold on to their flocks, as has been reported by our members on 1.12.2018.

The ecological settler-colony Hemdat has also coveted the neighboring grazing hillside grounds and tries to chase away Palestinian shepherds from the area in any way it can – inciting the army against them, exerting violence upon the shepherds and their flocks, and now even false complaints. In the beginning of February, the daughter of Rotem’s security officer lodged a complaint against a Palestinian – Az- A-Deen – for allegedly throwing stones at her while she was hiking in the hills. He was arrested, interrogated and released. It is important to note that Israel never rushes to release Palestinians. He was released because the accusation was fictitious. Palestinian witnesses said that at the end of her hike she passed them and even greeted them with a smile. Several days later, he was arrested again, this time with his brother. She had changed her version and claimed that he sexually harassed and abused her. In her interrogation by the police, she kept contradicting herself and finally ran away. This was reported by MachsomWatch members from the Salem Military Court on 14.2.2019.

Palestinians in the southern part of the Jordan Valley, too, suffer from the settler-colonists and the army. About a decade ago, two pirate outposts were erected there – the Omer Ranch and Mevo’ot Yericho, and these settler-colonists attack the Ujja region Palestinians time and time again. The latter also “enjoy” the army’s nocturnal “visits”. In January 2019 outpost settler-colonists physically assaulted local shepherds and a confrontation ensued. The army intervened and ordered everyone to leave the area.

One can only conclude that the joint conduct of the Jewish settler-colonists, the Israeli army and the Civil Administration in the Palestinian Jordan Valley for the past few years – especially demolitions, expulsion and harassment of shepherds – attests to an acceleration and intensification of Israeli policy, intentional and conscious – of distancing Palestinians from the Jordan Valley region for good.