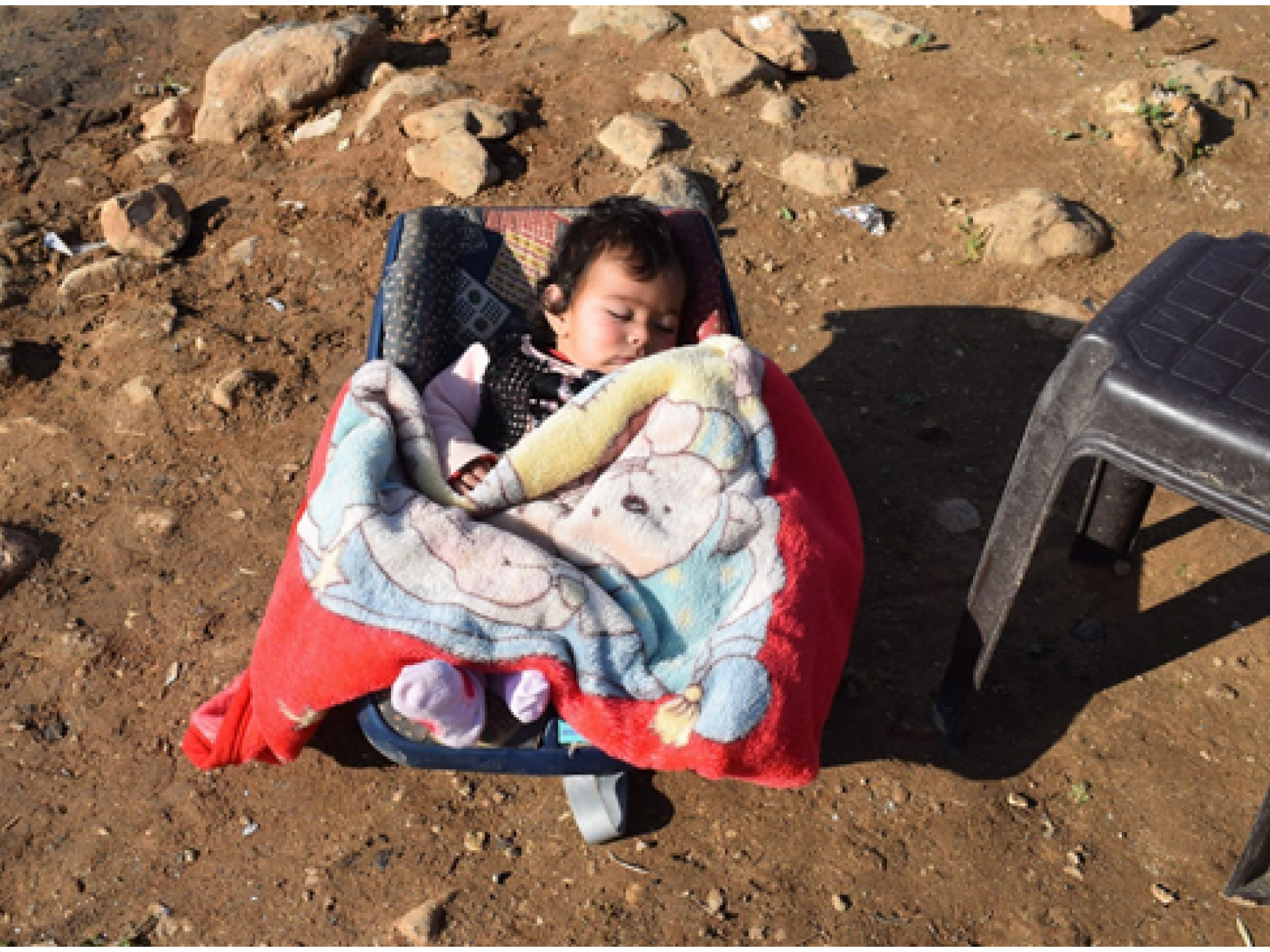 The Israeli Occupation Forces demolished the home of a family with 5 small children.

Pipes, twisted corrugated iron sheets and some broken wooden planks used to be the dwelling of a family until Thursday morning. A military force with 10 vehicles (according to the father) arrived Thursday morning and demolished the family’s measly shelter: parents and five children – the eldest 11-years old, the youngest 4-months old. Homeless in the midst of a harsh winter storm, they were exposed to the rains and the cold wind. A’ called up Tzvia and described the disaster in his desperate voice.

We have known him for over three years now, ever since the first demolition conducted by the Israeli army in Upper Fasail village. It is a rocky area between Lower Fasail and Upper Fasail. The Bedouin families living there arrived at the site after being evicted twice – once in 1948, when they moved to Jordan, and then after 1967 when they were forced to pack up again and move.

A’s family is from Arad originally. After their 1948 expulsion, while roaming and looking for a spot to set up their encampment, they came to the empty desolation where the present settler-colony Maale Adumim is now situated. The family had to leave again, being expelled after 1967. Then they settled in Fasail.

Half a year ago when we visited, A. told us gladly and proudly that he had begun to work as a farm worker for the Tomer settler-colony, close to Fasail, for 80 shekels a day. Thanks to this work he even added a caravan next to the family tent. They would sleep in the tent and cook and store clothes and blankets in the caravan. 4 months ago we visited him after his beautiful wife T. underwent a caesarian section and suffered great pains. We brought them clothes and blankets for the baby

Calling Tzvia on Thursday morning, he told her “it’s all ruined”. He sounded absolutely desperate. And indeed when we arrived Saturday morning, and saw the piles of ruined, drenched, spoiled stuff – we were dumbstruck. A. told us that when the soldier began to cut up the baby’s blanket he implored him to leave it whole for the baby as the rain was falling, but the soldier shoved him aside yelling that he had no time for his wailing.

So Saturday morning we proceeded to Fasail with our friend Buma Inbar. When Buma heard that the family was left homeless, he immediately decided to help organize and purchase a transport of essentials for the family.

When we got there, the whole family was outside including the baby, asleep in an infant seat placed amidst the household utensils that were piled together and the rubble that was once a home. The clothes that had been drenched in the rain were hanging out to dry.

As we spoke with the family, Buma’s friend arrived with essentials he had purchased in Nablus. This included a large tent, mattresses, blankets and more. We were impressed with the efficiency, and the willingness to help on the part of both Buma and his Palestinian friend. Now A. faces much work to re-erect a structure that will serve them as a home.

The children had a few happy moments as Buma presented them with beautiful children’s picture books. They relaxed on top of the still folded new tent and enjoyed leafing through them. 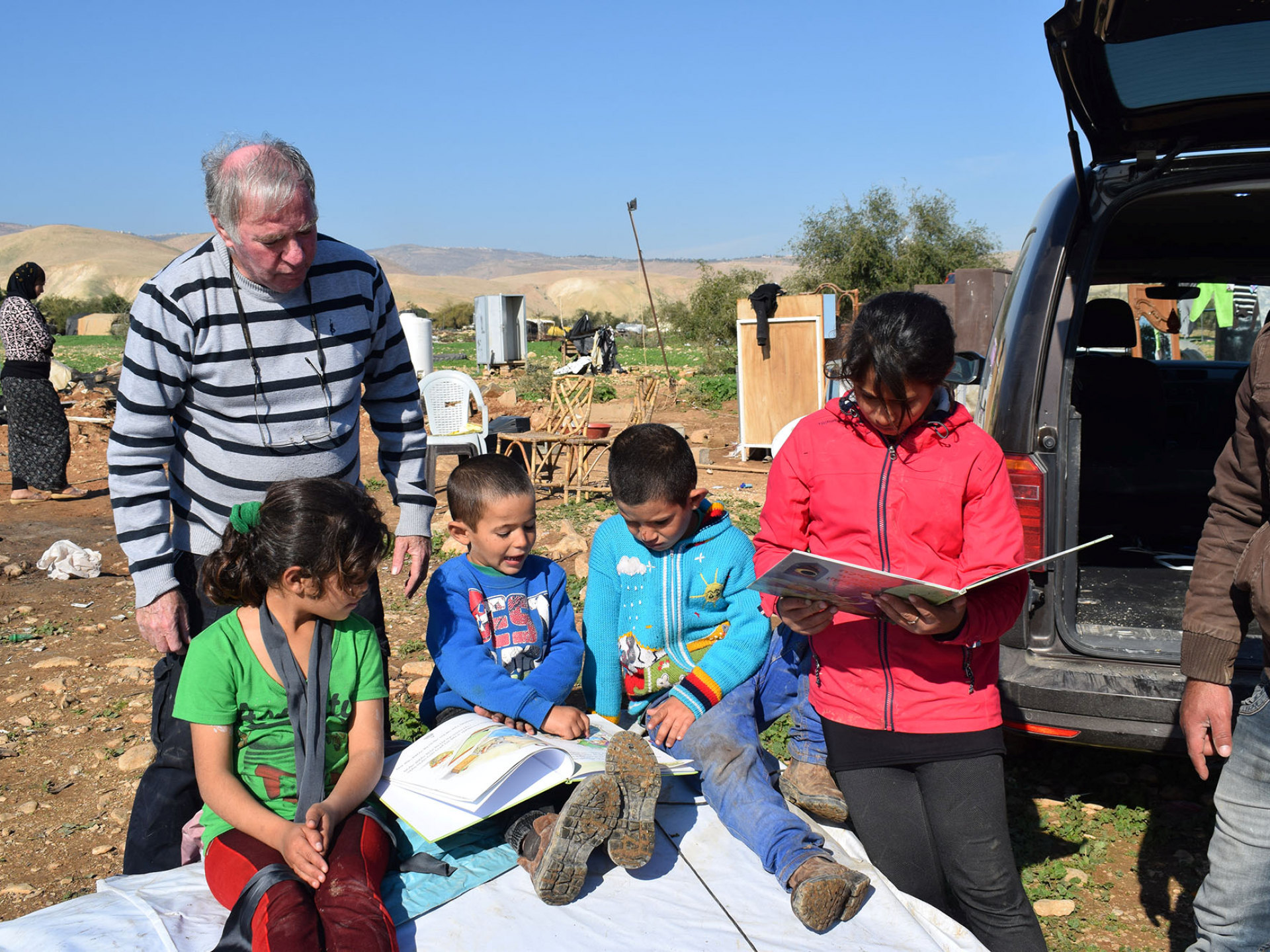 A moment of satisfaction

We left with a fearful heart. What if the army decides to come back and demolish everything again after their new home is erected. Where will they go? They will be living in constant fear, and the children will be left traumatized for life.

Before our departure, we visited our friend H. who lives close to the demolished home. Her special, noble personality has won us over and we nurture our warm contacts with her. About 3 years ago the army came and repeatedly demolished her family’s caravans. This time they were spared the horror. Asking her whether the army didn’t come this time, we saw the fear in her face. What would happen if they were to demolish her home again as well. This is how people are made to live in daily fear of the demolishing army.

We sat with her, relaxed, drinking tea. As we talked, and she noticed my camera

, she suggested I photograph the lush greenery around us. The Jordan Valley is beautiful these days, after the rains have drenched the ground and the bright green grass now fills the scene.