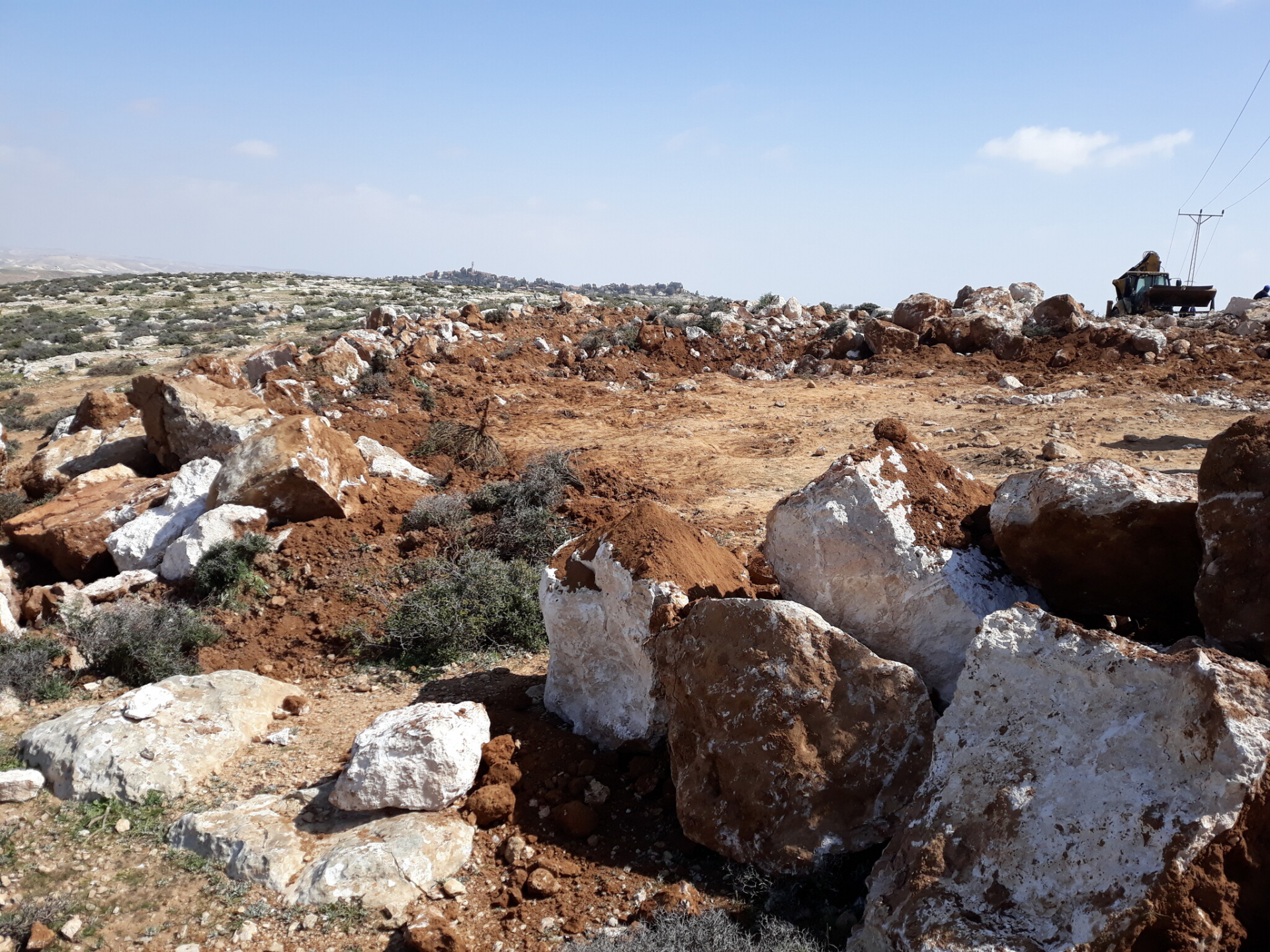 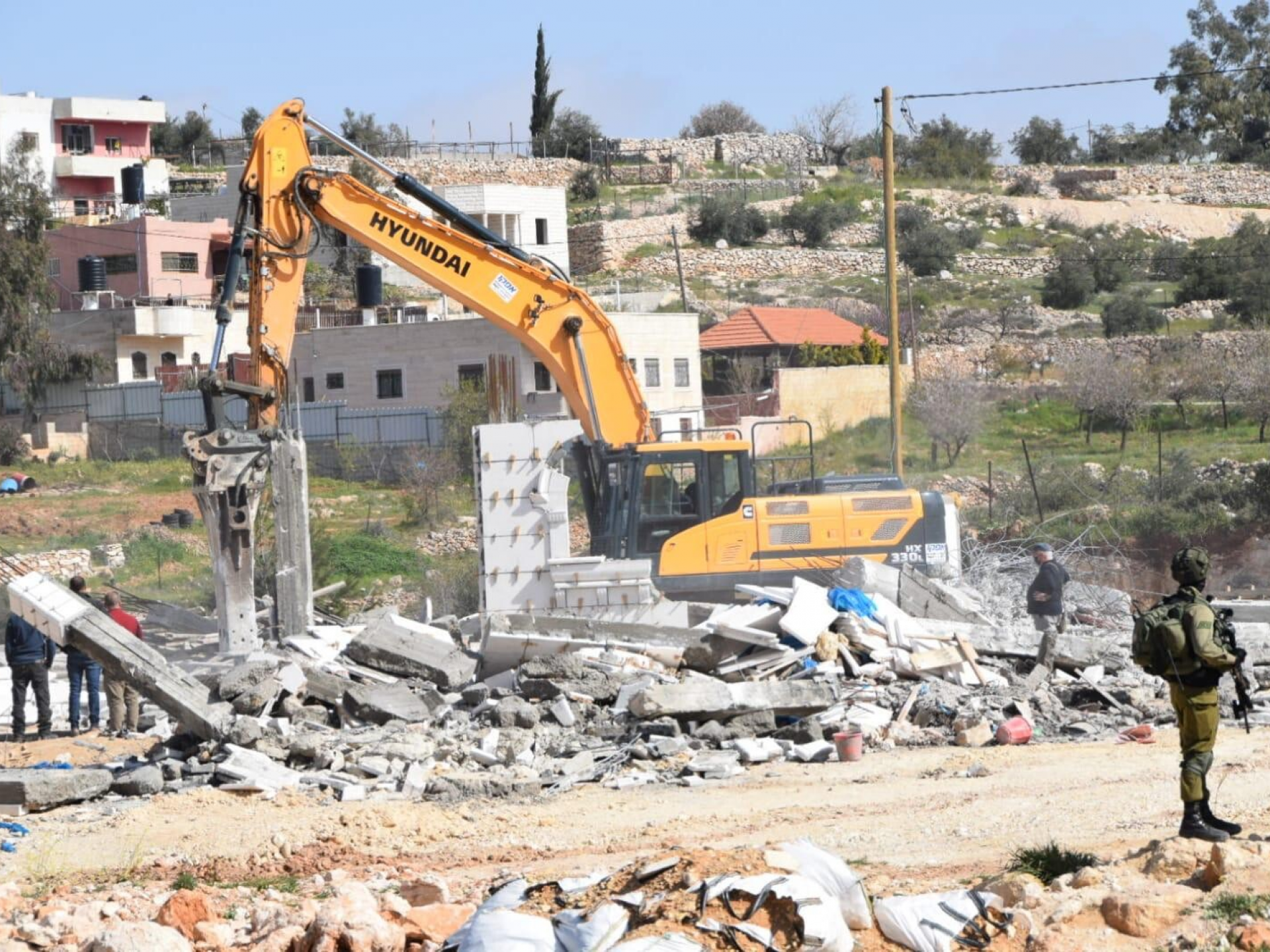 1. Meitar checkpoint: From the west, sewage flows in the Hebron River. Inquiries on the subject to the authorities have not helped so far.

- Nasser is  not here but reports on the phone of the demolition of houses near Bani Naim, east of Route 60 near the square. The houses are in Area C near Area B. Later in the day he sent us photos of the event (attached) but we were not there.

- We met Wadha, the wife of Azzam (an electrician, working in Israel). Southwest of the village, near the settlement of Susya, near the pillbox. The fields of the village that are not cultivated because they are afraid of harassment by the settlers. In the village live Israeli volunteers and also volunteers  from abroad.  Their main task is to guard the shepherds grazing in these areas against the attacks of the settlers. Because they are equipped with cameras that document everything there are less attacks. (But  we remember the severe violence against such volunteers in the past in Tuwani. Hopefully the situation will not deteriorate). Here we met volunteers on theri way to a demonstration against Maon cowshed, and we decided to go there as well.The story of the demonstration below. First I will complete details about Susiya.

- At the demonstration we also met Nasser who took pictures (and also Basel Adra from Tuwani who also took pictures). Nasser said that one evening there was a checkpoint near Susiya and he knew he would be delayed. Indeed, he was summoned to the office of the head of the Civil Amistration, who accused him of inciting the area, for example at the house demolition incident near Tuwani. He claimed he was taking the  pictures because he was very afraid that such things would happen to other people. He was  dismissed with a vague warning that "You know that we are watching you."

- At the demonstration we also met Muhammad Jaber Nawaj'a who previously ran the school in Susiya. In 2015 he moved to run a new school in Shaab al-Butum east of Abigail. 56 students study there from kindergarten to tenth grade.

3. The demonstration about half a kilometer south of the Maon-Carmel co'shed, west of the road:

When we arrived, many vehicles were already parked somehow on the sides of the road south of the area. It was a silent demonstration by many Palestinians, against a takeover of the  land by a settler with a  bulldozer. Those present claimed that the area was privately owned by three families from Yatta. But later I heard from the Peace Now monitoring team that it is estimated that a breakthrough is being made to establish another agricultural farm, on large tracts of land that have been declared state lands since the 1980s, and may now have their allotment contract from the Settlement Division. So my assessment is that this breakthrough towards state lands is being made on private Palestinian land. The report from Peace Now is that the works are illegal because they do not have a valid building permit and plan.

While I was photographing the settler accompanied by the Kfir soldiers, the policeman (Avi Becker, according to his badge, there was another policeman with him in the car) approached me and demanded to know who I was and my guest. He proceeded  that we identify ourselves and register our details  with him, much to my very vocal displeasure - I argued that he did not continue by identifying and registering other citizens such as the settlers in the area. His reasoning was that it was a closed military area. At my demand to see a suitable order, he lied and claimed that he had such a document and would show me only after he had written down our details, as he did on a piece of paper  (not on the mobile computer). He threatened to arrest me and only withdrew when I reported to him that I had already been arrested in the past by the police during a demonstration (it was in Be'er Sheva during Cast Lead Operation), and that I had sued the police for illegal arrest, and won thousands of shekels in compensation

From then on, Kfir soldiers, including two officers with the rank of major, both conducted the "event." They pushed the silent Palestinian protesters away and even fired some smoke grenades. I walked amongst them protesting loudly , including  giving an orderly "lecture" about the Kfir Brigade which is not protecting  the security of the state and its citizens at all, since the state is far west of us, but protects a settler engaged in taking over land. That is, a brigade set up to carry out the oppression and occupation of the Palestinians in order to liberate the other infantry brigades for the service of defending the state borders. I offered them to sign up now for Breaking the Silence. They had to show me the order signed by Avi Zafrani, including a map of the barn and a circle drawing of the area to which the order applies. Again they lied by pointing out the place within the circle on the map, in practice we were not in front of the barn but about half a mile south of it meaning the order did not apply at all to the place of land preparation and demonstration.

The settler and his bulldozer immediately resumed work. If I had more courage I would lie down under the bulldozer wheels.

All the evidence I write here  of such an "event" is another wound in the human heart, in the Israeli heart, in the Jewish heart.

Friends from Yeruham sent a package to a son who serves in the Nahal and is now doing "employment" in the Carmei Tzur settlement area.  It was an opportunity to see the settlement, including its surrounding area.

- On Road 60 in front of Carmi Tzur, a sign "Lev Yehuda" announcing the implementation of the occupation by laying a road (yes, from the same Hebrew root) . This section is about Palestinian land. In the more northern section, between El Arrub and Gush Etzion, south of the Musa Alami farm, which according to the locals, was Jordan King Abdullah's land. The building is now owned by settlers. 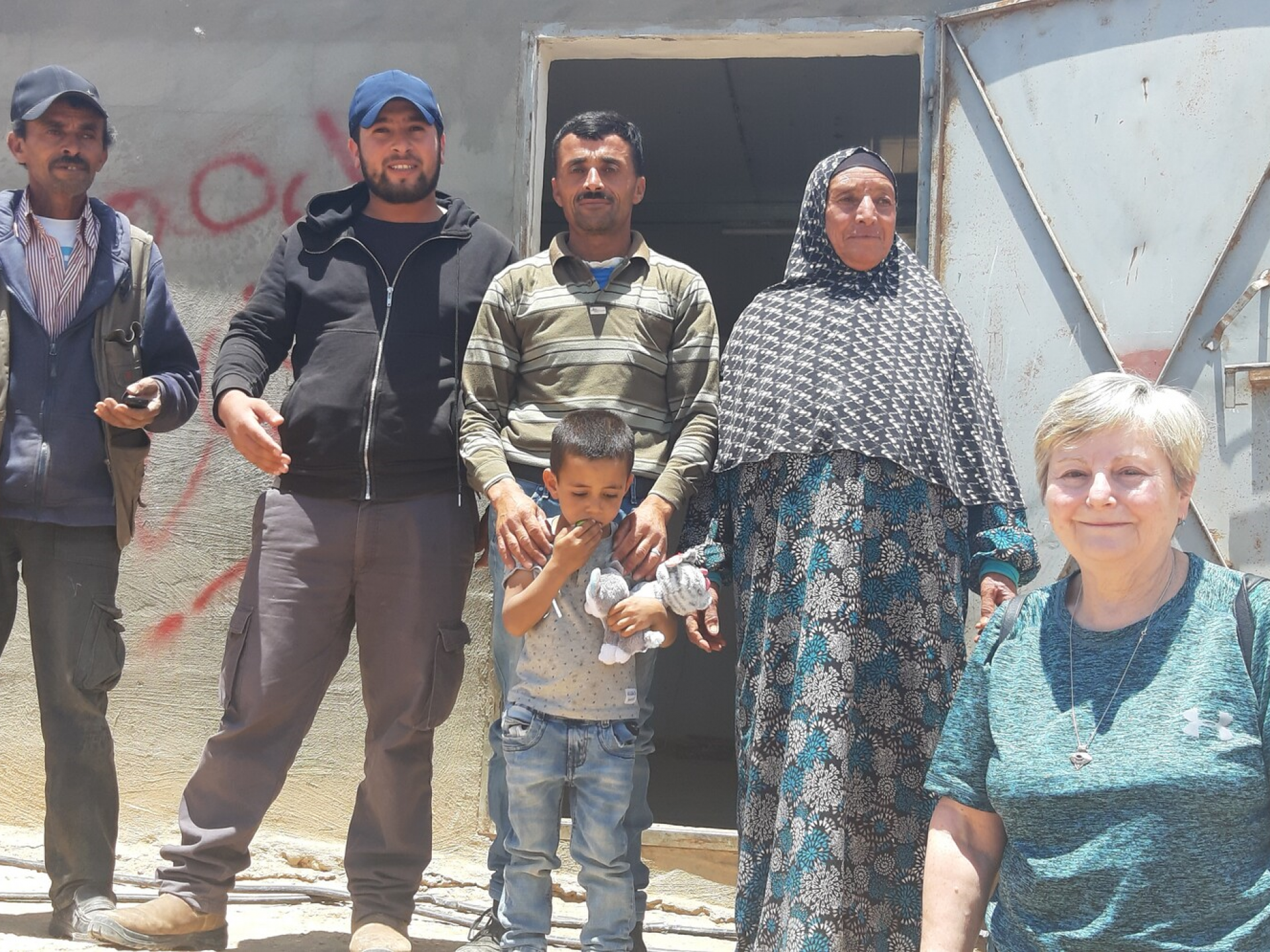