Checkpoint Ya`abed: For sale a real and cheap house in the Dotan settlement 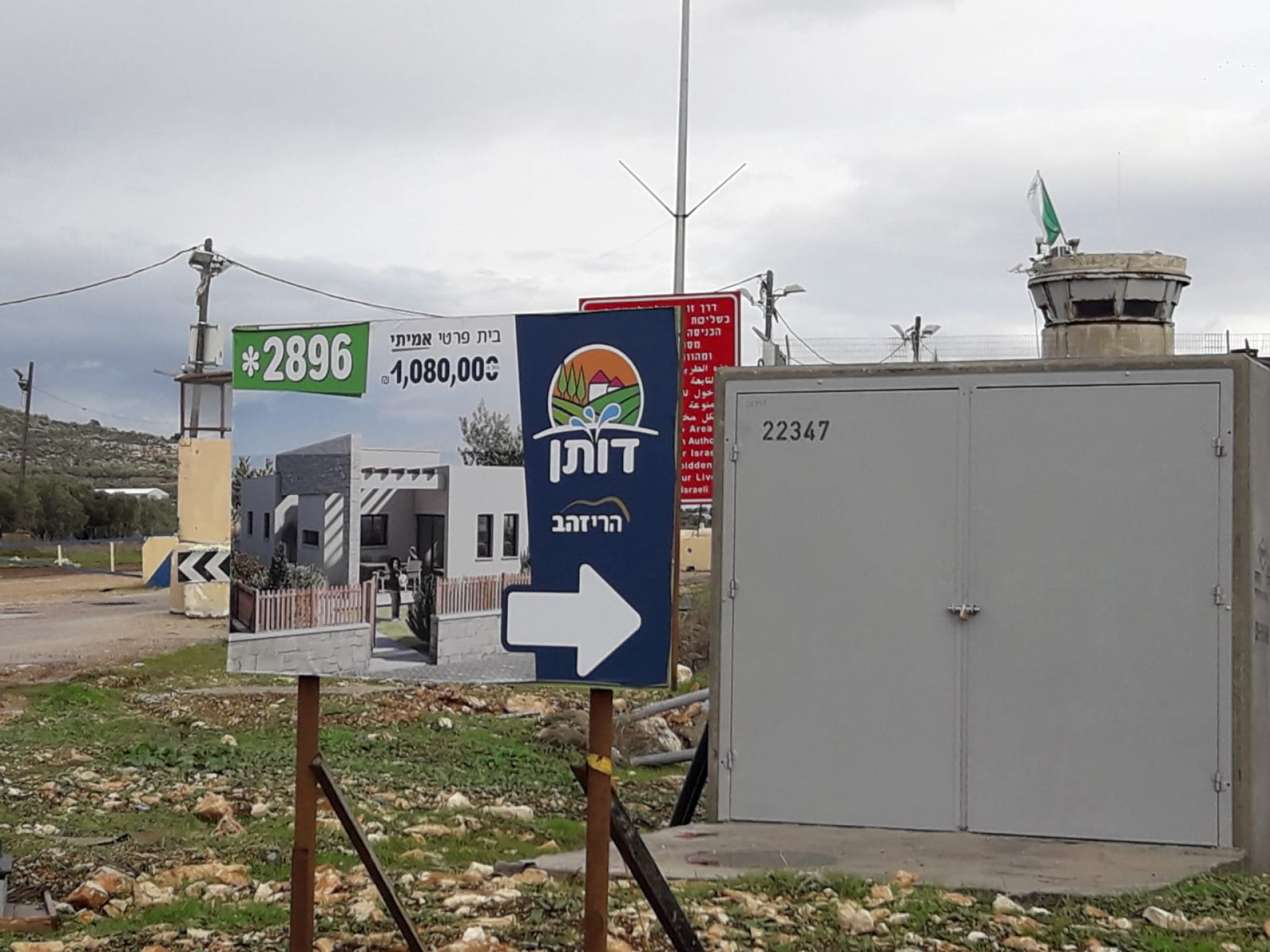 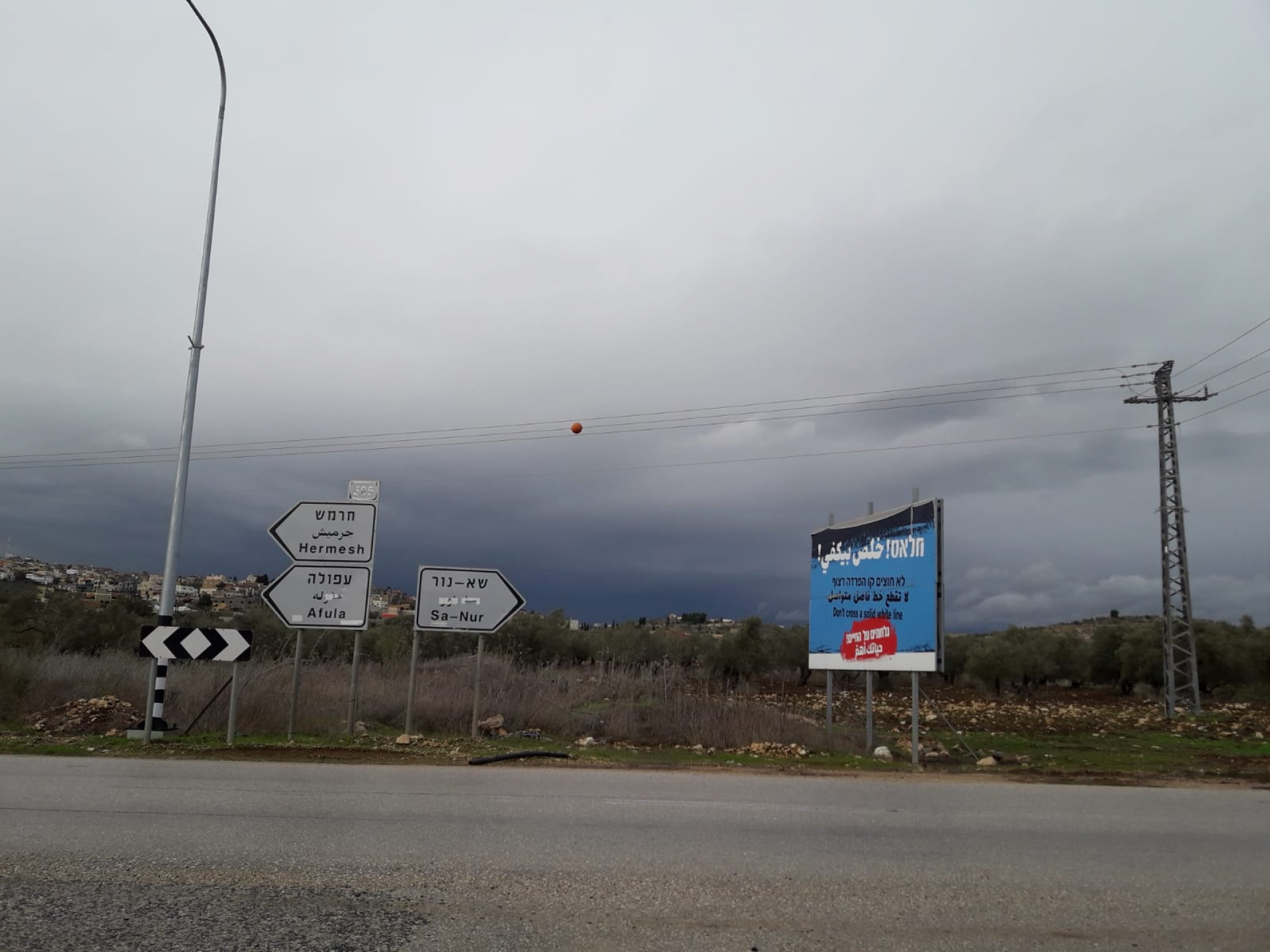 Two cars crossed to the seamline zone and one to the West Bank.  A woman crossed on foot to the seamline zone.  Only the wise people of the checkpoints know what all this sophisticated  monitoring equipment is doing in this empty place.  New superfluous buildings have been completed in the settlement of Shaked that are bright white in color.

We passed Barta’a Checkpoint and stopped in Emricha at the attractive store that belongs to our friend F.  She and two of her daughters received us happily.  We continued to Yaabed Dotan Checkpoint and saw children working in the field putting up low plastic covers over crops.  ON the way we saw a lot of military vehicles.

Traffic was moving freely in both directions.  It was slowed down only by the concrete blocks.  A colorful sign with the checkpoint facilities in the background advertised private homes on sale in the settlement of Mevo Dotan for a price of 1,800.000 Shekels.  The builder “Gold Mountain” does not mention that the houses have been built in a place where we have no right to be.  Another sign cautions drivers to drive carefully and not to cross the unbroken divider line on the road.  Next to this sign was a sign pointing to Afula and Sa-Nur (which has not existed since the disengagement and evacuation of northern Samaria in 2005).  The Arabic on the signs has been erased.  They did not reach the high sign pointing to Hermesh. There are, of course, no signs directing drivers to  the city of Jenin or Yaabed nearby.

As usual the road is open to everyone for everyone who is permitted to enter Area A.  A tractor entered the dirt road leading from the checkpoint to the watchtower. We wondered where it was going but we were hesitant to drive down the muddy road and follow it.

The parking lot was completely full.  The Palestinian attendants were still on duty.  Many drivers were waiting for passengers, and the younger drivers were passing the time together at the opening to the sheltered passage.  One of the drivers complained that there is no awning to protect them from the rain while they wait for passengers.   Another driver reminded us that he serves in the Palestinian police and Sylvia’s team was consequently unable to help eliminate his security ban.  20 years ago he spent three and a half years in the Ketziot prison because he was an activist in the Heroes of the Al Aktsa Brigade during the second Intifada.   Today he is the father of four and the NIS 3,000 is not enough to support his family.  He works as a driver to help earn a living and dreams of having his entry ban to Israel lifted and receiving a permit to work in Israel.  He also told us that as of December 31st 2019 people can enter Israel here in the morning for all people from the area of Jenin who have the appropriate work permit.  This is a significant improvement  over having to cross at the Ephraim  - Irtah Gate or Jalameh and saves time and money.  Two young people returned from work carrying colorful bouquets of flowers and others carried elegant bar stools.

Many workers were returning at this time of day.  We met W. who works in Barta’a and his younger brother S. who works on Route 6.  We met them when they were children selling coffee and snacks at this checkpoint and today they are married and have children.  Some of the workers bought  boxes of fresh cakes at the settler’s kiosk to take home for the weekend.  There were two inspection windows open in the terminal – enough for the small amount of people crossing to the seamline zone – most of whom were attractive smiling women.   People going home to the West Bank were crossing quickly.  Girls from a seminary were waiting  at the pick-up stop to go home.   They  told us that they were residents of Mevo Dotan.  A woman and her three tired daughters who were residents of Barta’a were waiting at the pick up stop on the seamline zone side.