Palestinian heritage sites (makams) out of bounds for Palestinians 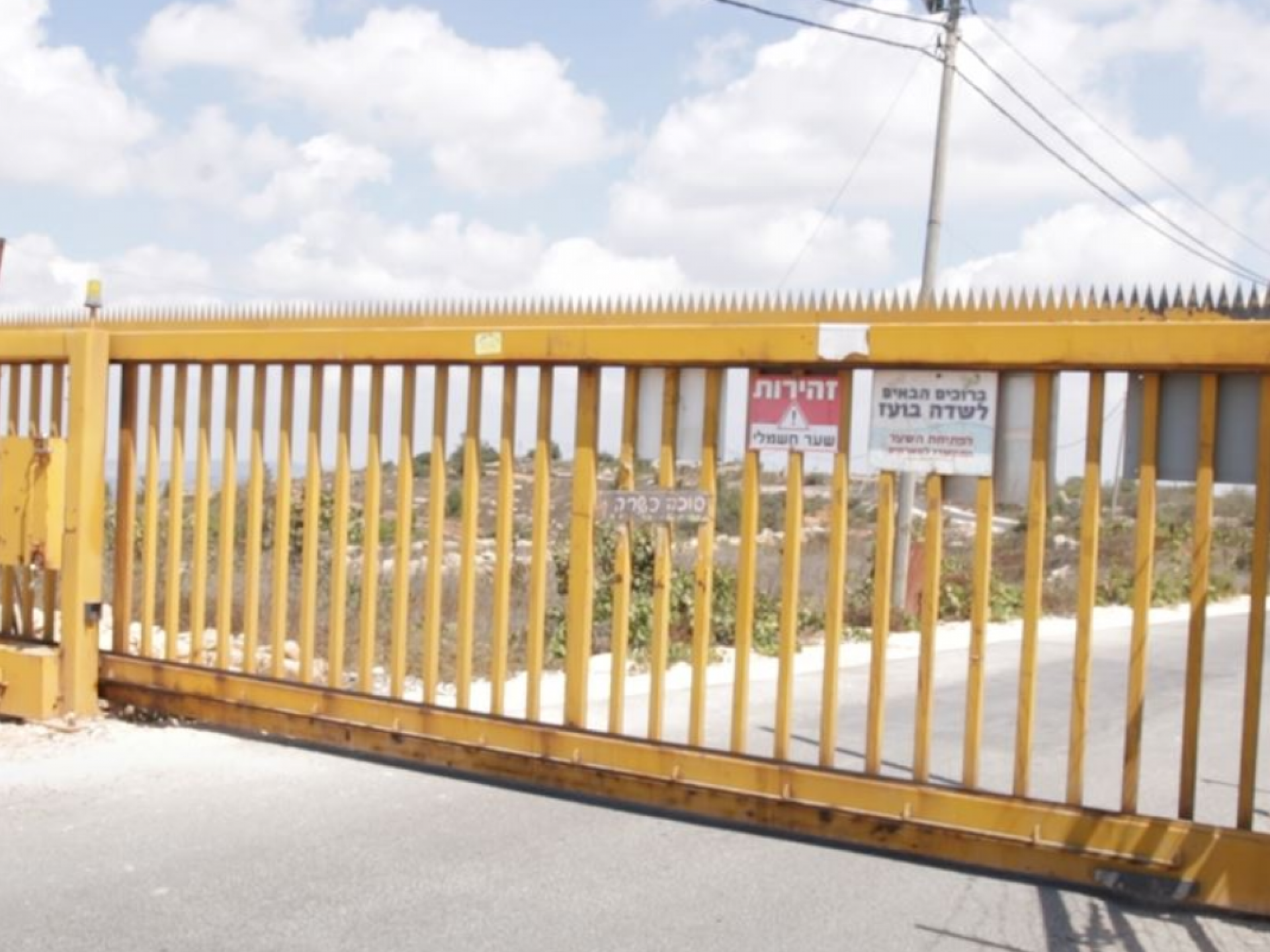 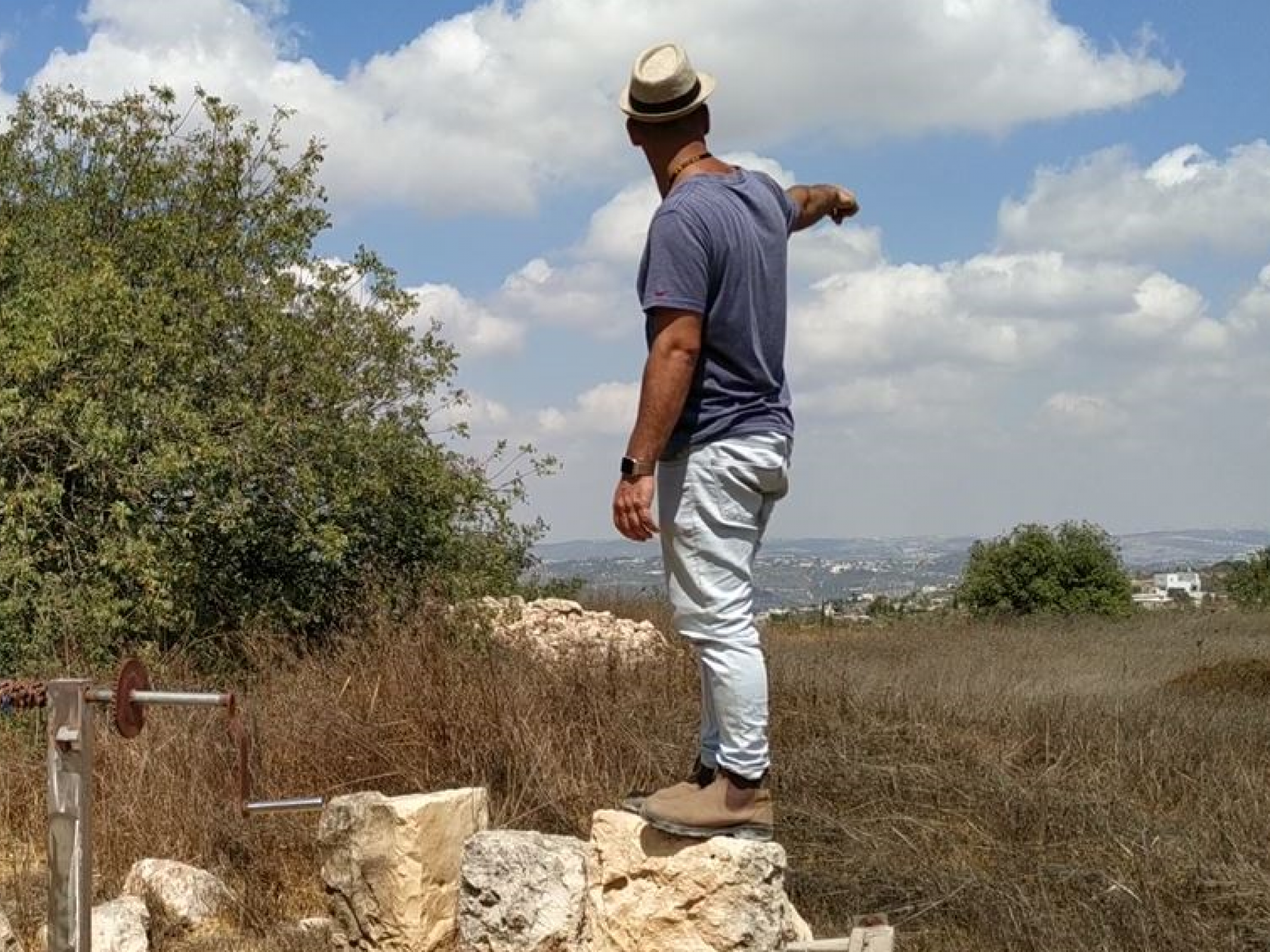 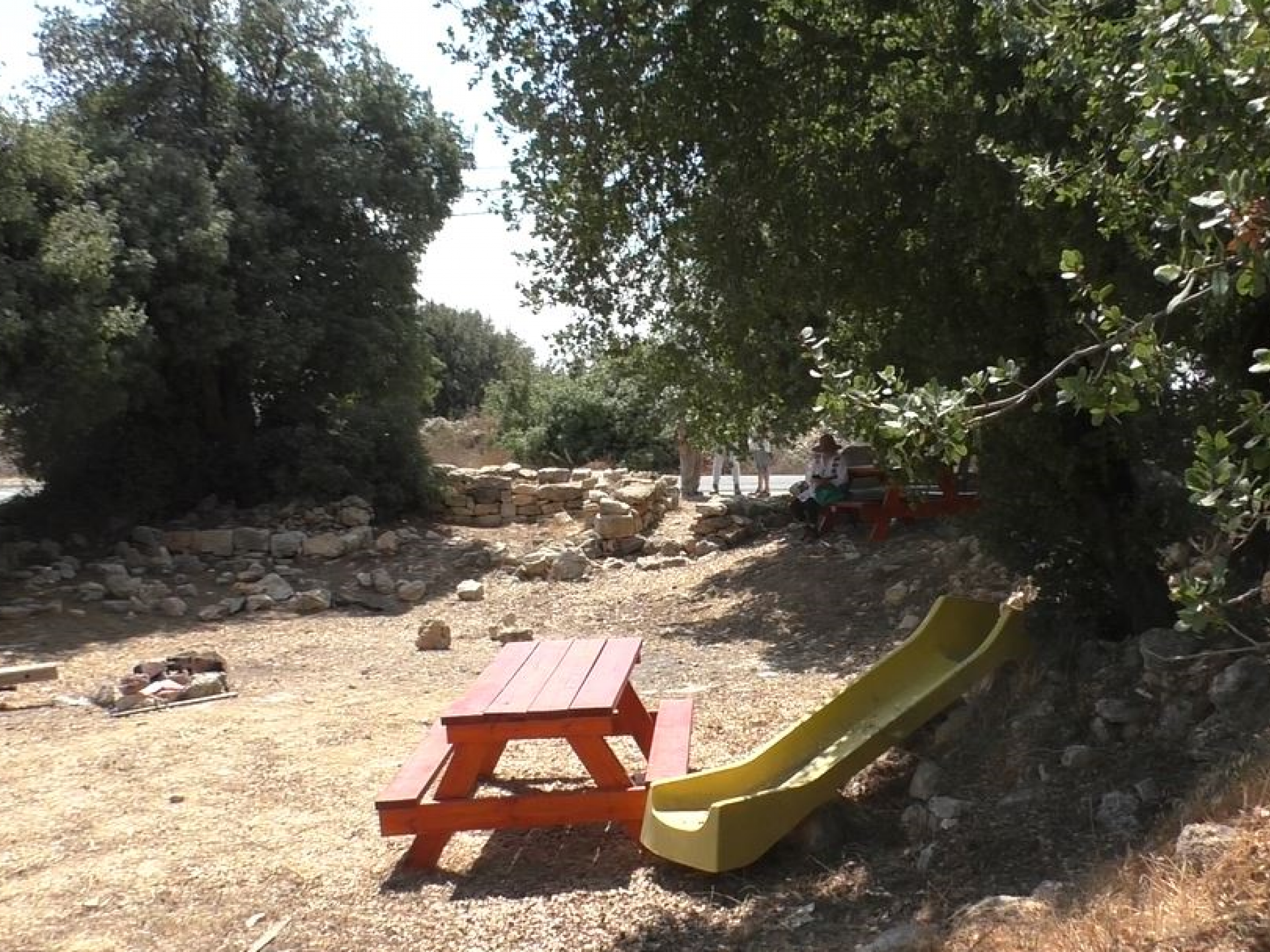 The entrance to the Nabi Zakkariya maqam compound 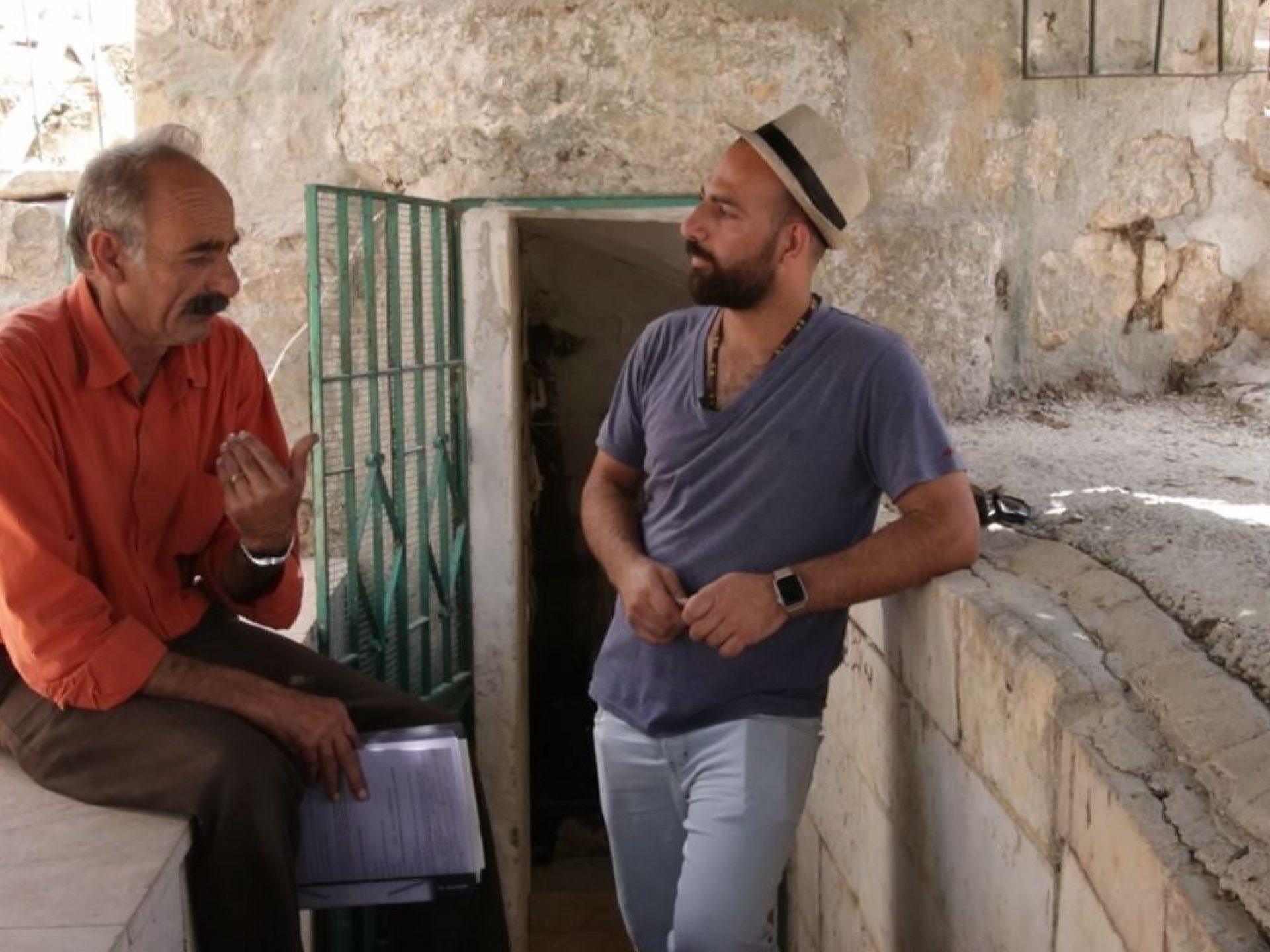 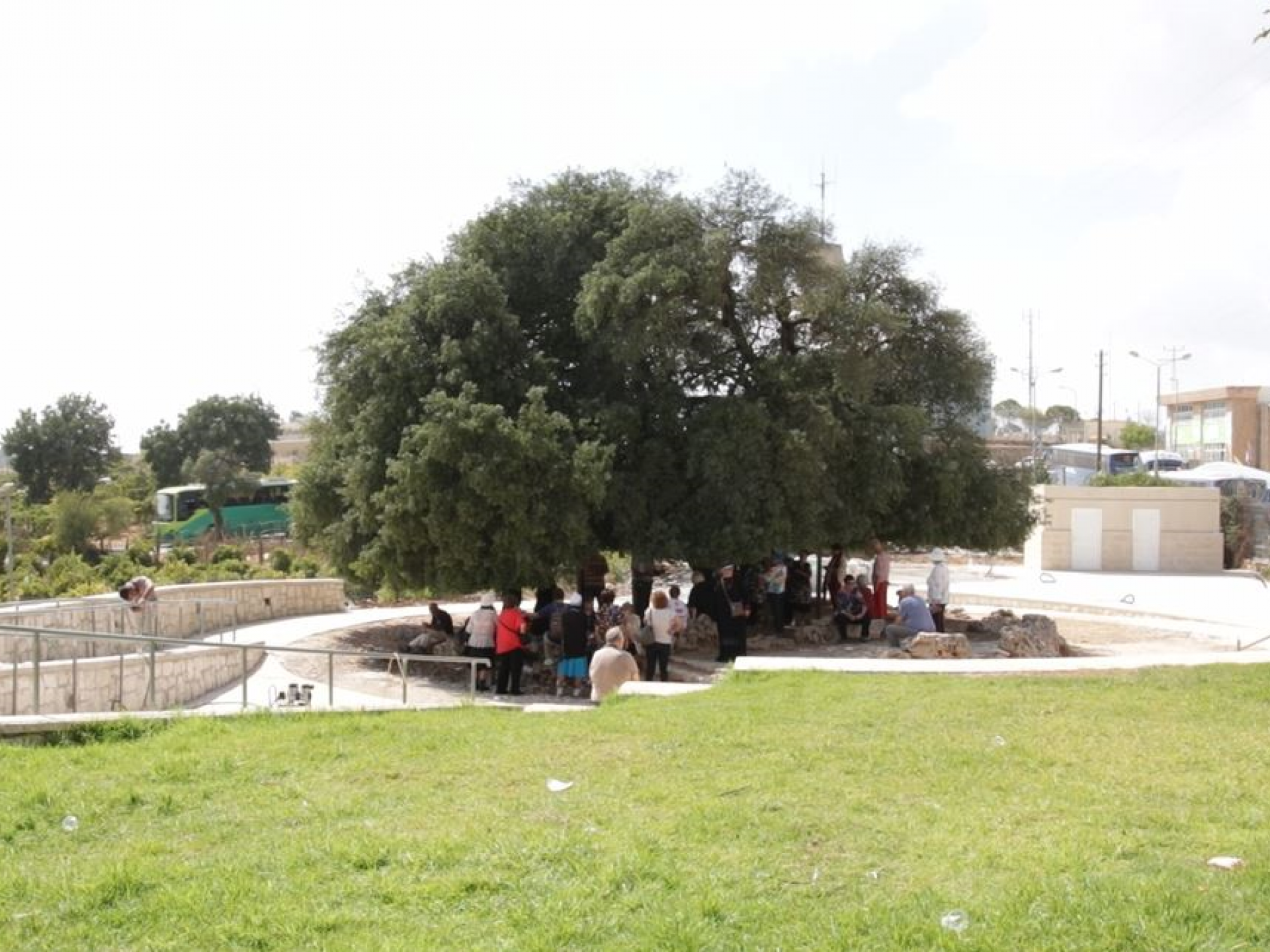 Our guide Musa studied tour guiding at a Bethlehem college. We met him on Saturday 10 days ago on a tour he led for Zochrot, familiarizing participants with Palestinian villages destroyed in 1948. Over these ruins the KKL (Jewish National Fund) planted woods in order to make them invisible. We realized he is very knowledgeable about the geography and history of the Etzyon bloc, his native area, so we invited him to guide us in this area.

We left Rosh Ha-Ayin at 9 a.m. for the Jewish settler-colony of Neve Daniel, situated where prior to 1948 the Nabi Danil maqam was located. Before entering this settler-colony we stopped by the roadside and saw two Palestinians riding donkeys. Musa told us that in order to reach and tend their lands they must cross the fast and dangerous road 60 thoroughfare.

At Neve Daniel, from a high observation point, for the first time in his life Musa saw his own village in this direction. In spite of his profession (tourist-guide) he is not permitted to reach maqam Nabi Danil since it is located between the settler-colony Neve Daniel and its outpost Sdeh Boaz. Musa told us about the village lands of Husan where he and all the other villagers are not allowed because of the Jewish colonies. Until two years ago they still could reach them, but since then the track has been blocked by piles of boulders. He showed us how the way from Palestinian village Al Khader to the lands has been blocked as well. He pointed out 1948-destroyed Palestinian villages in the area over which KKL woods had been planted. Descendants of the expelled villagers now live in the Deheishe refugee camp.

We crossed two checkpoints until we arrived at the maqam site – the entrance gate to the settler-colony and the exit point from there to the outpost of Sdeh Boaz. The latter is opened only to the Jewish residents. We waited until one of them would arrive and open the gate and finally managed to enter with the help of a local resident who has been living there for 14 years. The colony now exists for 15 years.

We turned towards the “1000/Millenium Observation Point” and reached the highest point where we assume the maqam had been located (nothing has remained of it). There are well-groomed oak trees growing there, KKL tables, and apparently the colonists maintain a well-groomed site commemorating a young man who was a military casualty. There is no sign of any kind of the Muslim holy site of the past.

The altitude here is very high and offers an amazing view of the eastern slopes of the Judean hills towards the Judean desert. To the north, the outskirts of Bethlehem are seen. A very tall antenna is decorated with a giant Israeli flat drawn over its entire height (ugly and depressing).

From Sdeh Boaz we proceeded to the south-west, passing by the settler-colonies of Elazar and Rosh Tzurim. We reached the Palestinian village of Bet Zakkariya. Two weeks Alon Lifshitz (of the Bimkom association –Israeli town planners and architects for equality and justice) was interviewed here. We met Abu Ibrahim, a village resident, who spoke about the history of the place. He asked us not to call it “Khirbet” Zakkariya for it is not a ruin but a village that has existed for centuries and its rightful name is Bet Zakkariya. The interview with him was videotaped by Yiftah. The village is very small and entirely surrounded by Jewish settler-colonies of the Etzyon bloc: Netiv Ha-Avot, Alon Shevut, Elazar, Rosh Tzurim, Kfar Etzyon, Bat Ayin…

The Israeli Land Administration has forbidden the Palestinians to place a sign with the name of the village at the entrance. All local communities – like Khalat Baluta – are a part of Bet Zakkariya village.  Apparently this prohibition to place a name-sign ties in with the denial of construction permission and creates small and separate communities, just like the Bedouin encampments in different places.

After the photographed interview at Bet Zakkariya (and after buying sweet grapes and raisins at Abu Ibrahim’s stand) we continued towards the “Lone Tree”. This is the tree about which the Jewish settlers of Etzyon Bloc used to long for and sing its sad praises after the fall of this settled bloc in the 1948 war.  We saw groups of Israeli tourists crowd around it (a small amphitheater has been built there) and excitedly listen to the story of the Etzyon bloc and its residents’ longing for this huge oak tree.

At the suggestion of guide Musa we continued on road 3157, viewing from afar Palestinian Tuku’a and next to it the Jewish settler-colonies of Teko’a and Nokdim (Avigdor Lieberman’s home community). Our guide our attention to the speed with which Nokdim was developing.

From afar we viewed Herodion – Herod’s Mound – which megalomaniac Herod erected as his mausoleum, and I thought of the megalomaniac State of Israel that tells itself that it can rule forever over millions of Palestinians denied of any basic human, civil or other rights.

After the 1967 Six Day War, Jewish settlement in Gush Etzion was renewed, and since then another 14 settlements and 10 outposts have been established. According to the info-icon of the Civil Administration, Gush Etzion is now 7 times larger than its historic area, and the Jewish lands purchased before the evacuation in 1948 constitute less than 15% of the large settlement bloc of the Gush Etzion Council today, which Israel demands to annex in the permanent agreement with the Palestinians.

The Palestinian localities in the area are concentrated in enclaves, the largest of which is in the east - the Bethlehem area, which includes Beit Jala, al-Khader, Beit Sahur and more. To the west are settlements such as Husan, Nahalin, Al Jaba'a and Batir and small and ancient agricultural villages such as Shushahala, Khalat Sakaria and more. These are scattered on the last agricultural land left by the Palestinians in the area. In the 2000s, many illegal outposts sprang up, taking over private Palestinian land under the auspices of the administration and the army, trying in an extremely violent way to evict farmers from their land and homes and thus expand the settlements. Watch the video about the harsh reality in the Shushalah and Makam Nabi Daniel area.

During the 1990s, the new Road 60, most of which is forbidden to Palestinian traffic, was paved, and a separation wall was built next to it. Access to many of the Palestinian villages and agricultural lands in the area was blocked, and a buffer was created between the villages themselves as well as between them and the lands they owned. The layout of the settlements and the network of roads and checkpoints in the entire Etzion area indicate the intention to create a territorial and transportation continuum between Gush Etzion and Jerusalem.

Machsom Watch members have been active in the  for many years.  We talk to the Palestinians at intersections, DCOs, villages and Makamim (ancient Palestinian heritage sites) and try to publicize the looting, apartheid and violence they are experiencing. You can read about their activities in the attached reports.

in 2021, after many years of negotiations, the Civil Administration issued a new plan for the central village of Khirbet Bet Zakariya, including construction permits. The adjacent settlers protestated and asked the minister of defence to cancel the permits. Our members are in contact with the village and are trying to involve other organiztions  and use public opinion and  to stop this cancelation.
-