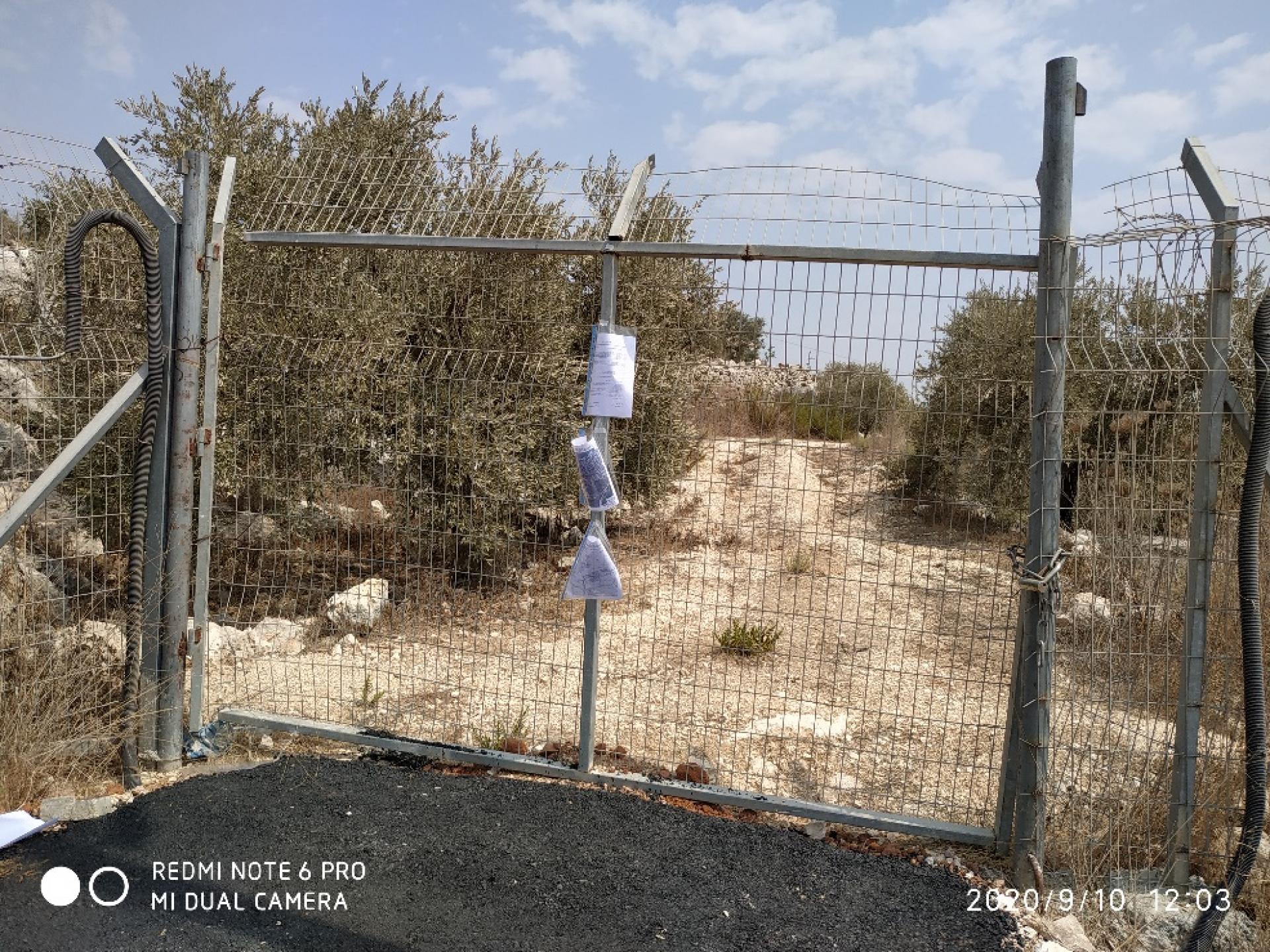 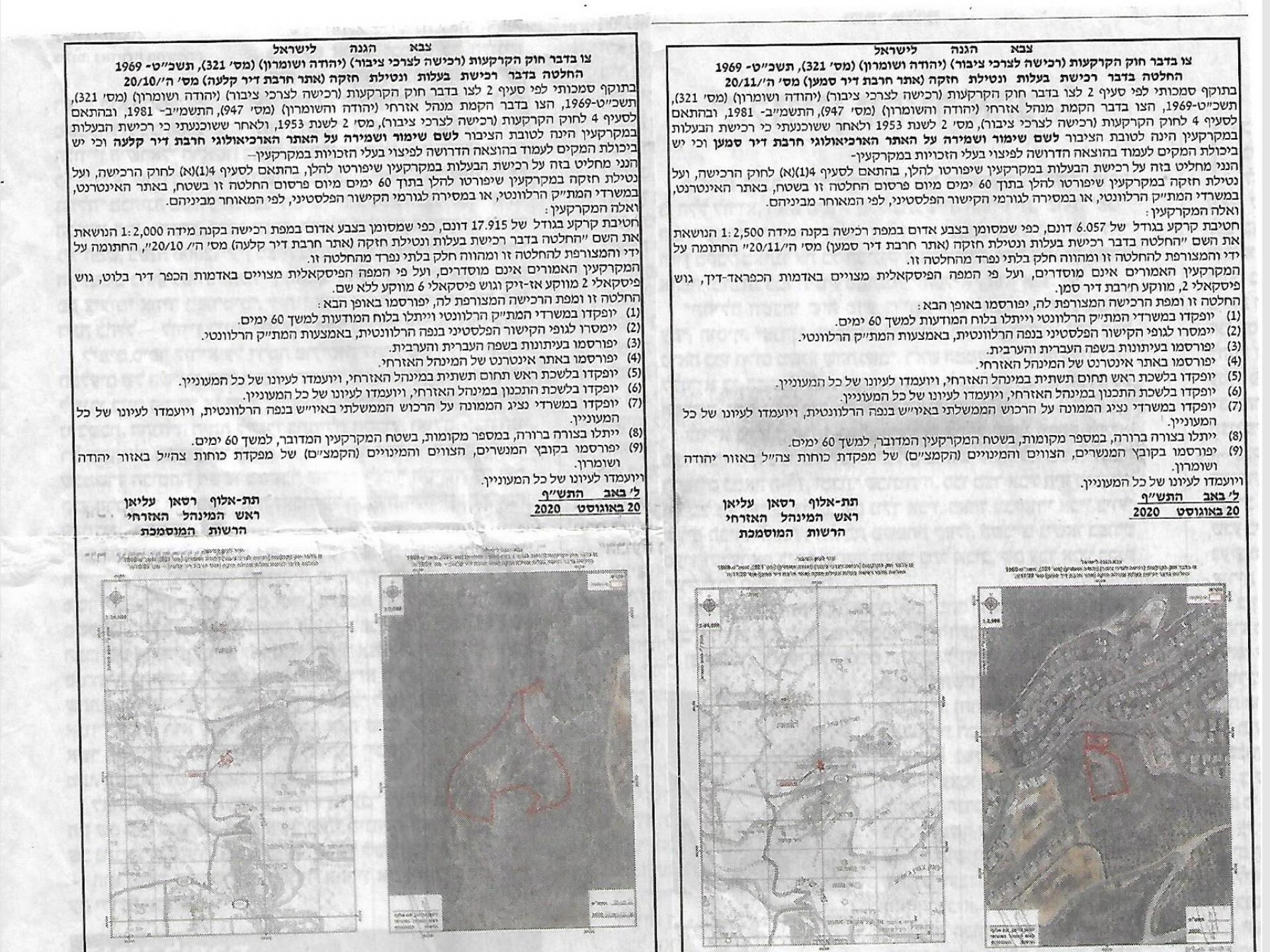 Notice from the IDF. Order regarding the Land Law. Published in Haaretz newspaper on August 21, 2020 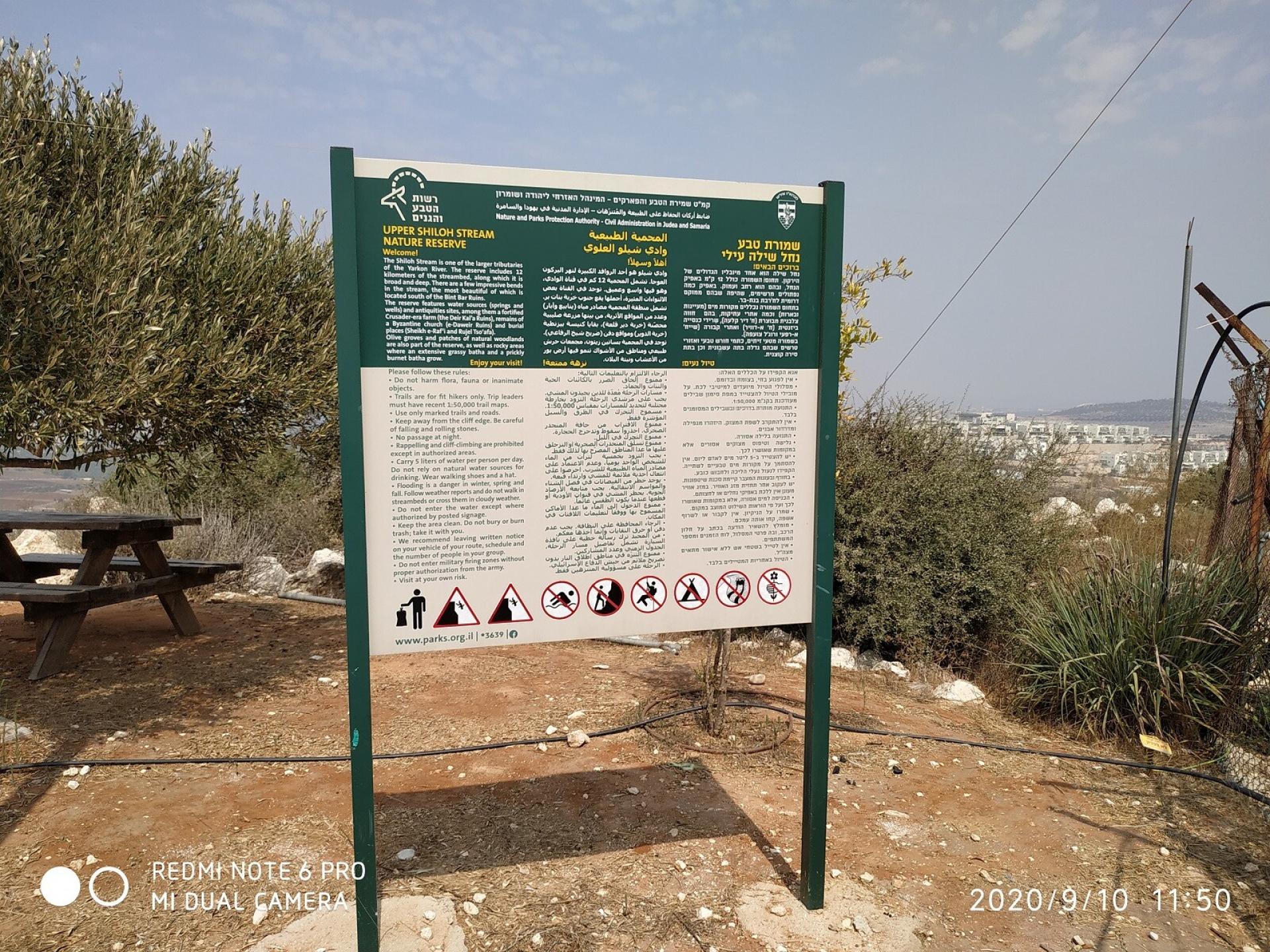 Near the entrance to Deir Qala, a large sign of the Nature and Parks Protection Authority informs about the Nahal Shilo Ili Nature Reserve 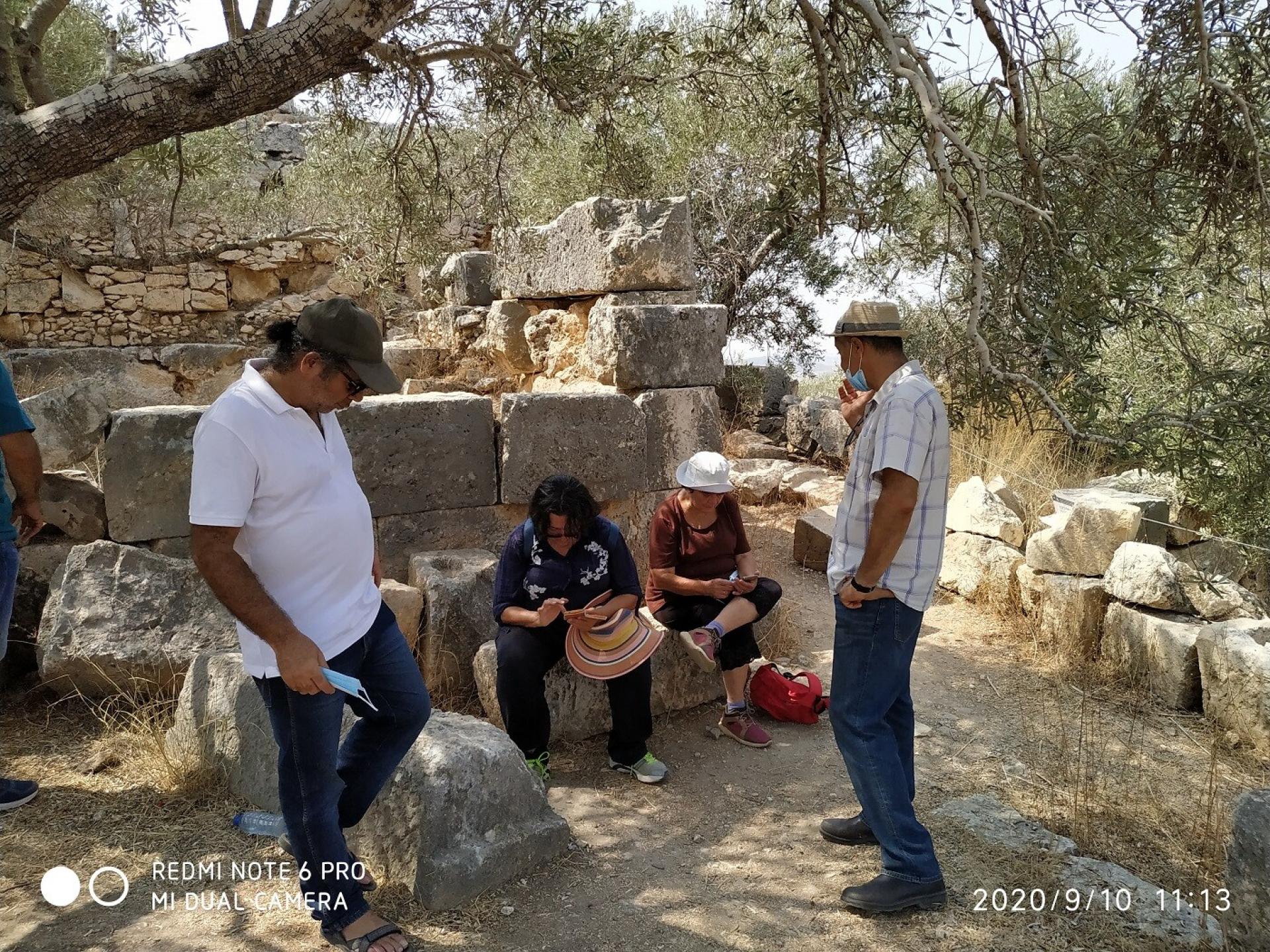 Waiting for Z. near the entrance to the Byzantine church 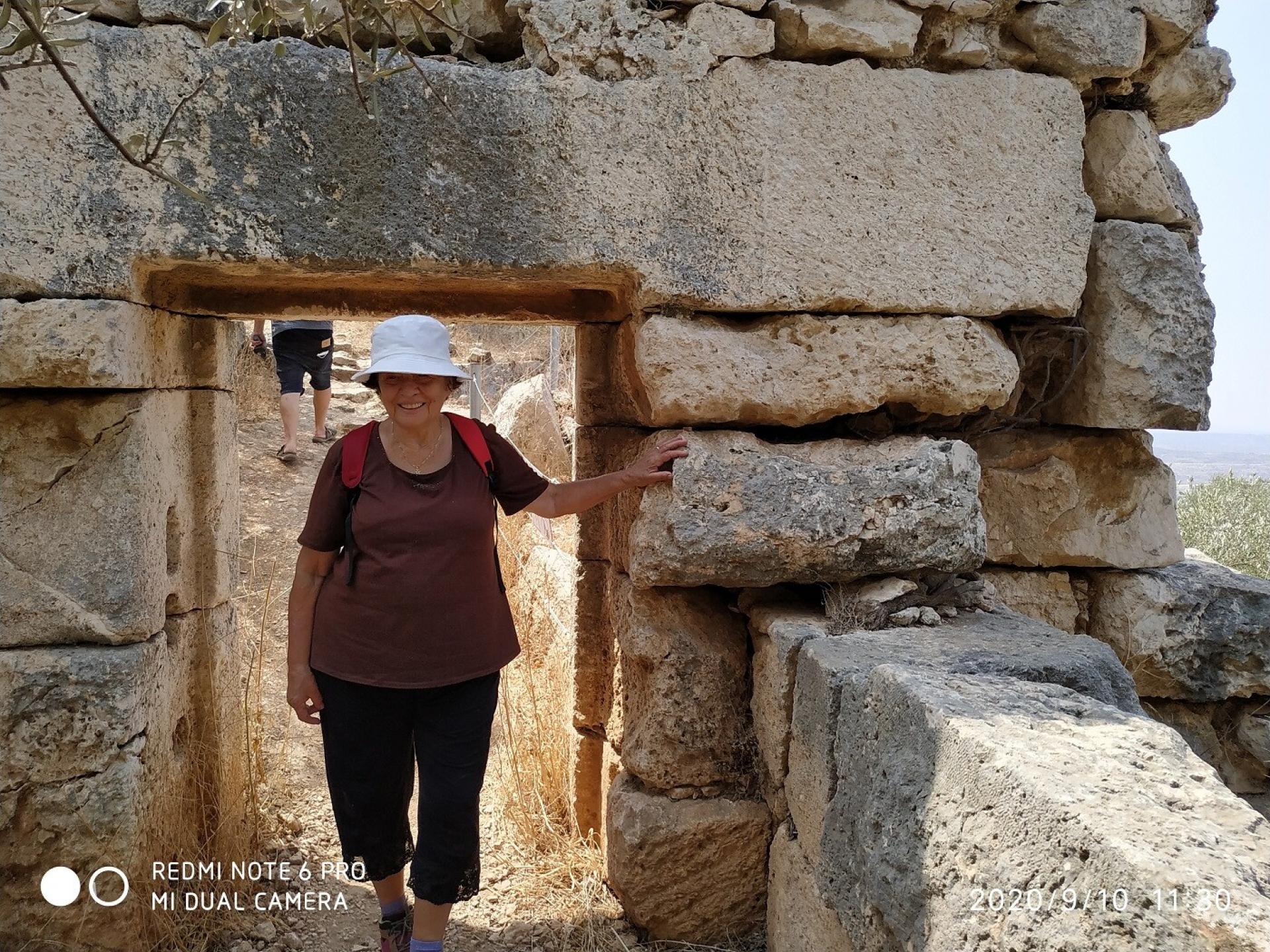 The gate to the Byzantine church 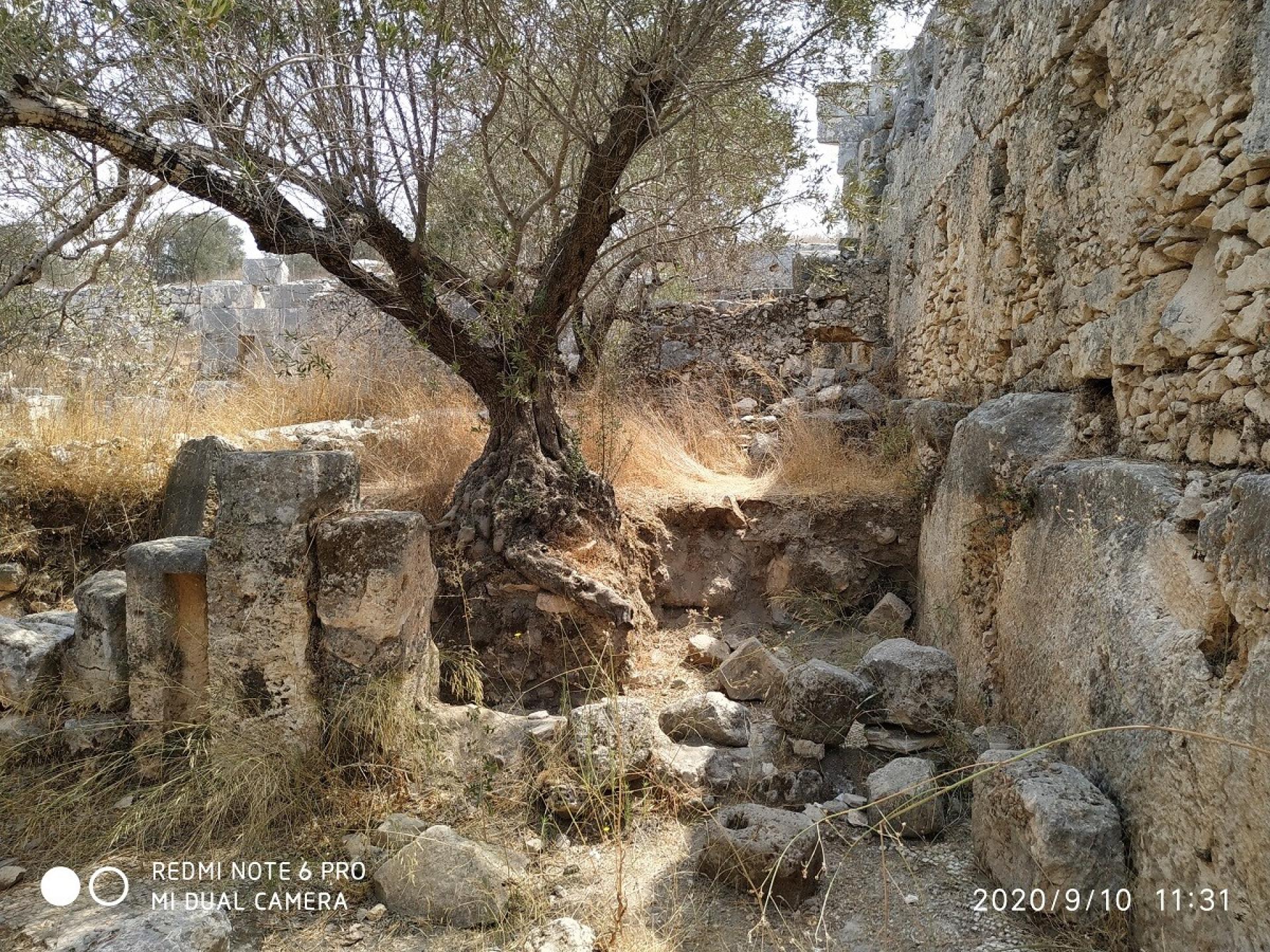 Olive tree whose roots were exposed due to army excavations 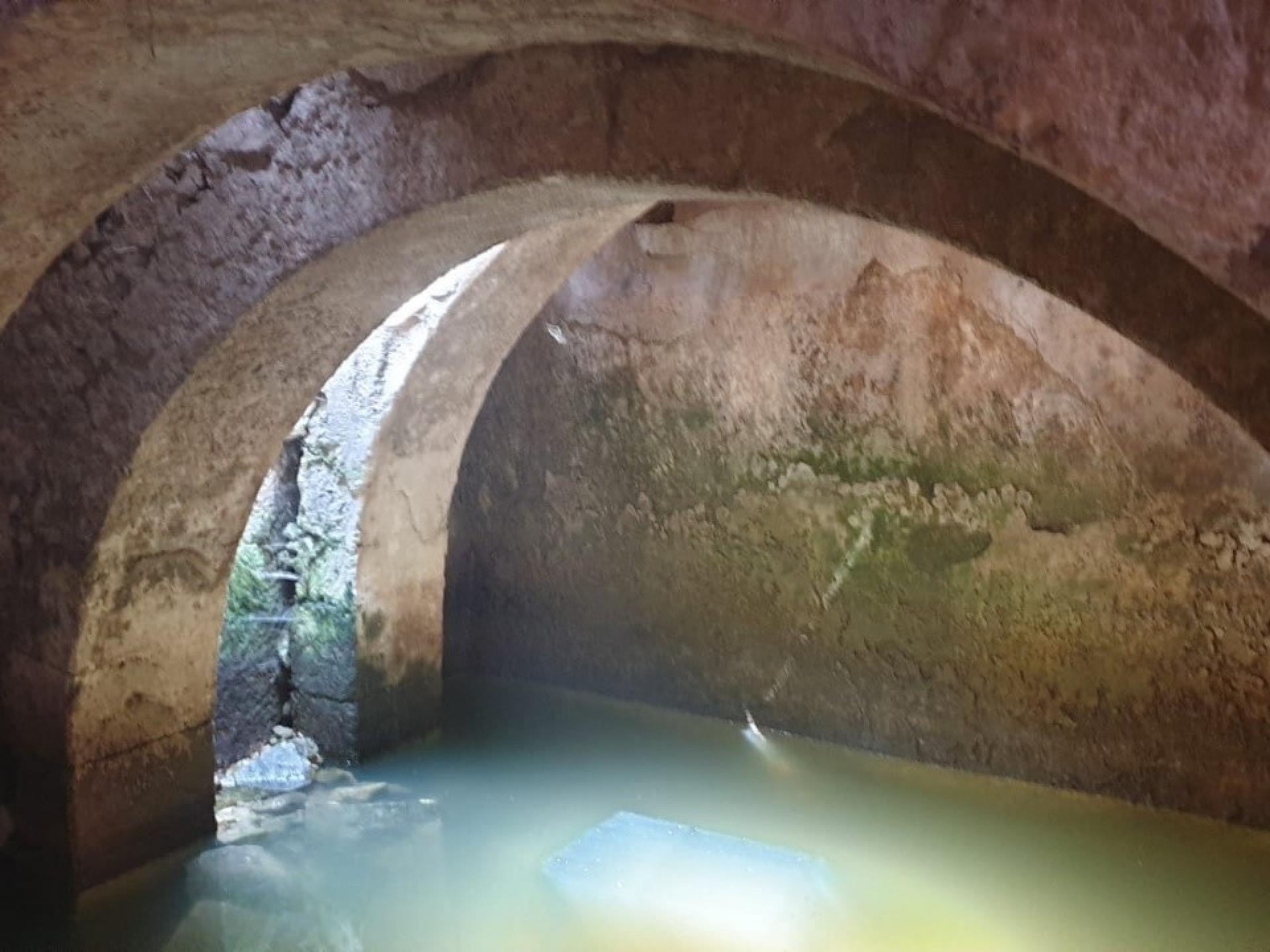 Irrigation pool at Deir Sam'an turned into a Mikveh 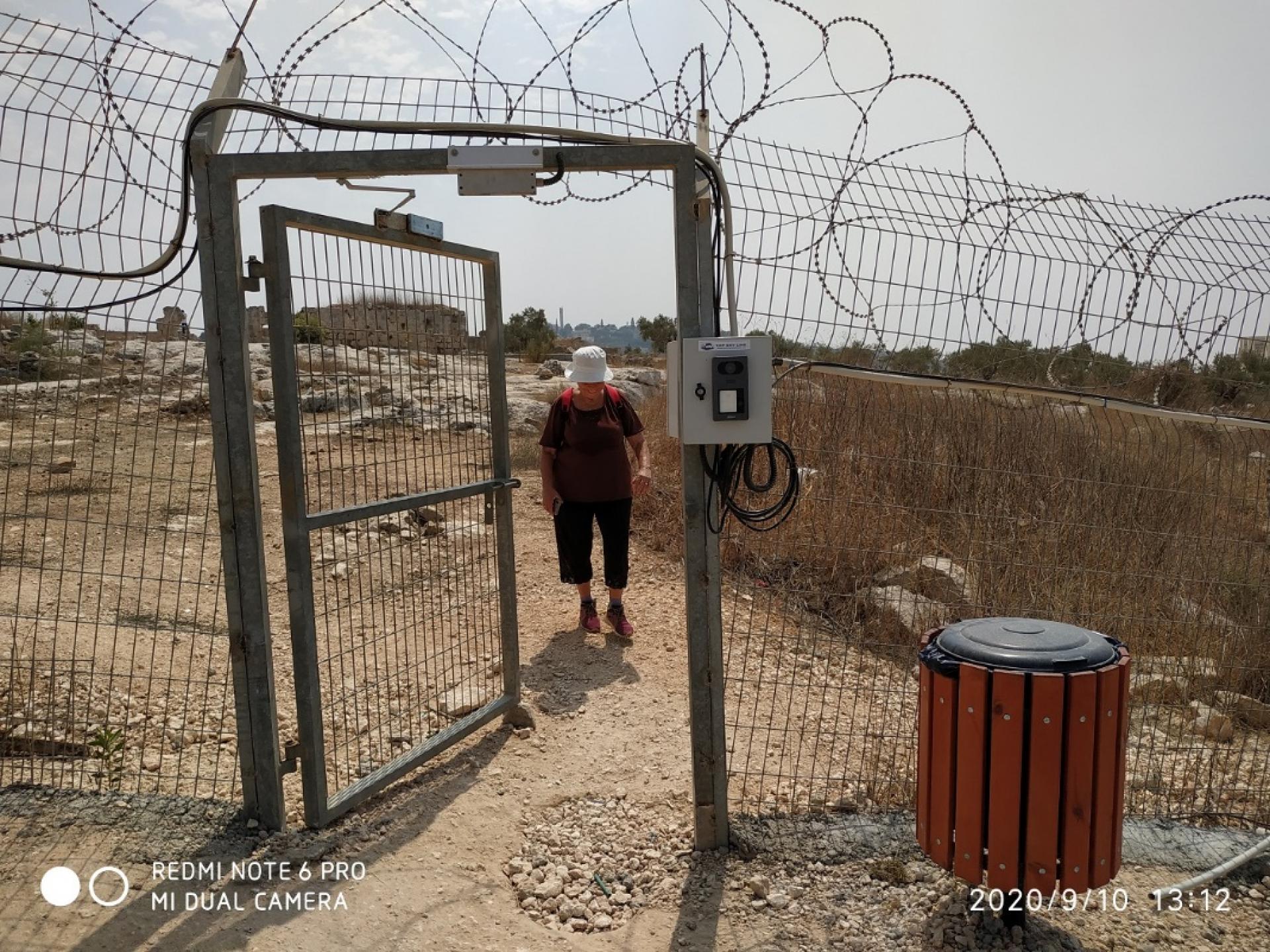 The gate to the site through Leshem settlement

The gate to the site in Deir Saman through Leshem settlement 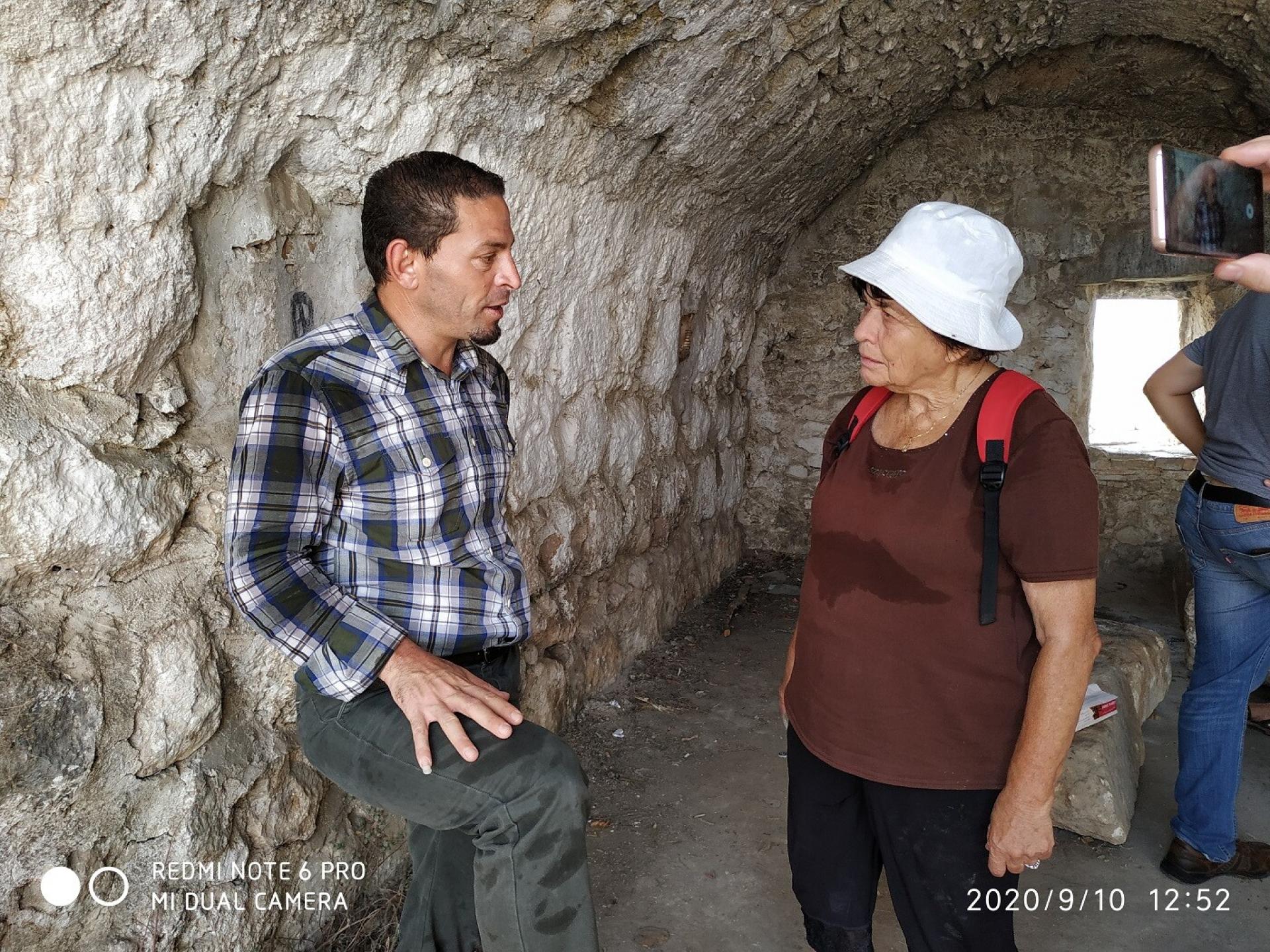 The ancient structure in the Deir Sam'an

Zvia and P. at the entrance to the ancient structure in the Deir Saman where P.’s father died

On August 21, 2020, Haaretz daily newspaper published a notice on behalf of the Israeli armed forces, declaring:

1.Ruling to take over ownership and holding of Khirbet Deir Sam'an

2. Ruling to take over ownership and holding of Khirbet Deir Qal'a

Both are beautifully impressive archeological sites of the Byzantine period.  Their walls are of huge hewn stones, parts of decorated pillars, mosaic floor, water pools – all parts of the impressive remains. They also include ancient olive trees and surrounded by olive tree groves.

The two sites are very close to each other, separated as the crow flies by about 600 meters.

Deir Qal'a at present is situated within the settler-colony Peduel's jurisdiction area. Its legal owners are a family from the Palestinian village of Deir Ballut.

Deir Sam'an is literally a cage inside settler-colony Leshem, that is rapidly expanding. Its owners reside in the Palestinian village of A-Dik.

During our shifts for the past 4 years we made the acquaintance of the owners of each of these sites and even visited them at home.

Following the notice in the paper, we decided to join a tour conducted by Yoni Mizrahi of Emek Shaveh organization, coordinated with Z, the owner of Deir Qal'a and P., owner of Deir Sam'an.

We met Z. at the Deir Ballut junction. From the family's home, we already saw 3 years ago how the bulldozers change the terrain, preparing new grounds for construction. The authorities reached their home and confiscated farmland tended by the father of the family.

From the junction, we continued to Deir Qal'a through the Peduel settler-colony – the only way there by car. Z. mounted the hill towards the archeological site by dirt tracks, since as a Palestinian he is prevented from passing through the settler-colony. We felt embarrassed not to be able to drive him with us.

The entrance to the site is through an electric gate. Closeby stands a large sign of the Nature Preservation staff officer, announcing the Shilo and Eli Nature Reserve.

And indeed a look at the Amud Anan website (based on Israel's trail map of the Society for the Preservation of Nature) shows that the site is included in the nature reserve. Some of the houses of the settler-colony are included in it according to the same map.

At the site, we met a team of Emek Shaveh: Yoni Mizrahi, photographer Uri Erlich and researcher Mohand. With them was journalist Amira Hass.

Meeting Z. in the shade of the pillars and walls of the ruined Byzantine church, we heard how settler-colonists have taken over the site, picked the decorated mosaic floor that had been there and passed it over to the Good Samaritan Museum courtyard.

He told us how his grandfather had taken care of the site. Olive trees, vegetable patches, a waterhole for irrigation. He would spend hours there with his flock. Some of the places he showed us indicate digs that the Israeli army conducted there. Bare olive tree roots are evidence of that. The site is strategic.  A magnificent landscape is seen from that lookout. It is a great observation point of the Palestinian villages in the entire area. The digs served the army for hiding while observing the villages.

Deir Sam'an is caged inside the settler-colony Leshem which is undergoing accelerated expansion in recent years and taking over farmlands of Deir Ballut and Kafr A-Dik. It's owners live in Kafr A-Dik.

The archeological site of Deir Sam'an is located somewhat to the north of the other side of road 446. We crossed the barrier to enter Leshem. After passing it, a paved road climbs up the hill, with a fence along it. At the end is a locked gate with plastic bags containing pamphlets informing about the confiscation plans. The gate blocks the way leading directly to the site.

In a previous visit we entered the site here, by the track that does not pass between Leshem homes. F. took us on a tour in this archeological site in February 2017, showing us the place where his father had passed away while resting from a routine day's work. He led us among the ancient structures and items that were preserved and showed us places where stones had been moved or taken. Painfully he showed us an olive tree grove, within the site terrain, that are being destroyed by the works conducted to expand the settler-colony of Leshem.

This time, since the gate was locked, we turned back and drove through the new parts of the settler-colony. We passed by houses built mostly during the past 3 years. The site, in the heart of the new neighborhood, is fenced, including an electrical gate opened by pressing a button. We stayed in a shaded structure with a domed ceiling. F. got there by another path, with Firas and Pdaya of Yesh Din.

F. who recognizes the historical and cultural worth of the place he owns expressed his dream – to reconstruct and rehabilitate the place to serve as a visiting site for Palestinians and tourists the world over who are interested in the history of Palestine. He knows every stone and every item, and indicated places from where findings were taken, probably by the Israel Antiquities Authority. He still attempts to tend the olive tree grove, in spite of the difficulties of accessing it. He is forced to walk a considerable distance because of the locked gate. Mostly he is sorry that his elderly mother, suffering from difficulties walking, can no longer visit the area which his father was used to come and tend, and where his life ended.

He pointed to a magnificent underground pool, accessed through a tunnel dug in the rock. From there, his father and family would bring up water for irrigation. At present, the pool serves as a Mikveh for the settler-colonists.

Finally, comments of Emek Shaveh (appear in their website):

For the past 2 years, we witness increased pressure by settler-colonists associations exerted on the Civil Administration and the staff officer for archeology to expand the use of archeological sites and push the Palestinians out of Area C. Whereas in Susya, a synagogue was found and one can understand the motivation behind its confiscation from the Palestinians, the choice of confiscating two Byzantine sites standing for over a millennium is strange and attests to the escalation of such tendencies and the effect of the settler-colonists organizations upon the Staff Officer for Archeology.