Anin Checkpoint: When do they open the checkpoint? When they open it | Machsomwatch
Skip to main content
Back to reports search page

Anin Checkpoint: When do they open the checkpoint? When they open it

When is A’anin Checkpoint be opened during the olive harvest?

We left for the checkpoints in the afternoon, but the telephone shift already began at 07:30 in the morning.  M., the tractor driver from A’anin, called to report that the checkpoint had not yet opened.  There was another tractor driver and about a dozen other people waiting.   He explained that the checkpoint was supposed to open at 06:30 and the District Coordination and Liaison Office  had announced in writing that the checkpoint was supposed to open at 07:00.   I called the District Coordination and Liaison Office  and they said that they would find out and get back to me.  I called again but they were still “finding out.”  Shuli also called her sources.  At 08:10 we were told that people had crossed, but they had crossed only at 08:20.

At 14:30 we drove past the crowded parking lots at Barta’a Checkpoint  and crossed the village of Emricha.  .The garbage containers were present along the way were overflowing and we had no idea who was responsible for taking the garbage away.

There were not many cars crossing in either direction and traffic was moving.

The entire parking lot was full included the reserved spaces.  Palestinian attendants were walking around.  A few people  were returning from work at this early hour and drivers were waiting for them.  We met Sh., whom we have known for a long time,  who used to run a makeshift kiosk in the parking lot.   The supervisors at the checkpoint did not let him continue making a living that way so he became a driver until he was injured in a traffic accident.  He now walks with a limp, but continues to smile.  The current kiosk which is permitted is a red food cart.  I bought a red passion fruit flavored ice for NIS 4.  A few people complained that they had been banned from entering Israel by the police or special services and we gave them Sylvia’s card and wished them luck.  One man complained that he was banned by the Special Security services but had never been arrested or stood trial.  He is not the only person in this situation.  People need permits even when the security fence is full of holes.

At M.’s request we arrived at the checkpoint at 15:30 to see the opening of the checkpoint for ourselves.    The District Coordination and Liaison Office  informed us and wrote that the checkpoint would open at 16:00,  but during this year’s olive harvest the checkpoint opens any time between 15:30 and 17:20.  Usually at 15:45.  The army is flexible…

Only M. with his tractor was waiting to cross and where the other harvesters were we could only guess.  The muezzin called from A’anin and utilized the time for prayer.  A car crossed and drove along the fence and another car with women soldiers drove up and stopped next to us.  The driver, a  captain, asked who we were and when we told her we were from Machsom watch she said, “great”.

15:45 – A border patrol vehicle arrived.  The policemen got out and removed one of the yellow pillars that block cars from passing and opened the gate.  M., his son, and their tractor crossed.  We tried to clarify when the border patrol was supposed to open the checkpoint but got no answer.

16:00 We left the checkpoint  School workbooks were left under the waiting shed.  We didn’t see any people or tractors on their way to the checkpoint. 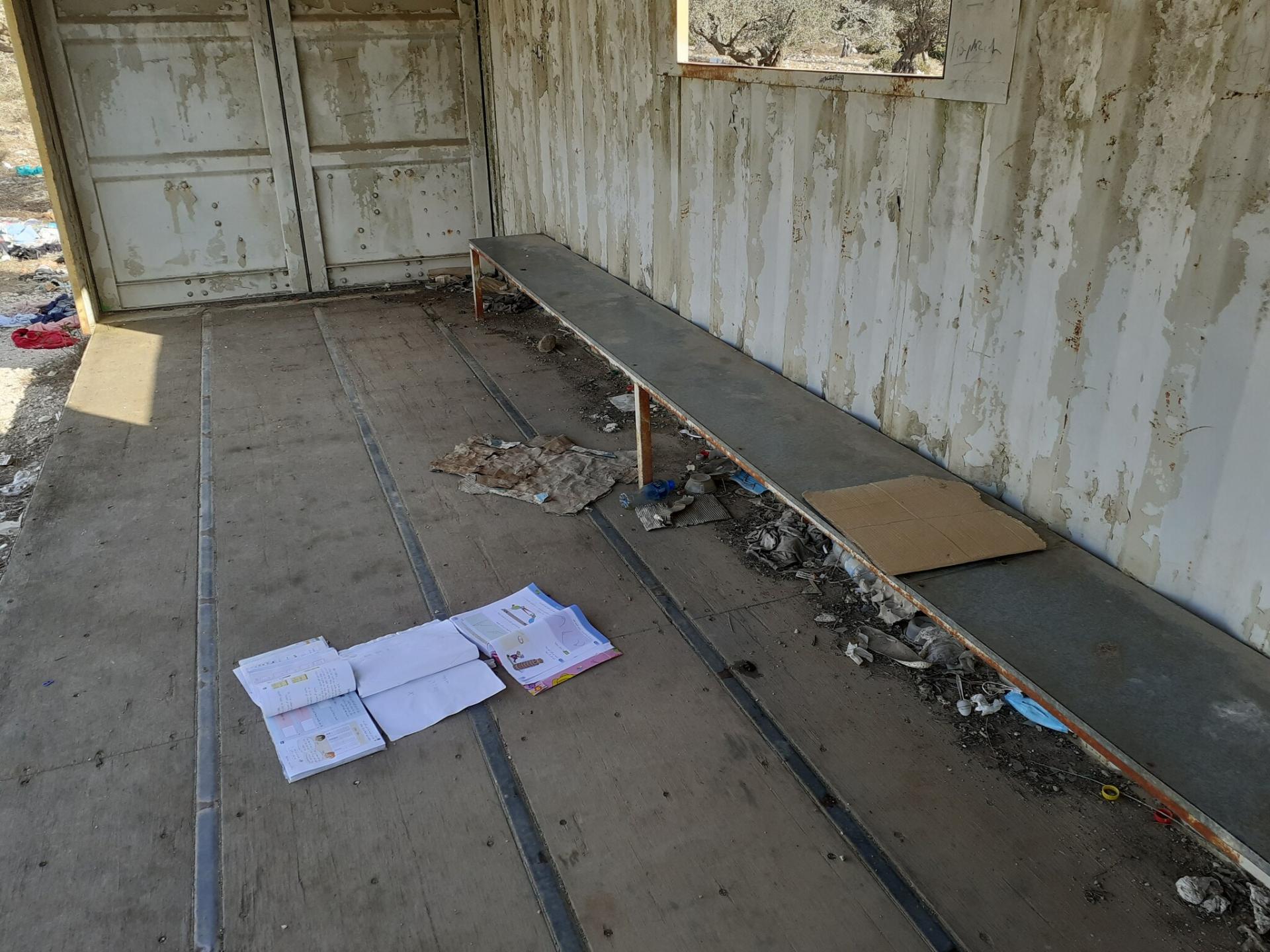 Anin CP: Homework was forgotten at the checkpoint