Anin checkpoint: Even today they were late to open | Machsomwatch
Skip to main content
Back to reports search page

Anin checkpoint: Even today they were late to open

Here and there along road 611, (from Barta’a Checkpoint Junction to Harish City), dozens of Palestinian workers wait, having arrived from the West Bank and crossed the breaches in the Separation Fence in order to work inside Israel or in the seam zone. Transport vehicles of all types pick them up, don’t waste time. At the eastern Barta’a junction, only a few vehicles are parked, and the busy traffic of pedestrians crossing here from the West Bank to Israel is not visible. Perhaps it is still early, or perhaps they are picked up for work even earlier along the road, before getting here.

We entered Umm Al Fahm from the Mei Ami side, stopping at the gathering point of Palestinian workers who come from the northern West Bank (Jenin district), crossing the breaches in the Separation Fence – to work or look for work inside Israel. They have been crossing through the large breach in the fence opposite the town of Umm Al Fahm for months now. The general scene is of neglect, ugliness and filth, man-made garbage is scattered everywhere, people look tired even in the morning. Most of them are young.

From there we proceeded to Tayibe-Roumana Checkpoint (at the eastern foothills of Umm Al Fahm), after a long break we took because of the increase in violence inside the town. Just before the steep descent to the checkpoint, a temporary barrier has appeared, made of a wooden rod, leaning on two posts and locked. We could not get down to the checkpoint, and so too the tractors coming up from the checkpoint cannot continue through here. In the not-so-distant past there were rumors that youngsters from the town collect ‘passage fees’ here from the people crossing the breaches in the fence, but we could not actually confirm this. Anyway, something really bad is definitely happening there.

Anin Checkpoint is locked, several tractors have been waiting on the village side since 6:30. A farming family (father, mother and their teenage son) with equipment for their olive harvest crossed the large breach in the Fence right next to the checkpoint gate, and went over to their trees. The Border Patrolmen finally arrived at 7:15, moved blocking posts and enabled the tractors to cross. The occupation clock-hands move slowly. Very slowly.

On our way to Dotan-Ya’abad Checkpoint we turned and took the new sandstone track that Ruti and Marina had discovered, a private track prepared by the settler-colonists of Oz Tzvi in the middle of a local Palestinian farmer’s olive grove. The way is blocked with a yellow metal arm and locked with a Yale lock. A woman and two children passed there in their car, with their Yale key, on their way to school in Harish City.

At the Ya’abad-Dotan Checkpoint, the occupation flows easily. Soldiers were seen inside the Pillbox tower.

We returned through eastern Barta’a first, then western Barta’a, visiting an old friend at his workplace. Full work weeks are no longer an option, hardly three-days’ worth… Even in the sewing shops that used to provide much work for West Bank women. 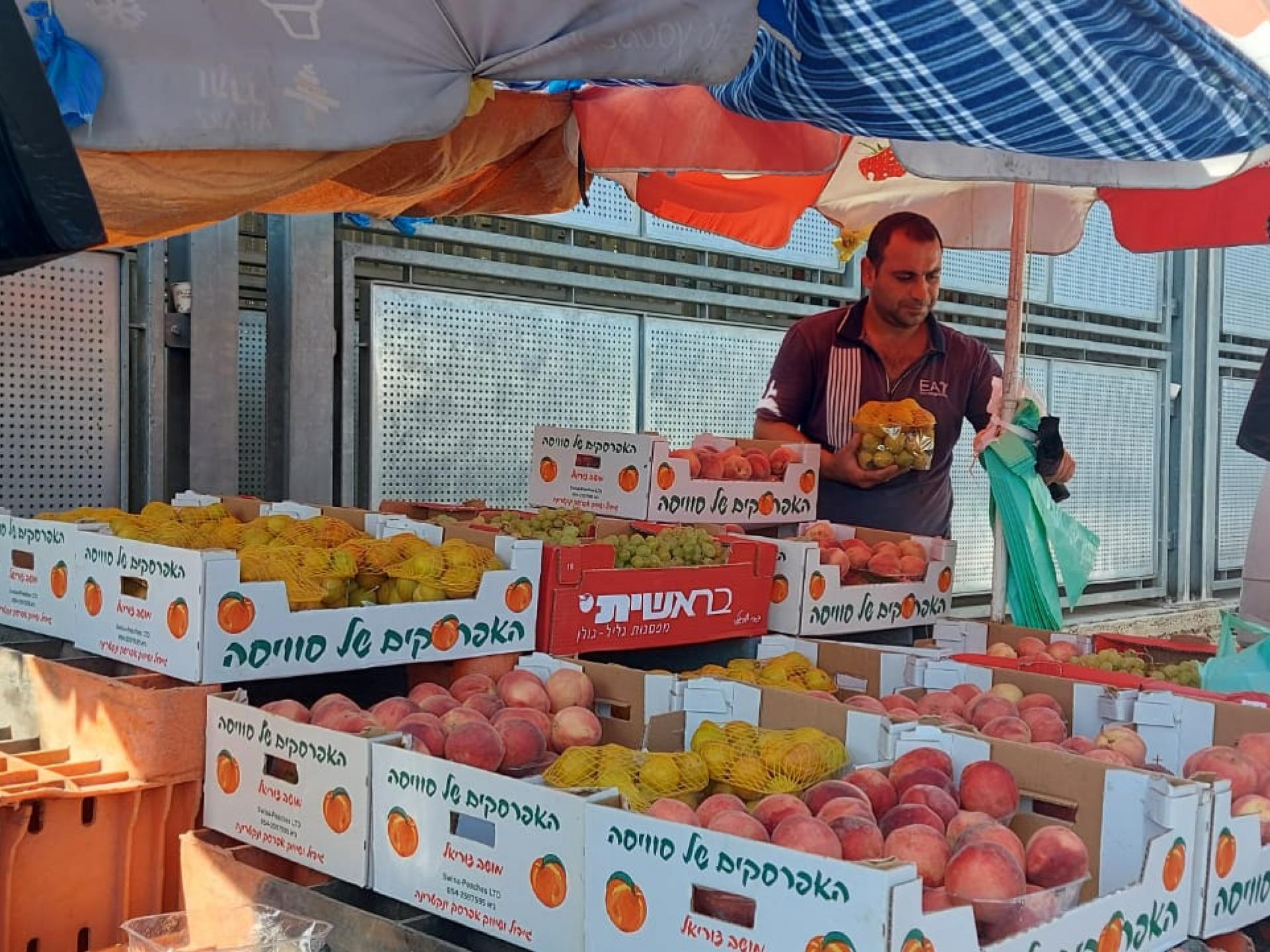 Summer fruits at the Barta checkpoint