An exercise in walls, barriers and annexation

This time we visited the twilight zone that lies between Jerusalem’s Ramot neighborhood and the settler-colony Giv’at Ze’ev. There are 3 Palestinian enclaves there, whose inhabitants must drive to the distant Qalandiya Checkpoint to access Israeli areas located right opposite them. These are people with work permits or holders of Israeli IDs. Insane. Since it is extremely difficult to figure out what happens here, I’ve attached a map. We finished our shift at the Bituniya goods checkpoint, and the Har Adar checkpoint.

We started from Nabi Samauil, the little village near the tomb of the Prophet Samuel, namely Nabi Samauil. It is caged in a seam zone inside Israel, located in the heart of the Samuel Mountain nature reserve. Any planting, cultivating, or construction is strictly forbidden. Villagers holding a Palestinian ID need a permit to live in their own home, and a specific permit to leave it for Israel. They are also disconnected from the West bank – the Wall separates them from the enclave of Bir Naballah in the west, and from the nearby villages of Beit Iksa, Bidou, Qatana and others in the east. See background.

We arrived at the school, which resides in several small mobile homes (offering a PA curriculum), during their morning rituals that include singing and exercise. The principal talks about difficulties, especially for a teacher who lives in nearby Beit Iksa and has to go to Qalandiya Checkpoint and then make a 360-degree detour to Ramot and Nabi Samauil. Her official trajectory is shown in the map below. Another possibility is to discreetly cross the wadi from Beit Iksa on foot to Nebi Samauil, just opposite. All she is asking for is a permit to cross the checkpoint at Al Jib, which is only open to Palestinians working in Giv’at Ze’ev. She would drive to it via an underpass and avoid the huge detour. So far, this has not worked out. We promised to look into it when we get more information. (See photos attached).

Read here about the complex situation of isolated Beit Iksa.

We returned to Road 436 from Ramot to Giv’at Ze’ev and turned at the former access road that used to reach Bidou, and is now behind the wall. We took a picture of the closed Bidou Checkpoint. Under this road there is a lower road leading to the Bir Naballah enclave. (See the brown lines in the top map). This is the exit track to Qalandiya. There is also an inner checkpoint, regularly manned, between Beit Iksa and Bidou, allowing only Biet Iksa villagers through. If a guest arrives, the host must come to the checkpoint to identify him.

Beit Ijza Checkpoint – on the outskirts of the new Giv’on. Here, on the edge of the new settler-colony sitting on Palestinian-owned and declared ‘state land,’ we met two workers from Beit Ijza who were on their way home from a night shift in the tunnels of one of Jerusalem’s roads. They say that their village had always been peaceful and had many ties to Israelis and explained with a smile that making a 24-kilometer detour via Qalandiya Checkpoint to get to work in Israel is simply impossible for them. We could not understand how they continue to smile…

We continued to another closed agricultural checkpoint opposite the village of Beit Duku. The Giv’at Ze’ev expansion lies right opposite, called “the Deer Basin.” It too is located on confiscated “state land,” formerly Palestinian-owned and cultivated.

Back on Road 436, we reached the Bituniya goods checkpoint. There we heard an explanation about the operation of the checkpoint through which loaded trucks pass between Jerusalem and Ramallah. It is open every day from 8 a.m. to 4:30 p.m. and 150 trucks cross it daily, most of them delivering goods to Ramallah. The Value Added Tax is paid either to the Palestinian Authority or to Israel, according to the origin of the goods.

To complete this observation of the “surreal trails of the Jerusalem area inhabitants,” we decided to visit the Har Adar Checkpoint. It lies right beyond the Palestinian village of Bidou. All workers crossing it are from the caged villages we have viewed from afar. It is unbelievable, but this peaceful and rich settler-colony is accessed daily by 1,500 Palestinian workers! Only they are allowed through the checkpoint. To approach it we had to get to the Jerusalem-Tel Aviv highway (Road no. 1), exit at Abu Ghosh, and climb up through Kibbutz Kiryat Anavim. The checkpoint was closed at this hour. It is opened briefly in the morning to absorb the workers, and in the afternoon, to let them return to the nearby villages.

These trails are apparently a pilot for the kind of state we are to expect if Area C is annexed – a state of apartheid roads, fences, walls, and farmland stolen from Palestinian farmers, appropriated “state land” annexed to expanded settler-colonies. An evil, ugly apartheid state.

Ijza checkpoint: going home from work in Israel through an opening in the “separation fence”

Workers returning from a night shift in Israel through an opening in the fence at Ijza checkpoint, which is closed to traffic. The village is located in the Bidou enclave – 7 villages disconnected from their natural vicinity in the West bank

Morning ceremonies at the Nabi Samauil school, a blocked village in the North Jerusalem seam zone

Morning ceremonies at the Nabi Samauil school, placed in several small mobile homes. This Palestinian village is disconnected from the West bank and caged inside a seam zone, in the heart of the Samuel Mountain nature reserve. One of the teachers living close by has to make a huge detour (360 degrees) in order to get to the school. 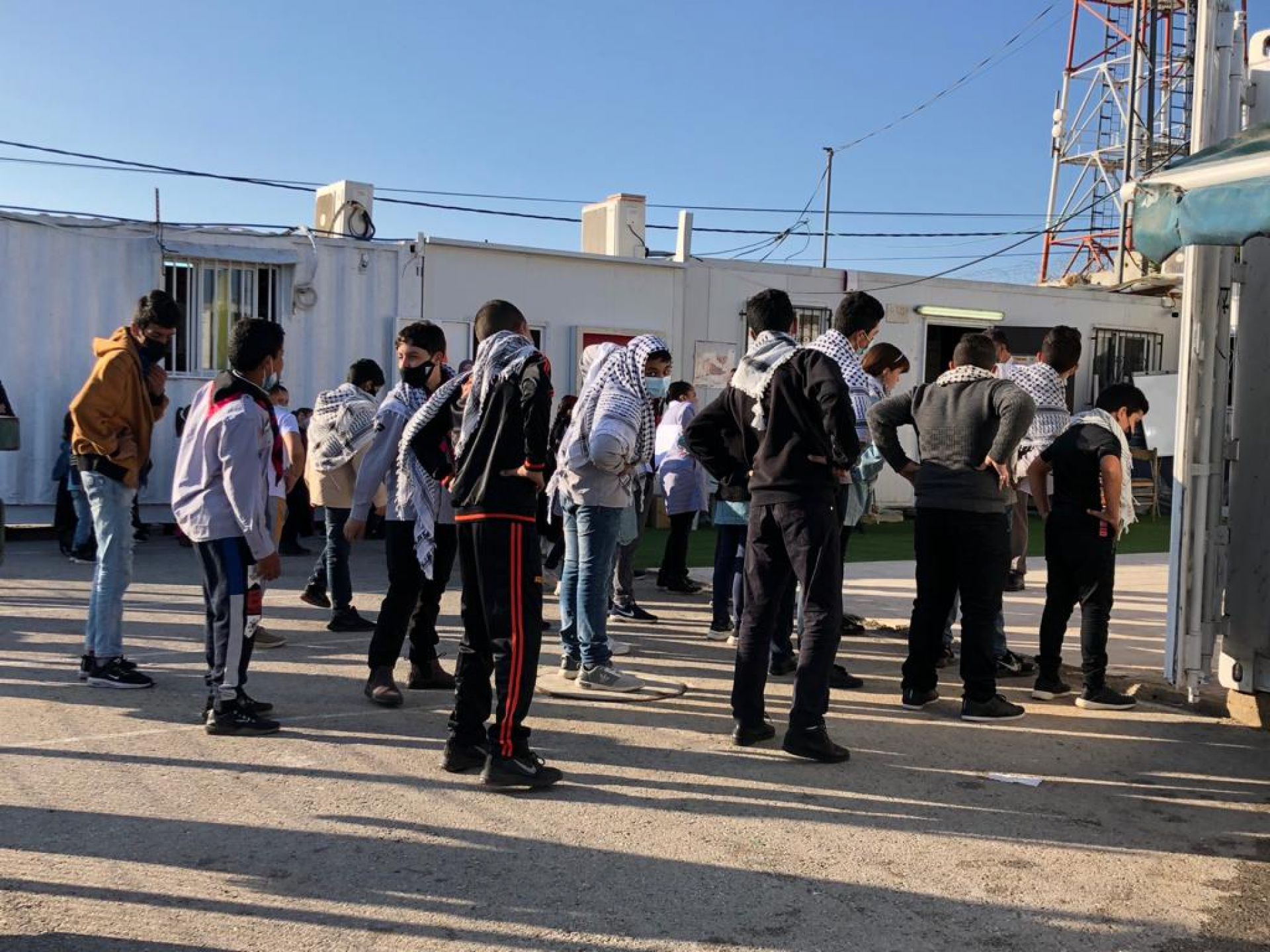 Morning roll at the school in Nabi Samuel, a blocked village in the seam area in north Jerusalem

Morning parade at the school in Nabi Samuel, housed in a number of small caravans. The Palestinian village detached from the West Bank and imprisoned in a seam area, in the heart of the Har Shmuel Nature Reserve (Israel). One of the teachers living nearby has to make a distant and huge detour (360 degrees) to get to the school. 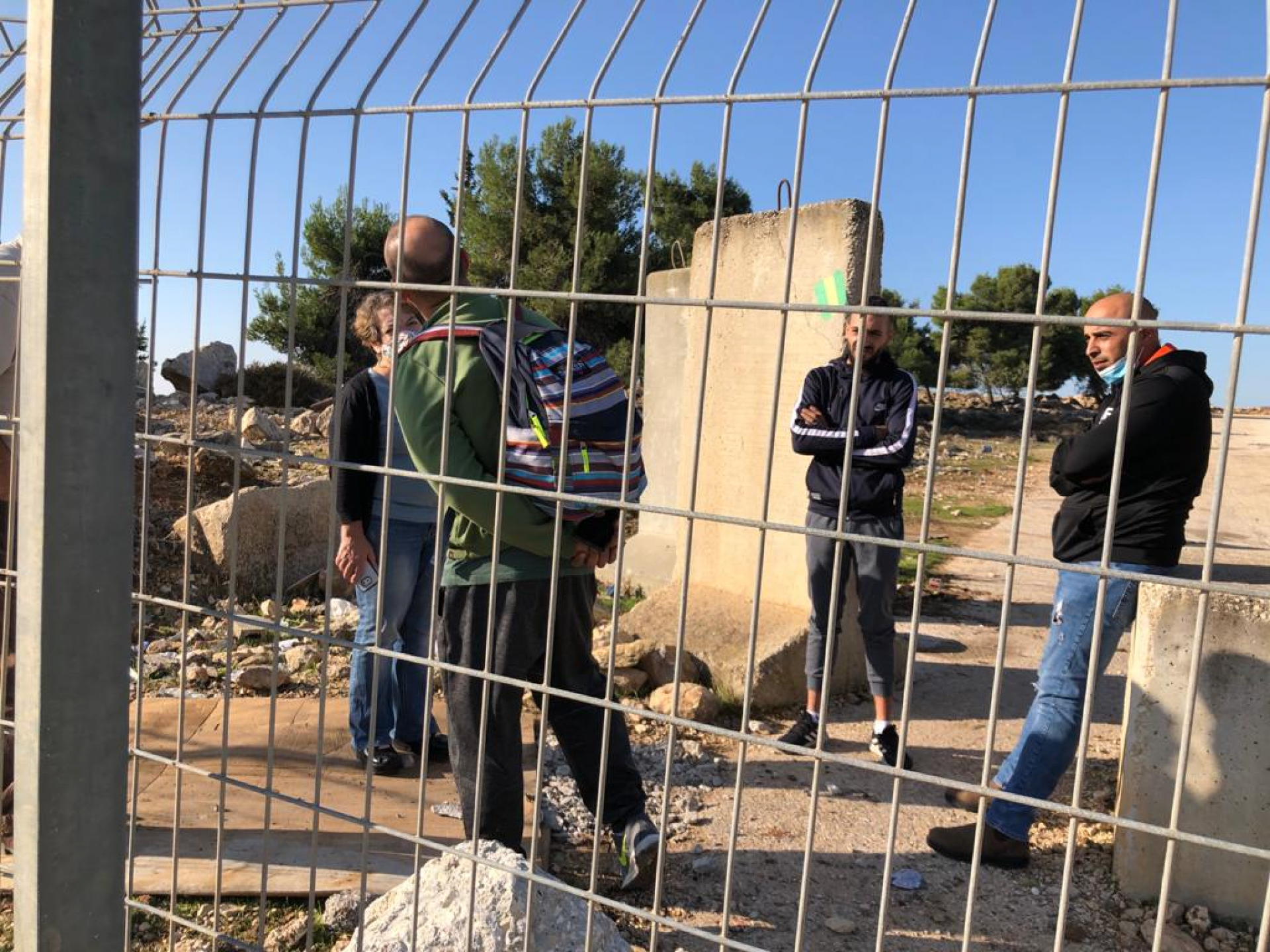 Ijza checkpoint: returning home from work in Israel through a breach in the "border" fence

Workers returning from night work in Israel through a breach in the fence at the Ijaza checkpoint, which was closed to traffic. The village is located in an enclave Bidu of 7 villages that have been cut off from their natural environment in the West Bank

Beit Ijaza checkpoint - the outskirts of the new Givon: The checkpoint placed on the separation barrier consists of several high gates

and fences that surround a Palestinian house cage from the village of Beit Ijaza, which the separation wall left in the area of the new Givon settlement. The settlement did not give up any space around the trapped house. The residents of the house are Palestinians and their entire lives have remained beyond the fence. They can move to Beit Ijaza only with special permits.