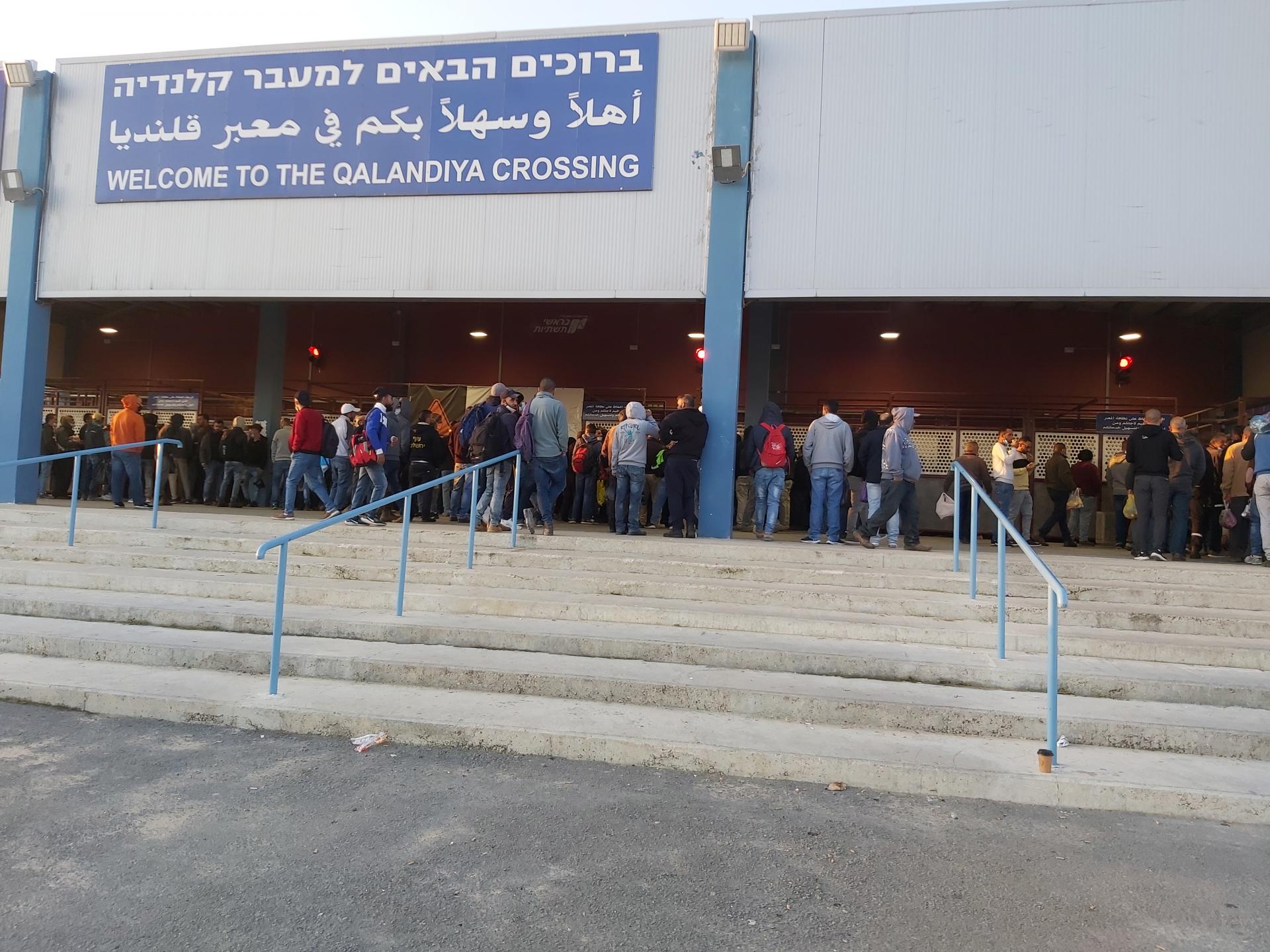 Queues at the checkpoint 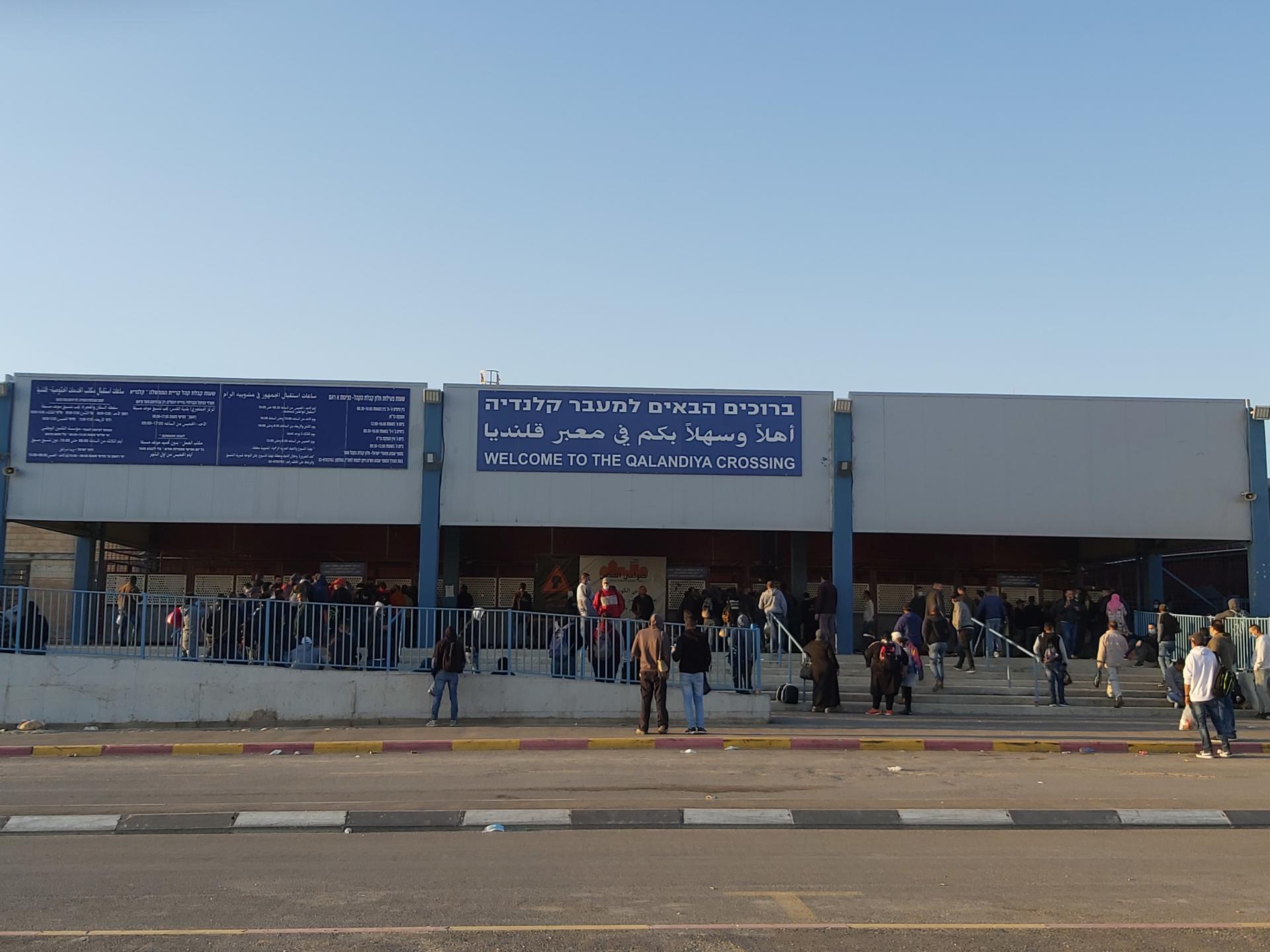 Queues and chaos at the Qalandiya checkpoint again 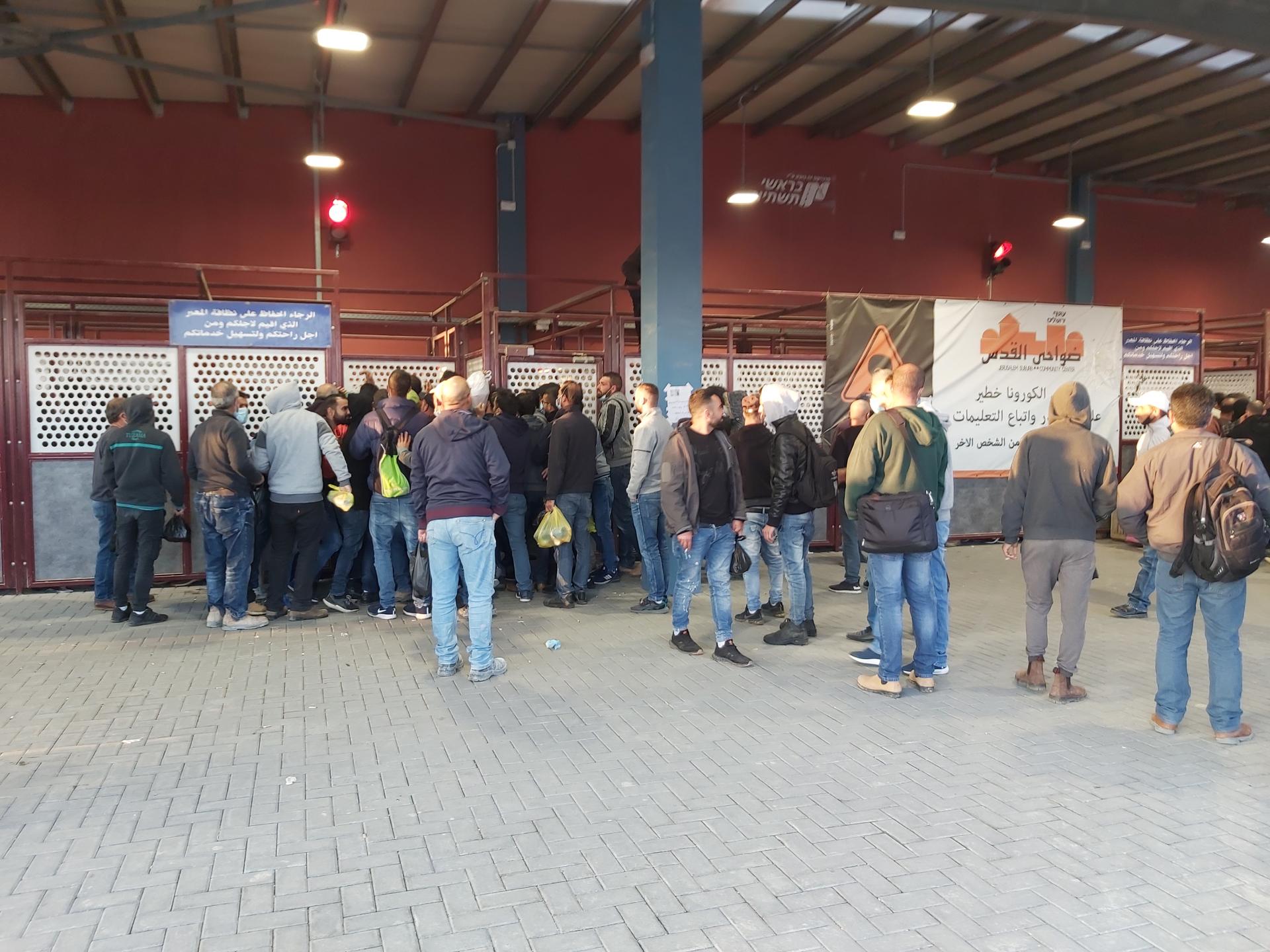 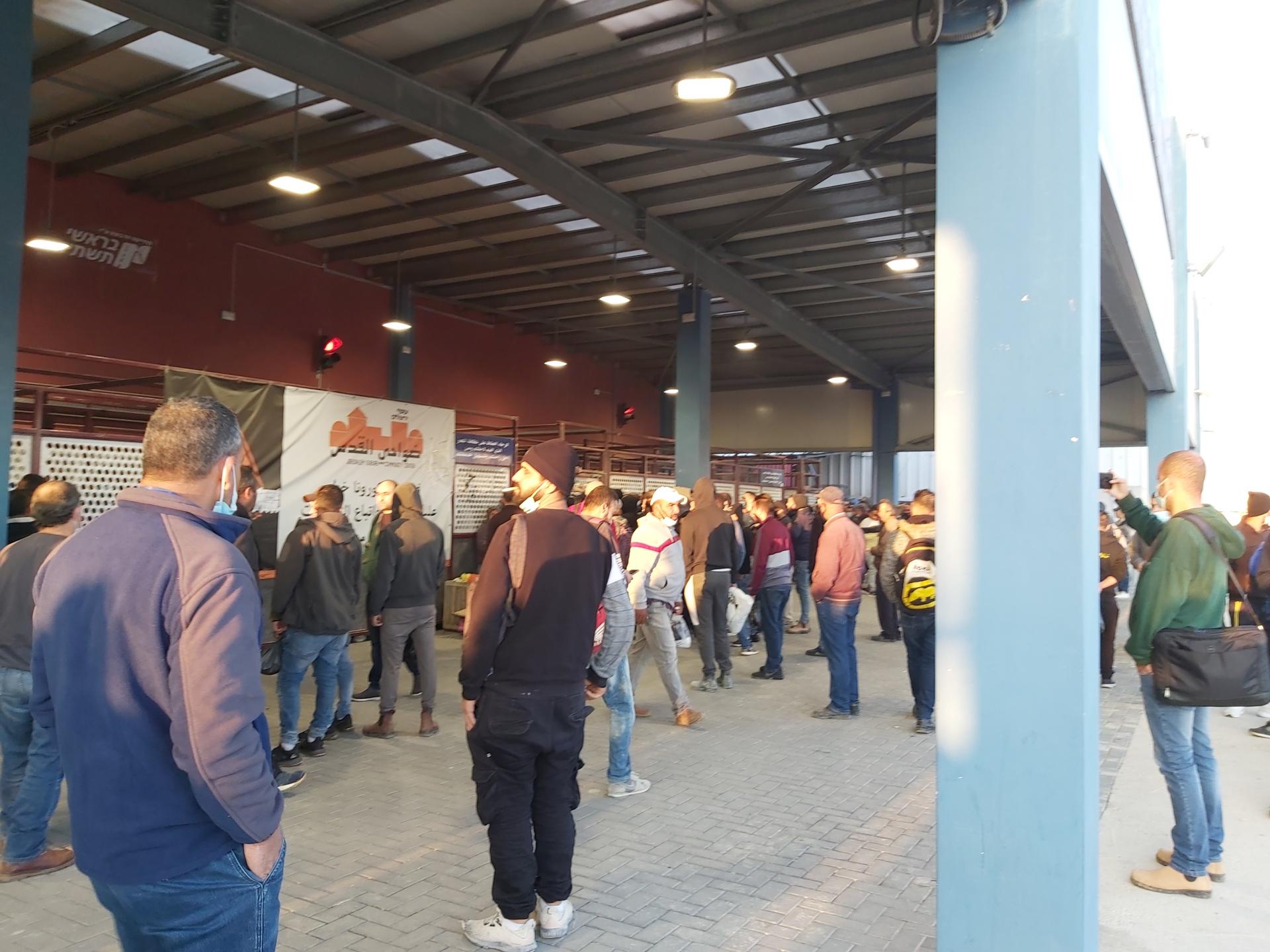 Youngsters climb fences to get around collapsed queue 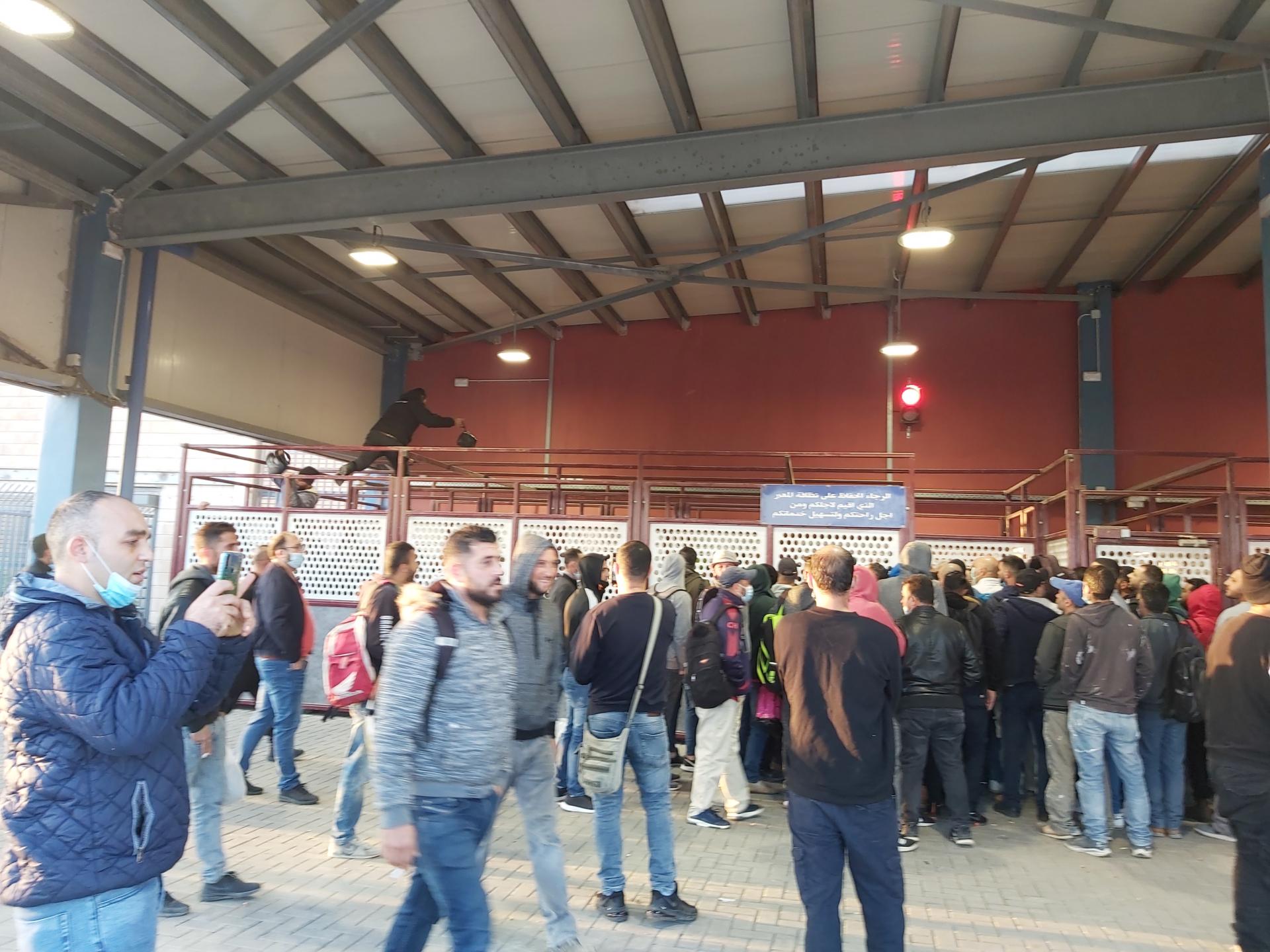 Stepping back afraid of being crushed. Some take photos 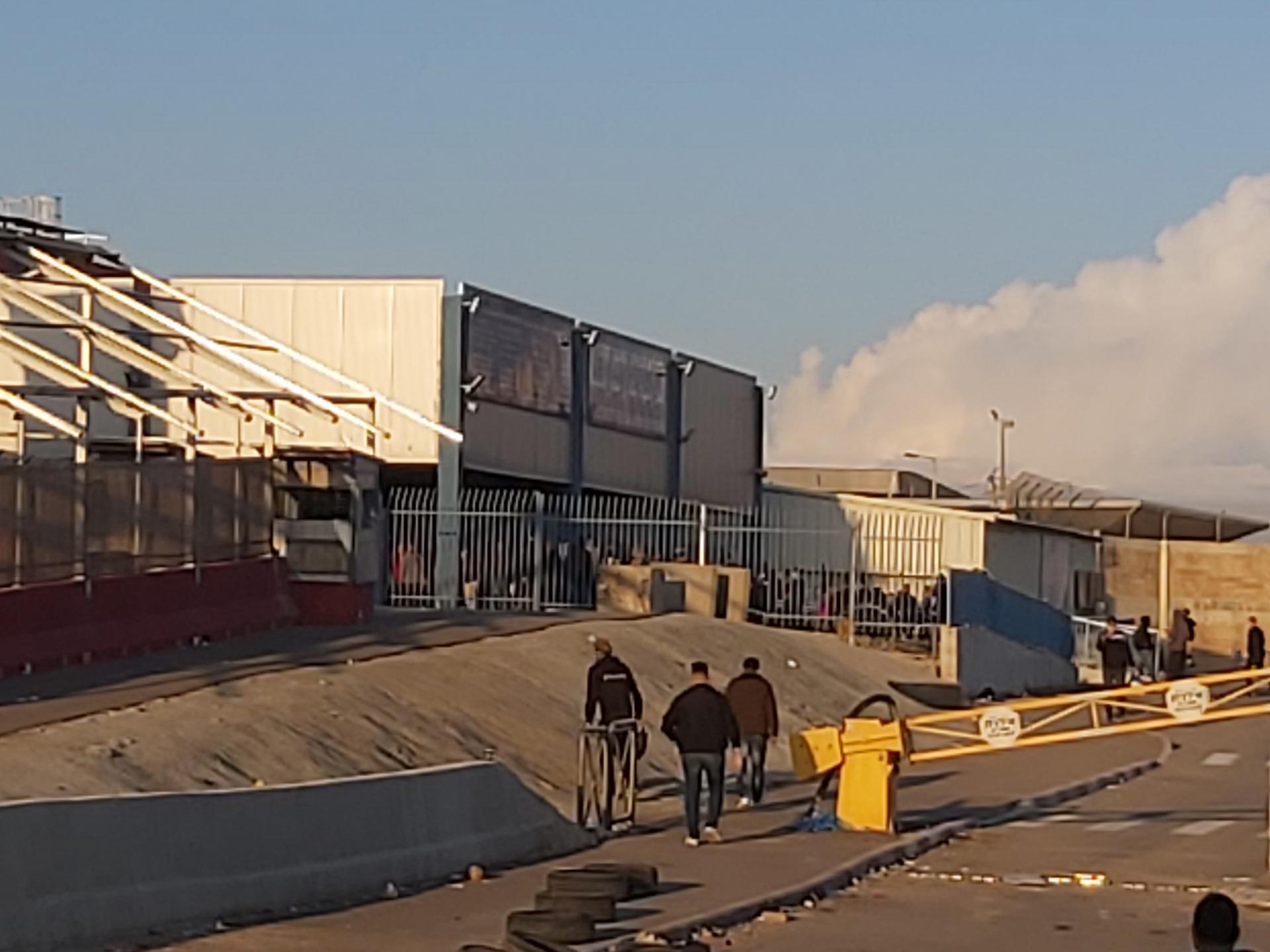 View from the kiosk to the checkpoint and the queues 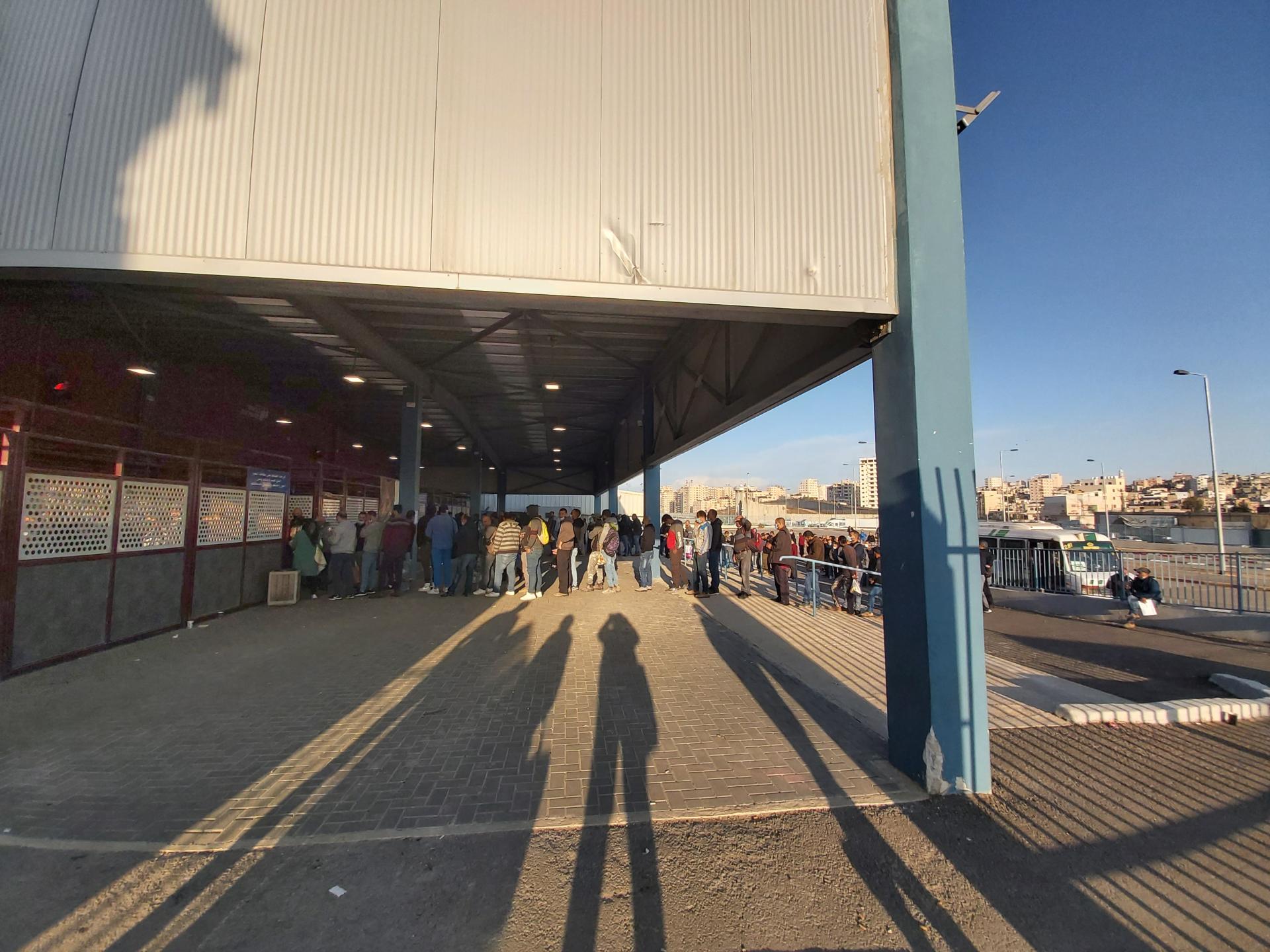 Queues are arranged again, but getting longer 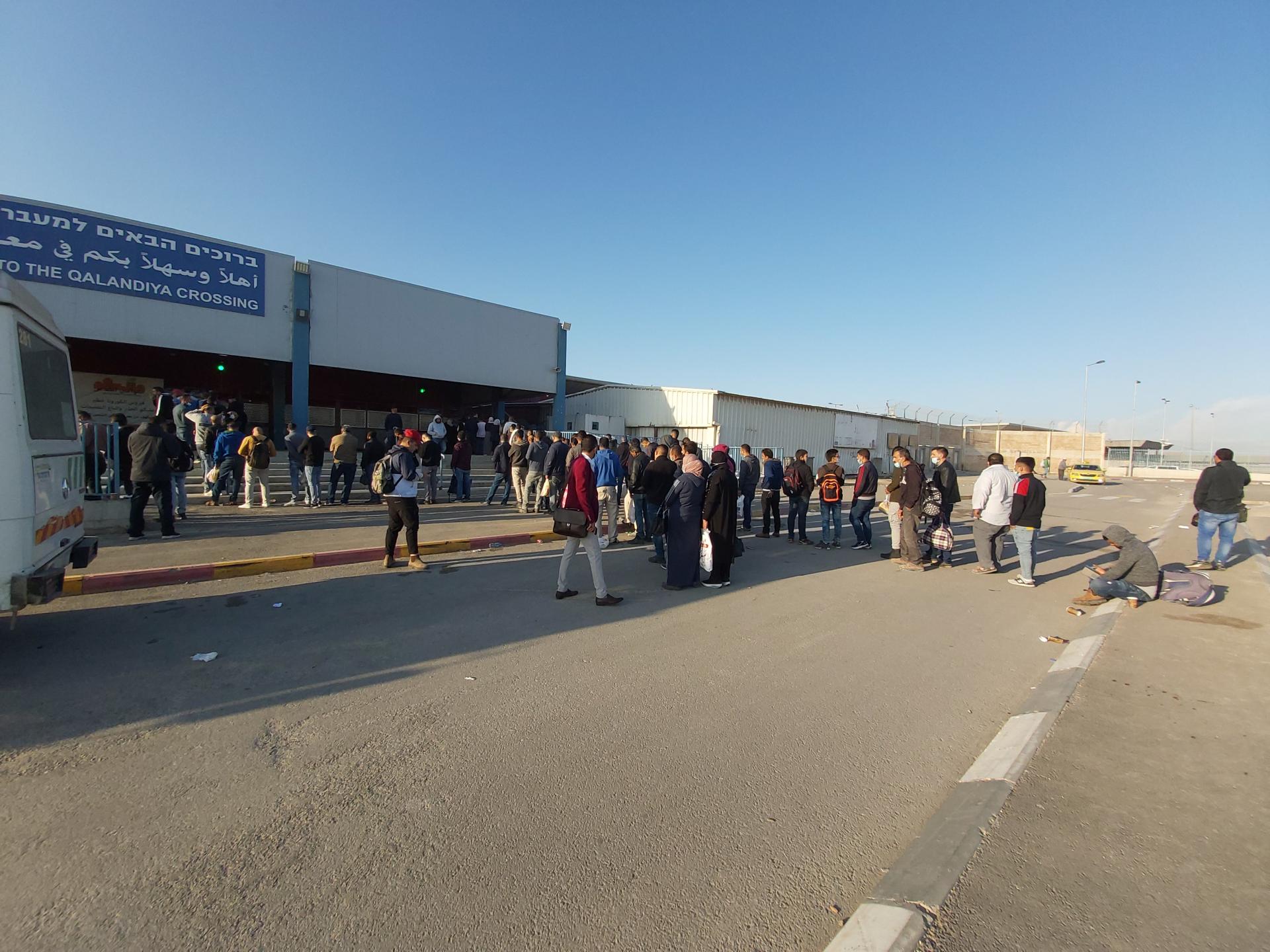 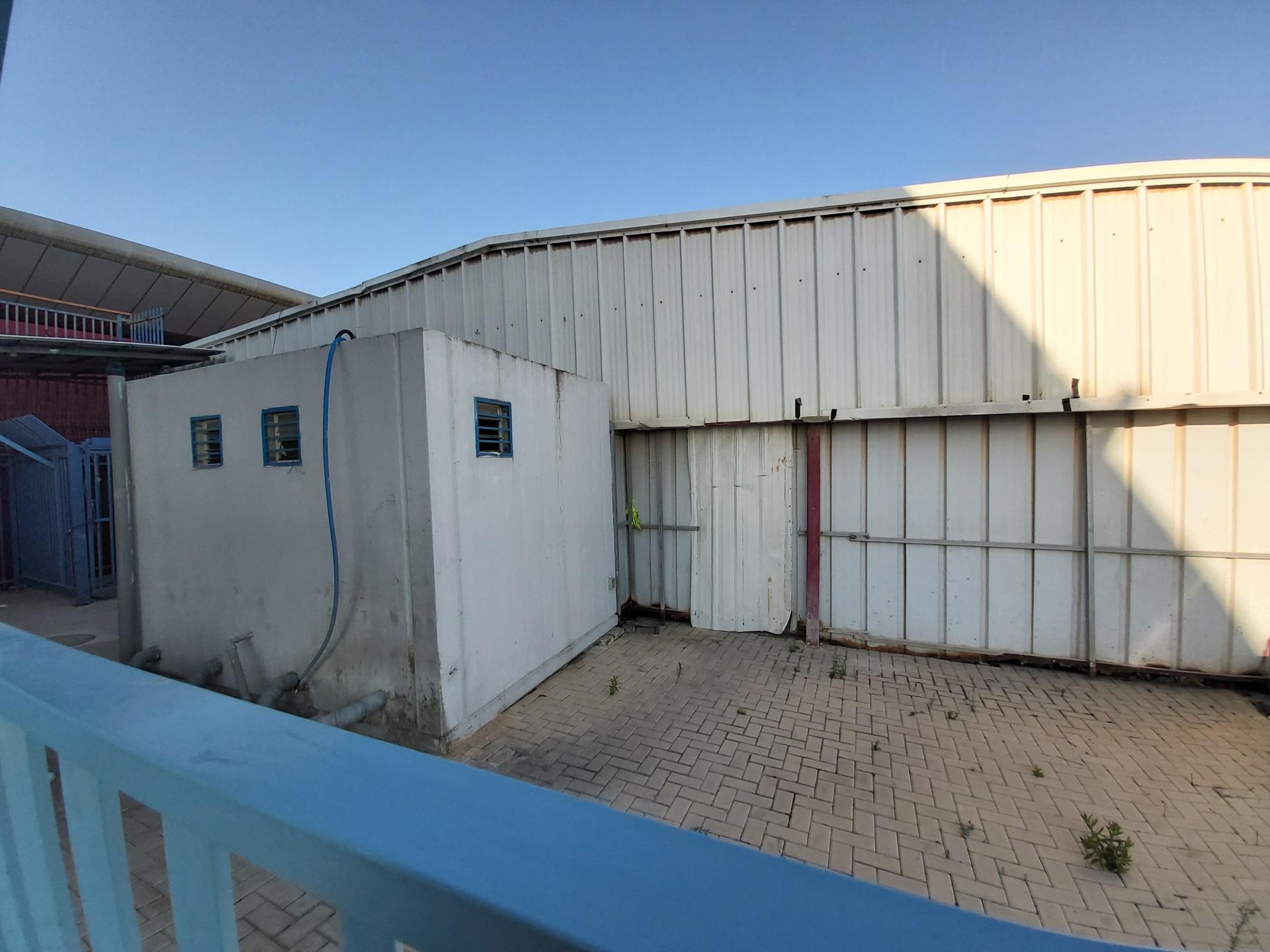 Blocked entrance to the toilets via the old building 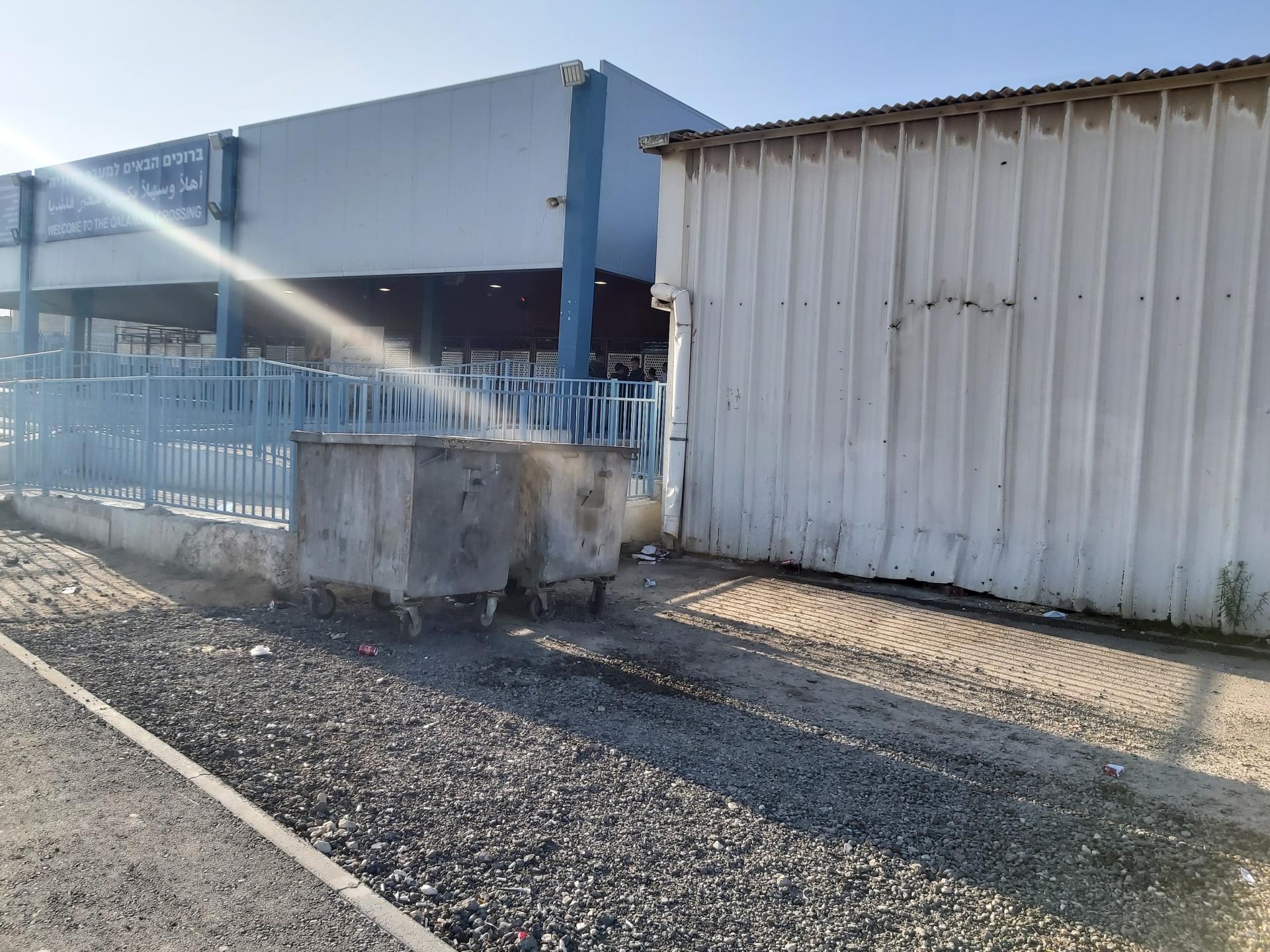 Bins are empty and area is clean 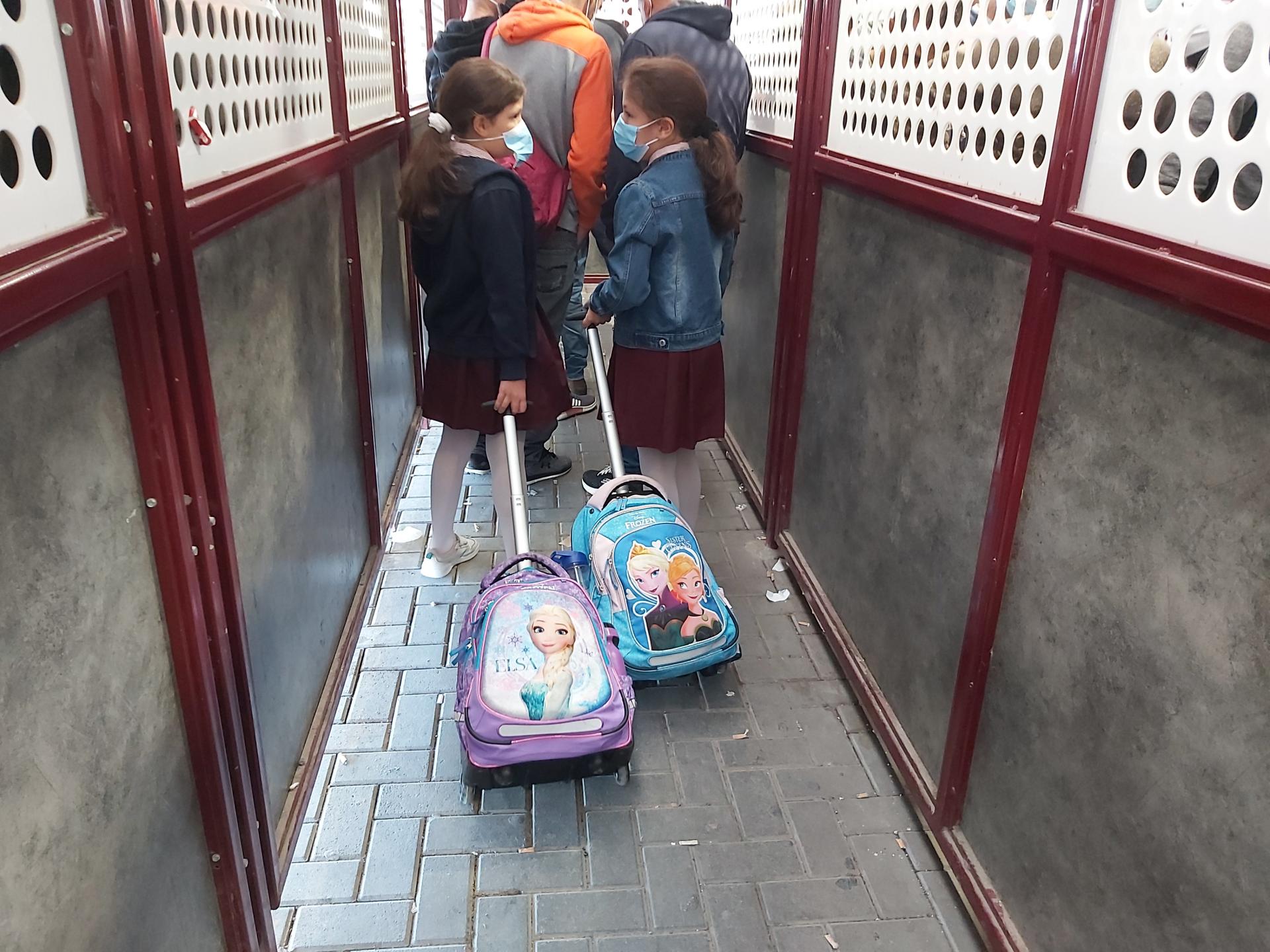 schoolgirls waiting in the passage

We returned to Qalandiya after a 2-month break – one month when we were in lockdown during the Holy Days but the Palestinians were not … Now that the clocks have been put back it was already light when we arrived at 6.15 and the place was buzzing. We made our way across the long tiring pedestrian bridge to the Palestinian side. The Palestinians do not seem to believe in masks. When inside the checkpoint building they have to wear them but hardly do so outside.  On the bridge, almost no one wore a mask.

As we passed through the turnstiles after the bridge to reach the Palestinian side, at about 6.20, the fog caused by our masks and the dazzling sunrise make it difficult to see.  But our ears catch an ominous noise – reminding us of the bad days of the old checkpoint.  And, indeed, we are faced with 3 queues at the entrances to the building.
The shed is full, we hear shout and quarrels from inside the passages leading to the checking stations themselves (especially from the leftmost one). And when the entrance opens and the lines begin to move, once again we see 'heaps of people' as in the old days. People bang on the metal sides of the passages, and young folk climb up the barriers to get into the queues from above.

Our friend Abu Ramzi stands selling his beigels and hard-boiled eggs in the parking lot.  When he sees us approach he pulls up his mask to cover his nose. He and passers-by tell us that the conditions have been like this for some days.  He himself is about to have a cataract operation which will cost 2,200 shekels.  We promised to try to help.

At the tea kiosk we were greeted by Muhammed who recommended his tea, especially good today because he has added a new fresh herb "a brother of hyssop (zaatar)", which he offered us also to take home.   We went off to drink our tea at a safe distance, from which we could see that the lines were still very long.

As we approached the building we chatted with people who said the situation had been like this all week. One man said that his hand had been hurt by the shoving and now he was waiting till the chaos would be over. Of course, conditions are particularly hard for women – not to speak of corona conditions. Meanwhile, the lines become more orderly, although still long, sometimes reaching the road serving public transport.

Usually, we leave at about 7. Today, as in the old days, we wait till the lines stop. Old people complain that, since the corona, they are not allowed to enter Israel. One man said that since March he has not earned a shekel. There is no work on the West Bank, and no help from the authorities.

We went to explore: the entry to the section that had been open to the old checkpoint  (that is, to the toilets) has been blocked. The large garbage bins outside are empty and their surroundings are relatively clean

At about 7.40, when the lines were all inside the passages, we joined one.  In front of us were two little girls on their way to school. We waited 15 minutes in this section. When we passed the first turnstile and reached the first waiting hall we discovered the reason for the delay.  There are 6 checking stations, 2 for each entrance.  They are controlled by turnstiles allowing 5 people at a time for checking. But only 3 out of the 6 were working. People coming from the right entrance joined the righthand line in the middle. On the left one station was working, which people from the left entrance joined. And we joined the line for the left station in the middle. We noticed that the little girls were not with us. Apparently, they had turned right, didn't know where to go, and were pushed back. We called them to join us. They hesitated but then people ahead of us told them to come to their old place in line. And when they did come the adults in line let the girls be the first to pass at the next opening of the turnstile.

We crossed the checking machine in a few minutes to reach the hall with electronic identity checking machines and 3 stations for manual checking. Palestinians place their magnetic cards on a machine like a Ravkav card on entry to a railway. But here there is also a camera

that identifies the face and then the barrier opens. There are altogether 20-30 electronic machines. On a normal morning, there is no bottleneck and many people pass swiftly. Today only part of these electronic stations were operating between 2 manned stations in one of which was a male soldier and in the other a woman soldier, checking identity cards. We passed without delay. Altogether it took us 20 minutes to pass, at a time when there were no lines.

After we passed we saw a policeman (or maybe a security guard). He was very polite and explained that the delays were caused by shortage of soldiers because of quarantine. Usually there are 2 soldiers in each checking post one of whom checks documents and the other watches the electronic stations to see that no one jumps over, or something similar. Today there are only 2 soldiers, so that also fewer baggage checking stations were operating. And that is what was causing the delays. He said that earlier in the morning doors next to the turnstiles were opened to allow in women, children and others in a bypass line (as in the Humanitarian Line of old). He said there is a supervisor standing above (there is a 'gallery' above) who tells them when to open and whom to allow through. We did not see this, but it could well be, but we did not get close at a time of pressure. The soldier in checking documents waved us through on our way towards Jerusalem.