Meeting with the activists of Jabal Mukaber's struggle 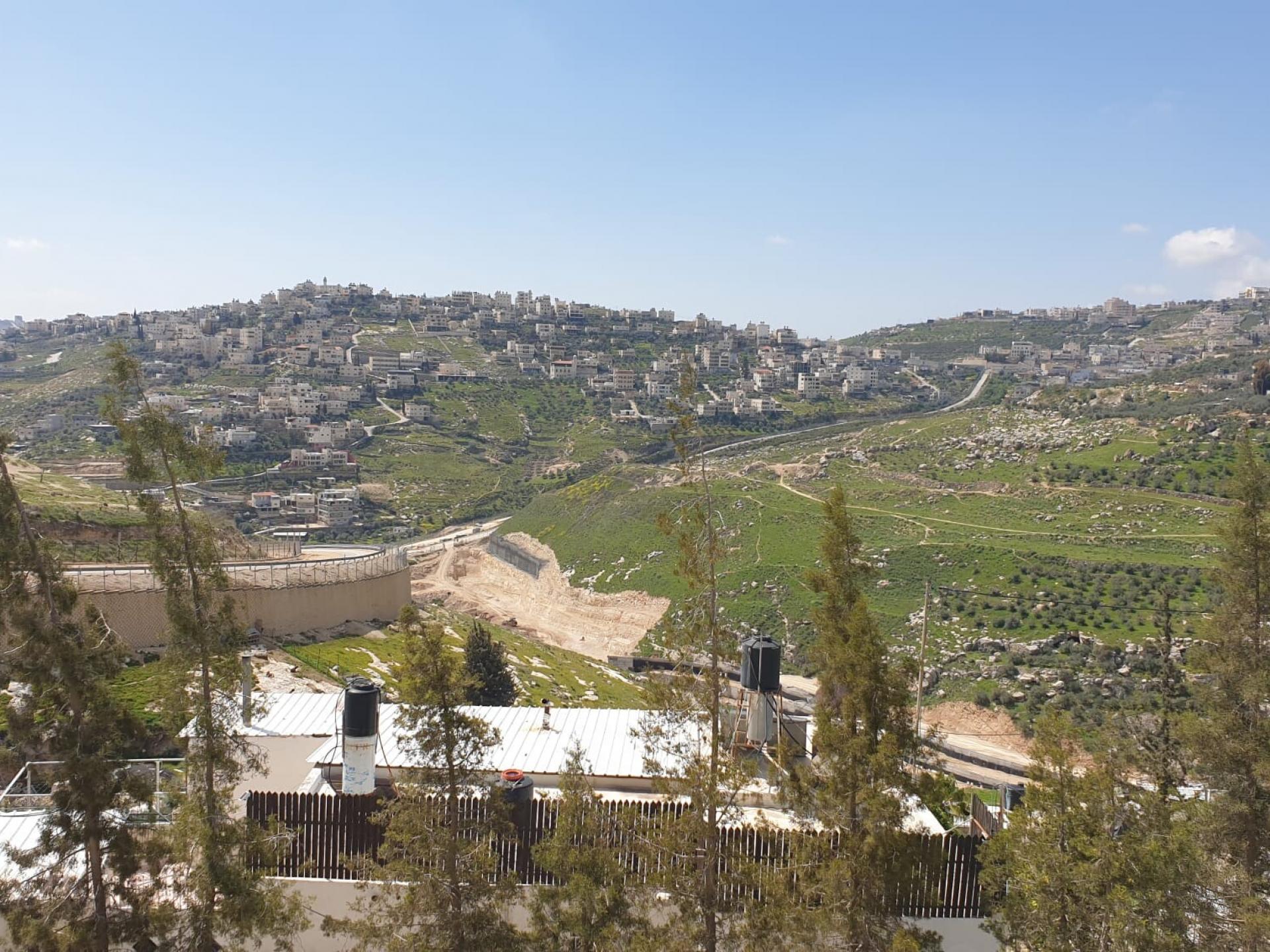 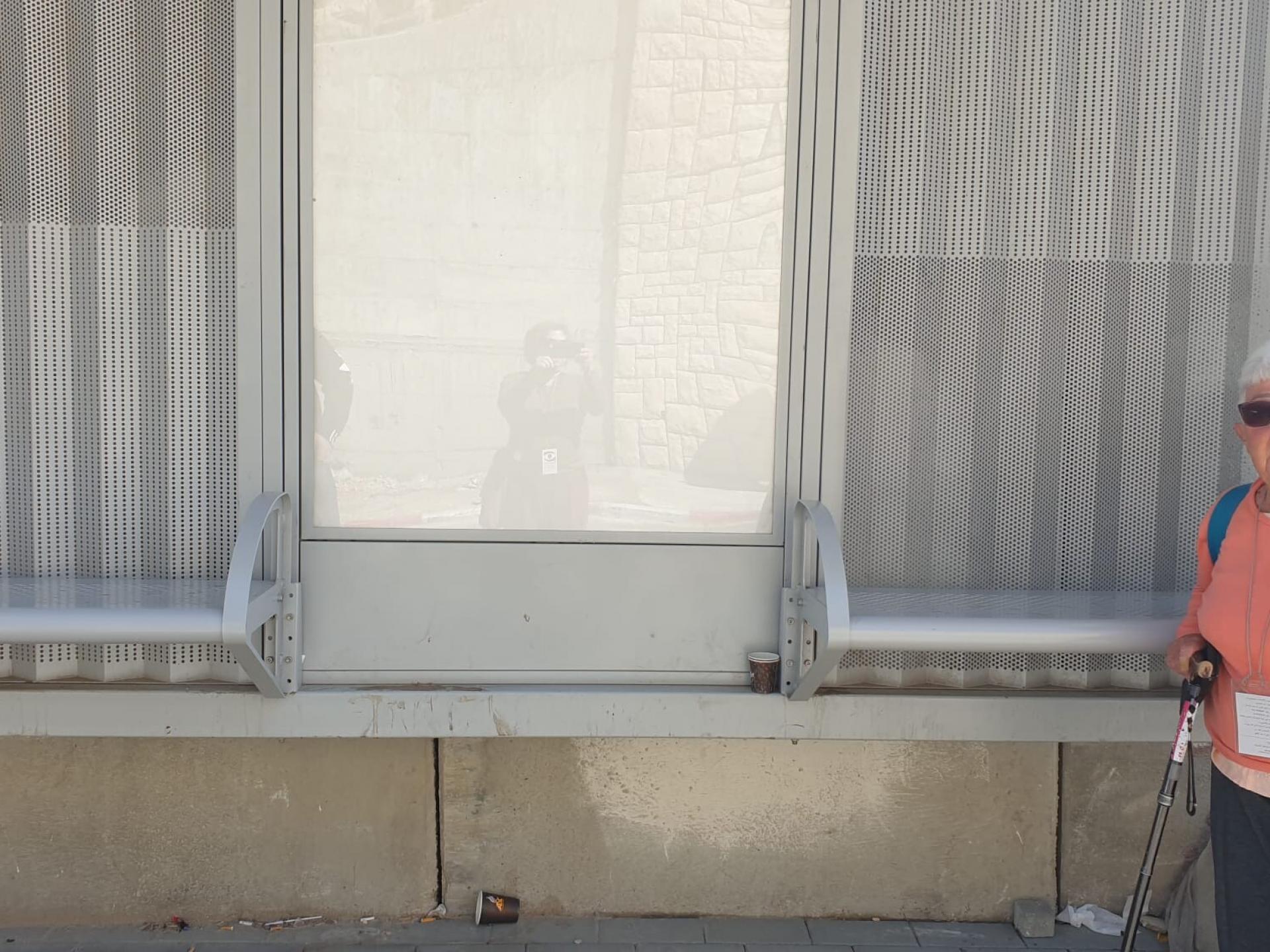 Bench for Giants on the American Road . 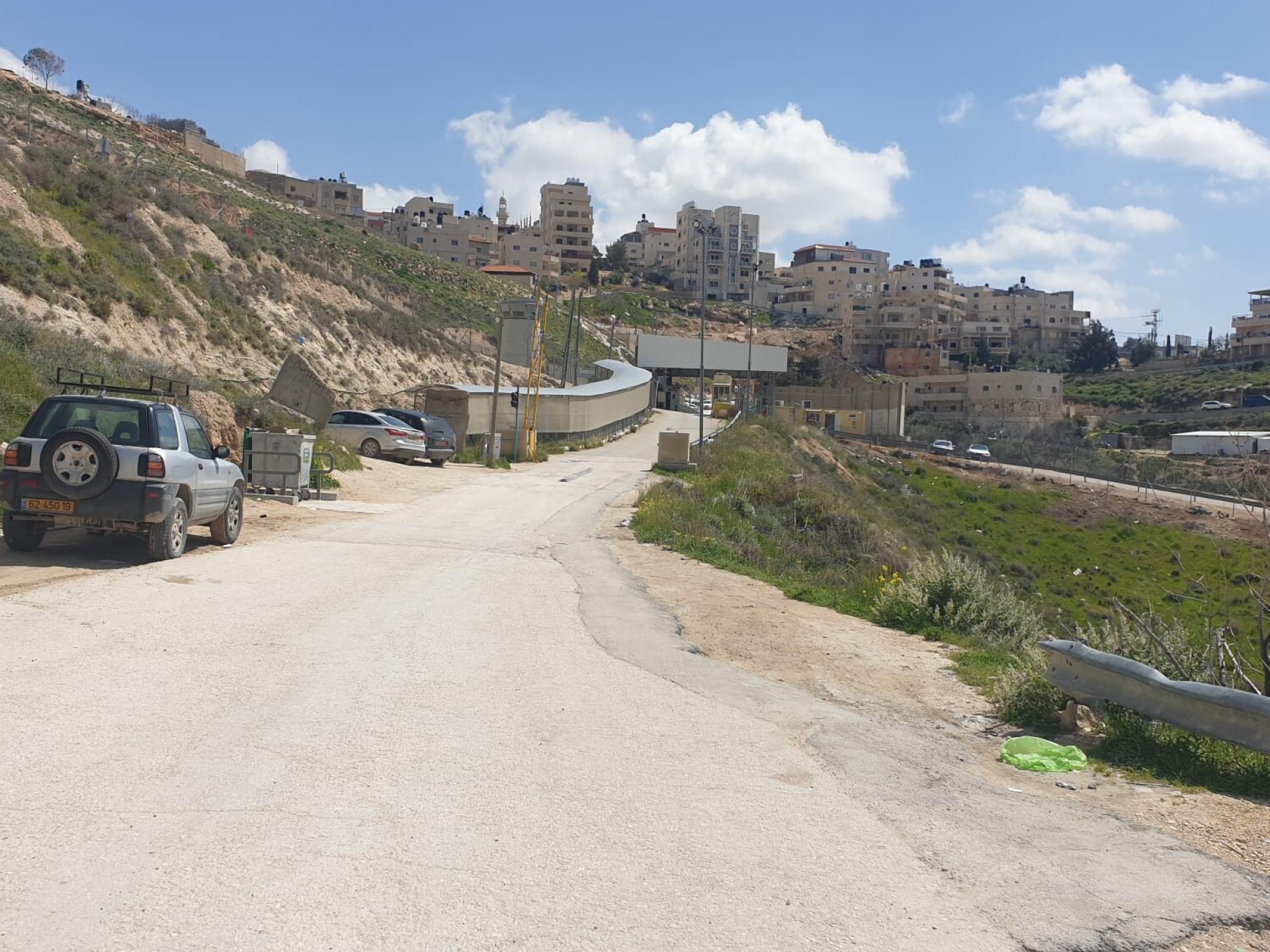 We came to interview Nabil B. and Raed, leaders of the Jabel Mukaber residents’ struggle against the new master plan for Sawahira. We drove to the neighborhood car-crossing of Sawahira a-Sharqiya which is limited to  only  registered 1,300 cars.

In the 1960s, during Jordanian rule, an American-funded road was constructed in the foothills of the Jabal Mukaber neighborhood and above the deep wadi of the Kidron stream, to connect southern Jerusalem and the a-Swahira area with Wadi Qadum, the Mount of Olives and the Old City. The road was not completed until 1967, and since then and until 2021 the narrow and winding American road has not been widened.  Only a few repairs to bumps and potholes have sometimes been made on it.

The growing housing shortage in the Jabal Mukaber neighborhood and the withholding of building permits pushed residents to build on land on the side of the road. They tried to get permits but most of them failed.

In 2021, after a 20-year delay, a limited plan was submitted that deals only with the main section of the American road, which was declared a major urban road on which to build . However, only 20% was allocated for housing. The final design is 32 meters wide with a light-rail track in its center. Today, the plan includes dozens of buildings slated for demolition, some of which received de facto approval years ago. By the way, the route of the road sits on the steep slope of the Kidron stream, and its paving requires the construction of a ledge on which the road will be laid and supported by retaining walls of 15 meters and more.

In 2021, the municipality made a huge investment and began to expand the main part of the American road widening it to 16 meters. Sidewalks, bus stops and stone fences were also installed. Then suddenly all the demolition orders went into immediate effect, even those related to the demolition in the next stages of expansion and construction that are not currently on the table.

Dozens of objections to the plan were rejected, as was the request to freeze the demolition of the houses until the next stages of the plan were advanced to the area. In February 2022, the residents of Jabal Mukaber began to demonstrate in front of the Jerusalem Municipality. Meanwhile, the demolitions were frozen only for the period of Ramadan 2022.

We traveled with the activists along the 3 kilometers, on some of which the road had already been widened to 16 meters. They showed us the houses slated for demolition on the edges of the slope. Every day, they say, more and more demolition orders arrive that take effect immediately. We videotaped them telling us that everything belongs to one big plan that connects the settlements south of Jerusalem with north Jerusalem and the road to Ma'ale Adumim.

The plan will also include bridges and a tunnel under the Mount of Olives. We promised to follow what was happening, spread the protest of Jabal Mukaber’s residents in our networks, and try to join forces with the "Bimkom" an organization for planning rights, and with other organizations such as Peace Now and Ir Amim, in order to offer as much support as possible.

On the narrow, winding road that ascends the eastern ridge above Wadi Kidron (termed Wadi Nar by the Palestinians), we noticed heavy equipment at the bottom of the wadi, above which runs the central part of the American road. We were told that these are drainage and sewage works, carried out by the Dead Sea Authority. And yet, we remained suspicious. Maybe it's related? Every construction plan includes drainage and sewage infrastructure, and this location is suspect.

With apprehension we approached the fortified checkpoint, through which runs the Security Road from Sheikh Sa'ad, continuing up the ridge to Abu Dis. On this excellent road, crossing over hills and mountains, only a reconnaissance jeep travels a couple of times a day. It could have been the dream road for the South Jerusalem residents instead of their gridlocked road to the Old City and North Jerusalem. Maybe one day …

Netanya, who had never been here, marched in shock down the long corridor leading to the checkpoint, which ended with fences and metal gates

from all directions. We managed to enter the concrete pavilion of the checkpoint and talk to a kind female soldier, who came out from behind the armored glass, where she waited for the end of her monotonous shift - 8 hours. Two more years for discharge.

By order of the court, only 1,300 men and women are allowed to cross this checkpoint by the court's orders. We asked her how it is that we have seen so many female soldiers at checkpoints lately (for two years now). According to her, the checkpoint soldiers are now defined as "combatants." However, this is the only combat role for girls which they cannot refuse to serve if assigned. We told her about Machsom Watch and parted amicably.

On the way back we met a Palestinian, a young entrepreneur, from whom we learned that the only ones passing here are those whose homes were imprisoned behind the wall, while included in the municipal area of ​​Jerusalem. This is a narrow strip of 200-300 meters in our estimation. Anyone who lives 10 meters beyond the imaginary line - is a Palestinian with no right of way and must drive to the Olive Checkpoint, which is at least 30 minutes away.

At this point in the conversation, the checkpoint commander and his female assistant arrived. With appalling rudeness he waved his dismissive hand at the impressive young man we had spoken with. He informed us, under the admiring gaze of his assistant, that he was commanding us never to approach the checkpoint again as this is a closed security area. We tried to explain that a checkpoint is a public transit area. We decided that we must obtain a copy of the IDF spokesman's document which states that human rights organizations should be allowed to be present, observe and photograph at checkpoints.

A vehicle and pedestrian checkpoint on Jerusalem’s municipal boundary.

It sits on the separation fence, separating Sawahira a Sharqiya, Sawahira al Gharbiya from Jabel Mukkabar and the rest of East Jerusalem. The checkpoint is manned by Border Police soldiers and private security companies and operates 24 hours a day. Palestinians are forbidden to go through, other than residents of Sawahira al Gharbiya and residents of a-Sawahira a Sharqiya who have permits. Vehicles with special permits are allowed through, from Sheikh Sa’ed as well.