Qalandiya - again long queues at the entrance to the checkpoint 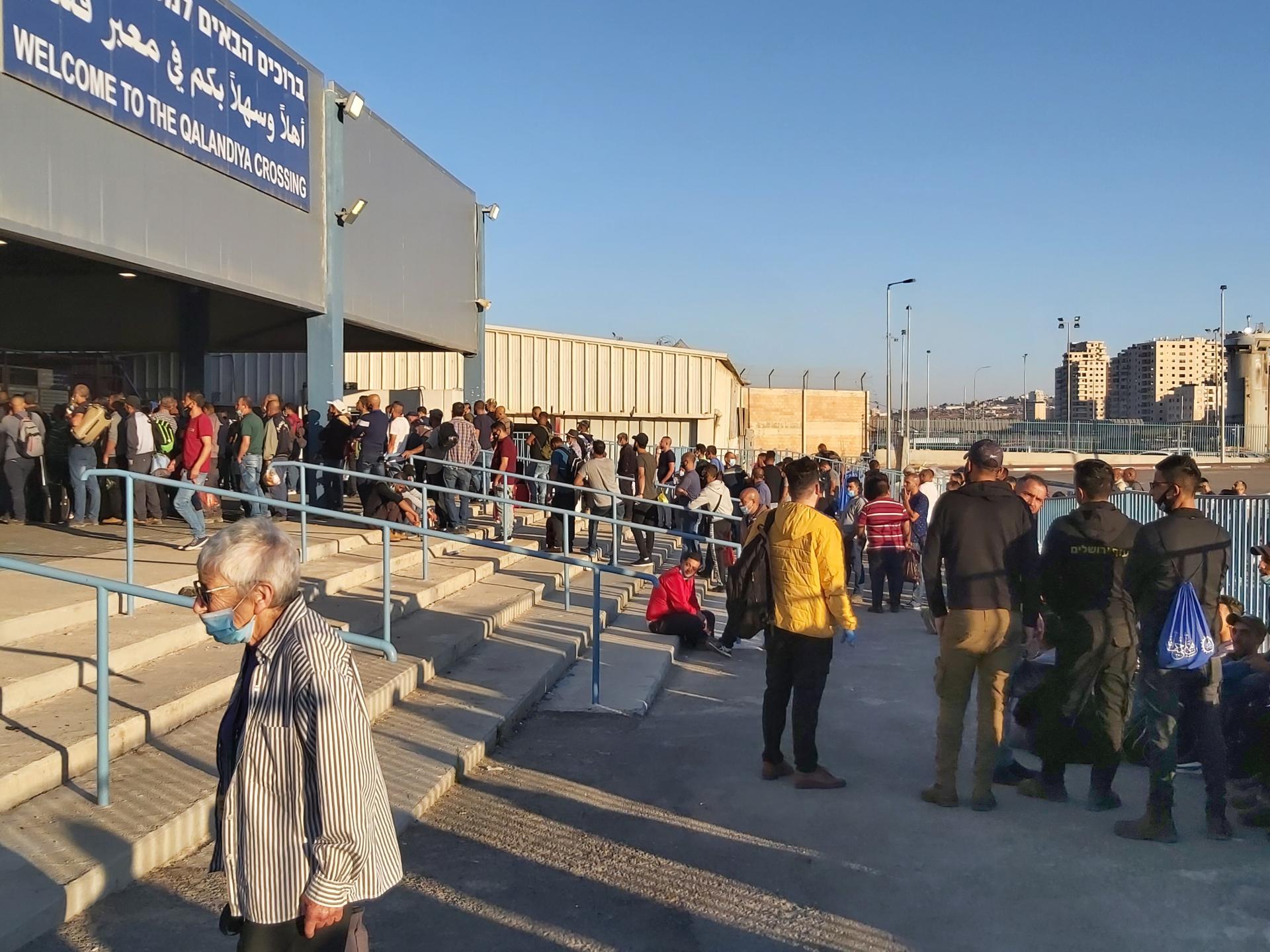 Very crowded underneath the shed near the 3 entrances

There is also bus parking. Top right – the line from the east, left yellow - kiosk

We put forward our visit this week because we had been told that after today workers would not be allowed to pass, except for those working in Atarot and medical teams. Because of the coronavirus and fears of infection, anyone entering Israel today would have to remain for three weeks. Later it was learned that they would be allowed to go out also on Monday and Tuesday, as well as workers to Givat Zeev. We arrived at about 6.15 and already as our car approached we saw many people with luggage ready for a long stay. We parked and made our way to the western side of the road so as to pass on the pedestrian bridge that separates pedestrian checkpoint from the public transport area. Only this way can one reach the Palestinian side of the checkpoint. We arrived there at 6.30.

Long lines reached right into the parking lot, as in the bad days of the old checkpoint. There were 2 lines from the Qalandiya direction and another from A-Ram. Under the roof, there was crowding, particularly next to the three entrances. The turnstiles at the end of the zigzag were closed so as to control entry into the building itself. And people were crowding in a way that we really have not seen for a very long time. And the noise also reminded one of the times when queues would collapse.  Happily, they did not collapse this time (or not from what we could see) But the crowding was unpleasant, especially for older folk – not to speak of corona danger! Everyone had masks, but many do not wear them until they enter the building itself. Many had large bags, even some blankets and mattresses, which of course slowed down the checking process.

We searched for our friend Abu Ramzi the beigel seller. Only from afar we saw him at the entrance to the parking lot Qalandiya end. When we went to him we learned that he, too, has suffered from the 'plague' of kiosk destruction and fines against local peddlers. A week ago, early in the morning, an Arabic-speaking inspector confiscated his wagon and levied a fine ("report") for 500 shekels, and forbade him from anywhere inside the fenced area. Apart from the financial loss, Abu Ramzi was very hurt – he has sold 20 years and never been treated like this. The soldier who accompanied the inspector said he was sorry but could not interfere. Abu Ramzi, like everyone, has suffered because of the pandemic  - with lower incomes many workers bring food from home rather than buy and now with workers being away for 3 weeks he will lose even more.

After a lack of success at the entrance to the parking lot he moved to a spot at a barrier on the roadway so as to sell to drivers stuck in the traffic jam, helped by a man on the other side of the barrier who was selling them coffee from a thermos.

The parking lot is completed and paved. Traffic lanes and parking spots are marked, but it is unclear for whom it is intended. The entrance is from the east and shut by a yellow gate, and only public transport can enter.

We went to see our friends in the kiosk on the eastern side. Last time we saw that the kiosk had returned to its former place, after completion of the approach ramp built for pedestrians, on land that actually belongs to the kiosk owners (intended for Fridays during Ramadan). Now the kiosk has been moved inside the parking lot. The kiosk owner said that once again they have been harmed by the inspectors. He knew the name of the person (Arab or Druse according to his name) but was not sure who was responsible – the municipality or the Civil Administration.  Either way, they had to move, equipment was confiscated and suffered financially. Anyway, the situation is hard currently and will be harder when fewer people come during the next few weeks. "What, are we forbidden to earn our living?" protests Aiman. They are the ones who look after the area, who put tires with rocks inside them on the sidewalk so that drivers won't park there and block the road for taxis and minibusses (and sometimes get traffic reports), The sign that operates the yellow arm at the entrance to the fenced parking lot is in their hands and they are responsible for allowing in public transport. For this, they are relied on, but they aren't allowed to earn a living.                                                                                                                                                      While drinking our tea there, we chatted with some people.  Z .has   been banned entry by Security and has tried a few times to have this lifted with the help of Sylvia, but unsuccessfully. As it is already over 6 months since his last appeal he will have to wait till next year to try again.  And if refused, he can take it to Court. But who has money these days, even at our reduced prices via the lawyer Tamir Blank?  Meanwhile, Z. earns his living driving people to and from the checkpoint in his private car.

Next to Z. stood a 19-year-old youth, son of an east Jerusalem mother and father of A-Ram.  But he has not registered anywhere. He has no identity number and, as far as either the IP.A. or Israel is concerned, he does not exist! His mother gave birth to him in an East Jerusalem hospital – so he should have been able to be recognized as the child of an East Jerusalem resident. Likewise, the mother should have been able to get a child allowance for him from National Insurance. But his father 'kidnapped' him from the hospital to avoid payment! So now we have in front of us this young man, strong and healthy, but who formally doesn't exist! Of course, there is no money to hire a lawyer to regularize his case. We referred him to HaMoked in the hope that they could help.

Z. complains that Abu Mazen and the P.A. don't give anything to their citizens, while Israel has social benefits, and he thinks that Netanyahu is good for us. He surprised us telling us that a secondhand car in Israel that would cost a few thousand shekels in Jerusalem with an Israeli number, in the West Bank would cost tens of thousands. We could not understand the reason for this – if true.

At about 7.15 the lines were much shorter and quieter. The lines were within the zigzag and we joined one trying to keep at a safe distance from others.  Of course other people overtook us to fill up these spaces. Inside, after the turnstile, there was a line for the checking machines. At our entrance, only one of the two checking stations was operating, but the line advanced quickly. Each time 4-5 people were admitted to the checking area between two turnstiles,  and after they have finished another group enters.

When we came to have our identity cards checked we were met by a young woman soldier who had never heard of Machsomwatch. We were told to stand aside to let others pass, while one of the soldiers went off with our cards to ask a security guard who also did not know what to do. After consultation by phone, we were given back our cards and allowed to pass. This delay took only 5 minutes and in total, we passed through the checkpoint in 15 minutes.  We reached our car towards 8 o'clock.