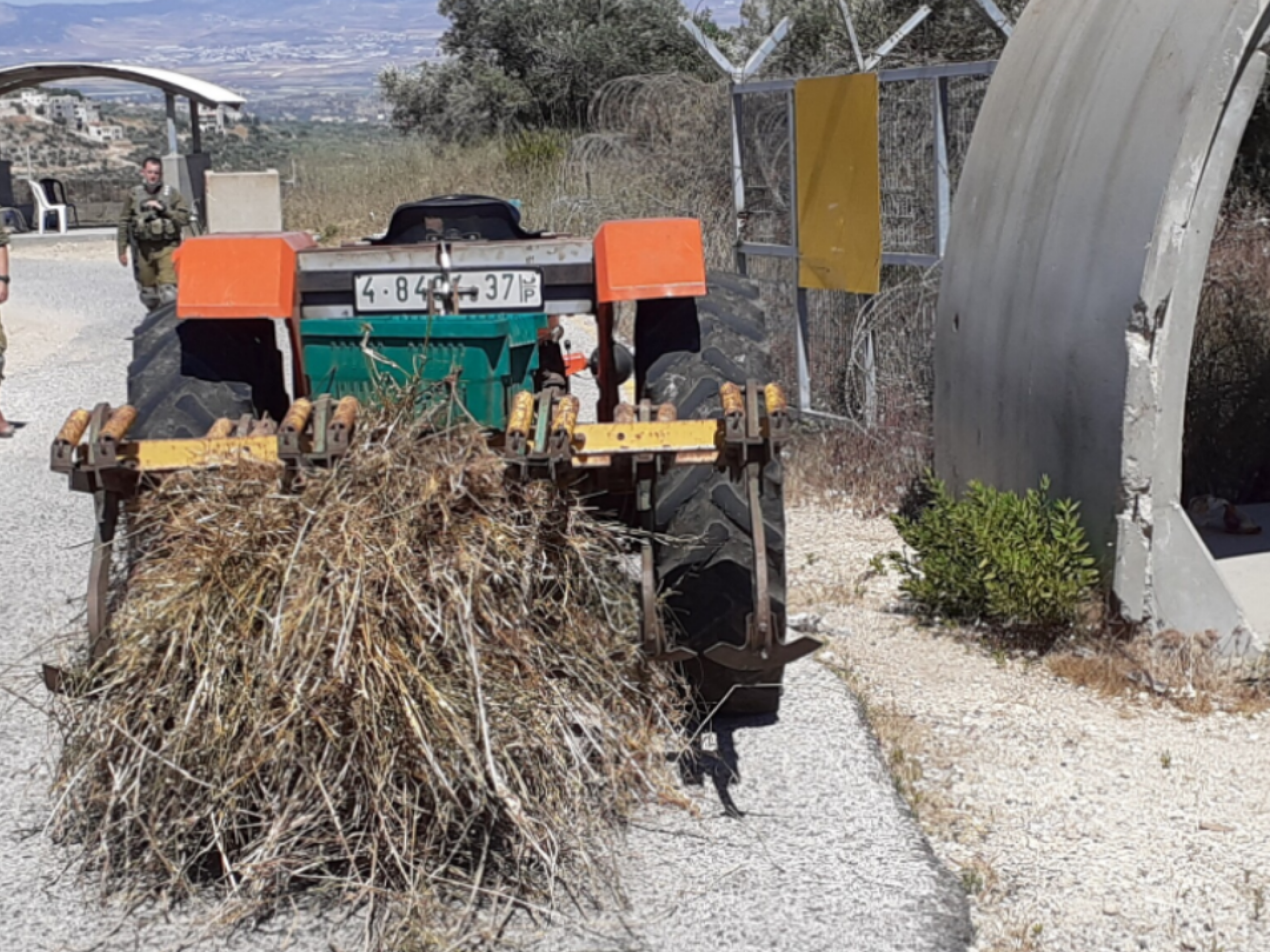 Anin checkpoint: finally opened to farmers, the thorns do not come off the plow

Three elderly women at the checkpoint are a crowd!

There was very little traffic in either direction.  Two commercial vehicles were parked near the checkpoint where a logo on the fence read: “Ilanit Gates

” – “Gates, Roadblocks, Turnstiles and Special Doors.” Now we know who is responsible for the checkpoints' being so well-equipped.

M., his son, and another person, as well as two tractors, were waiting to cross.   One of the tractors trailed long grasses behind it.  M. asked us to take a photo to show what happens in the olive groves after three months of forced neglect [because of the closure

, farmers could not tend their fields]

M. said that in the morning two people crossed, and on Monday he was the only A’anin resident who had crossed.  He said that they would open the checkpoint at 15:15.  The gate in the direction of the seamline zone is open, as it had been in the past few months.

Two bored soldiers were sitting in the shade of the awning.  They came up and said we were not supposed to be there and that we should go back to the junction because this was a closed military area.  When we refused to move, they called someone.  They claimed that we were causing a gathering, contrary to coronavirus regulations. They also said they would not open the checkpoint (see a report from 23.06).  An army vehicle arrived from the security road.  An officer got out and showed no interest in what had been going on.  Another vehicle arrived, evidently the one the soldiers had summoned.  An officer got out, with two soldiers, and demanded that we leave because we were blocking a security route.  Obviously we were not.  One of the soldiers looked at our tags and said fondly that Dafna, his grandmother, had been active in MachsomWatch in Jerusalem.  The two army vehicles left.  The soldiers, the tractor drivers in the shed, and we remained.  Meanwhile, an older couple arrived, residents of A’anin, who had crossed in the morning.

15:15 – A white military police vehicle arrived, and preparations to open the checkpoint's gates begin. The vehicle that had been summoned before came again and left.  Evidently our “crowd” was quite frightening.  At 15:25 the five residents of A’anin and two tractors crossed and we left.

We drove past Barta’a Checkpoint and continued on to Mevo Dotan Checkpoint.  We saw the tobacco fields in flower and some leaves already stacked up to dry.  At the unstaffed checkpoint, traffic was moving in both directions.

The checkpoint was unstaffed and there was little traffic.

16:00 – We returned to the Palestinian side at Barta’a Checkpoint.  The private parking lot was almost full and the large lot was crowded as well.  People were selling fruit and cakes from the trunks of their cars. We avoided going into the parking lot, which was crowded, and almost no one was wearing a mask.

Four trucks carrying cargo were waiting at the entrance to the vehicle checkpoint that were evidently the last ones to cross today.  A lot of people were returning from work and walking down the fenced-in sleeve

. The awning had been extended to the end but the new plastic sheeting on the walls had not yet been put up.