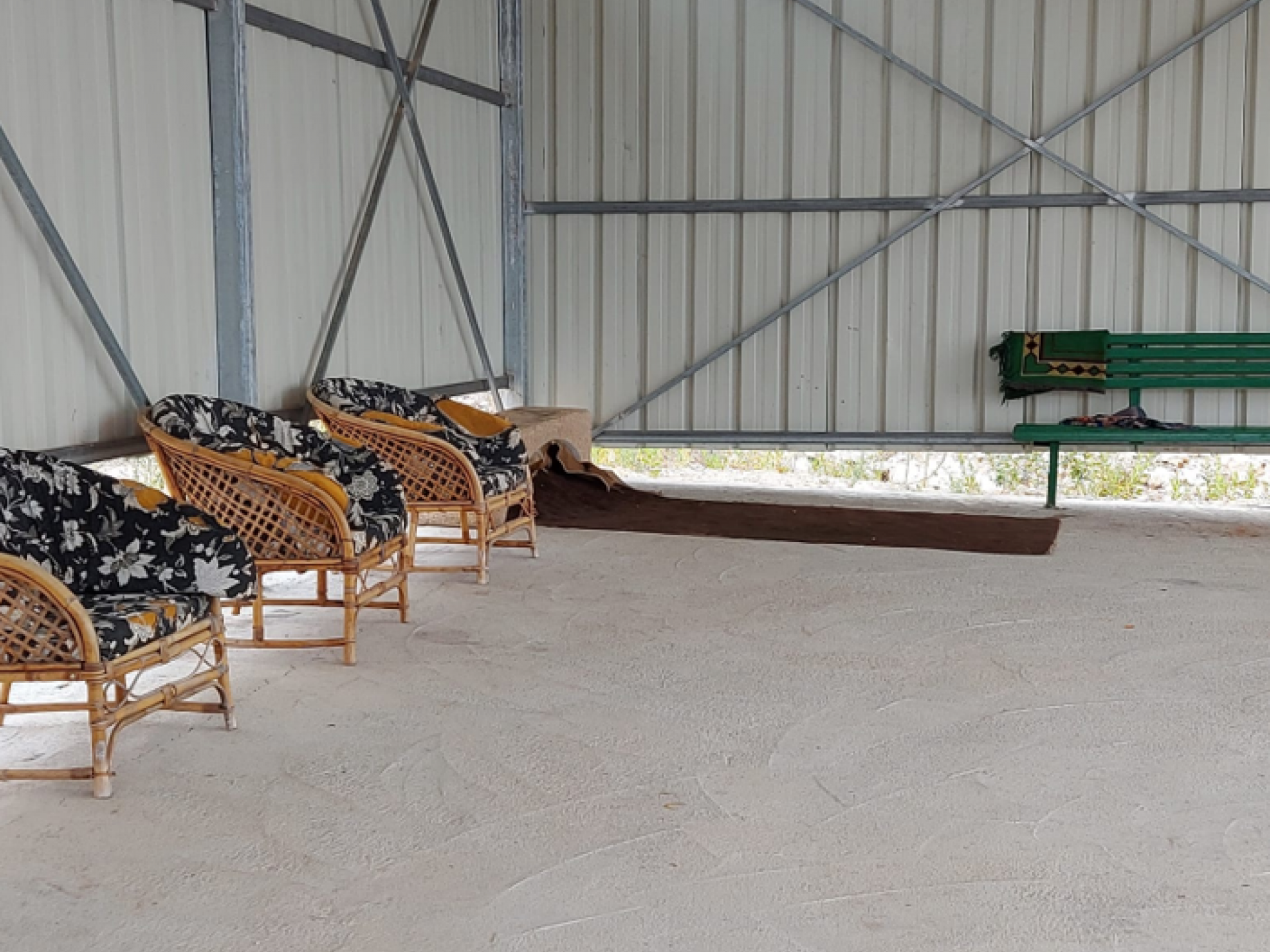 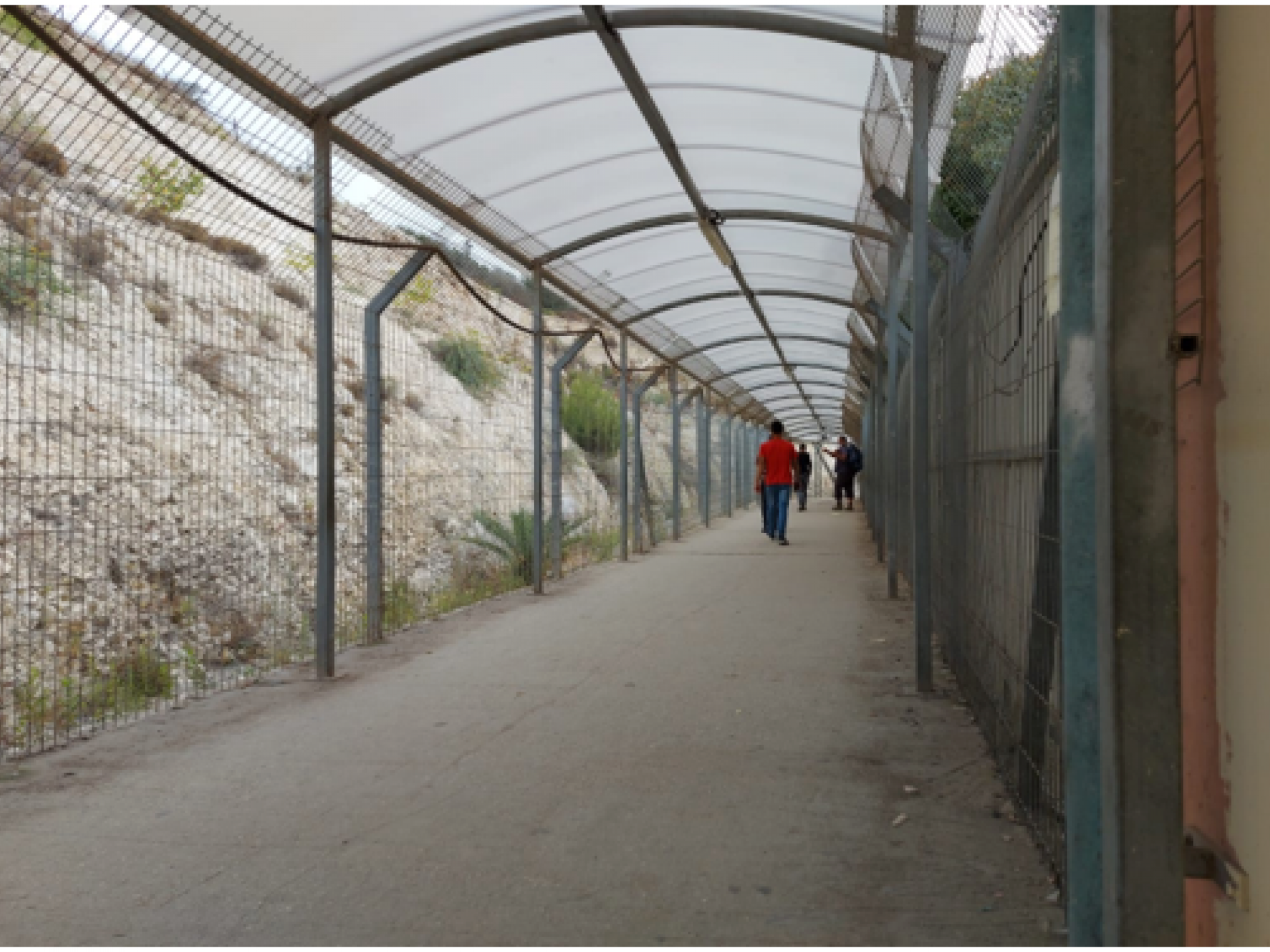 Barta'a checkpoint: In the mornings the checkpoint is quite empty. Most pass through loopholes in the fence 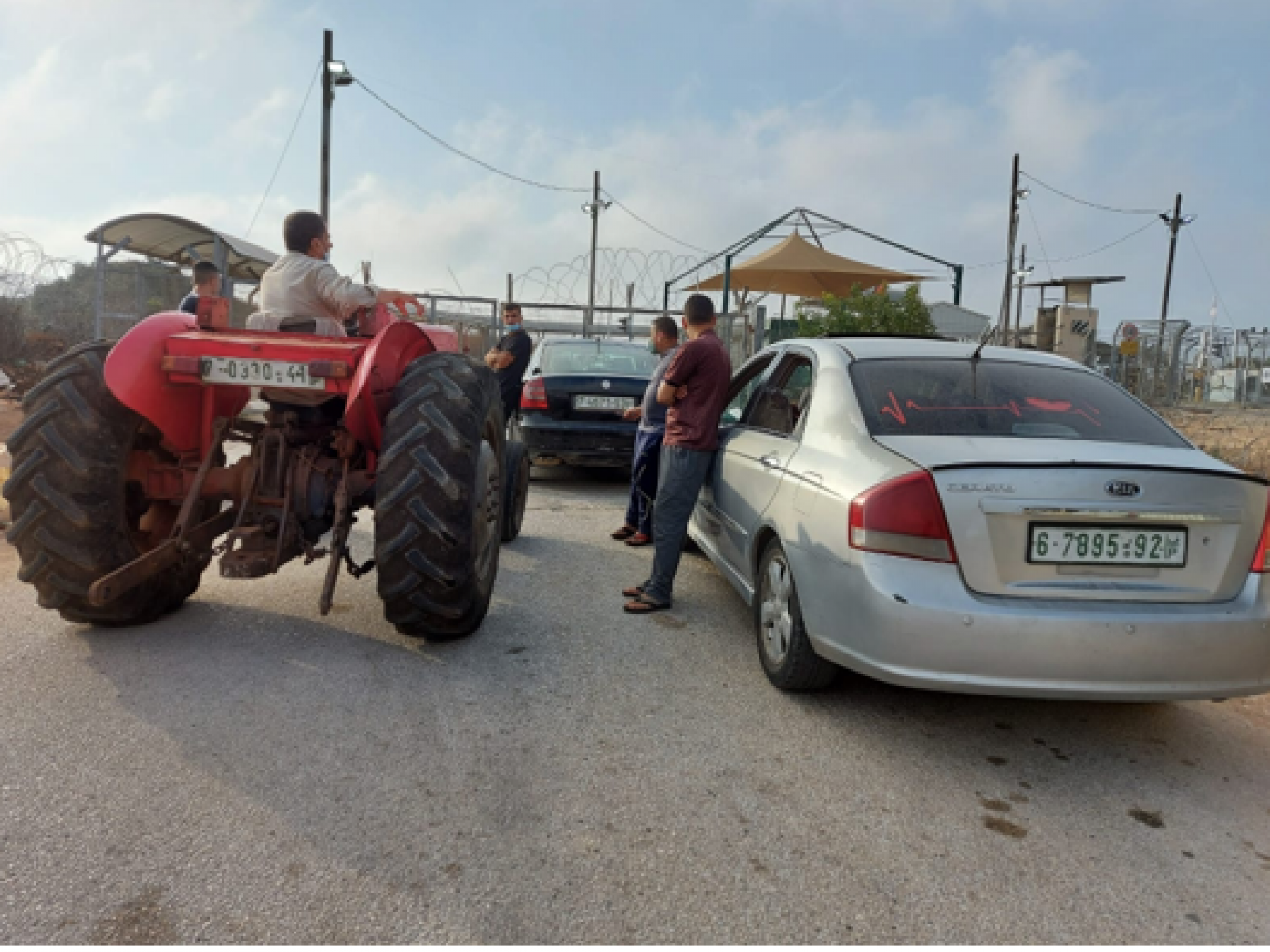 Tura checkpoint: a rare crowd, waiting for the gate key ...

05:50 – We pass through East and West Barta’a. On the border between them are two buses that take Palestinian workers to Israel - those who come through gaps in the fence, not via the official checkpoint.  On the road between Barta’a Checkpoint and the city of Harish there are three such crossings.  From the hill opposite Barta’a, a dirt road is filled with transport vehicles, taxis, vans, and private cars, as well as pedestrians. Some of them carry picnic coolers to work, sacks of vine leaves or corchorus olitorius, a type of jute plant.

06:15 – An army vehicle heads in the direction of the village, apparently to where the gaps are.  Soldiers toss smoke grenades that billow and spread out.  Within a few minutes, the traffic lessens and taxis leave for other gaps. The last few workers arrive via paths that detour the road.

06:25 – The army vehicle returns. The dirt road empties.  Perhaps they closed up the gap.

One of the drivers tells us that there are 50 gaps along the fence from Harish to Salam (Jalama) in the north. “There is no fence,” and sometimes, in the morning, the army plays a game of “cat and mouse.”

Fifty meters away, the game continues; the army vehicle arrives and the workers and taxis disappear in a jiffy.  The traffic of people on the hill changes direction and they pass through the fence in another place.

Next to one of the gaps we encountered a surreal picture: Soldiers sat on the Israeli side of the gap, and the workers were sitting on boulders on the opposite, Palestinian side: who will leave first?

Empty taxis pass through to the upper parking lot, next to the opening of the new sleeve

(the enclosed lane to the checkpoint), but here it is quiet and only a few workers, who work in the Seamline Zone, pass through.  One of the people who cross tells us that despite the few workers there are long delays inside the terminal.  Inspection of bags on the conveyor belt is delayed, the security guards leave to change shifts and to chat. He urges us to “write that down.  There are young men and women who know how to do the job on the Arabs.”

In another hour, the passage to East Barta’a of merchants and people who work in the plant nursery will begin.  The kiosk, which in the past was already open at 05:00, opened only now.

Someone who lives in Zabde, who has family in the Seamline Zone, approaches us.  He had a passage permit that was good until 2023, but the permit was canceled. We referred him to Sylvia with the hope that she would be able to help him.

In the upper parking lot Pierre, our driver, converses with the Palestinian drivers and they tell him about an illegal settlement; settlers come into an empty Palestinian area with a single caravan, an Israeli flag, and a gun, and settle there. They also tell Pierre that next to the agricultural checkpoint Tayibe-Rumana there is a gap controlled the underworld of Umm-al Fahm, and they collect a few shekels from all Palestinians who pass through.

This checkpoint, which today is supposed to be opened at 07:00, is still closed.  One person, who is in a hurry for work in Jenin, waits patiently.  He learned: “Don’t complain; just sit and wait and suffer.”  The soldiers appeared at 07:15, but they didn’t have a key.  In the meantime, other people gathered on both sides of the checkpoint.  At 07:30, the key was found and the checkpoint opened.

Pierre, our driver, who also transports workers coming from Jenin to work in Haifa, tells us that at Megiddo Junction, every morning, floor layers (who passed through the gap) wait for transportation. For some of them, the contractors provides living quarters in the city. At a later hour today, he had heard in Barta’a that “an army operation," held today on the road next to Barta’a, was mainly against the passage of merchandise to the market, and that the passage of workers through the gaps in the fence really wasn’t bothering anyone.