In Humsa in the Jordan Valley, the army once again left homeless people and babies | Machsomwatch
Skip to main content
Back to reports search page

In Humsa in the Jordan Valley, the army once again left homeless people and babies 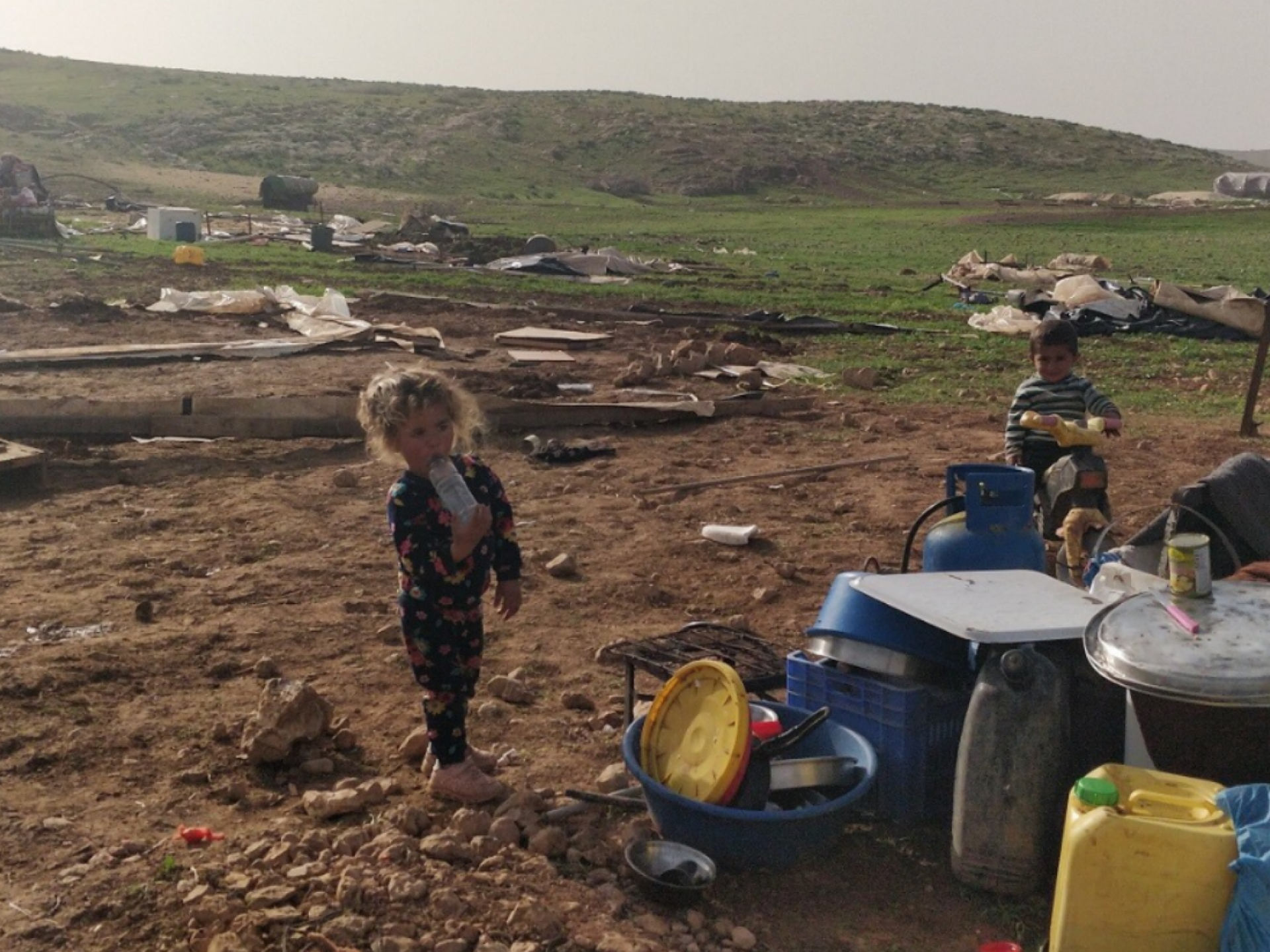 Humsa children play among the ruins of their homes

Humsa children walk around the ruins 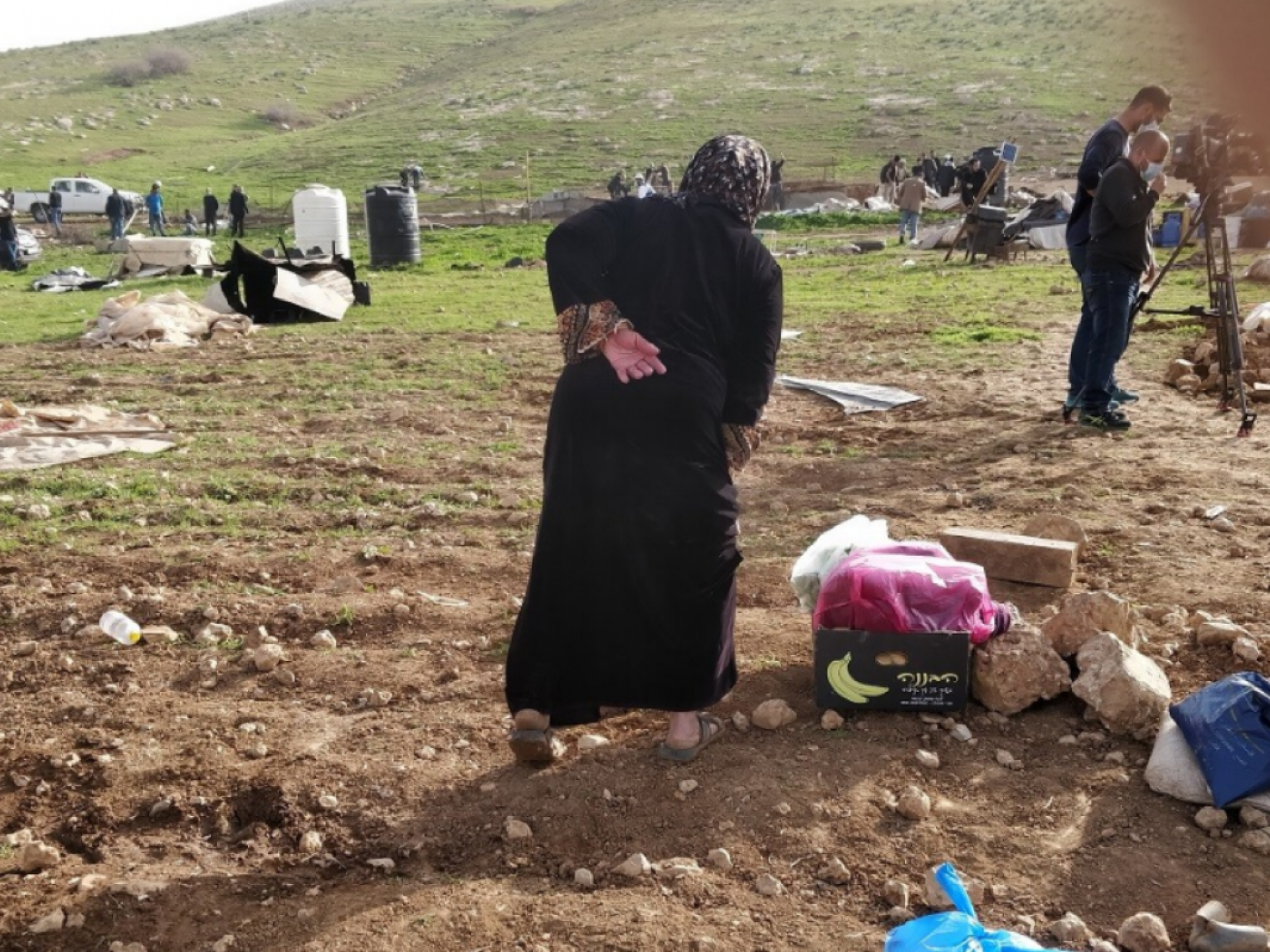 Humsa, Jordan Valley: In the area of the ruins, the old woman turns her back on us and walks away

In the rubble area, old Aisha turns her back on us and walks angrily 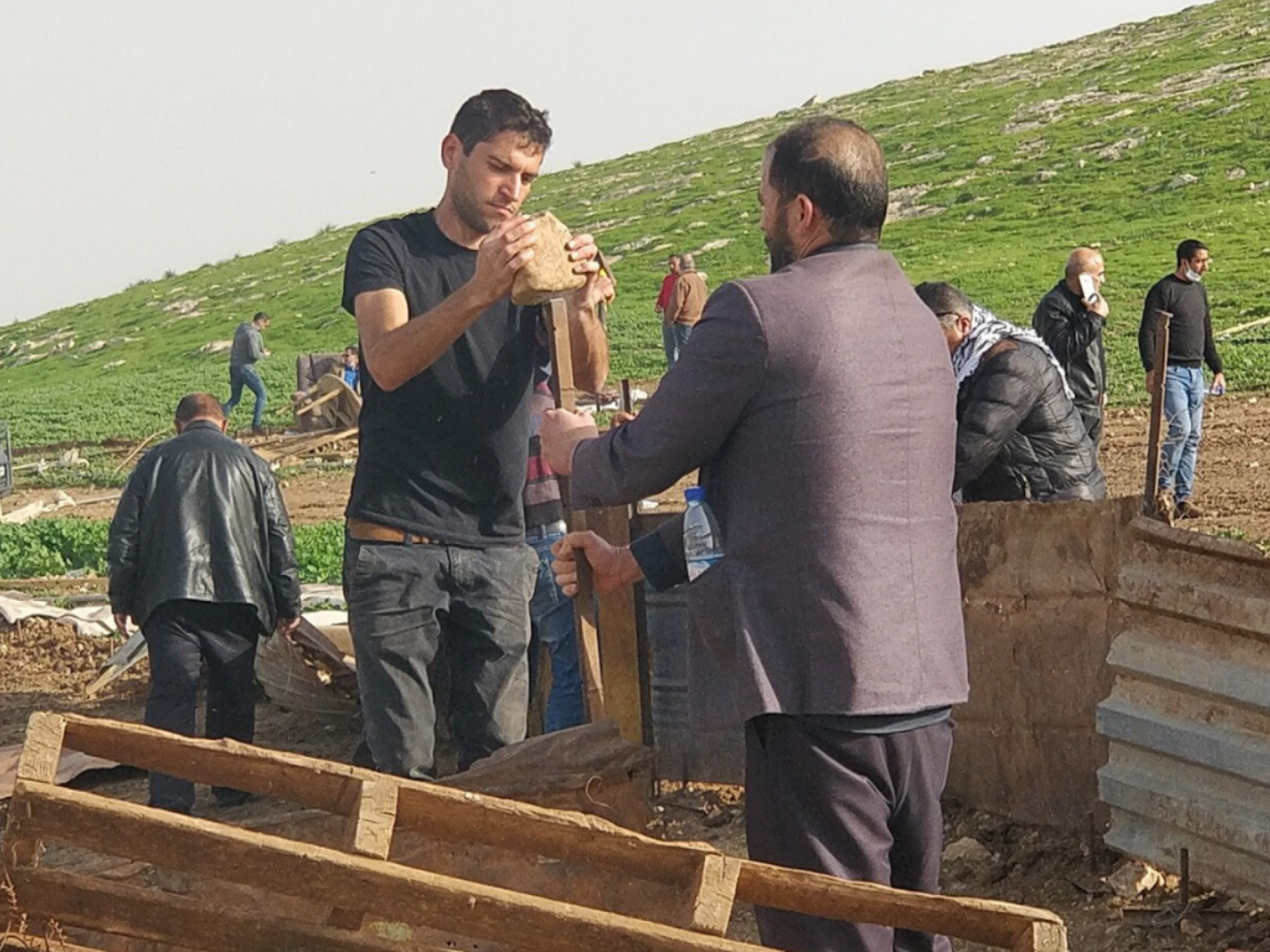 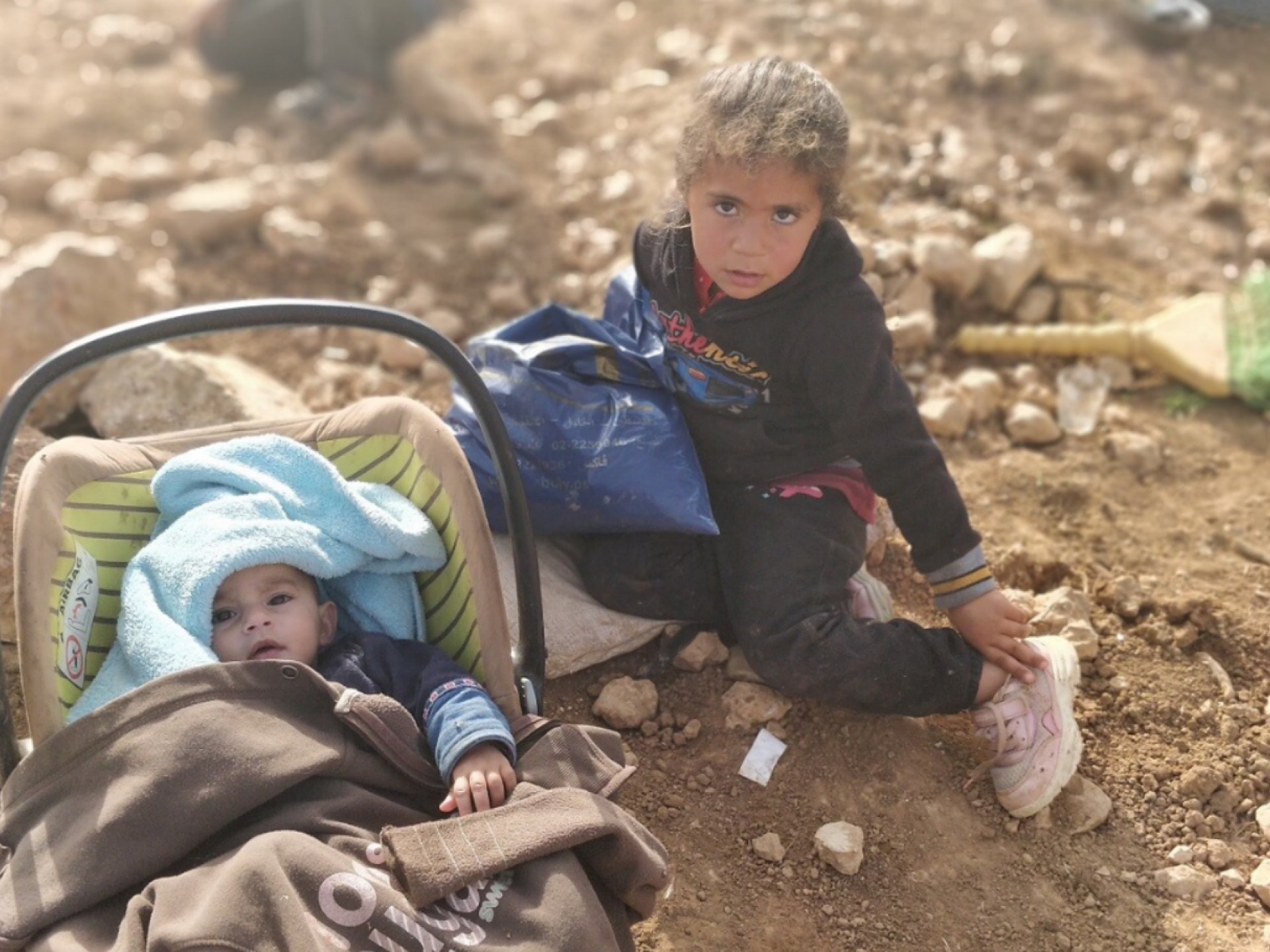 Humsa, Jordan Valley: These children do not have a home, again the army destroyed it

Two of the children of Homsa, an infant and a toddler whose the biggest Israeli army destroyed their home again

Emergency Call – Humsa villagers have been left with absolutely nothing. They sleep at night out in the frozen desert, and this includes 4 babies of less than 6-months of age. We need financial aid, sleeping bags, camping tents and torches to help these brave people hold on to their land.

The wheat has begun to sprout in Humsa fields, the sun shone – and the world went dark for the 75 villagers of Humsa for the second time these past two months.

At 10 a.m. on the morning of February 1, 2021, dozens of truckloads of officials arrived at Humsa. They passed from one encampment to another, and as cold-bloodedly as only heartless people can, took apart tent after tent, one sheep pen after another, outdoor ovens, covers of sheep fodder. They folded everything and coolly loaded the trucks along with all the sticks and rods that had held everything together.

Until the desert’s frozen evening hours, there was nothing left but angry people, weeping women and frightened children. The Israelis took apart and confiscated even the partitions of the sheep pens.

Anyone who has never witnessed people remaining homeless, defenseless, without the warmth and strength one gets from walls, even from sheets or planks, anyone who has never seen the terrible breakdown in their eyes – could never understand how horrible this all is.

The young female and male soldiers, heroic in their own eyes, remain indifferent. The broken people they see are not human as far as they are concerned. The same propaganda that denied humanity of the Jews 70 years ago and sent them packing to gas chambers because the Germans did not regard them as humans, that same propaganda is exerted today upon those Jewish youngsters, and hence – everything is possible…

Before that last soldier exited their compound, the Palestinians already took out metal rods and began knocking them in the ground with stones. Measly sheep pens, an outdoor oven for food that no one will be able to swallow, and nylon sheets to cover their bodies at night. In the night, the Palestinian Authority also brought 2 tents, metal rods and a cover for the sheep pen.

Two days later the trucks came back, this time with bulldozers, and demolished everything. Whatever they did not demolish, they confiscated.

girl. She wept bitterly. Aisha, an ill elderly woman who cannot straighten up, sat in the sun on a crate inside a pile of things that were once home, and prepared cheese, surrounded by the dead bodies of lambs run over by the trucks, and millions of flies. We brought fruit and vegetables but she refused to accept them. She turned all of her rage and pain against us. And we had no words. What can I say to a woman whose life is ruined by my people time and again? I tried to take her hand, but she quickly pulled it away from me. So we just sat there, Ruti and I, quietly, with her. Then her daughter-in-law brought one of the babies to her, and her anger began to die down. Ruti tickled another of her grandchildren and his laughter broke the ice.

Again sheep pens were built, our activist friends working with the Palestinians. And again the PA delivered 2 tents.

I left, broken and aching, but with admiration for the villagers of Humsa, determined to rebuild time and again (as if they have any other choice!). My friends remained to continue rebuilding with them.

With nightfall, in total darkness (since the November demolition they have no more solar panels to produce electricity), the Israeli army for the second time that day, and took away ‘the poor man’s sheep’ – the little that the villagers had built of remaining bits strewn in the open, and the tents meant to protect them from the horrid cold.

No doubt this is not the end of the story. One of the strongest and most heavily armed powers in the world is out against old Aisha and Nidam and Kharbi! 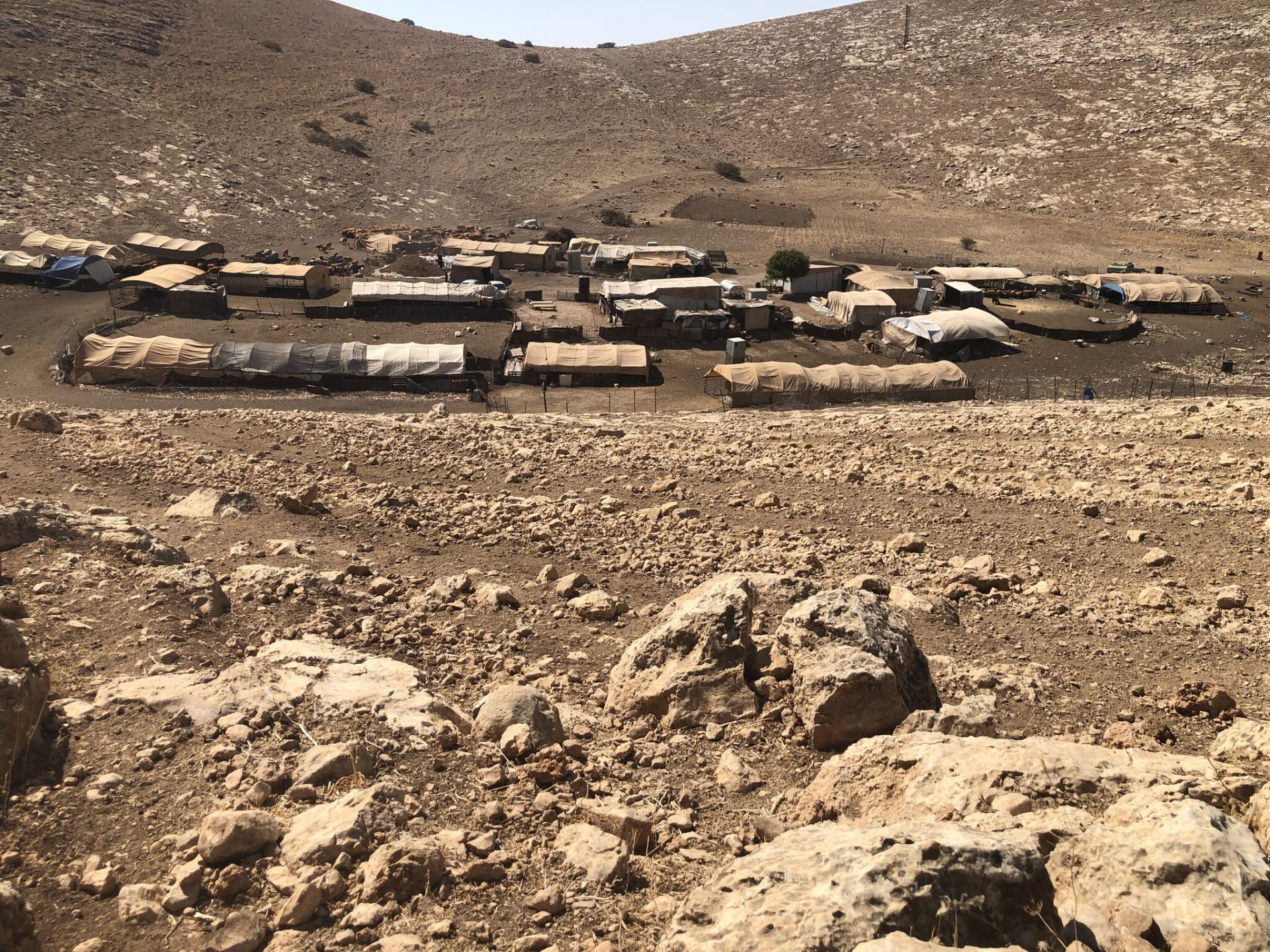