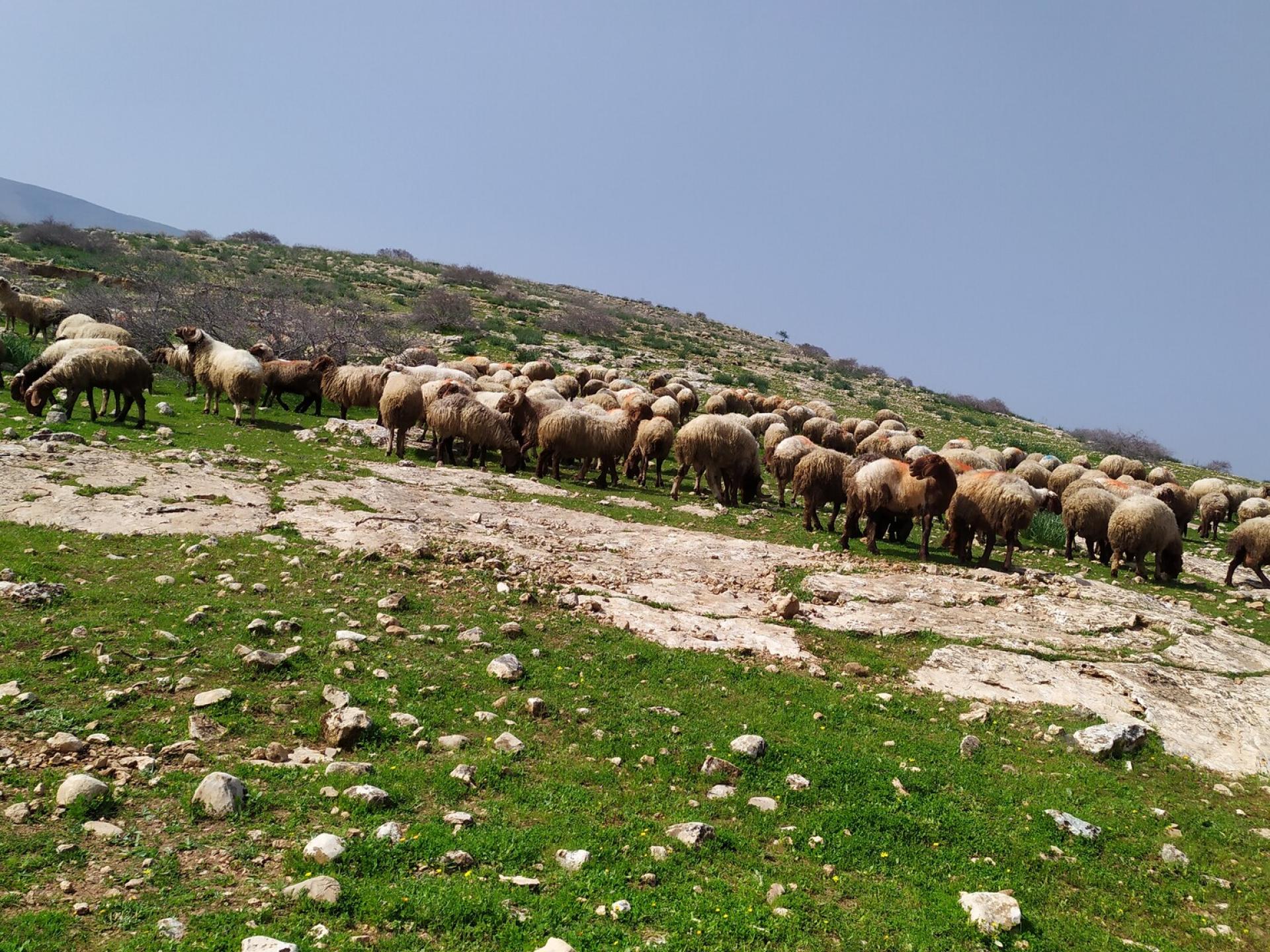 A herd of shepherds from the Palestinian Hamra 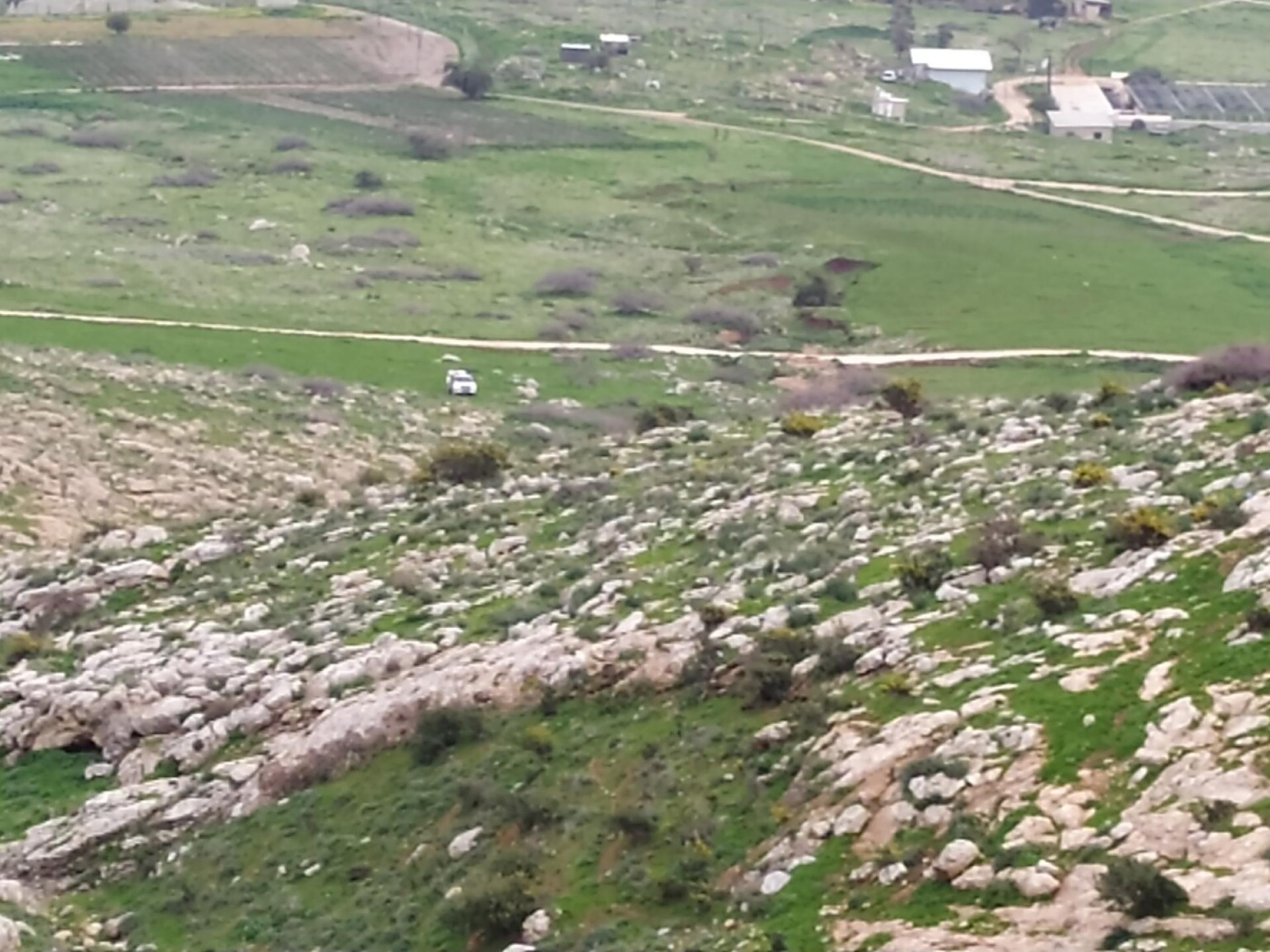 The occupied road to Sharvit's outpost, where he and the law enforcement officers met 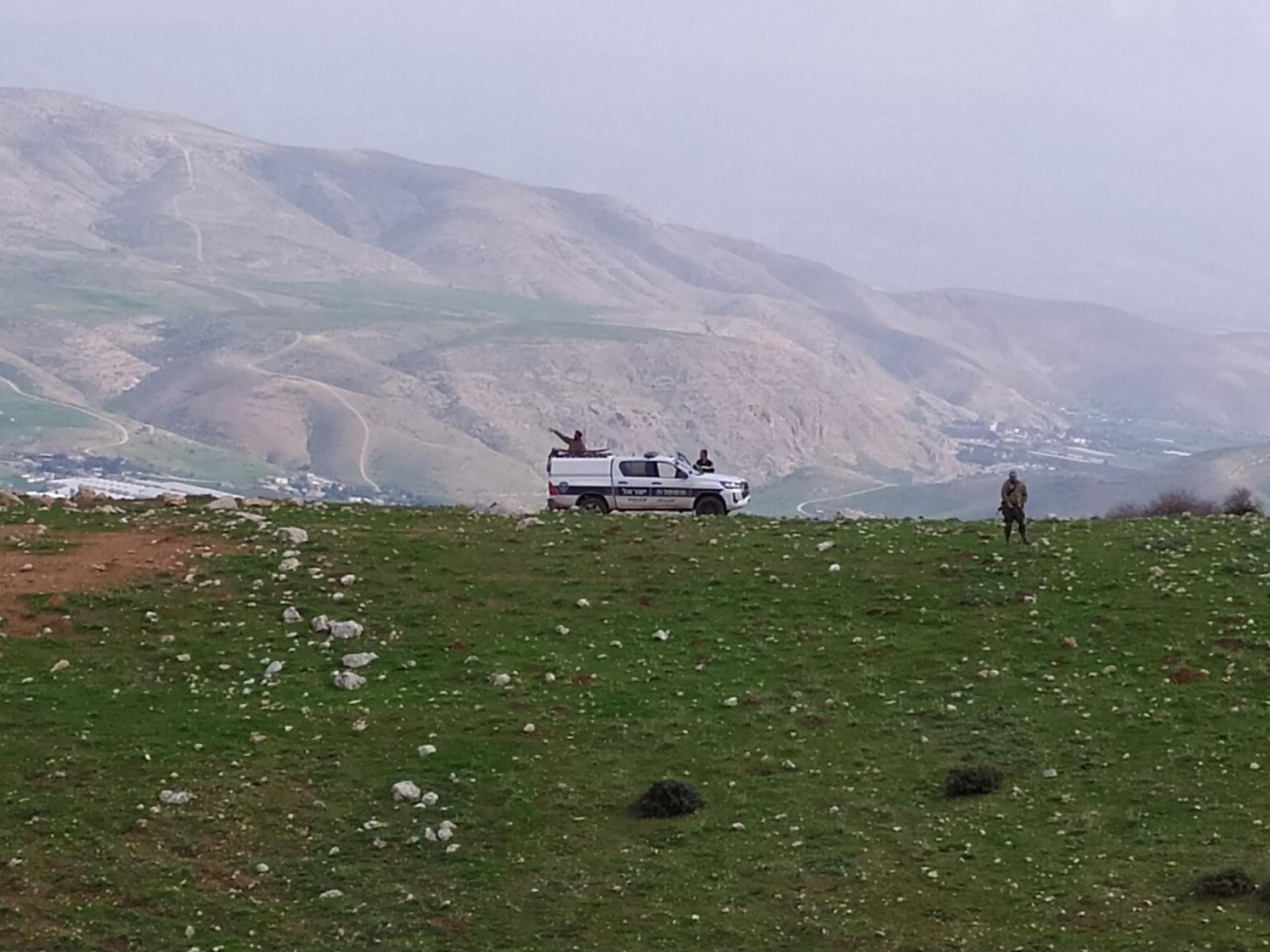 There were violence incidents on three of the five days we accompanied shepherds. Some examples: The photo of the hill and some of the flock shows the grazing area of the shepherds from (Palestinian) north Hamra, which is to the west of the settlement of Hamra and slightly north of the illegal outpost of the abusive settler, Moshe Sharvit.

On February 13, Sharvit sent representatives of the army to have the shepherd and his flock removed. There was an obstinate argument. The shepherds’ escorts presented a map showing that the area is open grazing land. The soldiers argued that it is a closed military area. The escorts insisted and went a bit further. The soldiers threatened to call the police. We saw a police car in the distance but no one came nearer. The shepherd and the flocks went back to grazing.

On February 18, the settler and a companion emerged from the top of the hill with a radio blaring music at full volume. The flocks of the two shepherds scattered. We three escorts immediately ran towards the people approaching and began to block them with our bodies while running and filming. Some of the videos can be seen on Facebook. We managed to prevent them coming down to the bottom of the hill. They were attempting to make the flocks run away, at the same time declaring that we escorts are anarchists and that Palestinian shepherds are forbidden to graze their flocks anywhere in the area.

While all this was going on, the settler was busy with phone calls with the army and/or police and feeding them false allegations. The abusers threatened to call the army and left. Soldiers arrived, including a female first lieutenant, who shouted rudely (in Hebrew) to the shepherd to clear off. The other shepherd had already left in any case. We remained with the shepherd until he’d finished grazing his flocks and then went to file a complaint with Ariel police.

On February 16, a farmer arrived on horseback along with a foal, with the aim of dispersing the herd from Hamra south. The escorts stayed close to the mare, while running, filming, and listening to the lies that the settler was feeding the police and army.

The photos show the occupation road to the farm where we met enforcement officers with the farmer and, on the opposite hill, policemen accompanied by an armed soldier.

During the escorting on that day, no one from the abusive occupation teams came near to the shepherd and his flocks. It was simply too hard for them to climb up and down and climb up so far away and so high up.

As usual, the settler manages the occupation forces, shows them the grazing areas and “the limit of grazing areas for Palestinians,” where they invaded “his” grazing area. As noted, the outpost was built illegally according to any recognized civil or international