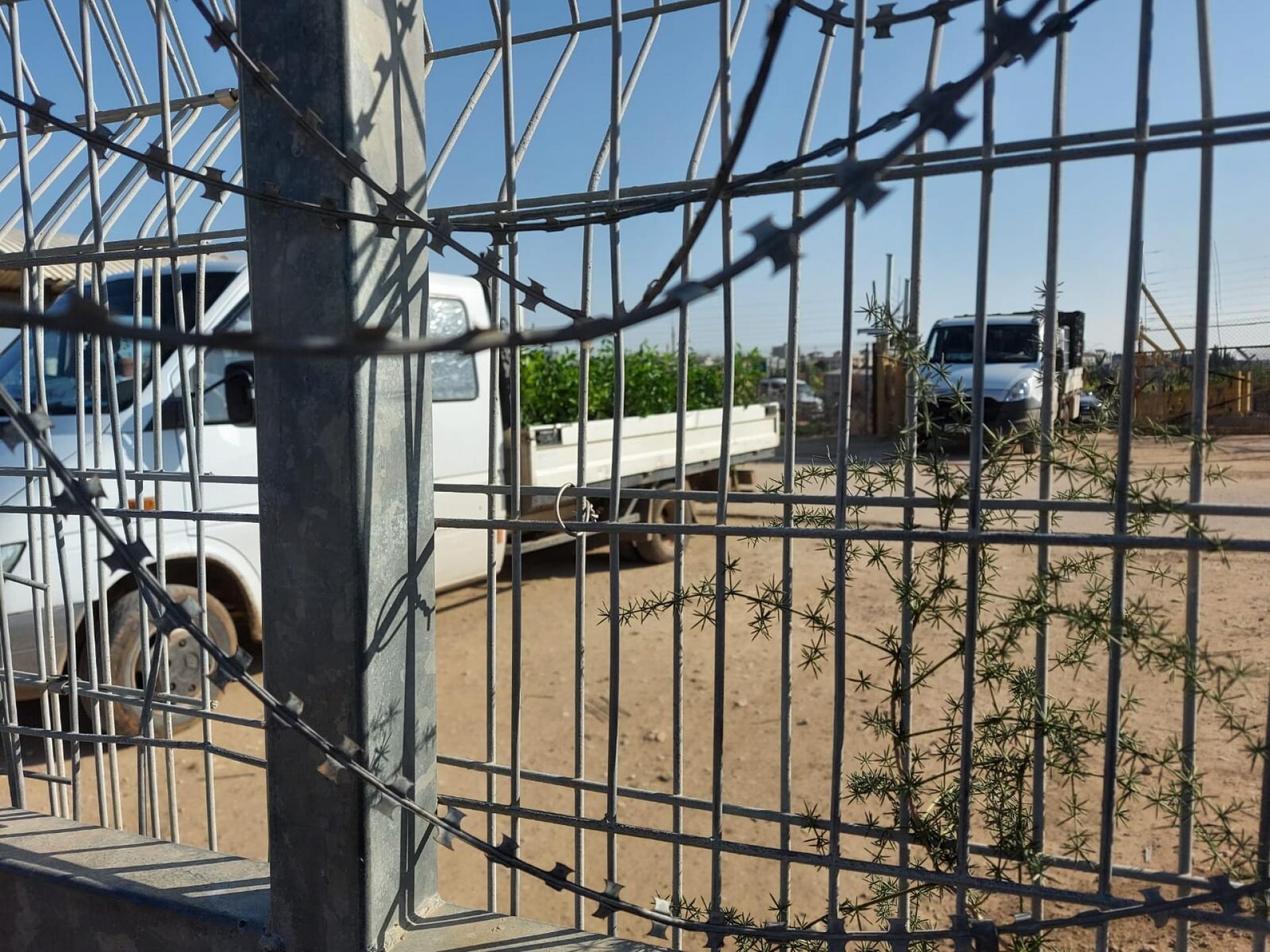 The checkpoint opens late and the cars wait 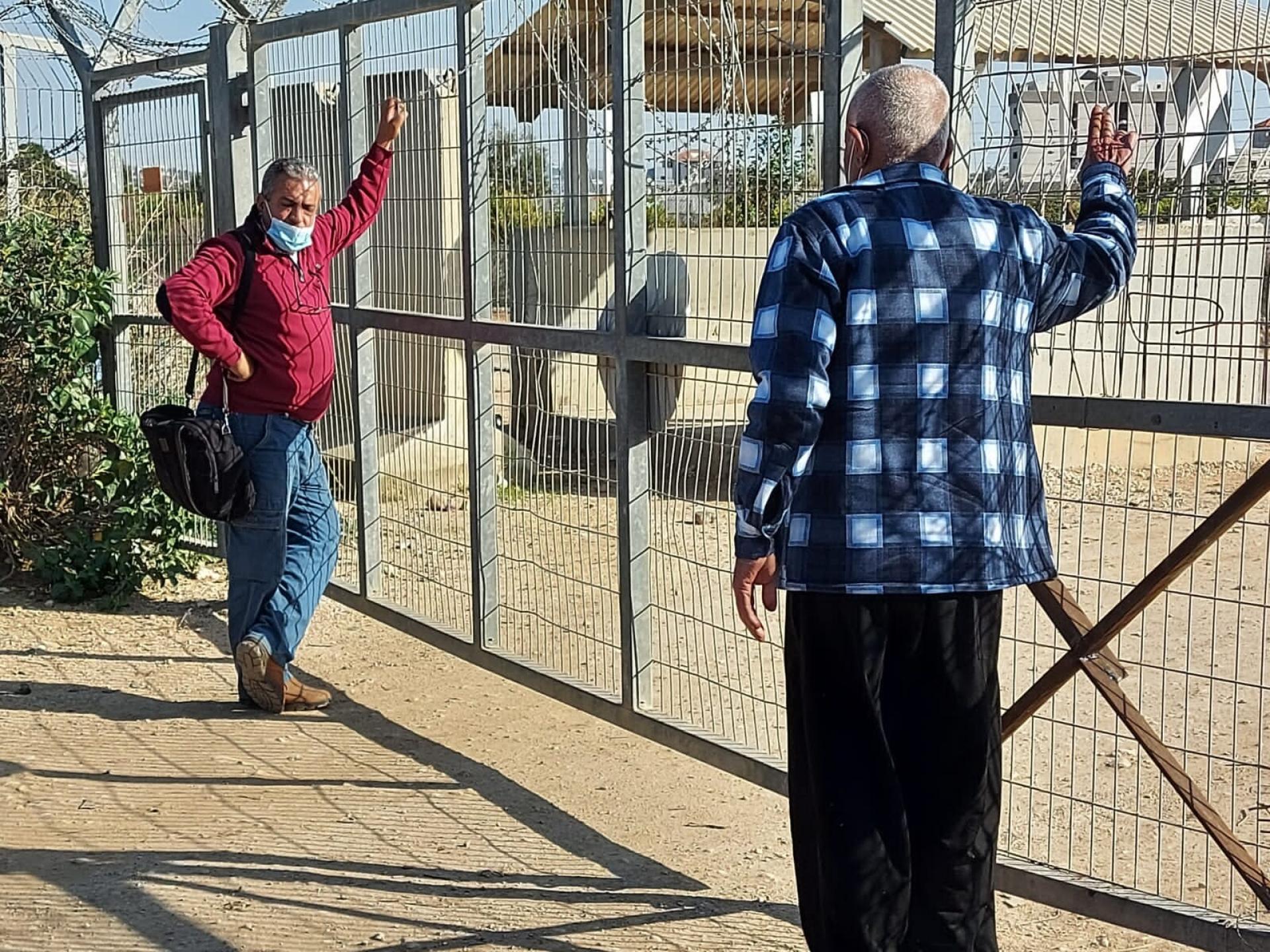 Waiting for the checkpoint gate to open

The gate opened late. Two Palestinians are waiting for the checkpoint to open 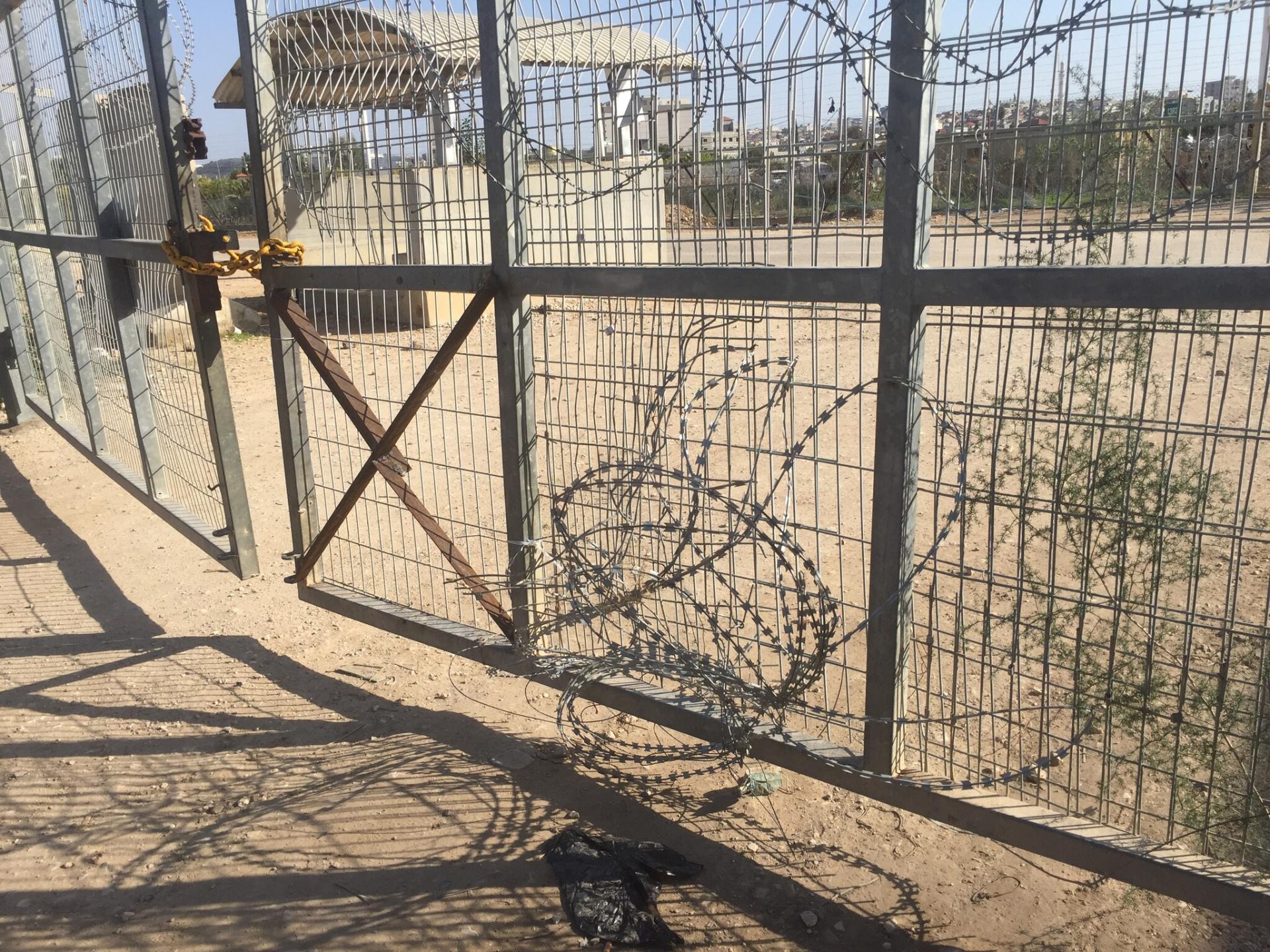 One breach in the fence was closed. There are more loopholes and this too will reopen. 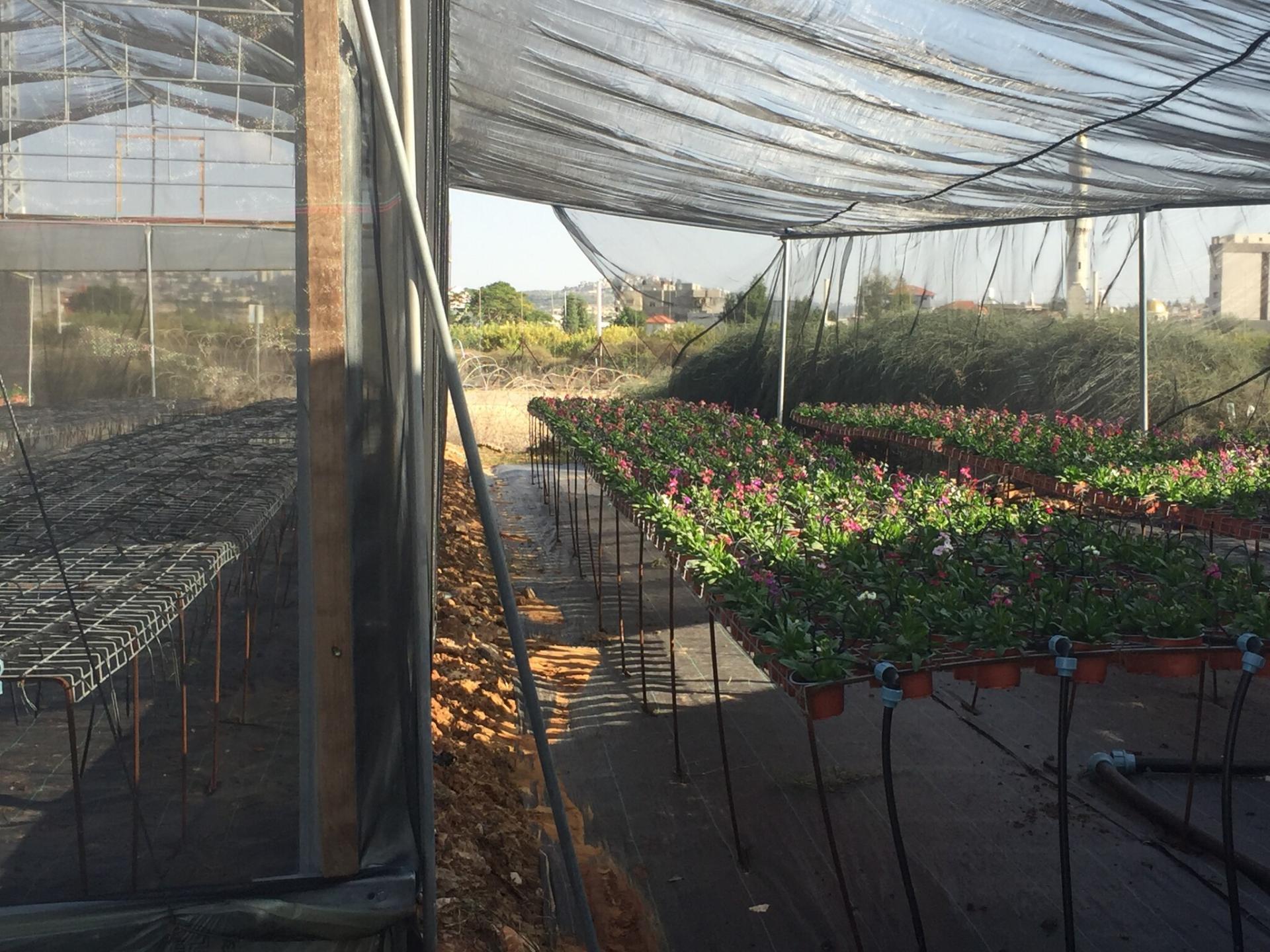 New nurseries are opening near the checkpoint 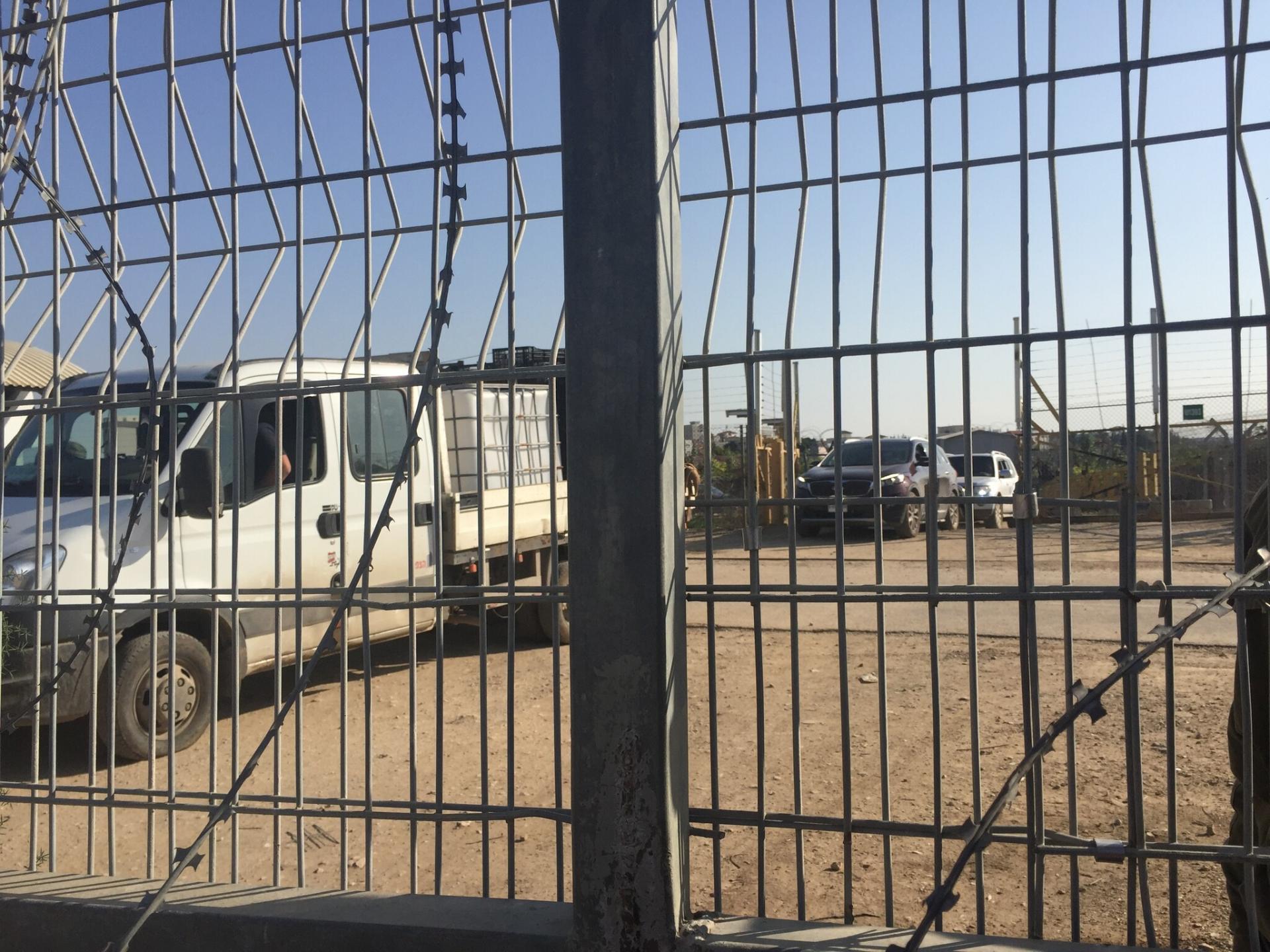 Z., our friend from ‘Azzun, isn’t working, nor is his son.  Both have been blacklisted.  Why?  Not clear.  The olive harvest has ended, and what little income that provided is gone.  One of our cars is filled with clothing and second-hand goods that can help him and his small family.

Even though I arranged with Z. to be home, he isn’t there.  He went to his sister, who’s ill.  We spend time with his very slender wife, trying to practice our Arabic in conversation with her.  We also buy olive oil, and politely refuse an invitation to eat with them because we’re hurrying to the checkpoint, hoping to arrive before it opens.

No military presence at the entrance to ‘Azzun.  There are hardly any military vehicles in the area.

The Habla checkpoint is scheduled to open at 13:15 but, as expected, by 13:40 there are still no soldiers on site.  We grin as we see youths going through gaps in the fence, entering without waiting for the army to let them in.  One gap that was there for a long time has been closed.  The soldier who finally arrives says that, based on his experience, it will soon reopen.  No need to worry, though – there are many more like it.

Vehicles wait on both sides of the checkpoint.  One driver grumbles at the army’s indifference to the time those waiting are forced to waste.  It also bothers us.  Shoshi telephones the DCL, reports the delay.  The soldier she speaks to makes a note. So?  So she made a note.  We use the time waiting to look at the new, well-organized plant nurseries.

When the army finally shows up, one soldier approaches to ask whether we’re not afraid of being attacked.  We again explain that the Palestinians won’t injure us.  He looks at us as if we’re learning-disabled.  “It’s dangerous here; someone could plan an attack and hurt you also.”  Again and again, we explain the Palestinians won’t harm us, but we can’t convince him or his buddies at all.

Another soldier from the unit asks why we’re not writing anything down.  “The women who were here this morning wrote everything in a notebook.”  He’s offended.  We told him we’ll remember…he shouldn’t worry, everything will be reported.

We asked why they were late.  The soldiers are annoyed – when they’re delayed at one checkpoint it causes a chain of subsequent late arrivals.  That’s what happens when they move from one checkpoint to another.  The man waiting for the checkpoint to open says the soldiers take their time, chat among themselves, laugh, waste time intentionally.  What’s the truth?  Somewhere in the middle.

Crossing proceeds smoothly.  The soldiers check the permits, let vehicles through, and shortly the checkpoint empties and we cross to A.’s plant nursery.  He says there aren’t many people crossing on foot because everyone goes through the gaps.

We have coffee with A., buy some remarkably inexpensive flowers, and drive home.

We call this a “mini” shift.  It can’t compare with what happens in the Jordan Valley. 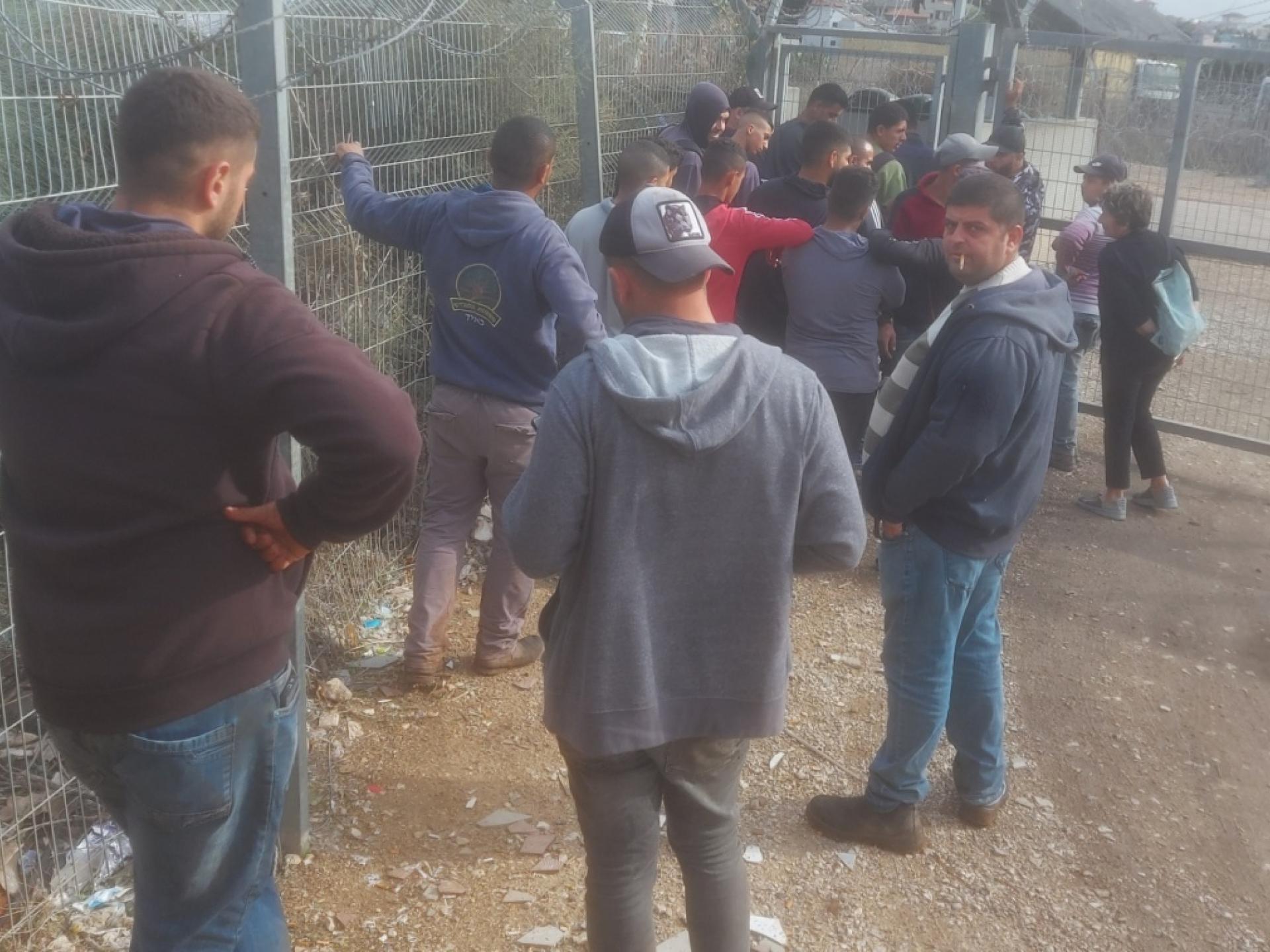