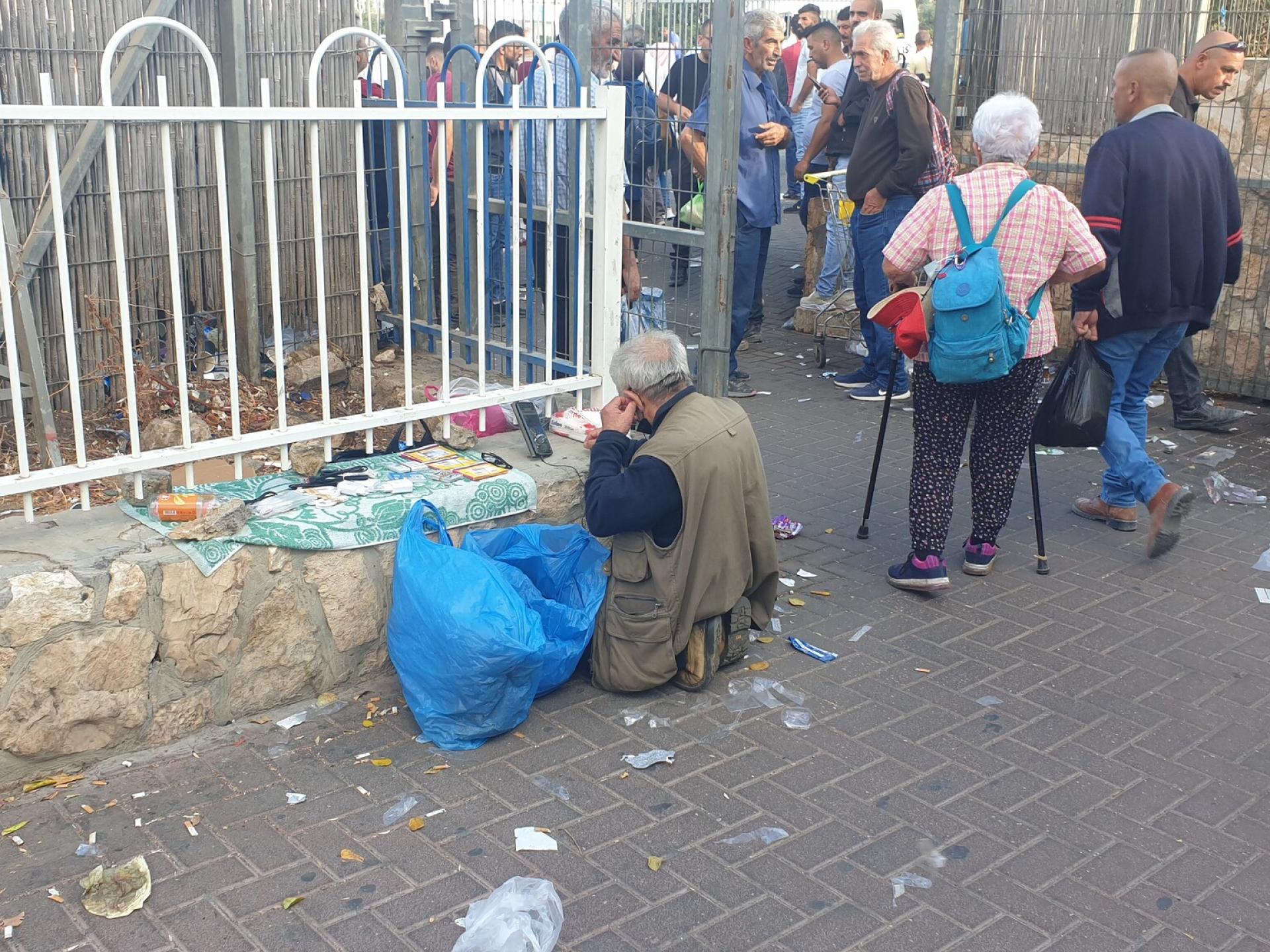 Bethlehem CP - trading next to the CP 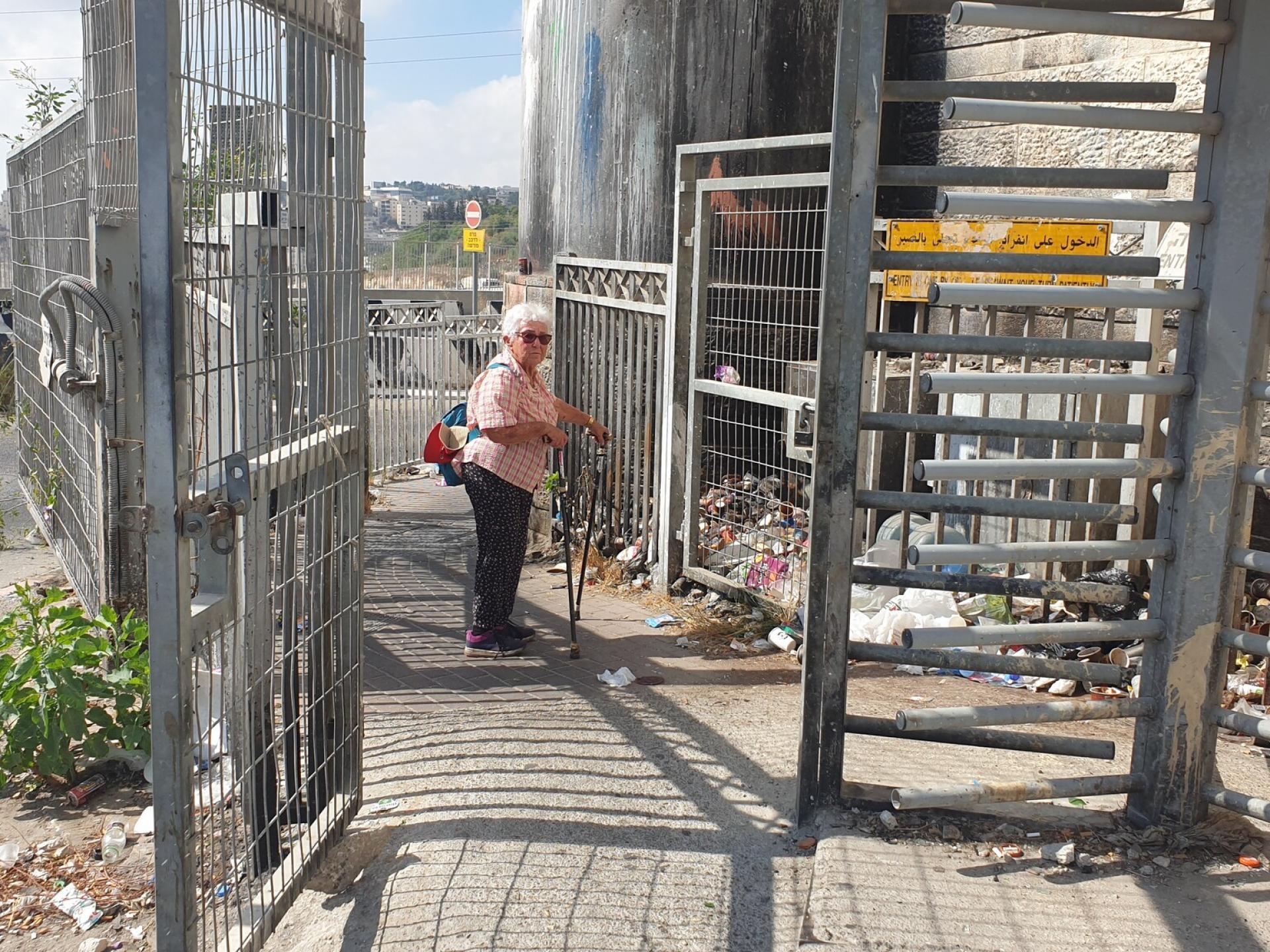 The morning after the attack in the David's Tomb complex in the Old City, senior commanders showed up at all the checkpoints we were at. The workers went through as usual and no special stress was evident. The Olive and Shuafat checkpoints are very neglected. We received a serious complaint about a Jerusalem family being prevented from crossing the Shuafat refugee camp checkpoint to Jerusalem for a funeral.

Outside the barrier there is a tense atmosphere, of restlessness and everything is mixed with a depressing complacency. Dozens of male and female workers flock to the shuttles to Jerusalem and even a minibus or two announce their destination as Tel Aviv. There are also many who are sitting on the fence waiting to be picked up - some of them already have work and some are simply hoping that a contractor who needs labor this week will come by. Men and women we spoke to said that there was a large crowd on the Palestinian side earlier. From 4-7 the pressure is great. Now it's quite empty at the exit on the Israeli side - only the far stations are open.

The police officer who was called to meet us (as usual the security guards said we had no right to be there) says that the humanitarian crossing was open until 7 in the morning for the passage of women, the elderly and the sick and now it is closed. Could it be that Hanna Barag's complaints started to work? There is a feeling that they are really making an effort today to show that everything is fine even though more than 13,000 workers have already passed. And it really seems so. Only the recurring argument that we need to be guarded, because the checkpoint is a dangerous military area!!!.

We meet with M. from Bethlehem (Tuqu’a) who is trying to find a job in Jerusalem to support 3 children. Her husband left her. Anything, she says. The problem is that she does not speak Hebrew or English at all. We promised to help, and today they announce to her that there is a company that needs her for a project of a few days. We will have to bring her the first time. Let's hope it goes well.

It's already late, 8:30. There are no few workers . As in the previous shift, we encountered a problem of the use of the humanitarian gate. Two women and an elderly man with a huge suitcase press the bell to open the gate instead of the turnstile that will not pass the suitcase. To our surprise, although not a word was heard from the other side, after a few minutes the door responds to a push and opens. Several people are waiting for the checkpoint, and there is a mess how things are being handled. Two senior policemen, a soldier and two female soldiers take a long time to let the people pass through. Someone needs to be physically examined, and even though there are enough soldiers to do so, in the meantime no one is allowed to pass. The communication device doesn't work either and neither soldiers nor Palestinians can hear one another. When we ask to open, to transfer, the senior policeman gets angry with us - "Enough, we've been here since four in the morning". We are marked as enemies. And when we leave, we think that we would like to convince them to treat the Palestinians at the checkpoint like human beings who are rushing for their lives, not to cause a backlash. How do you do that?

Garbage and neglect. Outside the checkpoint and inside it - at the pedestrian crossing. The x-ray machne does not work (we asked since when, they hesitated and said since yesterday). In front of us, a woman takes one item after another out of her bag in front of the soldier behind the armored glass.

Lots of policemen, security guards, border guards outside. The truth is, there is always an abundance of personnel here, Today after the attack last night there is also a lieutenant colonel of the Border Police. I take a picture from a distance at the exit of the checkpoint, and immediately almost all the security guards rush over to us. "It is forbidden to take pictures here - it is a classified security area." They take my ID ("They are in the police database" allthough I had already been checked - ah, I get the Palestinian treatment of being searched). They arrive with the tablet of taxes and fines and return the ID as we are not criminals. In the distance, I photograph again, and a woman soldier screams at me. They calm her down. Again, as always , we are the enemies of the chosen people.

More importantly - I am attaching a video that we received from a familiar and reliable person, which describes what happened at the checkpoint last week in the afternoon. A family member died and they were on their way to the burial in the old city. The whole family is from Jerusalem - they have blue certificates. In any case, after the ambulance with the body, the family was prevented from passing. They argued, one of the boys cursed, one of the boys scolded - gas grenades were thrown. The son was detained for several hours. The family eventually moved. 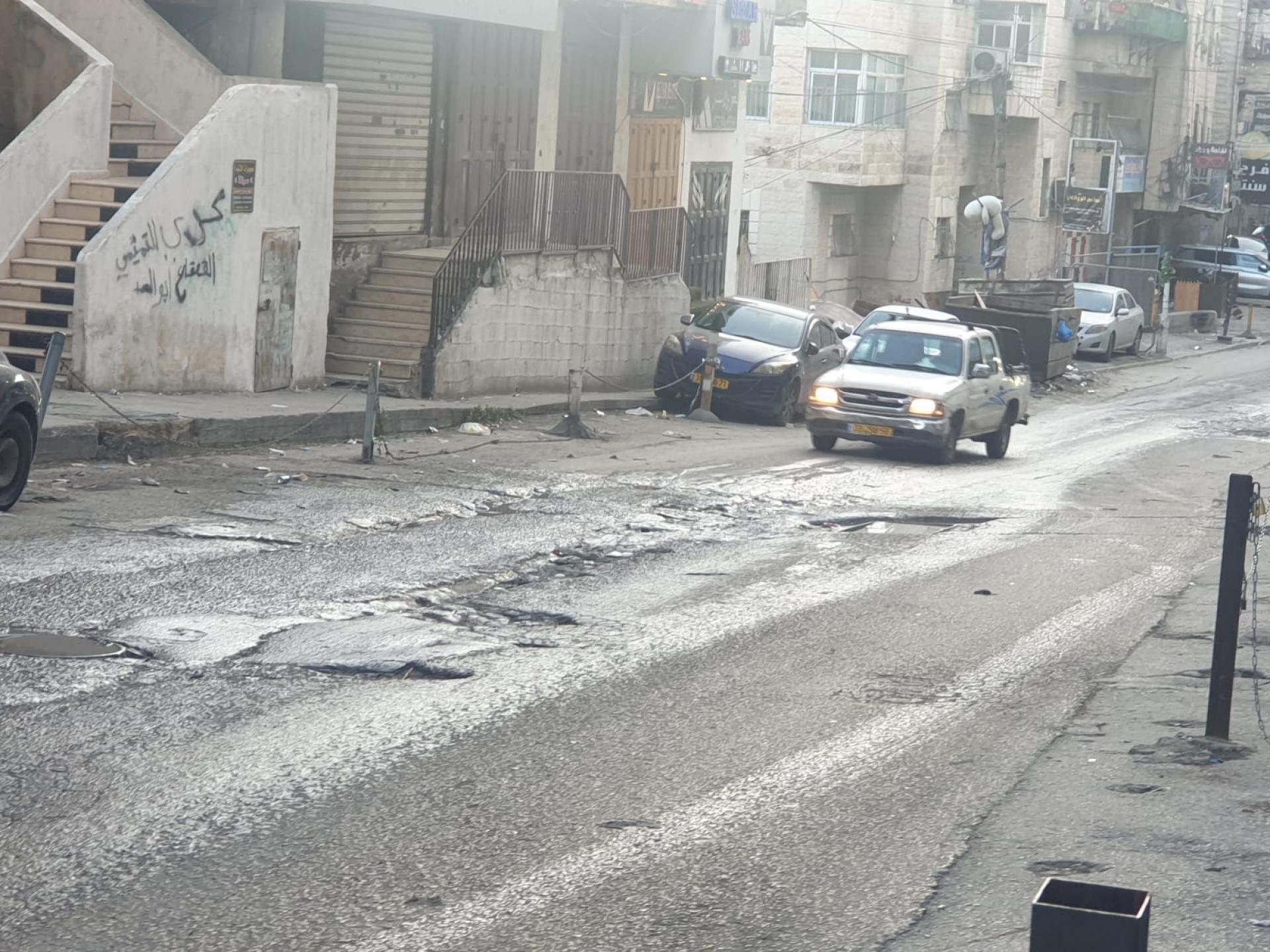 Shuafat Refugee camp – a road in the camp