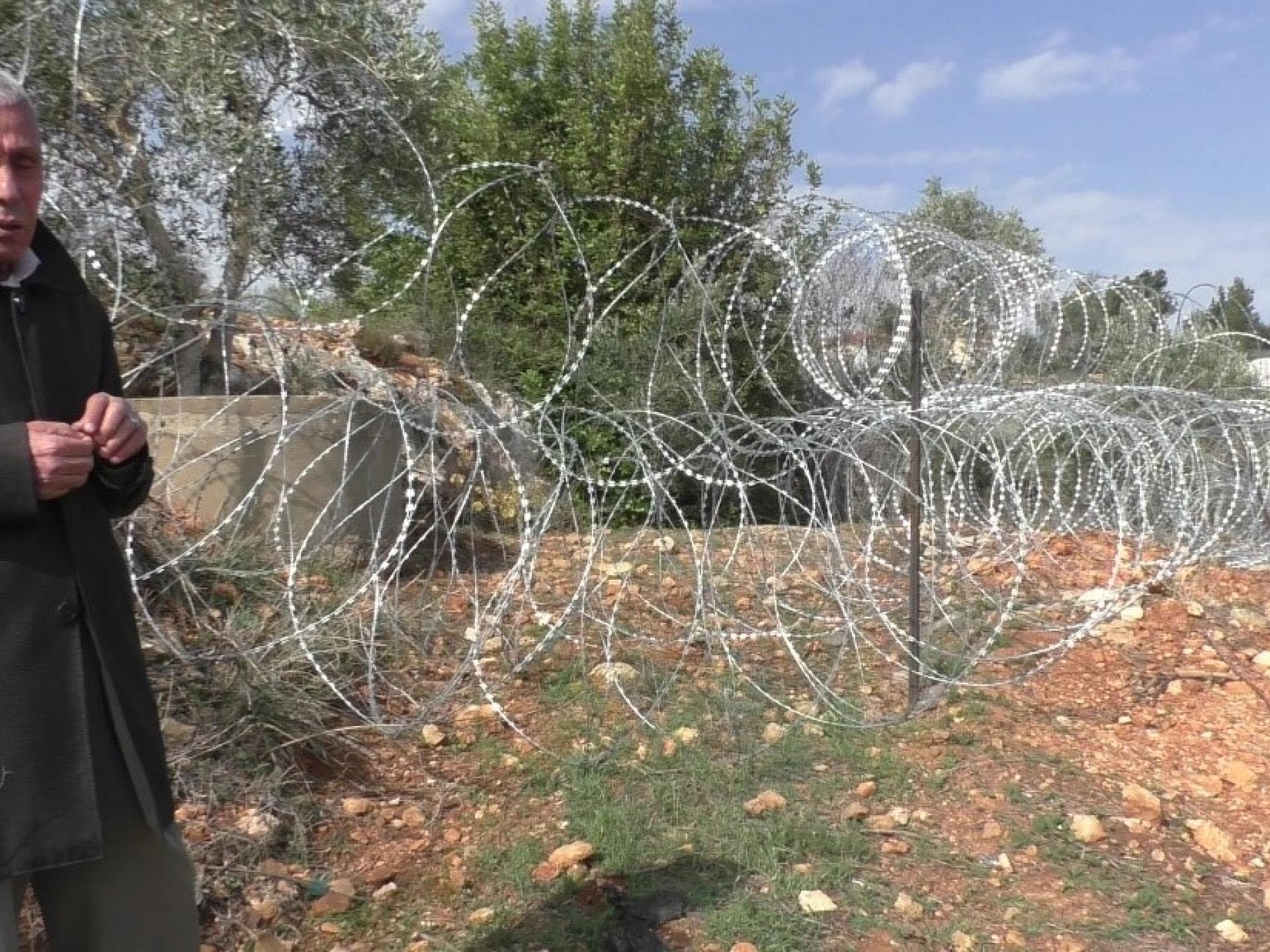 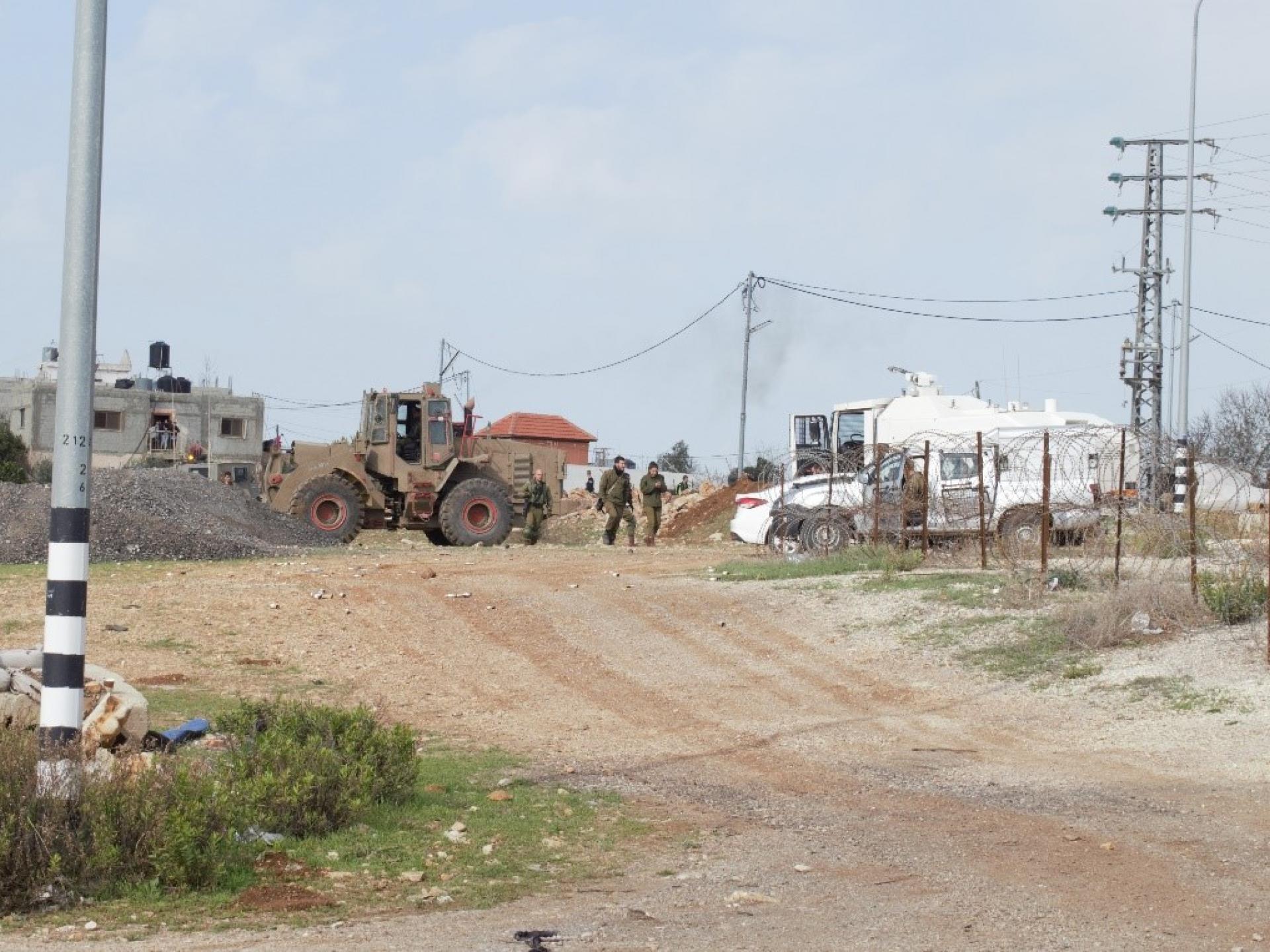 At the entrance to Nabi Salah village
Photo:
Nurit Poper

11:00 Planned meeting with Abu Husam at his Nabi Salah home

At an earlier meeting on December 27, 2017, Abu Husam disclosed his worries to us about a plot of 18 dunams with olive trees that belongs to him and to his brother, bordering on road 450. He heard that the plot of land had been fenced-in and wished to see it for himself, but was wary of going there in his own car.

In our previous visit four days earlier as we traveled with a vehicle of the Venetzia transport company, the driver was required to show his ID. Therefore this time we decided to use our private car. Advised by Attorney Neta Amar who has been looking after the file of opening the road, and who has worked tirelessly towards fulfilling Palestinians’ rights until the road be opened again, we coordinated our plan with Abu Husam to go to his land together. First we decided we would gtravel in two cars – we in ours, and Abu Husam inhis. Neta notified us that the road is officially open and that the soldiers, after briefly checking whoever looks Palestinian, let people through. A problem arises only when settler-colonists are present and take charge of the checkpoint. A lords of the land, they deny Palestinians access.

Abu Husam feared that the settler-colonists would recognize him as owner of the lands bordering on the settler-colony houses, but was determined to see his olive grove with his own eyes, so he preferred to ride with us.

This time we crossed the checkpoint at the Umm Safa Junction without being stopped, we were not suspected as Palestinians and the settler-colonists were not present at the time. Not far from the checkpoint is Abu Husam’s land, lying between the road and the houses of settler-colony Halamish, A new barbed wire spiral shines in the noontime sun, closing the plot of land entirely, passing close to the road that leads from the settler-colonist houses and to the other end, continuing uphill. We tried but realized that it is impossible to enter the olive grove.

Two months earlier Abu Husam received notification from the DCO that they are oblived to fence the area for the sake of the settler-colonists’ security. He was promised a gate with a key for him to enter and exit at his will. Today he reached his plot of land for the first tine since, and stood next to the fence where the gate was supposed to be. The land is fenced-in, I cannot enter!  he shouted. Before the murder at Halamish, the land was frequented freely by Palestinians. Since the murder, he has not been able to do so.

While we were standing next to the barbed wire fence, a car with Palestinian-license-plates drive by quickly, so at least at this time of day the road is open. Attorney Neta Amar’s efforts have been successful. Neta was helped by the abundant material she received from us: interviews we held with villagers of Nabi Salah and Beitillu, photographs and reports. A video we produced with very limited means, following the closing of the road, is on youtube.

At the entrance to Nabi Salah, next to the army post, unusual activity was noted, of military vehicles and soldiers. Piles of gray material were brought there in order to create a convenient surface for military vehicles. Children from Nabi Salah stood by and watched the soldiers and the bulldozer move the piles.