I brought two guests from New York with me to show them the separation barrier and the seam zone.  We first drove to the settlements of Sha’arei Tikva and Elkana and I explained what they were seeing.

Hani tells me on the phone the gate has opened for the olive harvest.  The hill of garbage north of the gate keeps growing, hiding the olive groves.  Hani says the landowners contacted the authorities as soon as their land began being used as a dump, and a number of times subsequently, but received no response. 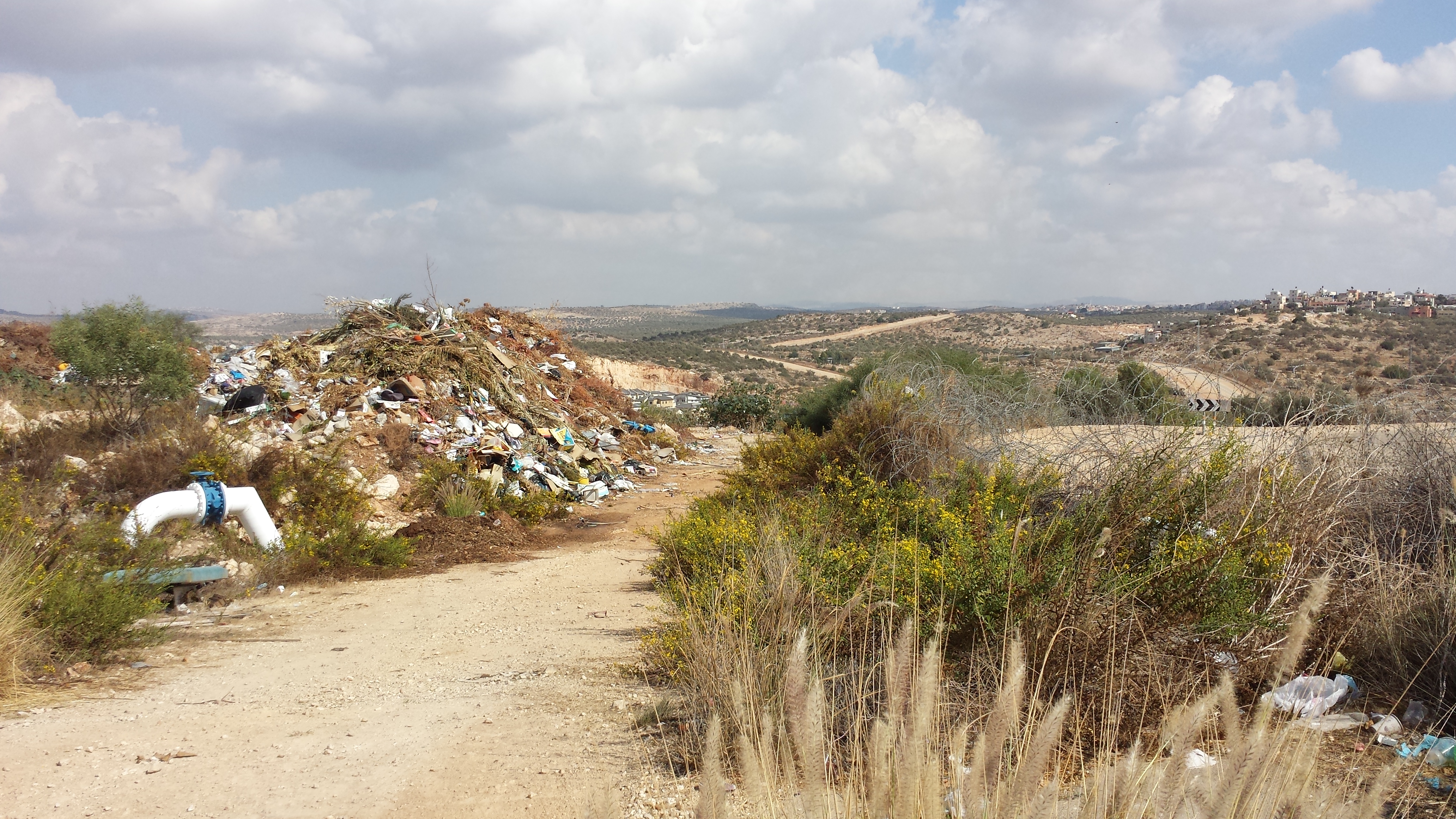 The photo is too pastoral.  The hill of garbage is worse than it appears.

The blocked gate in the wall is completely closed off, but the barrier that was placed between the barbed wire fence on our side and the gate has been removed, so the farmers returning to their homes in ‘Azzun ‘Atma can go through only on foot and must walk a few kilometers to the Abu Salman checkpoint on the security road, and then walk all the way back to their village.

We went through the Habla checkpoint just to show it and explain.

I stopped this time also to view the progress of the landscaping underway next to the checkpoint and the security company’s offices.  We also saw the kennel from which dogs are brought to rummage through cars belonging to Israeli Arabs coming into Israel.  Three cars were in the inspection area on the other side of the road.

The soldiers arrived after a few minutes, a tractor waiting on our side crossed and returned, a few people went through on foot, greeted us as usual, and got on the tractor.  Six more tractors went through pulling wagons loaded with sacks, crowded with men and women.  We continued to checkpoint 935.  All the farmland in the area that had been returned to Palestinians after the separation barrier was relocated is flourishing.  Each time we come we see more plots with young groves marked by stone boundaries.  It’s obvious that agriculture such as this is impossible on the other side of the fence and the few gates

that open only two or three times a day are no substitute for uninterrupted, daily access.

The gate opened a few minutes late.  Not many people and tractors go through in both directions.  In this season, most people return home towards evening.

We drove via Jayous back to Highway 55.  We went through the Ras a-Tira checkpoint in order to show the enclave and explain about the Supreme Court cases.  A brief tour of the Alfei Menashe settlement and of ‘Arab a-Ramadin (which reminded the guests of a Native American reservation), and back to Tel Aviv.

A village in the Salfit district. In 1983, the settlement of Sha'arei Tikva and Etz Efraim were established south of the village and in 1985, the Oranit settlement was established west of the village. The separation barrier that creates the enclave of the settlements of Etz Efraim Elkana and Sha'arei Tikva, which were built on Mlas'ha's land, cut it off from the north-neighboring village of  Sanniriya and from the main road to the north. The two agricultural checkpoints (1634 and 1549) for the passage to 5,000 dunams in the seamline zone are seasonal. Farmers complain that the army does not allow them to pass a water pipe needed for irrigation and especially for pest control spraying. "Hani's House" is a family house close to Elkana and separated from his village by a wall.