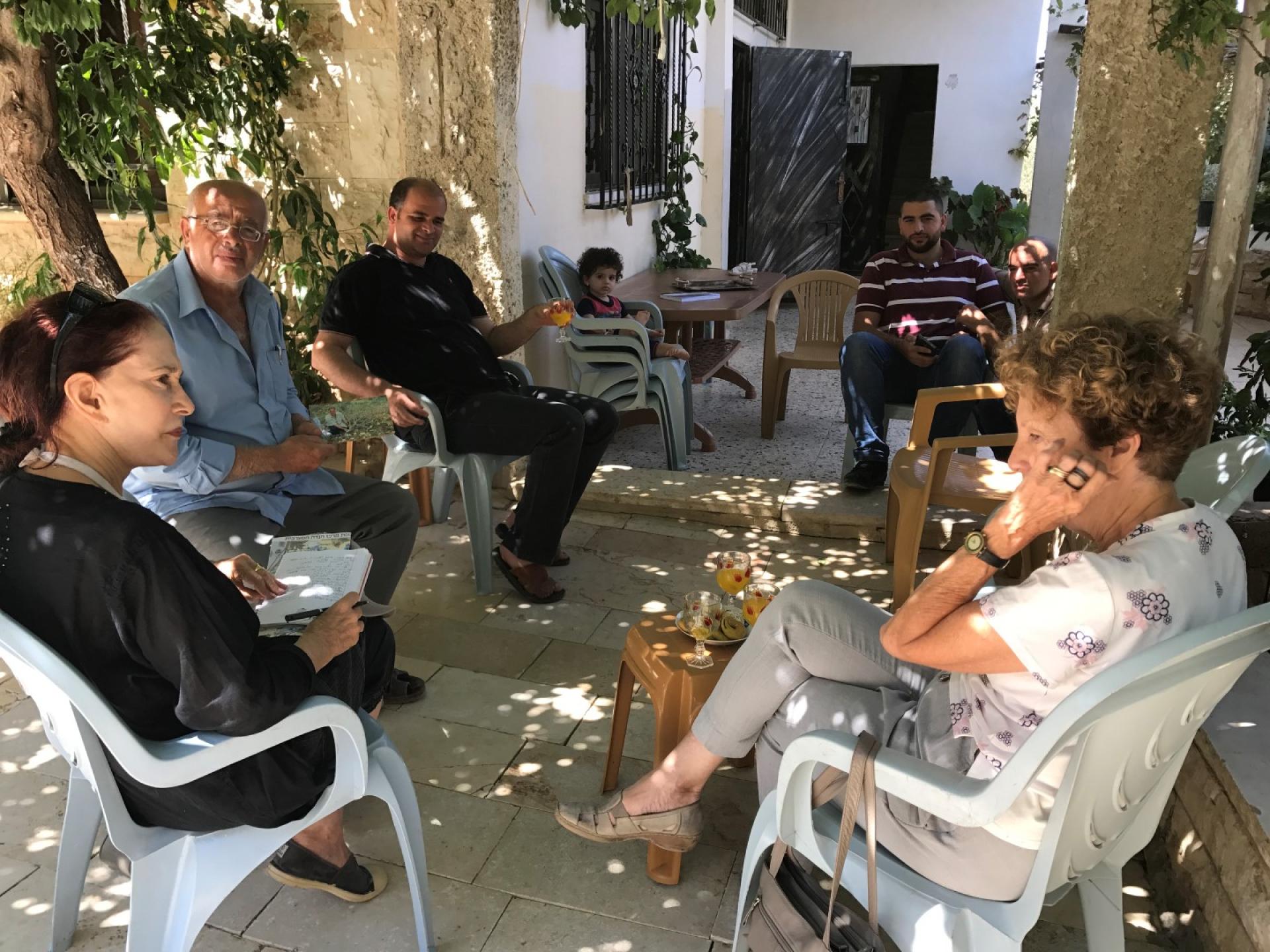 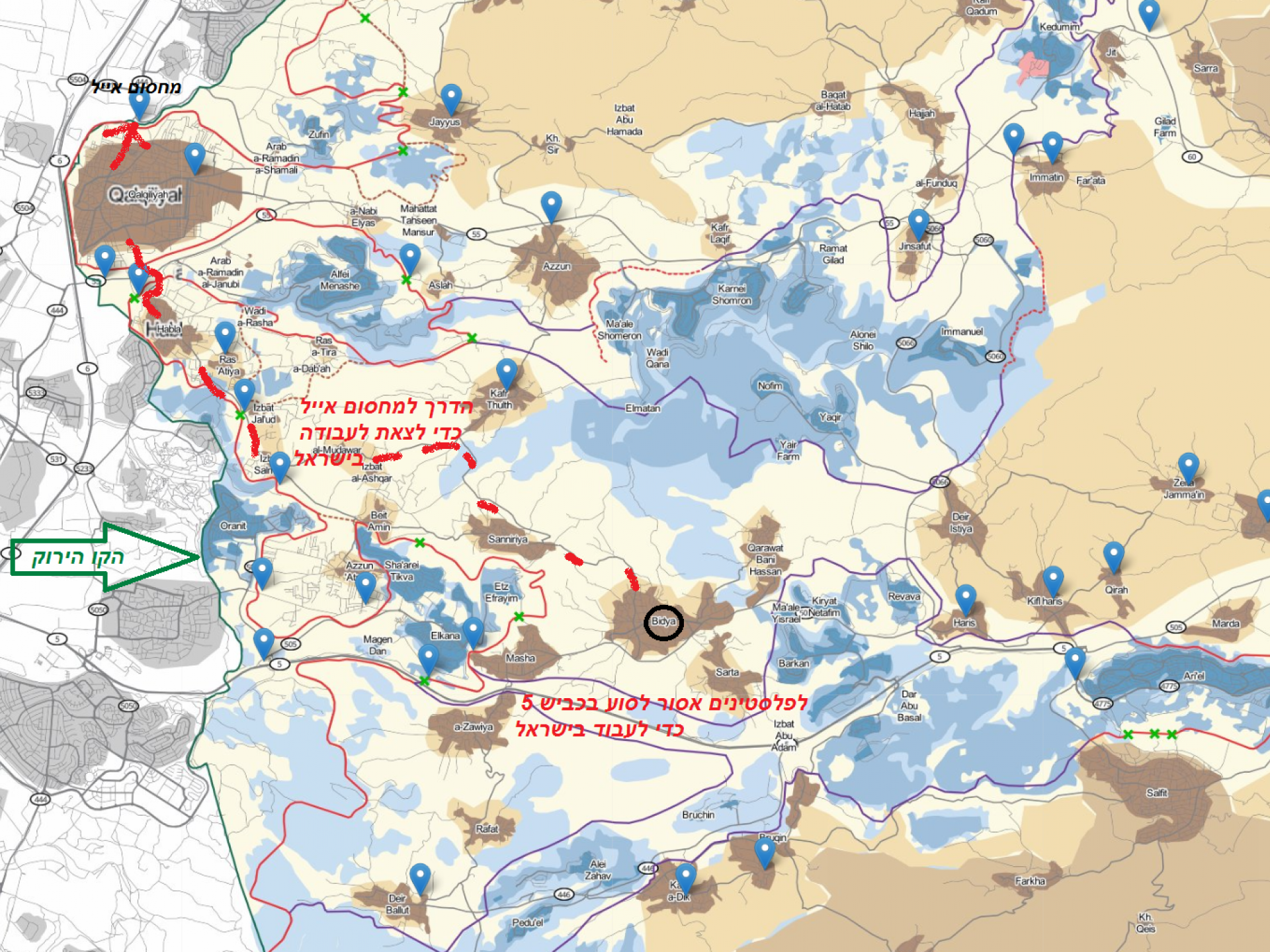 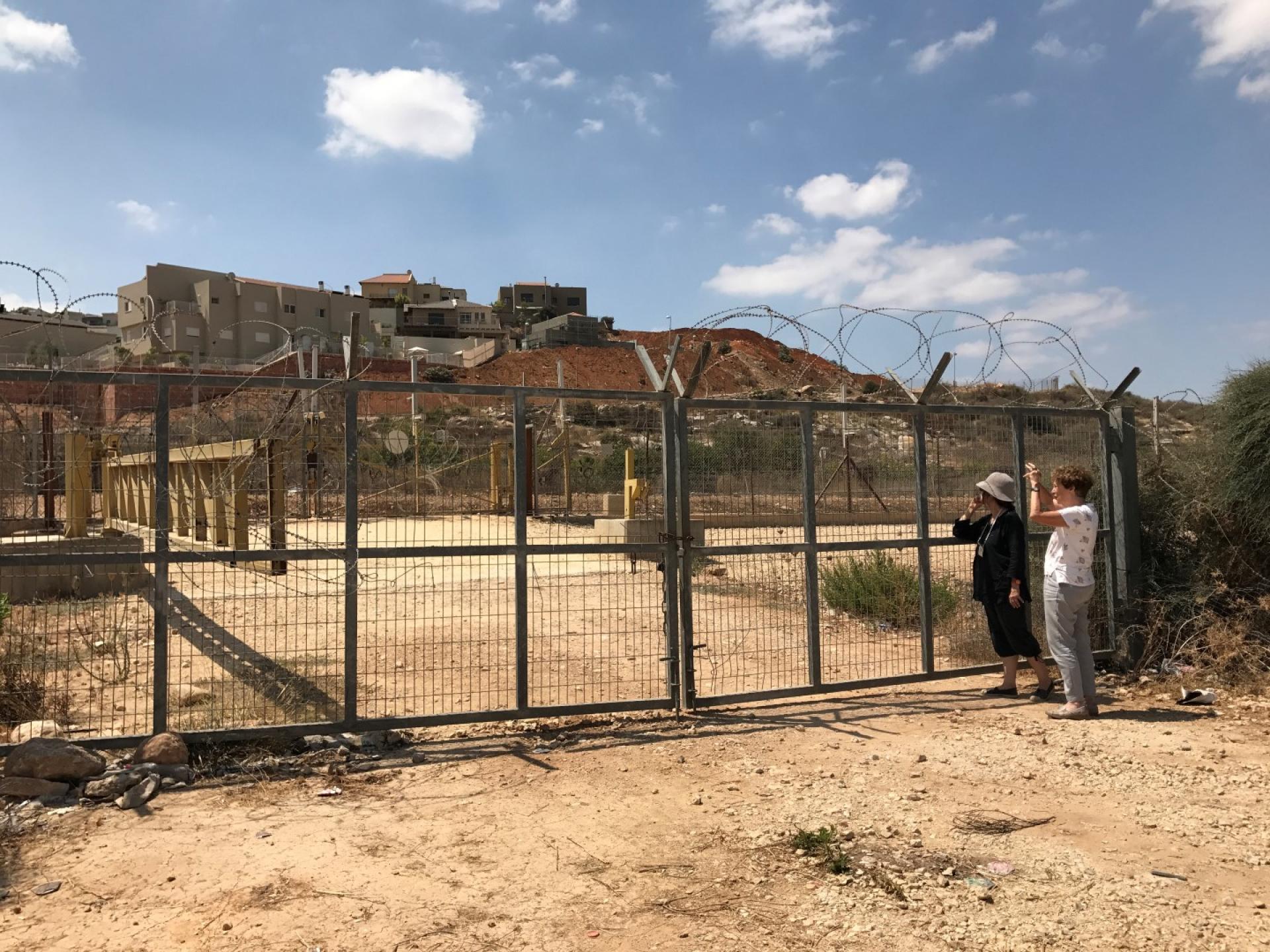 Beit Amin checkpoing and the villas of Oranit settelment in the background
Photo:
Vivi Konforty 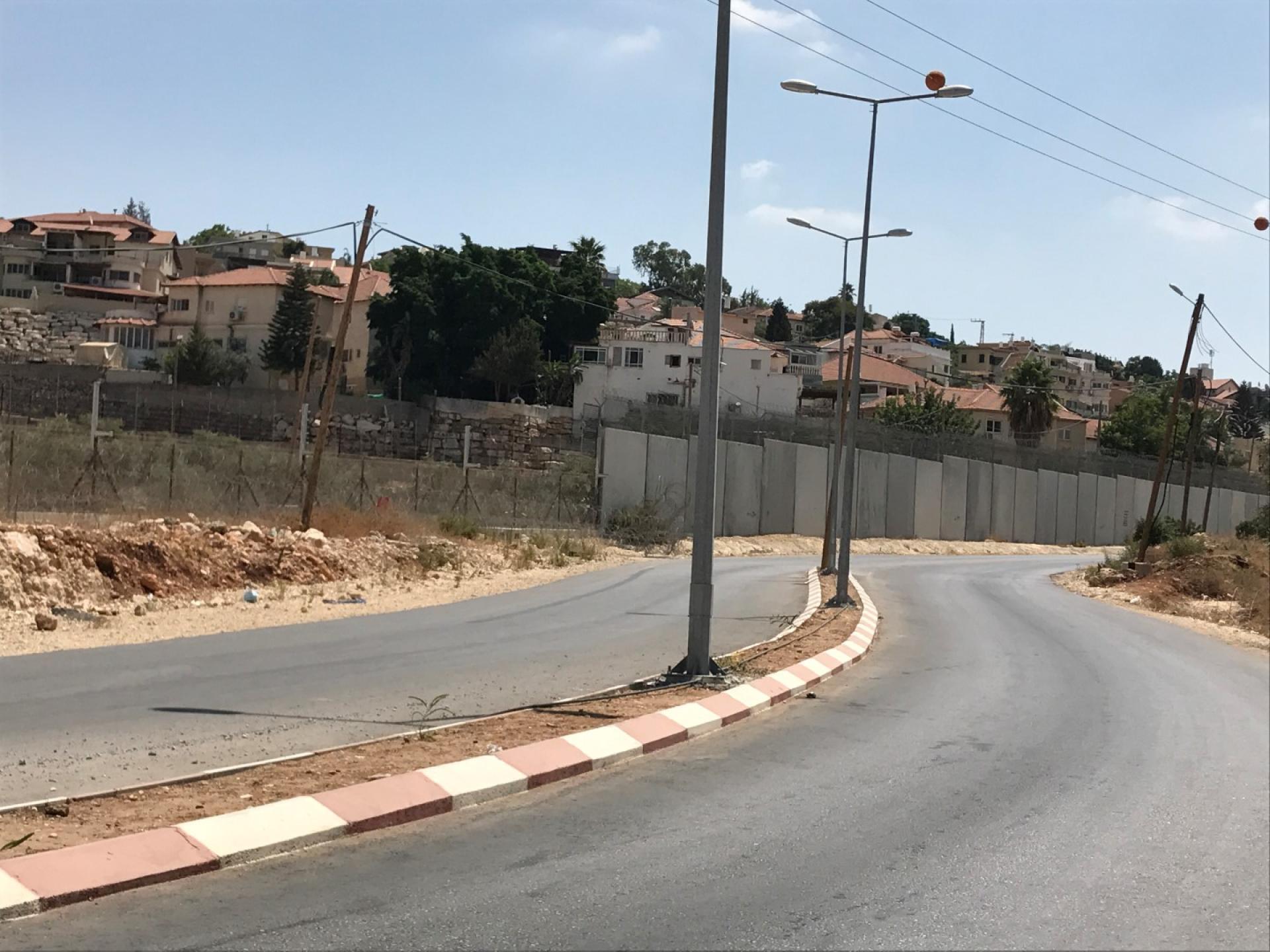 The eve of a holiday for Palestinians, lots of traffic, stores are crowded – Qalqiliya is festive.

Bidiya – We stop to talk at the grocery.  The owner calls Y., his father-in-law, who speaks Hebrew, to join the conversation.

Bidiya has 18,000 residents.  About 1,500 work in Israel, entering through the Eyal checkpoint.

The cross-Shomron highway (Highway 5) traverses the village’s land, and over the years attempts have been made to transfer ownership to the state.  They claim transfers were based on forged documents, not all of them drafted by Israel.  Documents were presented of a man said to have died who was subsequently seen going through the village.  Cases relating to the land thefts have been brought to court beginning in 1981 (corrupt Palestinians and Israelis cooperated in the forgeries that made the land thefts possible).  East of Elkana the settlement of Etz Efrayim is being built on lands belonging to Maskha and Bidiya.

Y. reports the army frequently comes to the village.  The soldiers enter homes at night, conduct searches, rummage through belongings and create a mess, also in Area A.

Mas'ha’s northern gate is seasonal, for the olive harvest.  Y. says there have been years it didn’t open at all during the harvest.  As the harvest approaches families apply for permits for all family members, but only the elderly receive them.  A single person, even if he’s healthy, isn’t able to harvest an entire grove.  This year they’ll submit applications next month, on October 1.  Each landowner will submit their own application to the Palestinian DCL, who will transmit it to the Israeli DCL which will issue the permit.

Y. speaks Hebrew, worked in Israel for many years as a plasterer and knows every town, but now he’s blacklisted because he assists villagers applying for permits and in complaints about land theft.  He’s well acquainted with Sylvia, from Machsom Watch, who deals with complaints about blacklisting, and who helps with the bureaucratic procedures when possible.  He’s been punished because of his activity and is not allowed through the agricultural checkpoint.  Even though he’s over 60 (according to the regime’s rules, people 60 and older don’t need a permit to go through the agricultural checkpoint).

Recently 500 dunums of land south of Bidiya, belonging to it and to Kafr A-Dik, were declared state land.  Itzik, from the Civil Administration, decided the lands aren’t agricultural, after olive trees on the land had been cut down.  It’s difficult to see and hear about this abuse and theft (see photos).

We’re invited to Y’s home.  His sons and daughters are there for the holiday and sit with us in the attractive courtyard.  All his sons went to university.  One is an engineer, the second an attorney and the third is studying medicine in Turkey.  All work in Bidiya and they’re all…blacklisted.  In 2014 Y. received an entry permit to Israel valid for one year.  In April, 2015, it was rescinded.  He asked why.  “You’re dangerous,” they told him.  They didn’t explain.  The family has many relatives in Israel but is unable to visit them.

The municipal offices in Bidiya and the other villages are closed for the holiday.  Lots of traffic, stores are crowded.

We continue to Beit Amin.

Checkpoint 1447, the Palestinian side.  The road to the checkpoint is unpaved, winding, passing through a tributary of Wadi Cana.  It was once necessary to try and avoid the sewage from Sha’arei Tikva that flowed through the wadi and whose overpowering stench filled the area.

Now it’s all dry.  In the background Oranit’s single-family homes abut the fence and the checkpoint, overlooking it from the hill.

We returned via the unpaved road to the main road to Beit Amin.  Sha’arei Tikva is to our right.  A new wall has replaced a portion of the fence along the road to ‘Azzun ‘Atma.  At the end of the wall the massive checkpoint stands out, to be used by the landowners only during the olive harvest.

We reach ‘Azzun via Thulth to stop at the shop, unload secondhand merchandise, and after stopping for falafel in Nabi Ilyas continue to Habla.  It won’t be long before the Nabi Ilyas bypass road opens, constructed on the olive groves belong to residents of ‘Azzun and Nabi Ilyas.  Additional land on both sides of the road will be graded and fenced to protect yet another road separating different categories of people (we mustn’t say apartheid).  We’ll wait and see.

A Palestinian from Qalqiliya recounts the difficulties going through Eliyahu checkpoint (109), run by a civilian security company.  Shimon was formerly in charge, now Itzik, both of them bad people, supercilious, harassing us.  Two years ago they shot a Palestinian schoolgirl, dressed in her school uniform, while A. stood beside her and asked them not to shoot.  These people are heartless.  They embitter our lives (his Hebrew is fluent, he refuses to identify himself).

14:05  The checkpoint is quiet.  This melancholy silence.

I couldn’t help thinking about what the silence conceals…

What would happen if farmers from some moshav were forced to behave according to a schedule set by the authorities and the guards’ whims: allowed/not allowed to transport a chair, a toaster or a ladder from home to their land, or someone who bought secondhand merchandise and wants to bring those poor goods home, where they’re valued – and is forbidden to do so.

From the checkpoint we went to visit A. at the plant nursery.  He’s full of stories, as usual:

A village in the Salfit district. In 1983, the settlement of Sha'arei Tikva and Etz Efraim were established south of the village and in 1985, the Oranit settlement was established west of the village. The separation barrier that creates the enclave of the settlements of Etz Efraim Elkana and Sha'arei Tikva, which were built on Mlas'ha's land, cut it off from the north-neighboring village of  Sanniriya and from the main road to the north. The two agricultural checkpoints (1634 and 1549) for the passage to 5,000 dunams in the seamline zone are seasonal. Farmers complain that the army does not allow them to pass a water pipe needed for irrigation and especially for pest control spraying. "Hani's House" is a family house close to Elkana and separated from his village by a wall.