Etzion DCL: The AC is not working, the cooler is not connected, the machine doesn't have paper and there is no one to talk to | Machsomwatch
Skip to main content
Back to reports search page

Etzion DCL: The AC is not working, the cooler is not connected, the machine doesn't have paper and there is no one to talk to 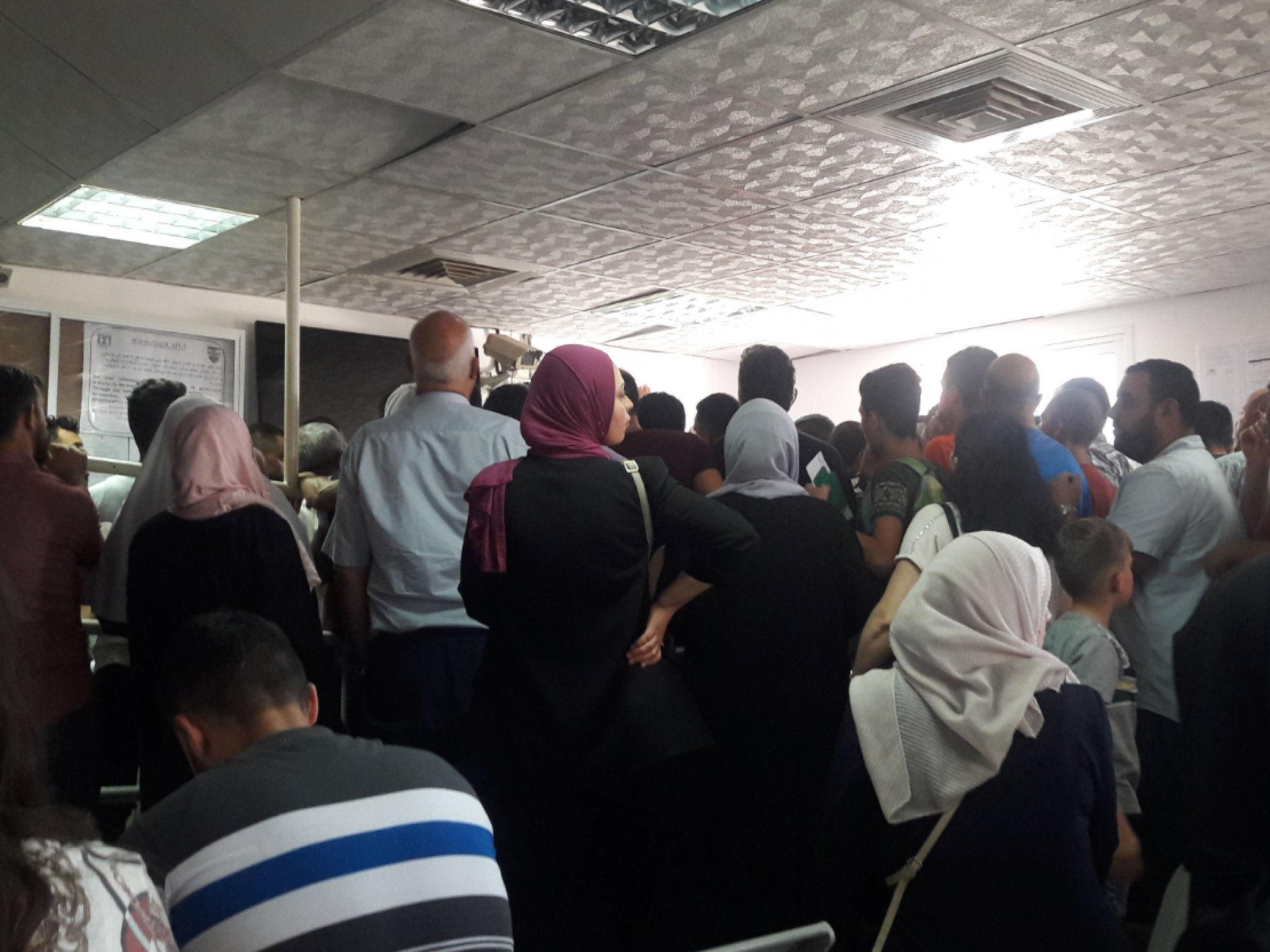 a lot of people crowded hoping to get some service 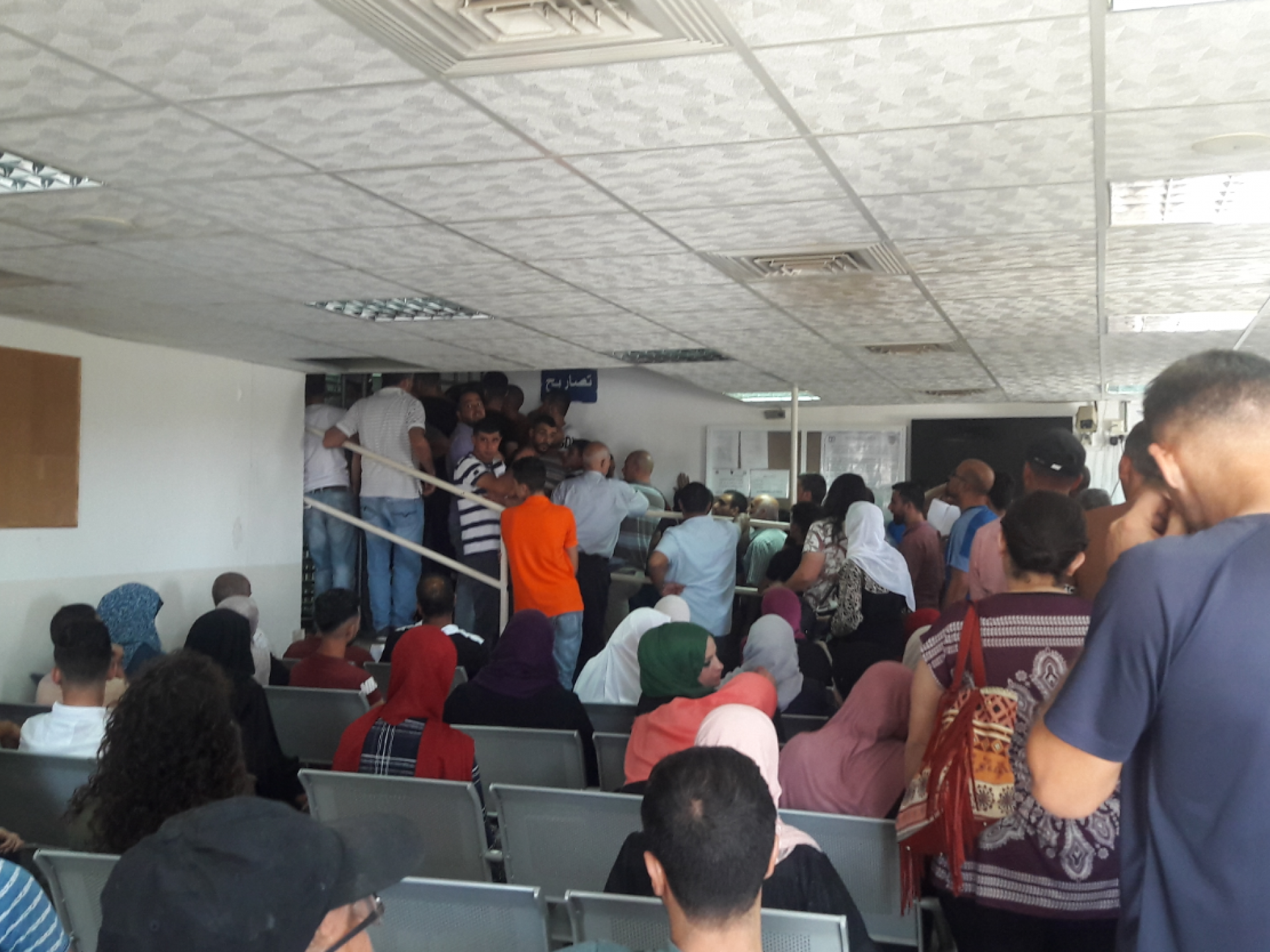 DCO Etzion: trying to get to the top of the stairs

The parking lot was full. Near the building itself were a few yellow taxis, and more cars in a second and third carpark. We couldn’t work out how they would manage to get out after finishing their affairs.  When we entered the building and saw the crowds there, and spoke with some people, we understood – they simply don’t go out because they don’t get service and thus don’t complete their business!

Inside, the air conditioning was not working, though this was one of the hottest days of the year. The cooler to dispense cold water was not attached to electricity.

Most of the people were waiting to renew magnetic cards. People told us that on Monday, too, there had been many people and because of some technical failure many were sent home and returned today. The machine on which people get their queue numbers was working, but had no paper to print the numbers.

The benches were full. People were also crowded on the steps leading to the turnstiles to enter the service center. For a long time no one was called to enter, while the soldier would tell the people to move away and threaten not to admit anyone at all if they did not do so. This didn’t help much.  After a long time people who had come for permits or to see the Police were called to enter. The others, who were waiting for magnetic cards, simply waited. We were told that inside there were very many people waiting for service.

Suddenly, coming out through the turnstile, appeared a woman officer and a soldier (we couldn’t see his rank). People explained to them that there was no paper in the machine and that they could hardly hear the loudspeaker to know what was happening. The soldiers told them to leave the steps, and went in through the turnstile. After a few minutes they returned with paper for the machine. At that point we ourselves were sitting in the hall and couldn’t see them past all the people. Also it was said after they returned that everyone who was waiting inside the service area was being sent out again.

And then, through the turnstiles, they did start to pour out. The waiting-room became even more packed and people had to escape outdoors. How could so many people have been inside? So the seats were all full, people crowded on the steps, and the entrance, and around the soldiers who were dealing with the numbers machine. No one knew what was happening. After many minutes, when the soldiers had once again gone inside, they began to call out names, one at a time, of people to enter through the turnstile.  In the hall itself it was impossible to hear the names, but the men waiting at the turnstiles would shout out the names while others would try to find the correct person – who might well be outside the building at that stage! [One might suggest that if they would call out queue numbers, it would help people know more or less when they were likely to be called.]

Now that service had been renewed, we felt it was time to leave.  It was obvious, though, that not everyone would manage to get service today before closing time.

While inside, various people turned to us for information and help, mostly about permit-refusal. We gave them instructions for contacting Sylvia’s team or, if relevant, Hamis in Hebron. On our way out to the car someone stopped us to ask a question and immediately we were surrounded by  more and more people. Fortunately we still had a supply of the tags with the phone and fax numbers which we could distribute. It was quite a while before we could actually leave to reach the car. We hope Sylvia’s team will be able to help in cancelling their entry-bans for at least some of these folk