‘Azzun.  We went to the municipality.

Following up on Rachel’s report from Sunday we wanted to obtain more information about what the army has done in recent days, and on Saturday night in particular.

During each evening and night since this past Wednesday between 10-15 jeeps have entered ‘Azzun after blocking all the entries to the town and made a huge noise.

Saturday night residents of ‘Azzun were sitting in a café watching the soccer game being played by Spain’s national team.  The soldiers, in a long column of jeeps, fired tear gas grenades and the whole area filled with a dense, poisonous smoke.  The smoke and unpleasant odor were felt everywhere.  Residents quickly closed windows and stayed inside.  The soldiers approached the café in the center of ‘Azzun, broke chairs and tables and drove over the legs of two men, one 25 years old and the other age 45.

The two were injured and were immediately brought by ambulance to the Qalqilya hospital where they’re still hospitalized.  A number of shops had their windows broken and the security cameras on their facades damaged.

Yesh Din, the Palestinian DCL and the Red Cross were notified.  The Red Cross contacted the army which responded that nothing occurred that night in ‘Azzun.

The shopkeepers repaired the windows that same night to prevent theft.

We wanted to speak to people who’d witnessed what occurred but were told everyone was afraid to talk.

Despite the thick smoke, some of those present managed to photograph and posted the photos on ‘Azzun’s Facebook page.  None dared post photos on their own WhatApp account because of fear the army was following it.

13:25  Habla.  The checkpoint is open.  Everyone arriving goes through.

The owner of the flock that for months has been grazing in the field behind the plant nurseries stops beside us. 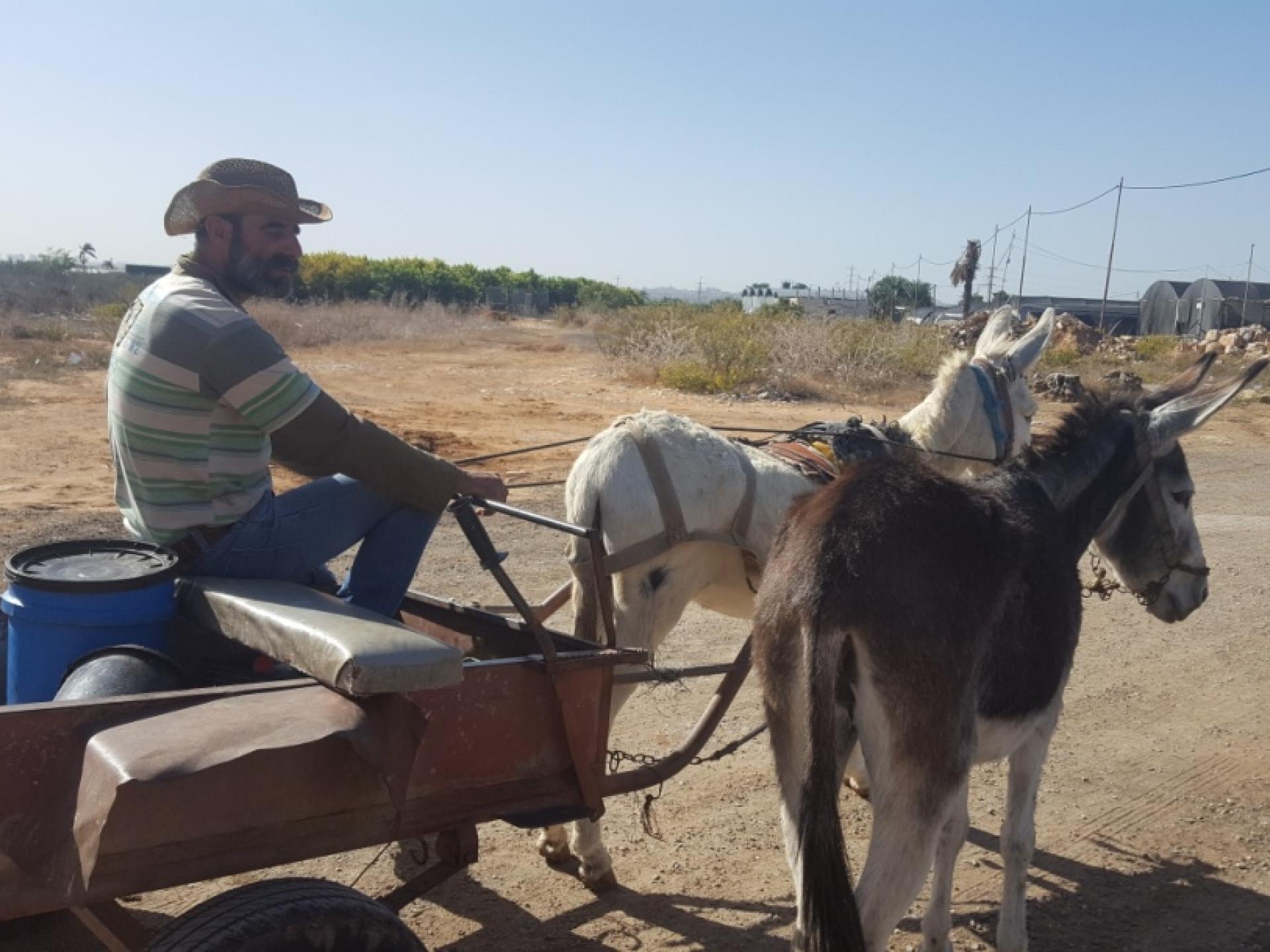 Our friend, the owner of the herd
Photographer:
Shoshi I

He has no permit to enter the herd to Habla.  We give him the phone number of the Moked for the Defense of the Individual in Jerusalem.

We decided to determine whether Oranit checkpoint opened as specified on the list we were given.  Checkpoint 1474 is closed.  A Palestinian we met told us that at the start of the olive harvest the checkpoint opened for 2-3 days but has been closed since.

The security guard at Eliyahu checkpoint stops us.

What’s up?  Where were you?  What organization do you belong to? (Us?  An organization?  Of course not.  We simply enjoy seeing the country…)  Let me see your IDs.  Open the trunk.  He inspects, looks around, returns our IDs and raises the checkpoint barrier.

It is one of the crossings in the Separation Fence, south of Qalqiliya. Its former name was The Fruit Checkpoint.