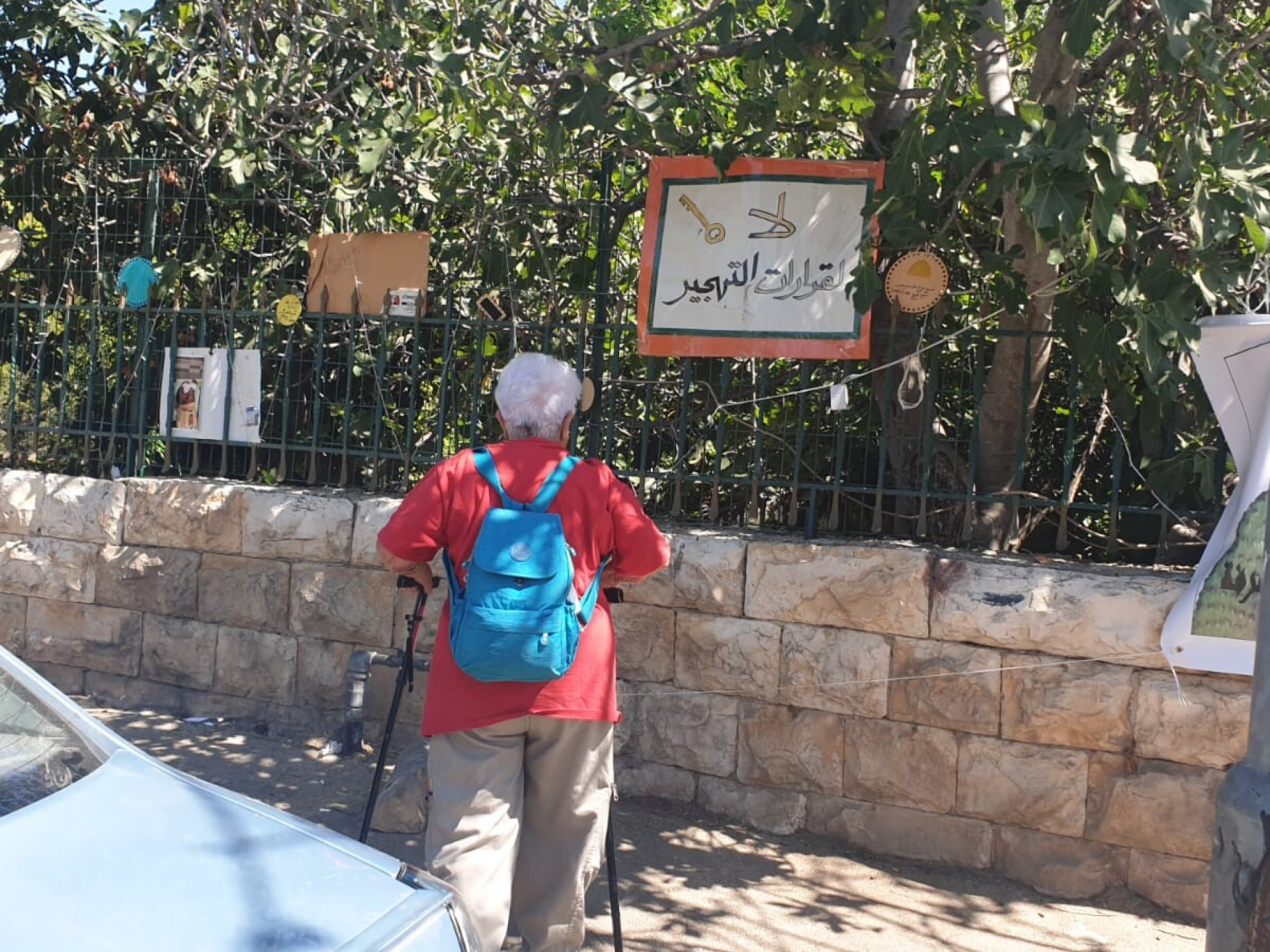 In Sheikh Jarrah: "no to the expulsion decisions "

A comprehensive shift after a long absence. New checkpoints have sprung up in Issawiya and Sheikh Jarrah. In Issawiya, buses and vehicles stop, check passengers' IDs, sometimes on a tablet computer, and drop some people off for more comprehensive checks. Sometimes fines. There are also surprise checkpoints (Al Azaria and Sheikh Jarrah) where certain vehicles stop (not randomly but according to the impression of the Border Police at the scene, it seems) - check tablets through a tablet, ask questions - make life difficult for Palestinians living in Jerusalem.

At the Mazmuriya (the checkpoint leads from Tekoa and west of Gush Etzion to Jerusalem) only cars with blue certificates pass and traffic flows without delays. We asked the Border Police if anything had changed in the procedures - after an urgent conversation with his commander on the phone, it turned out to be a security secret ... The road from there to the container checkpoint is long and winding on one route (the only Palestinian road from Bethlehem crazy ascent, breathtaking view, but much smoke from the exhausts of the struggling cars .There is also a traffic jam on the ascent, although when we arrive, it turns out that the soldiers are only standing on the side of the exit to the West Bank, not on the side of the entrance to Israel. Later it turns out that the tests are done at the exit from Al Ezaria in the square from which there is an entrance to Ma'ale Adumim

At the checkpoint at the exit to French Hill, a beautiful female soldier and two border guards are standing. Every 2 minutes or so, a bus stops and two of them go  in to check on all passengers and also vehicles. In general, there are a large number of border guards at the Jerusalem checkpoints, most of them appear convinced of that what they are doing is for the good of the country ... When a car is stopped, a blue policeman emerges and checks the validity of a license and a test. If something's wrong the unfortunate gets a report. We were a witness to an employee at a nursing home,who was taken off the  the bus even though his work permit was valid. On a tablet it was not so. This often happens. The bus did not wait and left. The man got angry and told one of the soldiers that he knew he knew him, saw him every day. Shouts started but in the end everyone calmed down and the man climbed on foot.

We learned from the newspaper that under pressure from Mayor Leon, a new master plan for the Issawiya neighborhood was approved, which would make it possible to regulate the legality of most of the buildings built without a permit in the neighborhood. But its boundaries were limited by the "Slopes of Mount Scopus" National Park announced a few years ago.

We counted 5 checkpoints that border the small neighborhood of Sheikh Jarrah in the east and do not allow non-residents  to enter. We were told in advance that only the locals and religious Jews who visit the tomb of Shimon the Righteous pass through them and also Jews wishing to visit those who have taken a home over. But it is very true when we say that a few streets in the neighborhood have been turned into a ghetto for the Palestinians who have lived there before the religious Jews.  We as a human rights organization and a Japanese reporter who came after us were allowed to enter; An ultra-Orthodox young man was riding an electric bicycle on the neighborhood roads - just looking curious. Residents are not seen outside the homes at this time. Some are built in the traditional format of a garden and a stone structure and an iron gate with a peephole into the threatened paradise. In addition to signs protesting the deportation, and graffiti of all kinds, we saw a small courtyard library of books in Arabic, and a window of a house protected by shoes, probably against throwing all sorts of objects inside. A settlers' house with flags and other symbols of nationality looks like a foreign and ugly plant

On the main road leading to the center of Sheikh Jarrah, there is a Border Police vehicle, and its soldiers stop anyone who wants to and check them for whatever reason . I filmed a video of two young men on mopeds who had  been stopped - one a teenage pizza courier, the other a student. When I asked the student if he had attended any recent demonstration or gathering, he answered me cynically: "Sure, I'm in riots all day," adding: "There's nothing to do, in a few more years everyone will be Jews here ... ". Buses, passers-by and cars also stopped. I assume that throughout Jerusalem there are now more such "pleasant" corners for the Palestinians to examine in order to establish "law and order."

situated on the Wall route as part of "Jerusalem Envelope," in its southeastern stretch, east of Zur Baher, Um Tuba and the small Nuaman Village, on  Beit Sahur road, the checkpoint will serve as the main crossing for commercial goods from the southern West Bank to Jerusalem.

Abu Dis, Wadi Naar, Tuesday, May 17th, 2011 p.m.
Observers: Chana G., Julia W., Rahel W. reporting
Traffic moved quickly and without incident at Wadi Naar.
However, there have been several changes in traffic conditions which could affect our teams.
The road from Qedar to Wadi Naar is marked as one way -- in the direction from Wadi Naar to Qedar.  (We travelled this road, against the arrows without incident, but this could change).
At the Wadi Naar intersection, there are new signs pointing to Ramallah and Abu Dis from Wadi Naar toward the Qedar intersection.  However, the road was blocked!!! so the signs indicated travel that could not happen.
Also, the road from Wadi Naar toward Azariah had a new sign indicating that traffic was allowed only from Azariah toward Wadi Naar.  (Vehicles continued to travel in both directions while we were there).
Finally, a new building has been under construction south of the checkpoint.  Perhaps this will become a permanent crossing area like A Zeitun and Qalandiya, even though this would be constructed right in the middle of two Palestinian areas.  Who knows?
There was a large group of workers returning when we were there and vans lined up to take them to their destinations.
Once again, a quiet, uneventful shift.

At exit from Al Ezariya, before square leading to Maale Adumim. Mobile checkpoint (jeep and Border Police) operating till 09:00 am, facilitating traffic exiting Maale Adumin on three kilometer strip of road, also permissible for Palestinian vehicles. A similar checkpoint in the opposite direction, on road between Mishor Adumim and Adumim Junction. This checkpoint facilitates settler traffic on the Jerusalem-Jericho-Rift Valley road.

View the full album
Wadi Nar Checkpoint ("Container", "The Kiosk") - a barrier for vehicles in Area B that is regularly manned - east of Abu Dis between Sawahra A Sharqiya and Bethlehem and its daughters. Controls Palestinian movement between the north and south West-Bank. Includes driving routes, access roads, spikes, traffic lights and signs. There is no pedestrian crossing. Open 24 hours a day with random checks enhanced on security alerts. The checkpoint is in Palestinian territory, allowing for separation between the north and the south Palestinian areas when necessary.

In 2015, the leading road from Azaria to Bethlehem was renovated, as well as the steep and narrow ascent to the Wadi Nar checkpoint, which was dangerously travelled in both directions! The temporary checkpoint was renovated and expanded, and pedestrian traffic was banned. From 2016, traffic travelling from the south bank to Azaria was directed to a one-way road near the Southern Keydar Jewish settlement.