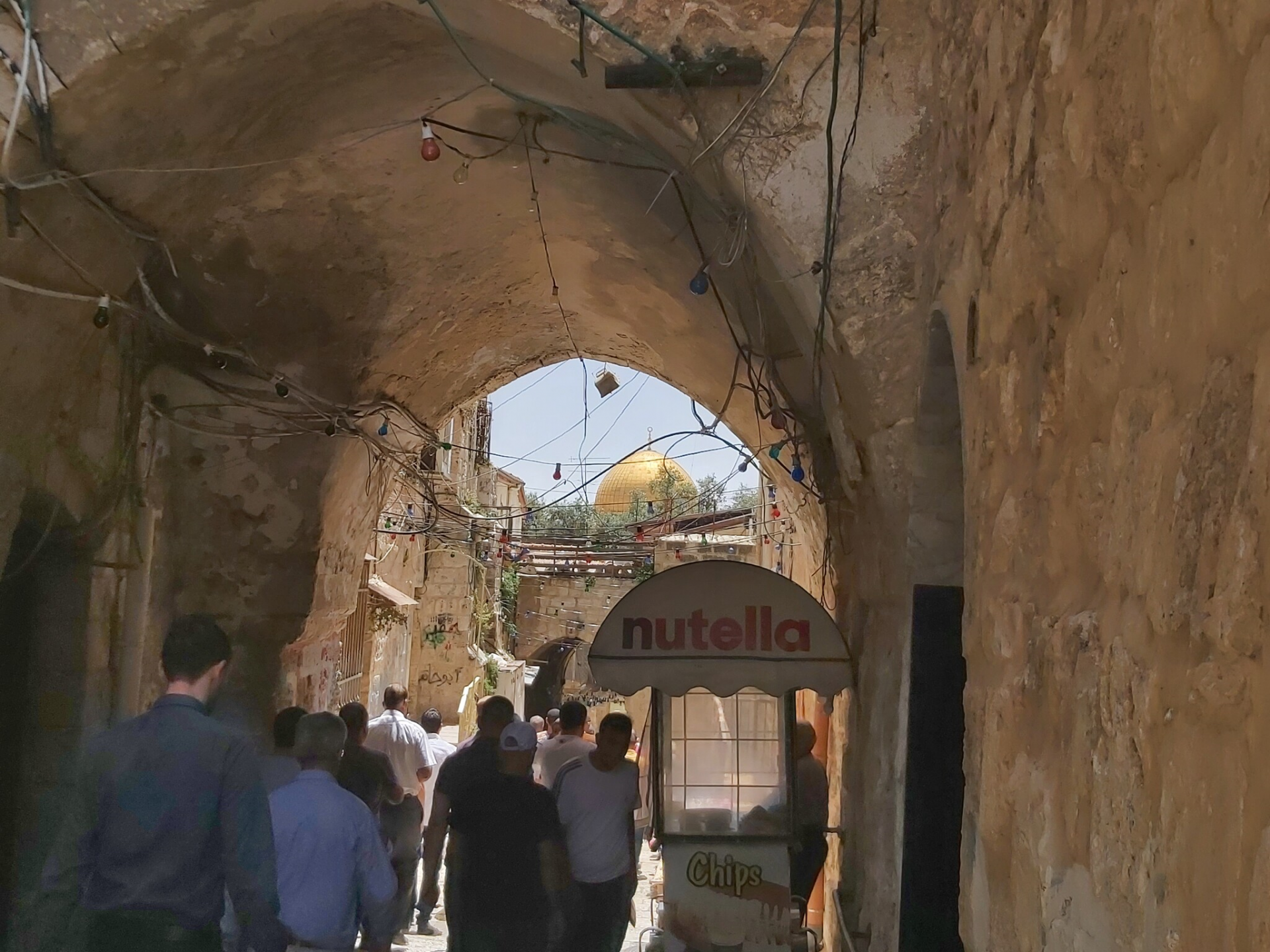 The golden dome on the way to Bab Hutta 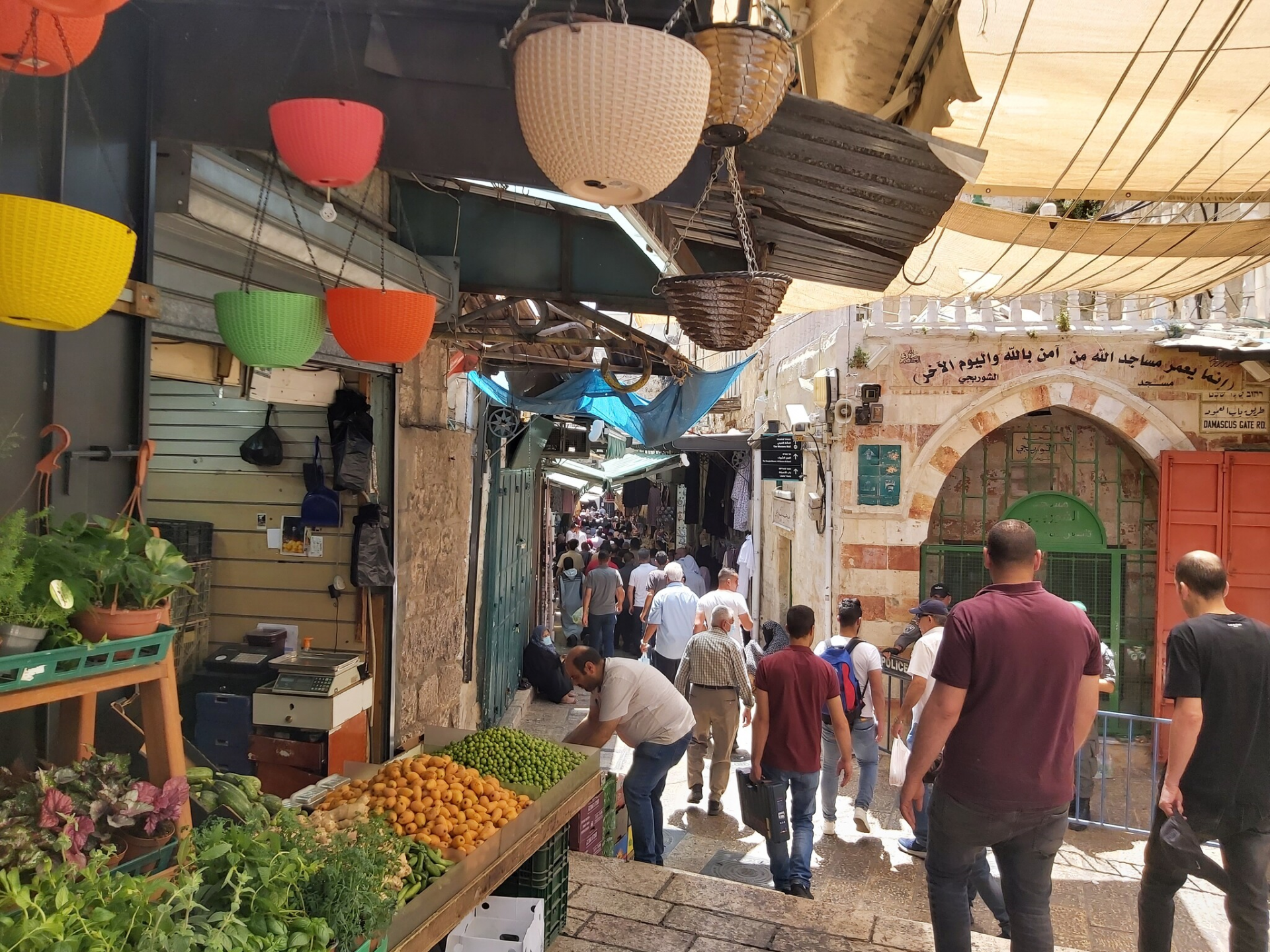 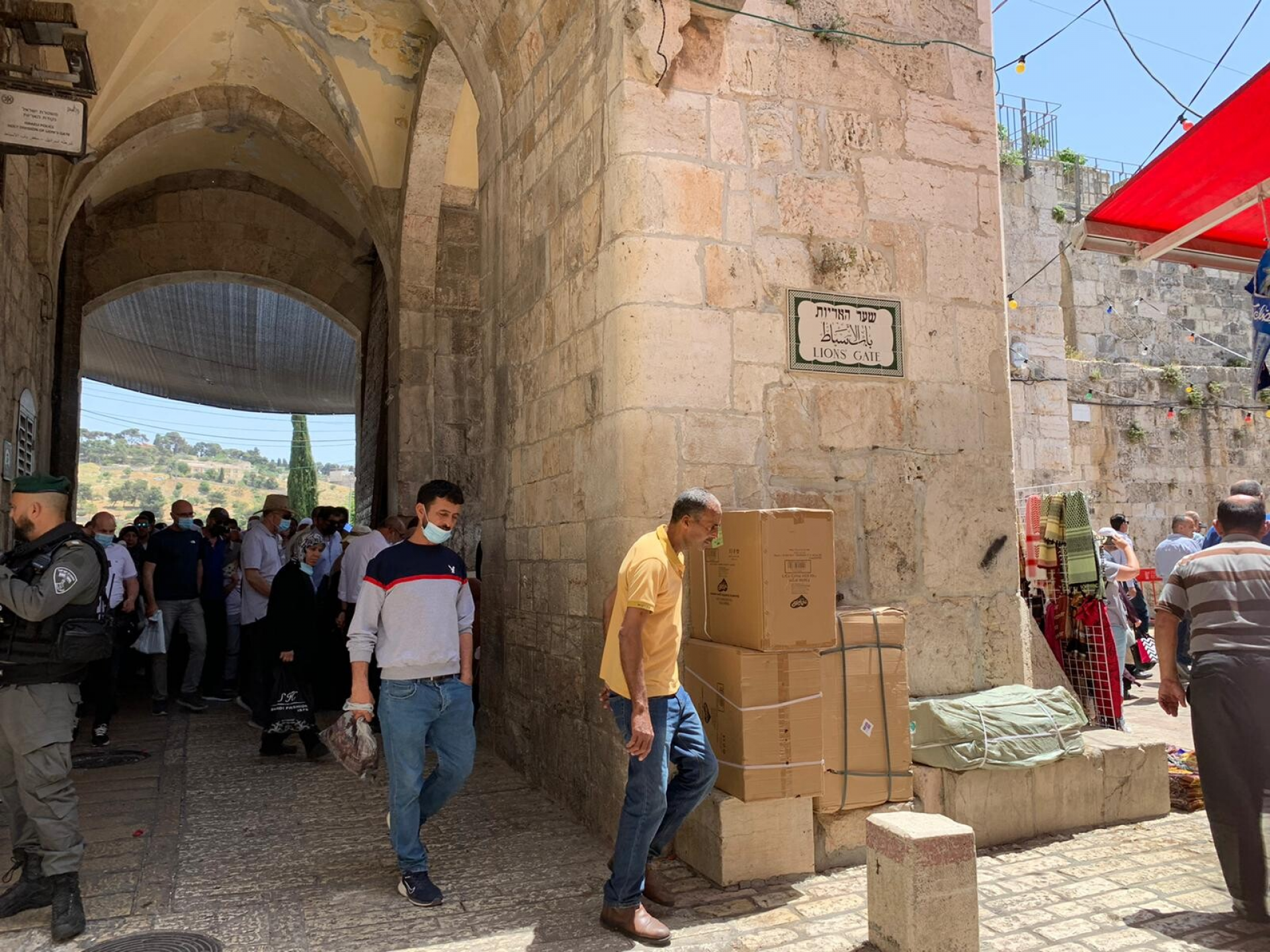 We met at 11:30 at the light rail stop, and headed for the Old City. The day was extremely hot. The entrance to the Damascus Gate is blocked by police barriers. Jews are not allowed in at this time, usually. We explained that we were MachsomWatch and come during the Ramadan every year to monitor the goings-on. A Border Policeman said he knows who we are and appreciates our activity (!), but must get confirmation from his superiors to enable us to enter. The officer in charge happened to arrive just in time, saw our tags and let us in.

In recent years the Damascus Gate has become a fortress. Large security posts have been constructed on both sides of the descending steps towards the gate, and near the gate as well. Naturally, everything is surrounded with security cameras, as inside the Old City. The small number of people surprised us – apparently because of the restrictions imposed on Palestinians from the West Bank. There are already some vendors selling food and other things, as well as beggars, since charity during Ramadan is a religious obligation.

Israeli ‘security’ forces are obviously present in great numbers, especially policemen and Border Police. However, all was quiet and everywhere we went we remained idle…

We entered through the Damascus Gate. All shops were open and putting out stalls, selling various types of food (sweets, vegetables and fruit and more) as well as prayer rugs, chairs, telephones and associated accessories, clothing, bric-a-brac etc. For the moment customers are few, usually buying more on their way home from prayers.

A ways after the gate the route divides. Turning right one arrives inside the market, the continuing part of the Via Dolorosa and Muristan, as well as the Church of the Holy Sepulcher which is located in the Christian Quarter (we are still in the Muslim Quarter). Turning left to Ha-Gai Street one reaches the entrances to Temple Mount through the praying Muslims reach the mosques. Naturally we turned left with them. The streets are filled with lighting fixtures, colored lamps etc. One should get here in the dark hours in order to see them all alight, it must be very beautiful.

Near the Austrian hospice we turned towards the Via Dolorosa to reach St. Stephen's (Lions) Gate. The people on their way to prayer continue straight ahead to enter the gates

close to the Haram Al-Sharif gates (Temple Mount). On the way, where there are hardly any people (mostly shops with Christian souvenirs) we stop for a drink and wonder how the Muslims hang onto their fast in such heat.

We reached Lions Gate, passed the stream of people arriving from to continue into the holy compound from the gate near Antonia. We would return there later through Flowers Gate. Here at Lions Gate many enter. They immediately turn left to Al-Ghazali Square and enter the compound through the nearby gate, Tribes Gate. It is very crowded now. We had a hard time walking in the opposite direction and exiting through Lions Gate.

We walked on the pedestrian track northward along the wall, as many people moved in the opposite direction to prayer. The track itself is full of food and other stalls. Here too there are not very many customers at this time. Most of the shopping will be done on the way back. At the end of the wall, we turned into Sultan Suliman Street towards Flowers Gate. Here too we enjoyed the nearly empty part of the way in order to stop in the shade and have a drink.

At Flowers Gate an unceasing stream of people arrives in buses that unload in Salah Al Din Street, and enter the Old City through Huta Gate. In the past we used to stand for a while at the junction of Huta Gate and Via Dolorosa. Policemen and ushers would stand here in the past, and by placing fences separate passage for men and women. And naturally prevent passage from non-Muslims. This time they stand further in. The hour of prayer is near so the stream of people on their way gets thinner. Thus, we turned west on the Via Dolorosa, back towards the Damascus Gate.

During the prayer we entered the charming café at the Austrian Hospice, to refresh ourselves. It was so hot that we preferred to sit inside and enjoy the air conditioning rather than the place’s beautiful garden. From there one can overlook the street along which the Muslims walk to Temple Mount, and where Christian processions take place along the Via Dolorosa on Fridays and especially on Christian holidays.

We spent too much time at the nice café so when we came down the prayer was already over and everyone was on their way back. Crowding was extreme, in fact people walked tightly, proceeding very slowly. For this crowding we wore our face masks in spite of being in the open air. Occasionally someone would cry out “Pray to the Prophet Mohammad” and everyone would murmur verses in response.

Coming out, we took pictures again of the steps of Damascus Gate which in recent years have become a fortress. On the Eastern security post memorial plaques were placed for the late Border Policewomen Hadar Cohen and Hadas Malka who were murdered there on two different occasions several years ago. These incidents were among the reasons for ‘fortifying’ the place. Apparently, the Jerusalem Municipality decided to name these steps in their memory. I can understand the memorial plaques, but calling the steps after them appears to me another provocation against Palestinians. (Photo: Avital)

At least while we were there, everything went quietly, with no confrontations with the occupation forces. Hopefully this will continue.