Khirbet Tana—back to the Stone Age

MAIN POINTS: Beit Furik is a small town near Nablus. The settlement Itamar and its settler outposts are a source of worry and anxiety for the people here. The land for Itamar and the outposts was seized from the Palestinian towns and villages in the area. The shepherd community Khirbet Tana faces more acute problems. Their area was declared a ‘military zone’, and they struggle for their continued existence.

This report is consistent with Gideon Levy’s and Alex Lebak’s last Haaretz article, and this month’s B’tselem’s Report; some data is retrieved from The Applied Research Institute – Jerusalem.[1]

Beit Furik: We spoke with A., the Council secretary. Beit Furik is a small town, in a valley east of Nablus. On the southern ridge overlooking the town is the settlement Itamar. On hills, on both sides of Itamar, at a distance of 3 to 6 kms are settler outposts. The land for the settlement and these outposts was taken by force from Beit Furik, Rujeib, Awarta and Yanun. The outposts now form a barrier, around these Palestinian villages and towns and their population. They are a potential source of attacks on Palestinians.

The population of Beit Furik is about 15,000. There are some very beautiful homes in town which, as in other places, were built by family members who work and succeed abroad. Of the 28,552 dunams of land belonging to the town, only about 1,100 are residential. Most of the land is used for agriculture, especially olive groves, as well as to breed cows and sheep.

HARASSMENT: The olive harvest was rather small, so the families completed the olive picking quickly. In the previous winter, less rain fell, which reduced the olive production. A. said that there were no clashes nor critical harassments by settlers in the past few months. But farmers who have plots of land close to the settlement are afraid to work their land. And so in effect they have lost these lands.

Israeli soldiers come into the town at night and take men from their homes for questioning. During the last intifada more than 100 people from town were in military prisons, but now there are only a few.

CHILDREN: We asked how the children view the army and whether they are traumatized. A. admits that clashes with soldiers arouse feelings of hate towards them. When the situation is calm, the children are not afraid, but they certainly don’t like life in the Palestinian territories. In general they are not traumatized, but if in a family, one person is arrested by soldiers, then the brothers and sisters will be traumatized. The children and families get help from organizations like the EAPPI (Ecumenical Accompaniment Programme in Palestine and Israel, a Christian organization) and Doctors Without Borders.

A. has daughters who ask him questions about the political situation. “We have to reach a peaceful solution. Without that, we all have a problem, a difficult problem. While Israel has power, Palestine has none. There can be a deal: maybe one country for two people, maybe another solution. Without a solution the future seems bleak.”

EDUCATION: There are eight schools in Beit Furik, with 4000 pupils altogether. In the elementary schools the boys and girls learn together. After that they study in separate schools. One of the schools is new and opened this year, funded by a millionaire business man, who is originally from Gaza, but now lives in the United Arab Emirates. We asked why he chose Beit Furik as a place to build a school. He knows the Palestinian Minister of Education, and visited Beit Furik. He has funded two schools in Gaza  and two in Beit Furik;  one is named for his mother. Most of the high school graduates go on to study at university. But, as we often heard, few graduates find work in their field of study.

ELECTRICITY: This is not a problem now, but most towns and villages want to instal solar panels in order to be independent. This topic  reminded A. of Khirbet Tana, where they have no electricity, and their homes have been demolished. It sounded to us as if this is a neighborhood of Beit Furik. We decided to go there after we left A., but we didn’t realize the adventure we were in for.

Khirbet Tana. Mustafa drove 6 Kms. east out of Beit Furik and into the hills on a bumpy, unpaved, stony path. Soon we saw small herds of sheep and goats; in the hillsides, caves with tents in front of the openings. 100 to 200 people live in this small shepherds’ community. For centuries, they have used two springs in the area.

Though this community is on Beit Furik’s land, it appears on the map as Area C, but also as a military zone to train soldiers. Several times since 2005, their 40 homes have been demolished, rebuilt and demolished again. The tents they live in now may also be demolished.

In 2011 Khirbet Tana submitted a petition to the Israeli Supreme Court to stop this demolition and displacement process. They also demanded a master plan for the area in order to get building permits. Though the Israeli authorities have refused to recognize the existence of the community, they are still struggling to stay on their land. They suffer from a severe lack of basic services – no electricity nor gas,no plumbing, no roads, and no means of communications. 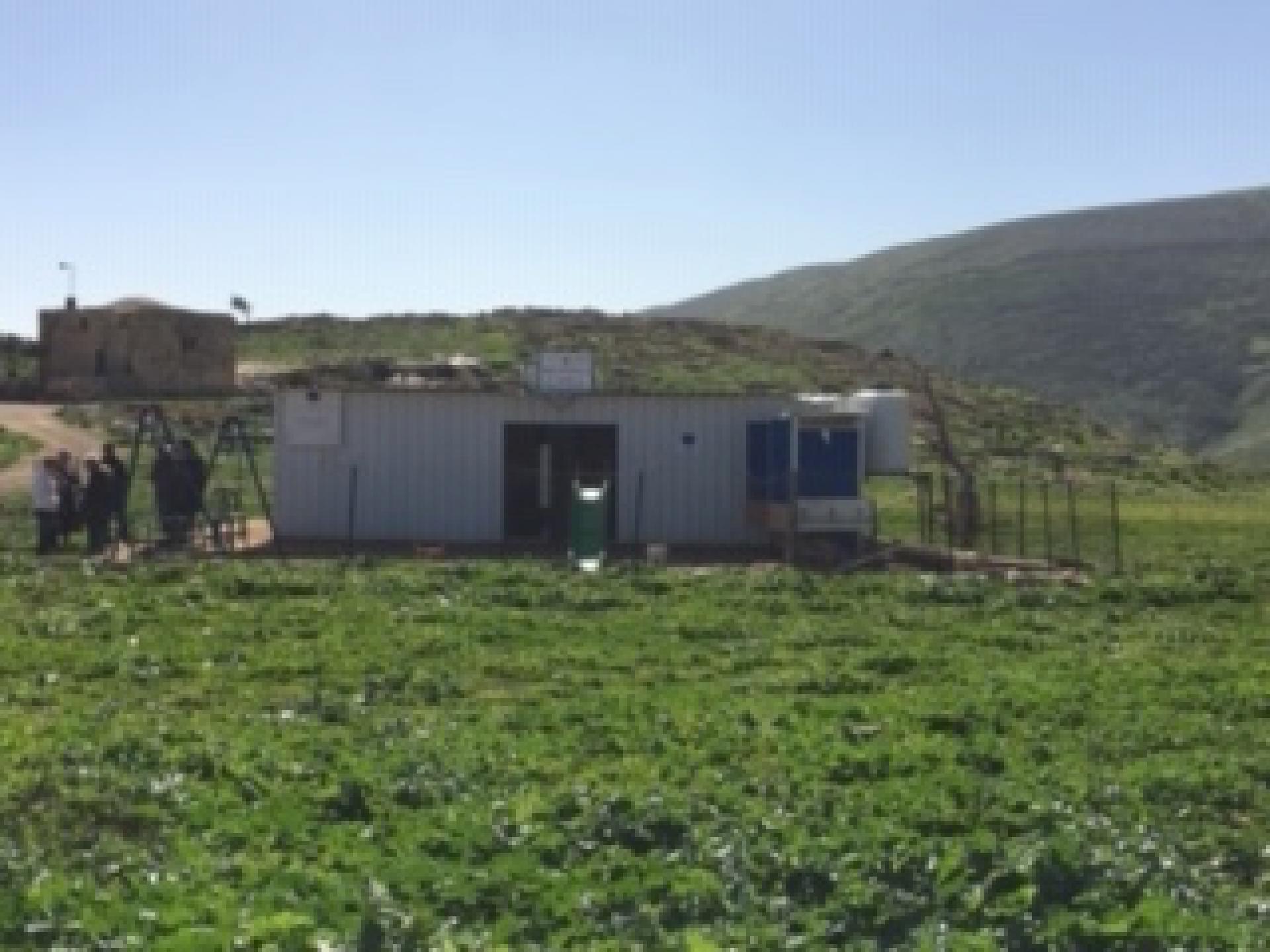 The kindergarten in Hirbet Tana, behind which is a mosque in an ancient building
Photographer:
Ana S

Mustafa pulled up next to a small white building built of tin siding. On the building is a sign saying it was built by an European Union agency. The building has a fence around it and a yard with swings and other play equipment. Two little girls, about 3 or 5 years old, were playing. A young woman and a man who came out to greet us are both teachers. The two girls also came near to see these strange visitors. The oldest girl was asked if she is afraid of the settlers. “No”, she answered, “I’m not afraid of them, but they come and take away our water.”

After this  pre-school and kindergarten for children ages 1 to 5, children go to Beit Furik schools. We were told that two to six children attend this pre-school daily. The 2 small rooms have low desks and small chairs, for about 8 children per room. I saw no toys at all. This isn’t a typical play area for such young ages. The young woman admitted they had no toys. I immediately thought of lego pieces, small colorful cars, and other toys in my closet, untouched by my grandchildren for 10 years.The teacher also said that they lack a heater for the cold winter.

An appeal for help. Machsom Watch members in the central region will meet soon. To this meeting could you please (1) bring toys your grandchildren no longer need, and (2) donate some money to buy warm blankets and clothes; (3) a volunteer with a car to collect donations and drive it all to Rosh Haayin Train Station. Please notify Aliyah S. or Ana S.

Close to the school, we saw several piles of cement slabs and other rubble staining the green fields. They are the remains of the school that was demolished, rebuilt, and demolished again.Why would the army demolish a school? Because it is in Area C.  A short walk from the school is a stone structure with an entrance arch; the door is closed. This mosque escaped the dire demolition orders, perhaps because of its archaeological value. 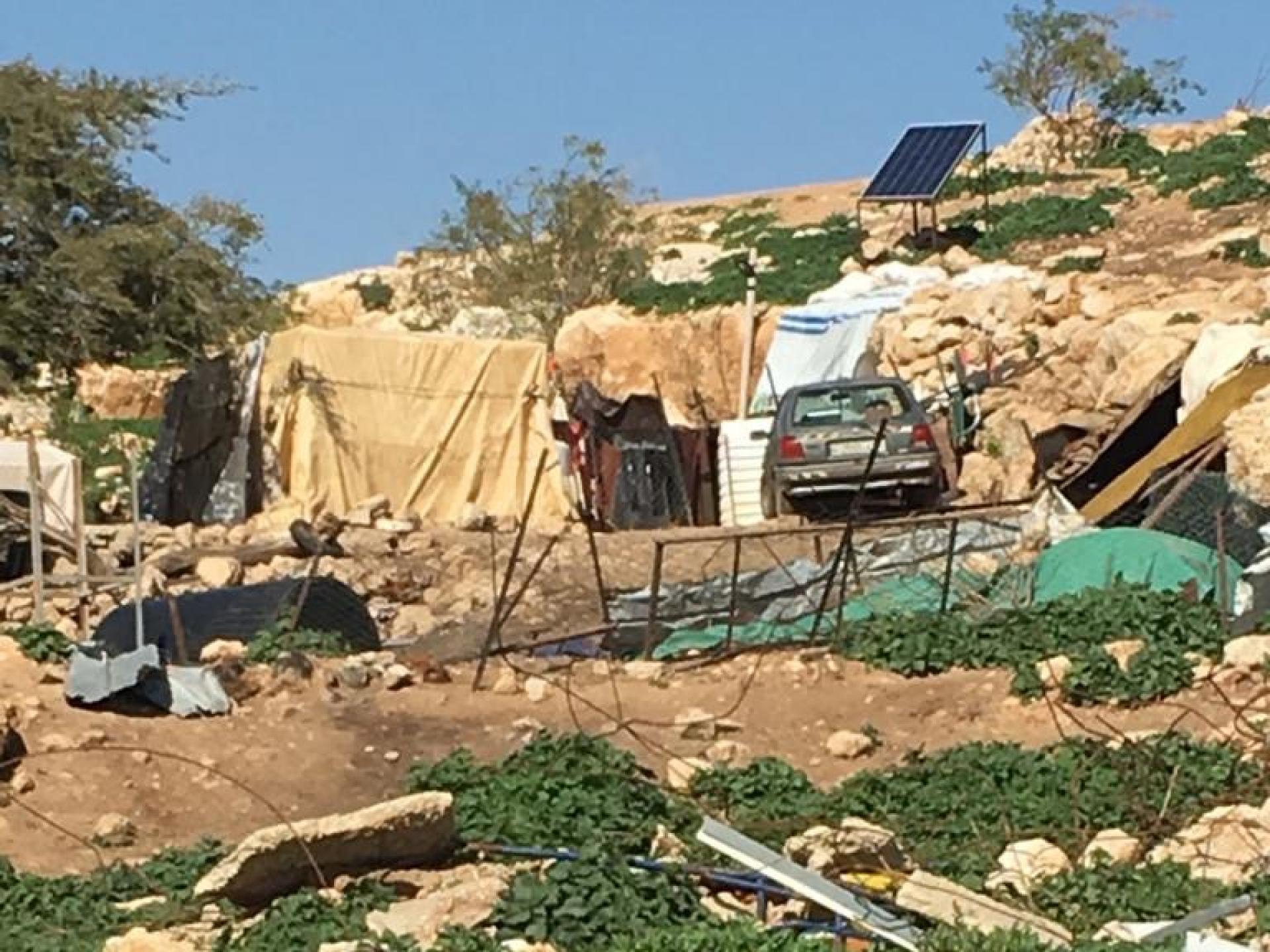 The spring in the hills above Khirbet Tana
Photographer:
Ana S

We then drive to a spring in the hills which has always supplied the shepherds with water – for their homes, their fields and their flocks. Settlers often come, we hear, to take over the spring and ‘swim’ there. We climb a steep, rocky footpath. At the top are two blue cement walls. On the floor is a cement trough, with water; on one side, is a faucet, on the other, a pipe carrying water to the shepherds in the valley. Two men are fixing something. We ask them, “Where do the settlers swim?” “They turn on the water and play around in it,” one says. Enjoying a nice ‘splash party,’  the settlers indifferently pollute the Palestinians’ precious water.

Mustafa fetches us by car avoiding the dangerous descent. We drive out of Khirbet Tana, noting again the sheep and goats, the tents, and the caves. As we leave this lovely, peaceful world of hills and green valleys, we notice mattresses and sofas drying in the sun.

We try to imagine how a family—exposed to cold, rain and heat, without gas or electricity, without heating or A/C, without any plumbing, smart phones or devices—copes in these tents and hillside caves.

How could our Israel—so proud of its high tech innovations, and selling them all over the world—have intentionally, as part of a well-thought out policy, push these unfortunate families thousands of years back into the Stone Age?

Yael Stein, “Fake Justice: The Responsibility Israel’s High Court Justices Bear for the Demolitions of Palestinian Homes and the Dispossession of Palestinians,” B’tselem, February 2019. Some of the data in this report is retrieved from “Beit Furik, Town Profile 2014,” The Applied Research Institute – Jerusalem. vprofile.arij.org/nablus/pdfs/vprofile/Beit Furik_vp_en.pdf