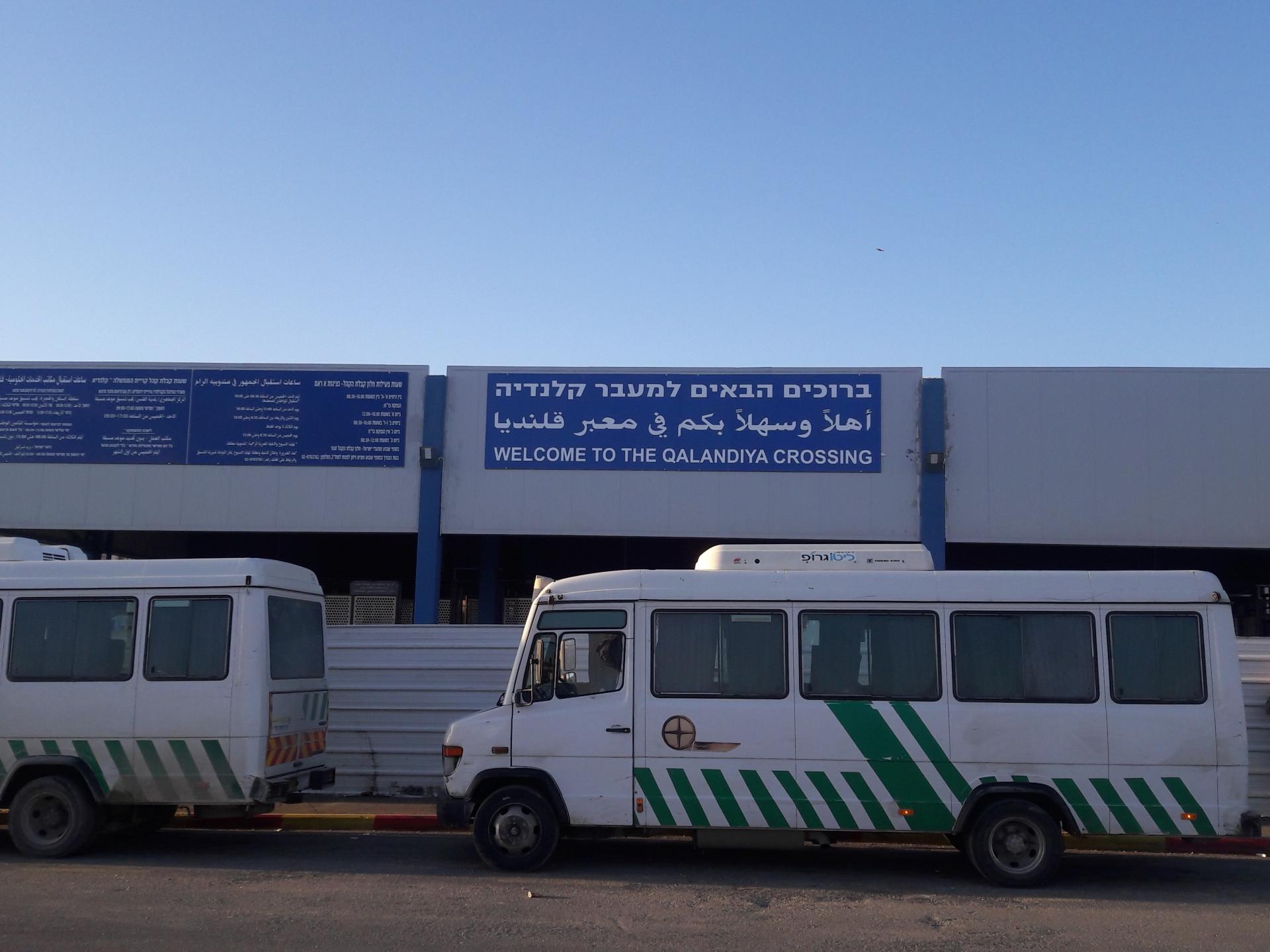 The new building at the Qalandiya checkpoint
Photo:
Ronit Dahan-Ramati

A sign with opening hours on the new building
Photo:
Ronit Dahan-Ramati

A shocking morning at Qalandiya; to cope with the pressure some people had to be admitted through a path bypassing the checking stations

05.15. Still dark. Groups are at prayer both near the parking lot and at the entrance to the checkpoint.

Inside the shed the falafel stall is open (apparently the police threat of a report doesn’t deter), and the beigel seller is present. The kiosk outsideis newer and smarter.

People enter through the turnstiles at the end of the three cages and wait in lines in the ‘slalom’ area where the route is defined by low barriers, for their turn at the five checking stations which today were all open.

At about 5.50, at one of the times that the turnstiles were opened there was a sudden rush at the entrance to the leftmost cage. This cage does not have a well- defined beginning and so is prone to have crowds coming from the side and trying to push into the waiting line. So, once again, within 2 or 3 seconds, the queues totally collapsed, there was just a pushing and shouting mob. And it took almost two hours (!!!) till orderly queues were once again formed.

Meanwhile many people had gathered at the Humanitarian Gate. When it opened they had difficulty making their way through the crowds at the checking stations and gathered at no.5 which moved slowly.

When pressure at the Humanitarian Gate eased, we went outside. We saw (beyond the metal barrier) that the new building is taking on final shape.  We saw large shining boards, with new notices:  “Welcome to Qalandiya passage” on one; on the other, information about opening hours of various services.

On our return inside we saw crowds once again at the Humanitarian Gate, and that an additional policeman and guards had arrived. At one point they admitted ‘regular’ workers through. Whenever women or other ‘entitled’ people arrived, the workers were asked to move aside to let them through. In the course of the morning, the blonde policewoman whom we have not seen for many months arrived.

The Humanitarian gate, which lets people avoid going through the cages, has a turnstile immediately beyond it. Then there is another gate which connects their lane to the checking stations. Normally when the D.C.O. officer arrives, a guard or policeman first opens this gate and then opens the Humanitarian Gate itself. Lately they have been standing just beyond the turnstile and checking documents there.

This time the policewoman stood at this entrance between the Humanitarian line and the checking stations, checking people’s documents. Women and the usual ‘entitled’ ones were directed to the checking stations. On the other hand, workers were led by the D.C.O. officer and a guard through this side route. Quite a few batches of people were let through this way. It was not clear to us what the criterion was for admitting these workers this way. We assume that these are Atarot workers getting preferential treatment. Perhaps their employers were  calling to protest that their workers were not arriving in time for work?