05.15. When we arrived on the Palestinian side the queues already extended out of the hut. 5 checking stations were open. At first the soldier operating the turnstile allowed only a few people through at a time, but later increased the flow and the lines got shorter. 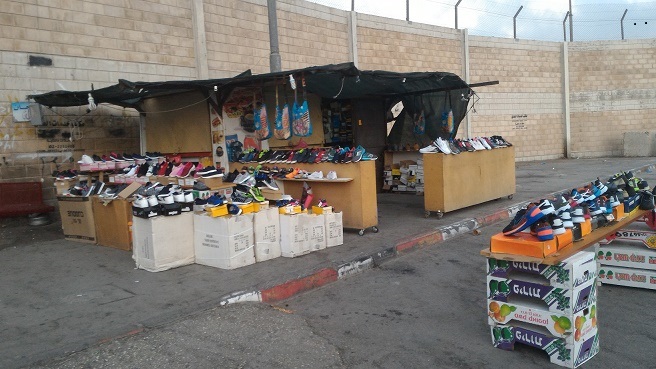 There are additional sales counters for Ramadan. The tea kiosk has been converted into a shoe shop, there are stalls selling toys, cell-phone gadgets. There were already one or two buyers, and one seller had apparently spent the night there on a bench with blanket and pillow. 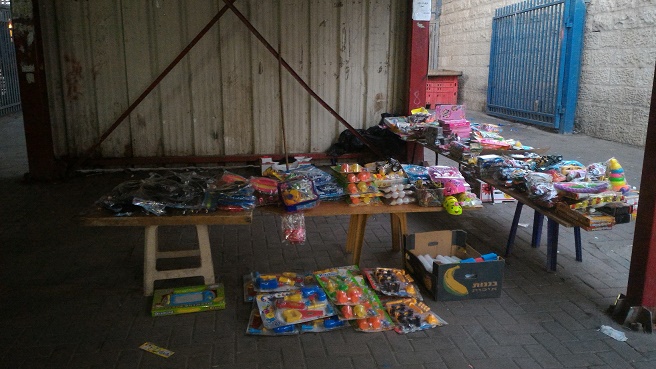 From time to time the lines got longer and shorter. The few women arriving merged into the lines. An elderly couple were also invited into the line. However, they were turned back at the checking station, told to return at 8, as they did not have permits.  Our friend, H., whom we hadn’t seen for a while, complained again about not being able to cross at Jib or Nebi Samuel checkpoints, close to his home. He has to waste time and money to cross at Qalandiya or Zeitim. We  chatted with two women from Nablus who were on their way to Al Aksa, the older one speaking English. 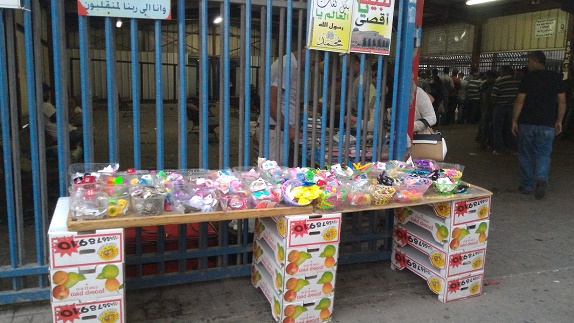 At 5.45, two policemen arrived. Towards 6 o’clock a DCO officer arrived with 2, apparently new soldiers, to be followed soon after by 2 security guards. The officer explains the setup to his soldiers, including “Say shalom to the Machsomwatch women,” and asks us how things have gone this morning. He also explains to them the difference between regular days and Fridays during Ramadan. Apparently they had been at Zeitim checkpoint last Friday. He explains that at Zeitim only a few people pass, while at Qalandiya on Ramadan Fridays, there are about 50,000 people. 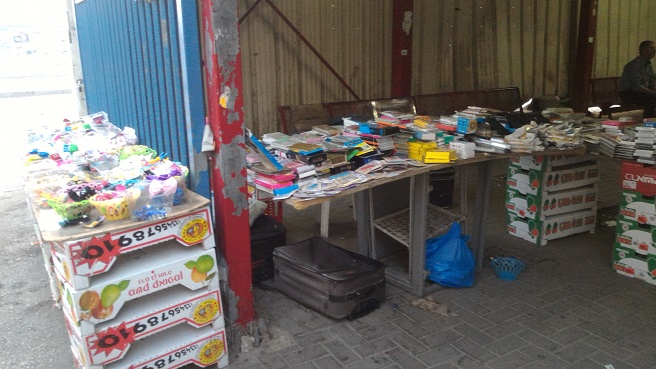 At this point the lines are very short. Nevertheless, the officer invites a man and woman who are ‘entitled’ to the humanitarian gate which he opens for them. He continues to open the gate from time to time.  He gives the impression that he himself is not altogether familiar with the arrangements and relies sometimes on a guard’s help.

At 6.30, when the lines looked as if they were finally short, we joined one. At the checking stations we met the two women from Nablus. They, too, had been told to wait until 8 o’clock.

Within 15 minutes we were out.