It’s extremely annoying that the Oranit checkpoint hasn’t opened.  It’s annoying because it forces many people to make a long detour to Checkpoint 1447, the Beit Amin agricultural gate.  The yellow bar is gone and it’s possible to turn left onto the security road.  The installation of fences atop the wall to the right of the security road has been completed.

05:58  Beit Amin.  We see from afar Palestinians warming themselves around a fire.  It’s still dark, and raining.

06:00  The MPs’ vehicle arrives and illuminates the gate.  Two soldiers address us politely, ask who we are and remind us that we’re not allowed to be here.  They don’t ask us to leave.

06:10  A military vehicle arrives and preparations begin for opening the gates

Our friend from the plant nurseries near Oranit approaches and introduces his wife.  We offer them a ride.  People coming from ‘Azzun ‘Atma return and ask why Oranit gate, which is closer to their village, didn’t open.  Every morning they pay NIS 20 for a taxi to the gate and an additional NIS 10 from the gate to the plaza at the entrance to Oranit, and the same amount on the way back.  NIS 60 per day for each farmer – a very burdensome expense.

Today they’re working in the greenhouses where they grow cucumbers.  To whom do you sell them?  To the owner of a stand in the Petah Tikva outdoor market.

Approximately 50 men and women cross quietly and in a very orderly manner on a wintry day and wait for a tractor pulling a trailer that will take them to the plaza at the entrance to Oranit.  They’re already at the checkpoint by 05:30, because they say the soldiers don’t arrive on time, so they come early in order not to miss the checkpoint opening.

06:55  The unit that closed the Beit Amin checkpoint is already here.  The first five people go through at 07:00 after being inspected.  Despite the rain, 65 people cross and about 30 vehicles – trucks, pickups and tractors.  And, of course, the schoolgirls’ midibus.

A man arrives on an electric bicycle that lacks a battery.  Where’s the battery?  He’s not allowed to cross through Habla with a battery, only with the bicycle, so he has to leave the battery at his place of work.  What ridiculous rules…

Hassan sits beside us – he’s worked for years as a gardener in Hod Hasharon.  Speaks fluent Hebrew.  He’s lost hope that anything good will happen in the region.  In 50 years we’ll meet here, he promises, and nothing will have changed.  I ask for his phone number, but he refuses.  He’s not involved in politics.

A woman waiting for her ride says she’s 51 years old, from Ras a-Tira, has worked 40 years in agriculture, in Yarhiv (in Israel) as well as on her land in the village.  She grows vegetables and raises sheep.  Her husband is a teacher, earns only NIS 3000 per month.  She’s the family’s principal breadwinner.  She displays her wiry hands.  No doubt about it, they’re the hands of an industrious woman.

A man waiting for his transportation tells us he’s worked many years in Ra’anana, for an Israeli who treats him fairly.  But if, like his son, you don’t have an employer who wants you, you’ll have to pay NIS 2500 every month to the employer or to a “crew boss.”  Half of what you make goes to someone else.  (I admit that I don’t completely understand.)

Roadworks by the roadside at the entrance to ‘Azzun from Highway 55.  They’re digging a rainwater drainage ditch on one side, an IDF armored military vehicle providing security across the road.  The workers are Bedouin from the Beersheba area. 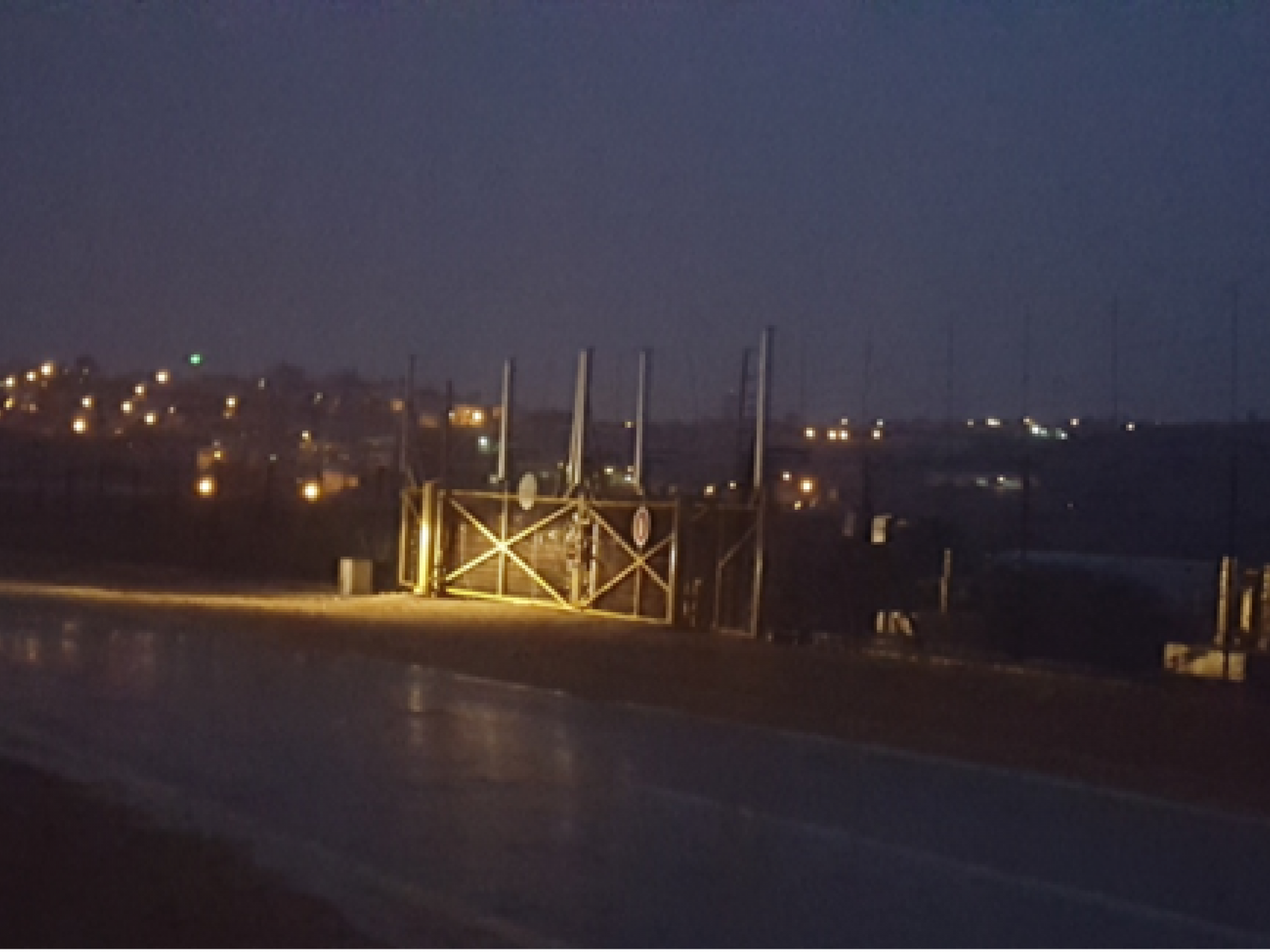 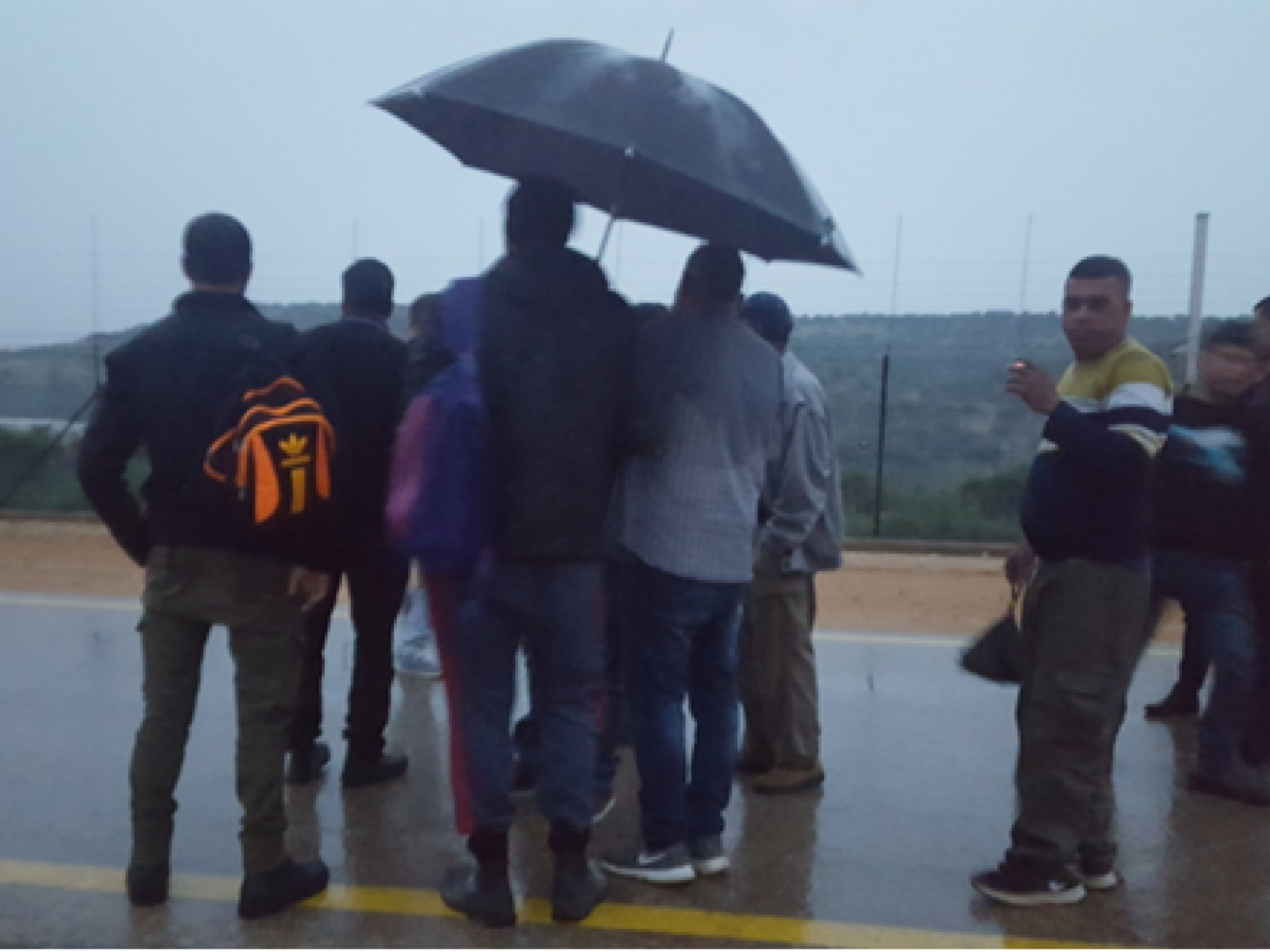 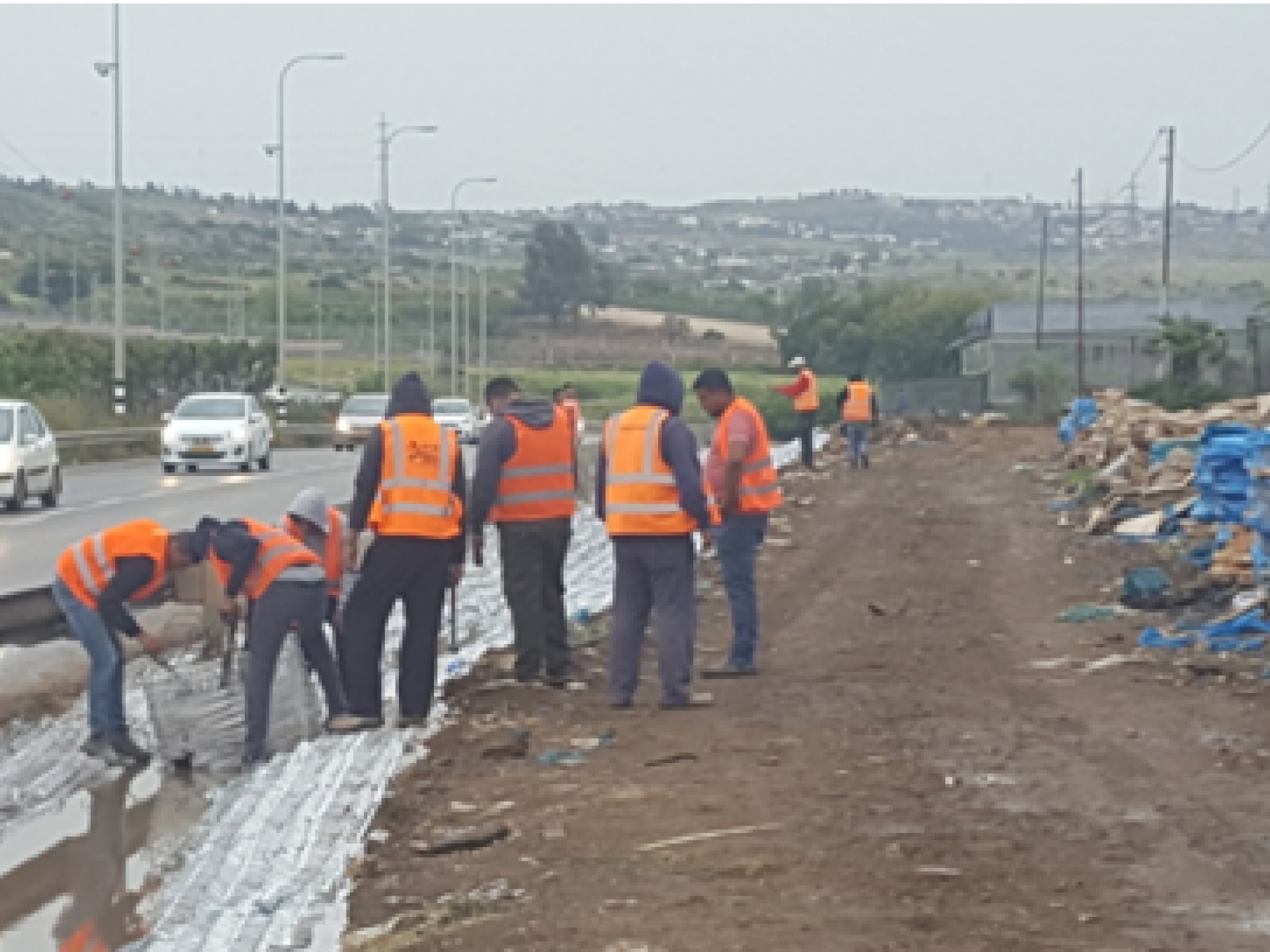 The workers are Bedouin from the Beersheba area
Photo:
Shoshi Anbar 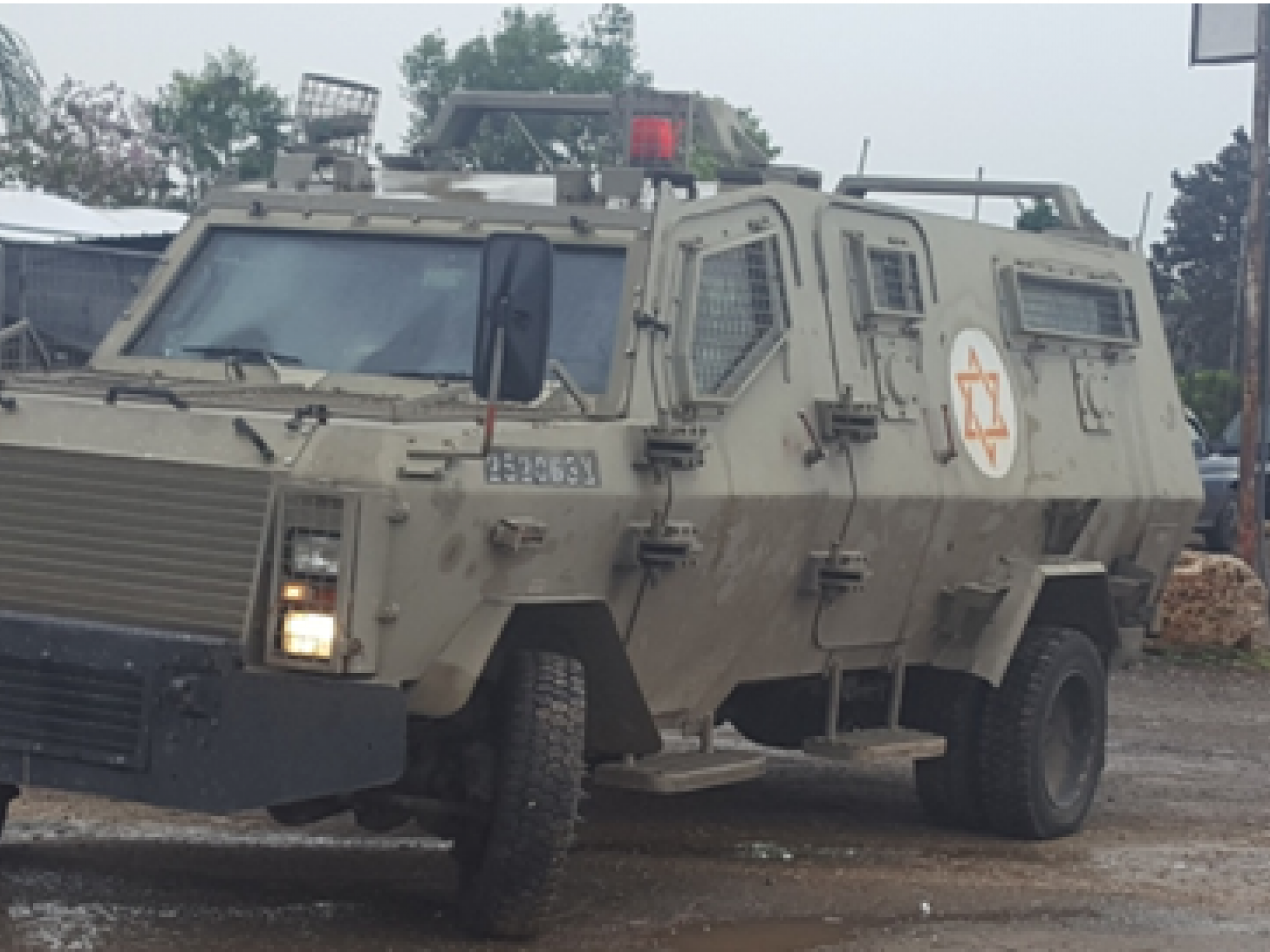 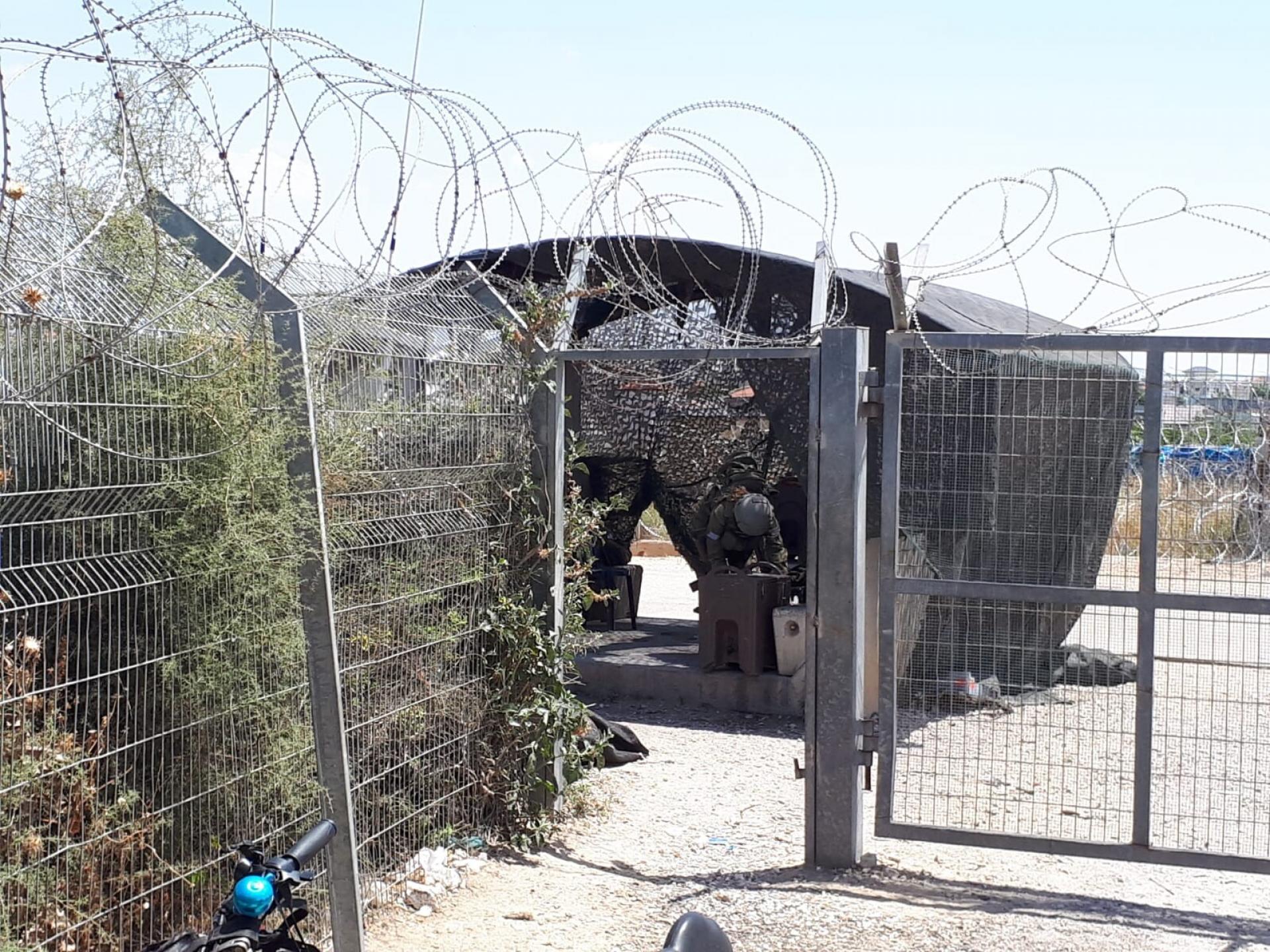