05 :30 – When we arrived at the CP we saw that a great crowd of vehicles and workers filled the whole parking lot and the square. On the Palestinian side, in the roofed lane, the queues were full of people who streamed inside. According to the planning of the regulation, the queue stopped from time to time, the turnstiles were closed and then opened again and the entrance was quick.

Around 6 o’clock we passed over to the side of the leaving people. To whoever hasn’t been in Irtah lately, many things seem new. The building has been completed. It is functioning. There is a zone for waiting, a cafe, building blocks which fence-in painted zones, for the "pleasure of the waiting persons”, a synthetic lawn and environmental sculptures, lit up in different places. The building for business meetings seems complete. Functioning?

According to a superficial impression, one could think that the place functions beautifully. An enormous amount of people. The Palestinians we asked quoted a number of 13000, but one cannot be sure. The entrance and the exit process seem quick. One doesn’t see on people’s faces impatience, stress or some other reaction of displeasure. If we wouldn’t have asked one could have assumed that a wonderful system of people handling was conducted here. Applause.

An elderly man who approached us stopped and around him many people assembled rather quickly. It was almost six o’clock, the queue of the incoming persons was empty, that’s to say all these thousands entered in two hours, and then we heard: 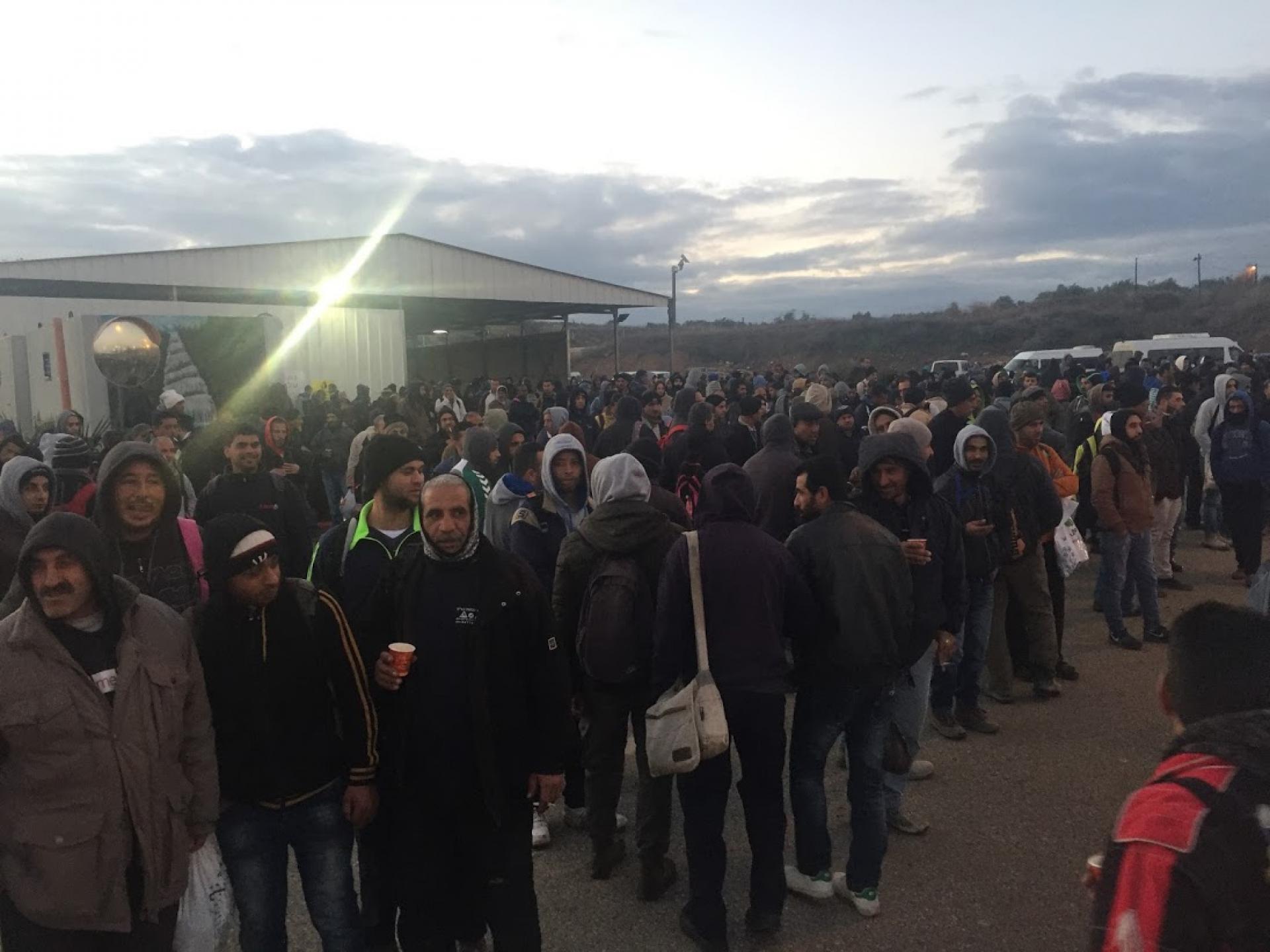 “Look at the people here. All these people have no work, have no contractor, they pay 2500 IS for a permit, or more, and wait. Perhaps they may have one day of work or two in a month”. So how do they manage? Inshalla, Allah Yassadana, and so… And another one comes and repeats the same things from a different angle. And everybody adds something. Many of thos we talked with come from the Jenin area, as there the CP is opened late and they hope that if they leave early they will arrive early. They complain about the passage at Jalame which is opened late and about the loss of working days owing to the necessity to renew magnetic cards. Every four years the cards have to be renewed, and then the service they get is sloppy and slow and takes a few days. According to their description one arrives at night, waits in the queue, and then only 10 people are accepted and the rest must return home.

I contacted DCO Jalame and asked how many magnetic cards they do per day and they say 100-300. I contacted DCO Gilboa where the workers pass. They said the gate is opened for workers at 4 o’clock.  It seems it is opened at a different hour for different kinds of workers (labourers, tradesmen, over 55 years old). According to him it is written on the Internet. At DCO Barta’a-Rehan all the workers can leave from 5 o’clock on.

They also tell us that there are about 3000 persons who get an permit for a week to look for work. Those thousands fill up the place and naturally compete for the scarce jobs available. Especially in the rainy winter days, when there is no demand for agricultural or building workers. They find themselves arriving in the middle of the night, leave the CP at five and then at six o’clock begin returning home. Some have merchant permits so the monthly payment to contractors doesn’t threaten them. They ask why the change which was planned wasn’t implemented. In July 2017 the amendment, according to which they were to be released from dependance on the contractors and would pay a certain sum (800 IS?) for entrance to Israel, was due to be implemented. But it was never done. Surely pressure by contractors or other influential persons.

The private cases arrived too (will arrive at Sylvia’s) – persons whose permit was taken from them suddenly and thus became prevented by the General Security Services, those persons to which the State owes money and never repays. 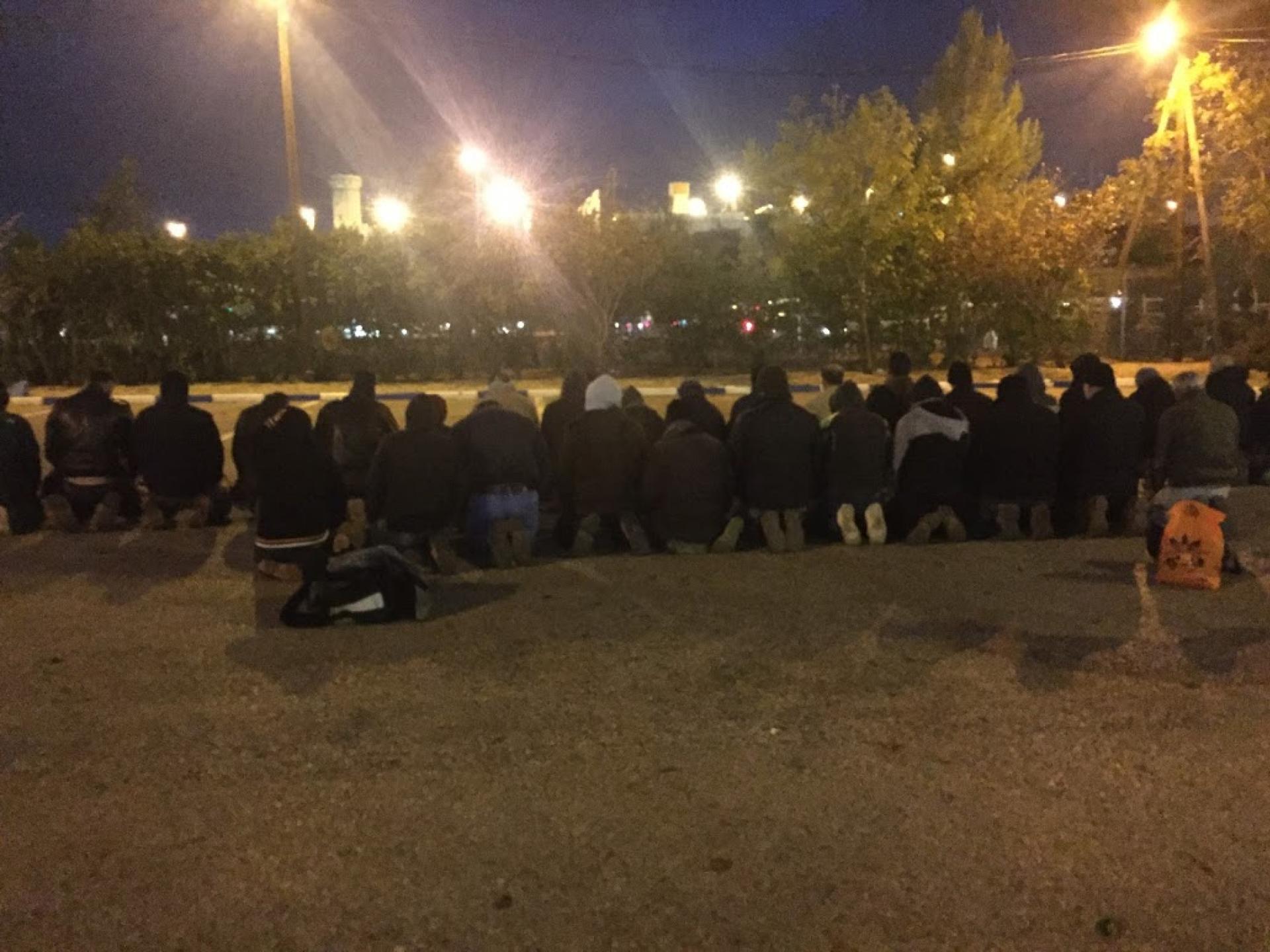 We saw rows of people praying, whispering, moving from above to a position of kneeling on the floor, calmly, people drinking coffee, small-talking ,waiting for transportation – while in fact the greater part of them returned home without having achieved anything which is terribly frustrating.

The big question is how they maintain a family of 10 children  (as one of the workers told us) from just a few working days per month.

06:30 When the sun rose we went to Azzun. The entrance to Azzun was shut with the yellow iron gate. Soldiers in a military vehicle stood there and defended the State of Israel. I asked whether there was another open entrance. They said yes, through Issla.  The entrance from Izbat Tabib in the direction of Azzun was also blocked until nine o’clock in the morning. According to the soldiers the main entrance is blocked already 4 days and will be blocked a long time. We asked why but were not answered.

We drove through Izbat Tabib and Assla and arrived at Azzun.  There we heard that since the strike and the demonstration last Tuesday, the main entrance to the village is shut. Thus the army enters and imposes terror as it wishes. The usual story of Azzun.

Apart from all this – everything is fine.