Why not recruit them directly to the settler-colonies 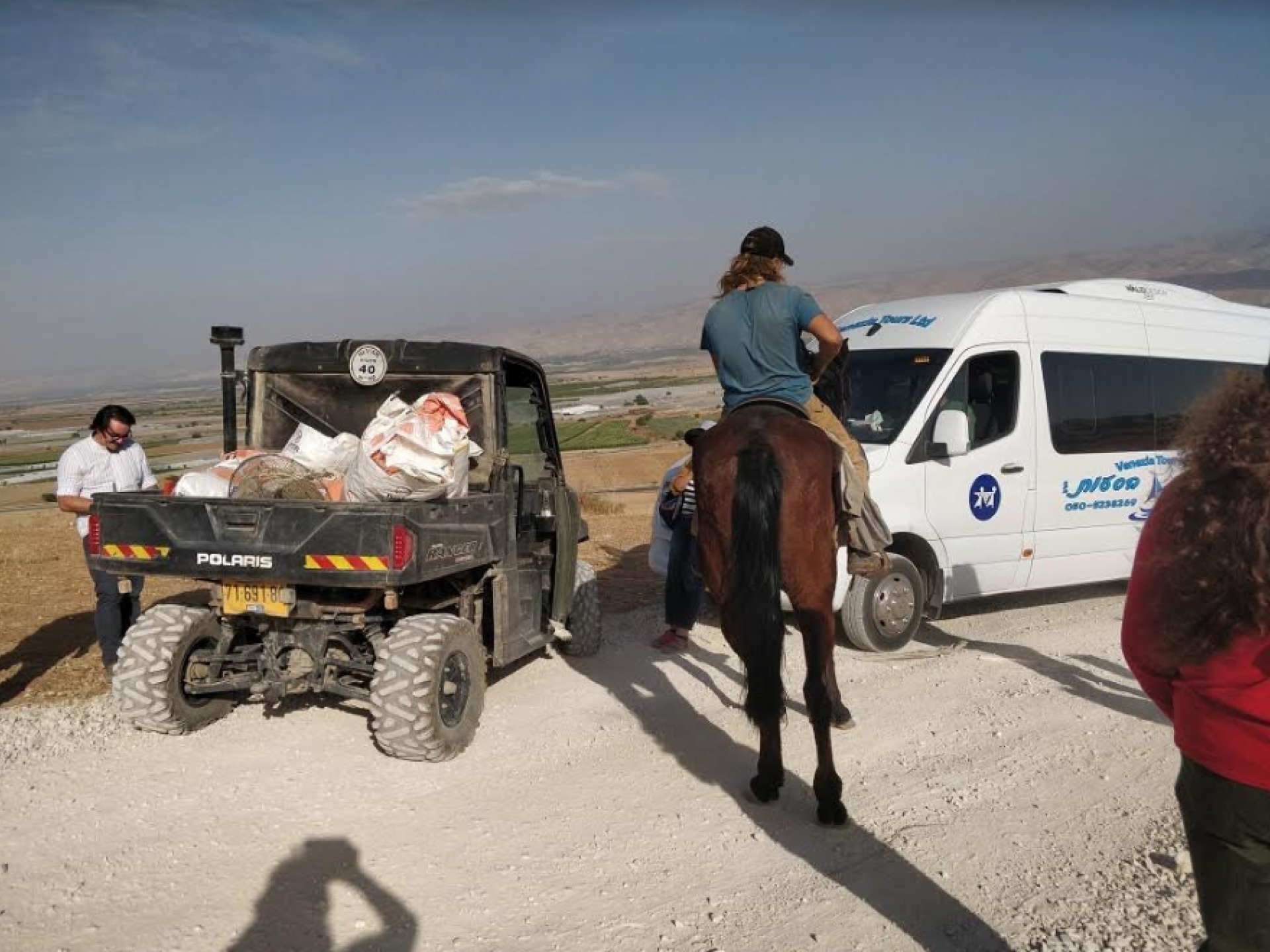 A mature settler and a hill boy block our vehicle 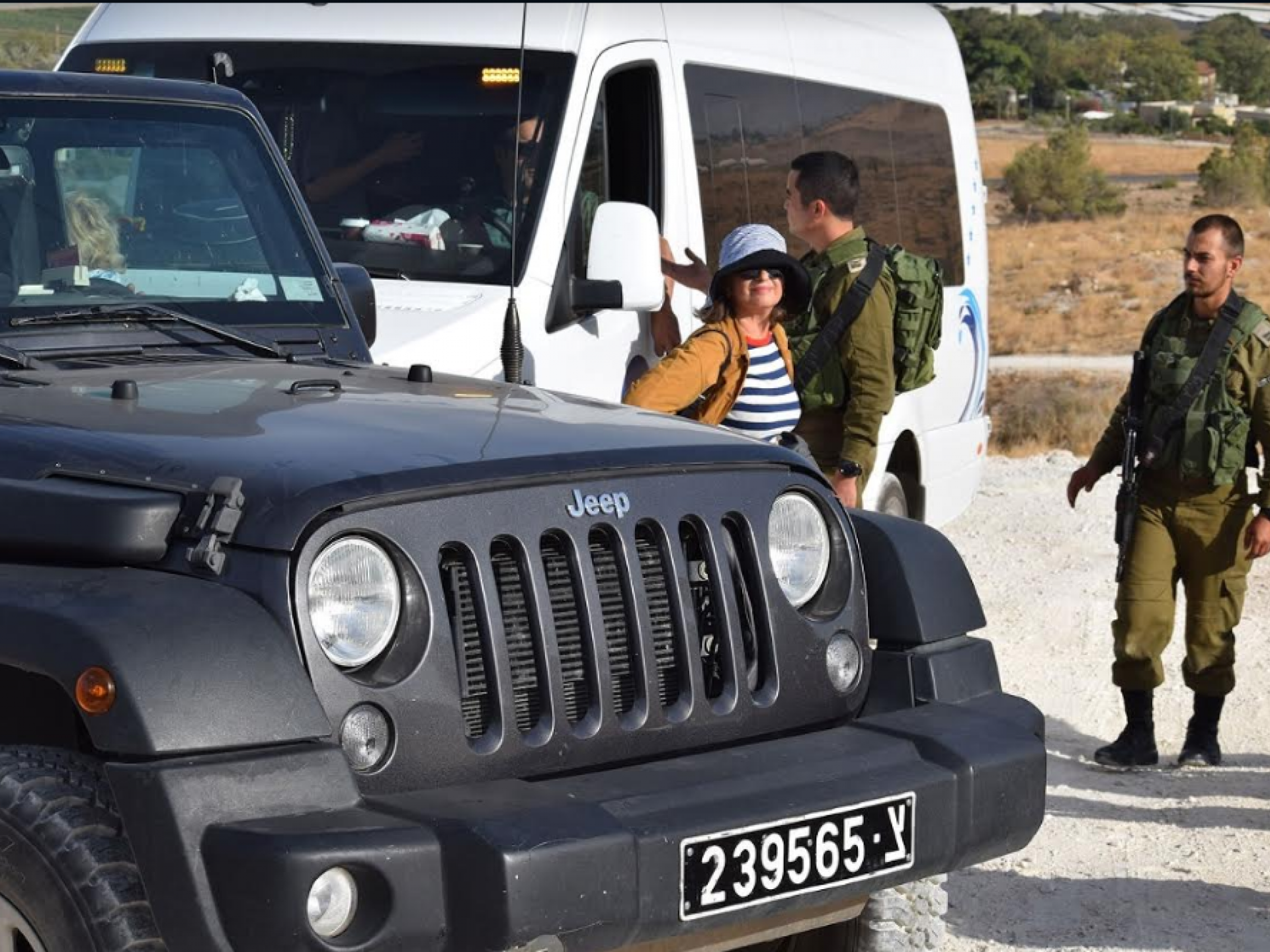 The officer requires the Arab driver an ID, not the woman next to him 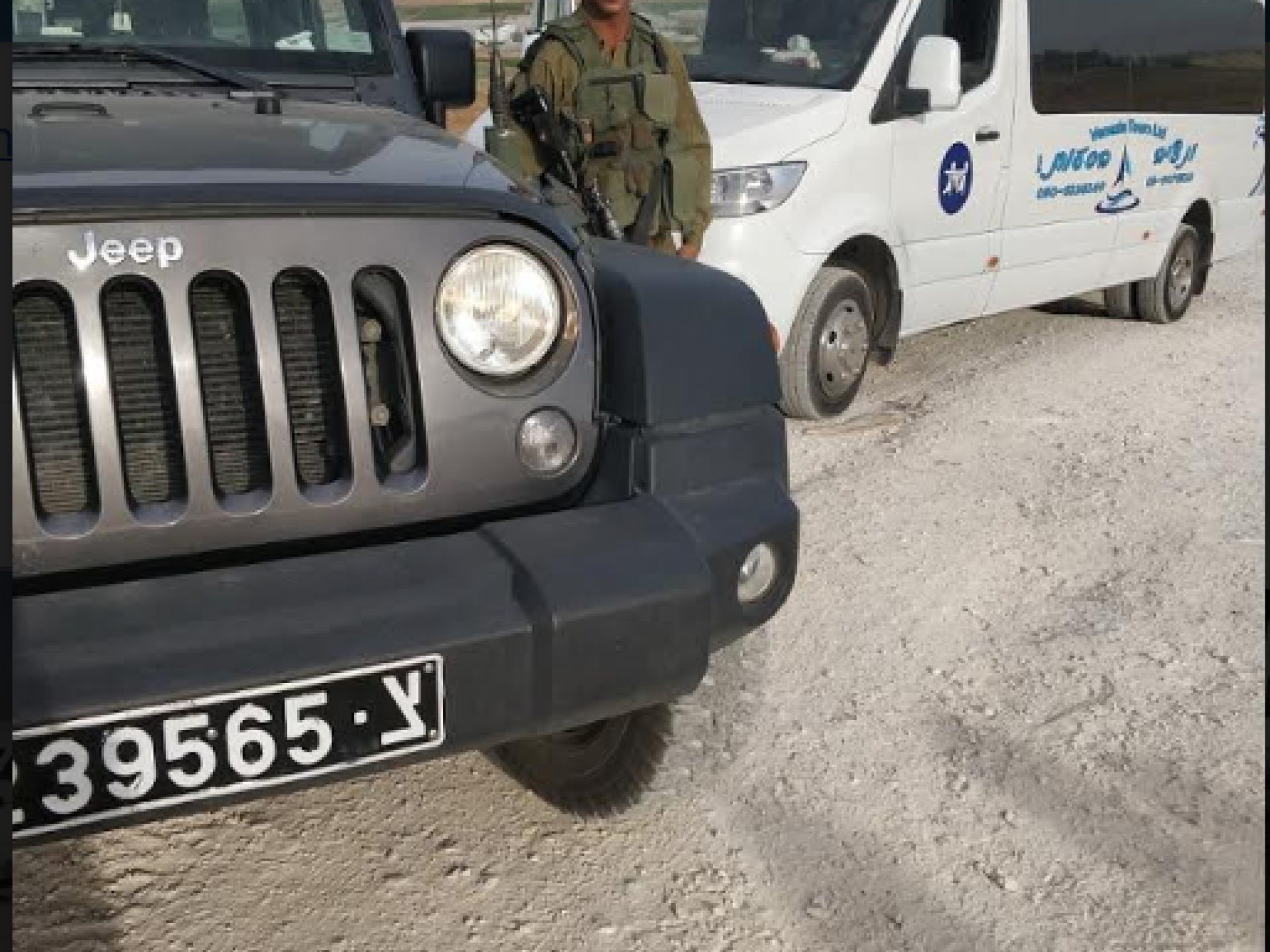 The military jeep replaces the settlers with blocking our vehicle

[Instead of a checkpoint report]

I brought along a group of Haaretz journalists to the Palestinian Jordan Valley to see the wonders of the Israeli occupation for themselves. Among other places, we ascended a hill in the northern part of the Palestinian Jordan Valley, to see how the law is NOT enforced here – how an illegal settler-colonist outpost that has been ordered by the court system to evacuate and cease all construction has been building more and more every week. Only this week a nice gravel track was paved to make easy access to it. About halfway up this track, a mini-tractor emerged from the outpost, driven by a side-curled young man without a skullcap on his head*– and blocked us. I asked him politely to make way. He did not even answer me, and used his phone to call for reinforcements. With incredible speed, as if waiting for him around the corner, 2 army jeeps arrived, from which 5 army captains, one major, and some other soldiers poured out. The entire operation was commanded by our acquaintance Gal Rubin who just a month ago accused me of trying to run him over. But this time we were accompanied by 11 journalists so he could not afford to make up tall tales. As soon as he arrived on the scene, I told him that Tzuri was blocking our way and that the army – as the body in charge here – should clear the way for us. I also said that we are willing to turn around and leave. We have already seen the outpost, even if from afar, and a warm lunch was waiting for us at a Palestinian home. But the instructions these officers received from the settler-colonist were different:

After a short talk with the said settler-colonist, the officer declared the site a ‘closed military zone’ and therefore we are detained. I said we are ready to leave although we have not yet been shown the appropriate order, for it is right now being prepared at the brigade HQ and would shortly be sent to him. We were not aided by the obvious fact that when we had entered the area it was not declared a ‘closed military zone’, nor the fact that we were surrounded by settler-colonists who were not detained at all.

As he stood there talking with me, he suddenly said “just a moment!”, and this little racist approached our Arab (citizen of Israel) driver and demanded to see his ID. Not of me, standing in front of him, nor of any other Jew standing around – go straight to the Arab! Only when we complained to him about this did he require the others as well to show their IDs. By the way, not all of them acquiesced, and he let them go. But at the end, he wouldn’t let us drive off without taking the Arab driver’s ID for a check – who until then had refused him.

For an hour-and-a-half we had been delayed without any legal grounds, by force of the settler-colonists’ instructions – they who are the true commanders of the Israeli army.